END_OF_DOCUMENT_TOKEN_TO_BE_REPLACED

Initially slated for release by Sony next month, Apple has picked up a WWII navy drama starring Tom Hanks called Greyhound that will stream on the company’s TV+ service. The movie that Hanks wrote was originally scheduled for theatrical release next month by Sony Pictures on Father’s Day weekend in the US. Instead, the film will debut on TV+. There’s no word from Apple yet about when Greyhound will become available to its subscribers.

According to Deadline, which broke the story:

For Apple, this is further indication the company is becoming a major player in features, as this marks its biggest picture commitment. The Apple TV+ slate includes Beastie Boys Story, the docus Dads from director Bryce Dallas Howard and the Sundance acquisition Boys State as well as On the Rocks starring Bill Murray, Rashida Jones and directed by Sofia Coppola. Streaming now is 2019 Sundance Film Festival selections Hala and The Elephant Queen. The service also premiered the George Nolfi-directed The Banker, which stars Anthony Mackie, Samuel L. Jackson and Nia Long.

With the COVID-19 pandemic closing movie theaters worldwide, movie studios have released many smaller-budget films straight to video streaming services. However, those movies have primarily appeared on multiple streaming services simultaneously. Greyhound is unique because it’s a big-budget film featuring a big-name actor, which will be available to TV+ subscribers only.

With the economic pressures facing the movie studios, video streaming is poised to play an even larger role in the industry. By picking up Greyhound, Apple has made it clear that it intends to play a leading role in the film industry’s evolving future.

As December comes to a close, now is the perfect time to reflect on how the year was spent, both with deep existential questions but also lighter, fun matters – such as surveying your TV and movie consumption over the year. Until recently I didn’t have a system I was satisfied with for tracking my viewing history, but now I’ve settled on Sofa.

END_OF_DOCUMENT_TOKEN_TO_BE_REPLACED

Most of the apps I cover for MacStories relate in some way to productivity, a theme that extends to the apps normally dominating my iPhone’s home screen. Writing and note-taking apps, task managers, communication apps, and tools like Shortcuts all help me get things done each day. However, sometimes what I want from my phone isn’t a productivity tool, but an app that specializes in something related less to work and more to fun. For example, a movie tracker. Kernel is a new app that does just that.

END_OF_DOCUMENT_TOKEN_TO_BE_REPLACED 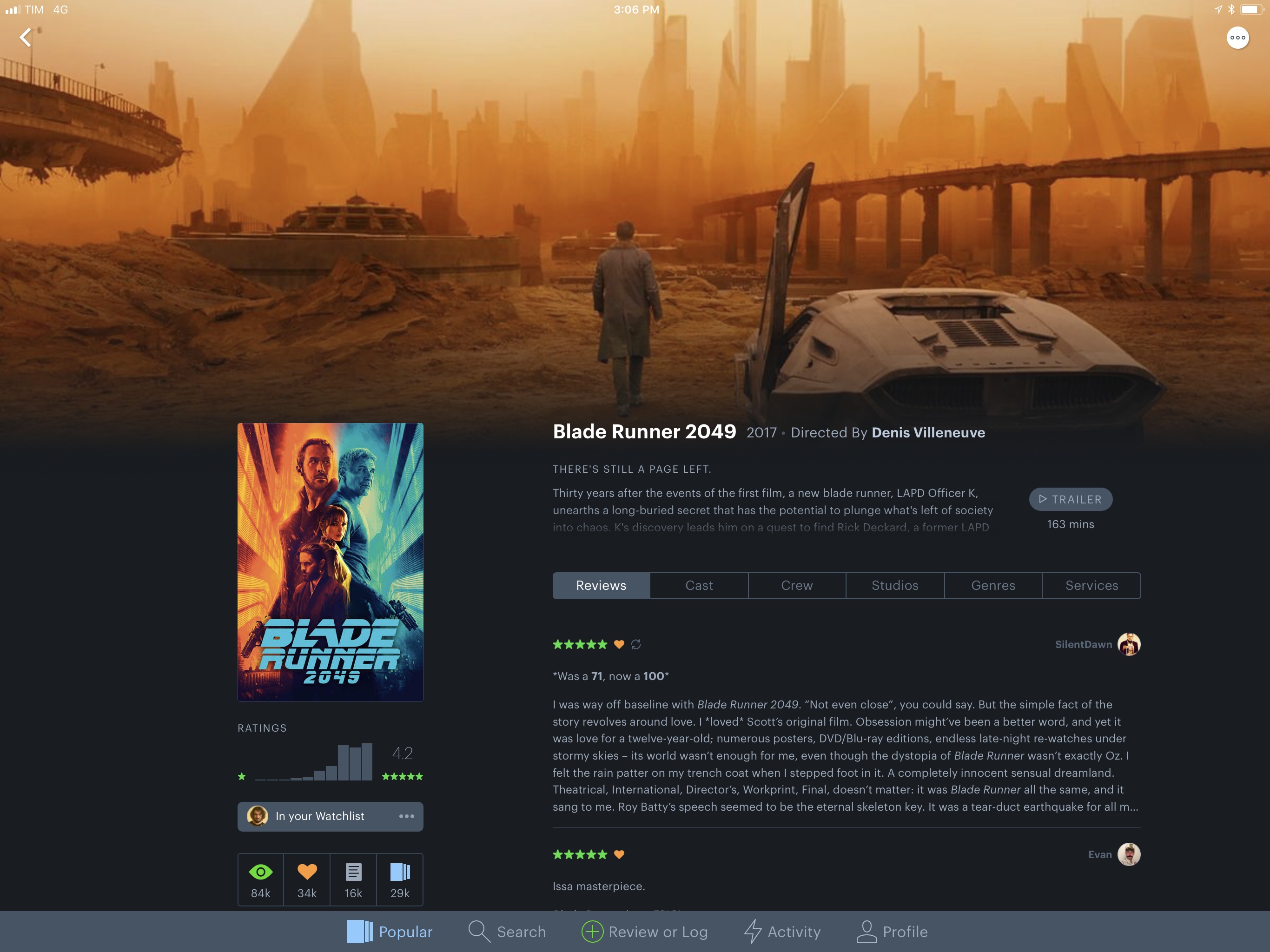 I’ve always been fascinated by Letterboxd, the popular service to catalog and rate movies you’ve watched, as well as share your appreciation for the art of film with other users in a social network-type environment. My problem, however, is that dedicating serious time to watching quality movies (instead of whatever is on TV) has mostly been an aspirational effort; I never truly attempted to make a list of films I want to watch and set aside a good chunk of time every week to enjoy them.

Among various “quality of life” improvements (which I briefly mentioned in this episode of Analog(ue) with Myke Hurley), earlier this year I decided to create an Airtable database with a list of movies I want to see, trying to tick one off at least every week. Since I started testing a beta of Letterboxd 2.0 for iOS last week though, I’m wondering if maybe now is the time for me to consider using a dedicated service to collect, rate, and discover movies.

END_OF_DOCUMENT_TOKEN_TO_BE_REPLACED 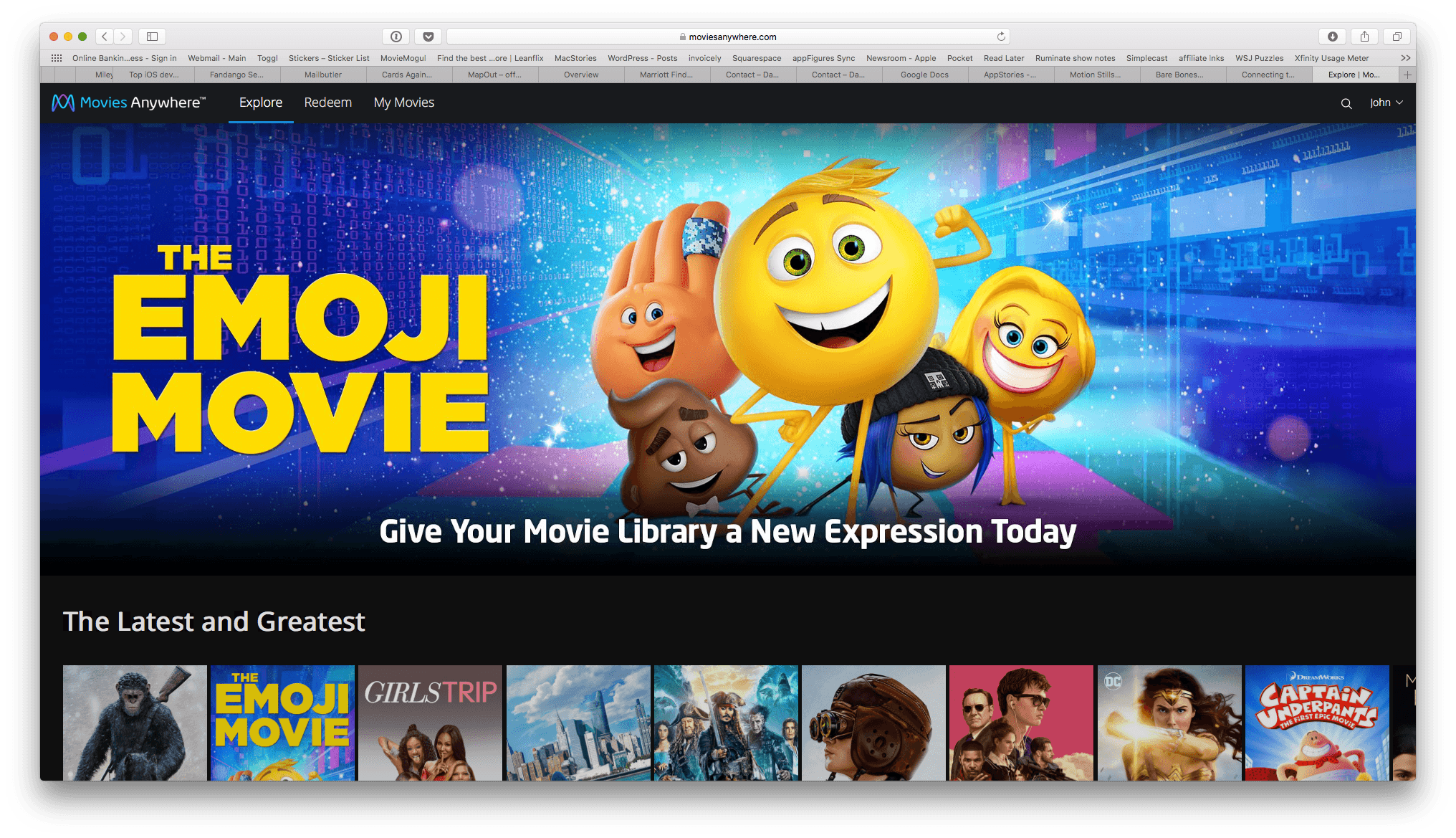 Services that promise to consolidate your digital movie collection in one place have come and gone over the years, so I was initially skeptical when I heard about Movies Anywhere, a new US-only service launched by Disney and other movie studios. However, after some preliminary testing of the service, I’m optimistic that Movies Anywhere stands a chance to become the first such service to catch on.

As reported by The Verge:

The big difference here is selection. Warner Bros., Universal, Sony Pictures, and Twentieth Century Fox have all signed on to Movies Anywhere. Along with Disney’s films, that gives the service a launch library of more than 7,300 titles.

Another differentiator with Movies Anywhere is platform support:

The promise of “buy once, watch anywhere” only works if a customer’s preferred device supports the service in question. The Movies Anywhere app will be available for iOS, Apple TV, Android, Android TV, Amazon Fire devices, and as part of Roku’s offerings. It will also support Chromecast, and titles will also [be] watchable through the service’s standalone website. And while apps for competing services have usually been clunky or awkward, the brief demo we saw of the Movies Anywhere app looked sleek and well-designed.

Movies Anywhere also gives customers the choice of where to buy their movies, though not without caveats on iOS.

Movies Anywhere will let customers browse for titles they’re interested in within the app itself, then allowing them to complete the purchase with their retailer of choice at the very end. (Android users will have the ability to purchase from Google Play, Amazon, or Vudu; those with Apple devices will only be able to purchase from iTunes, unless they head to a browser to purchase from a competitor directly.) 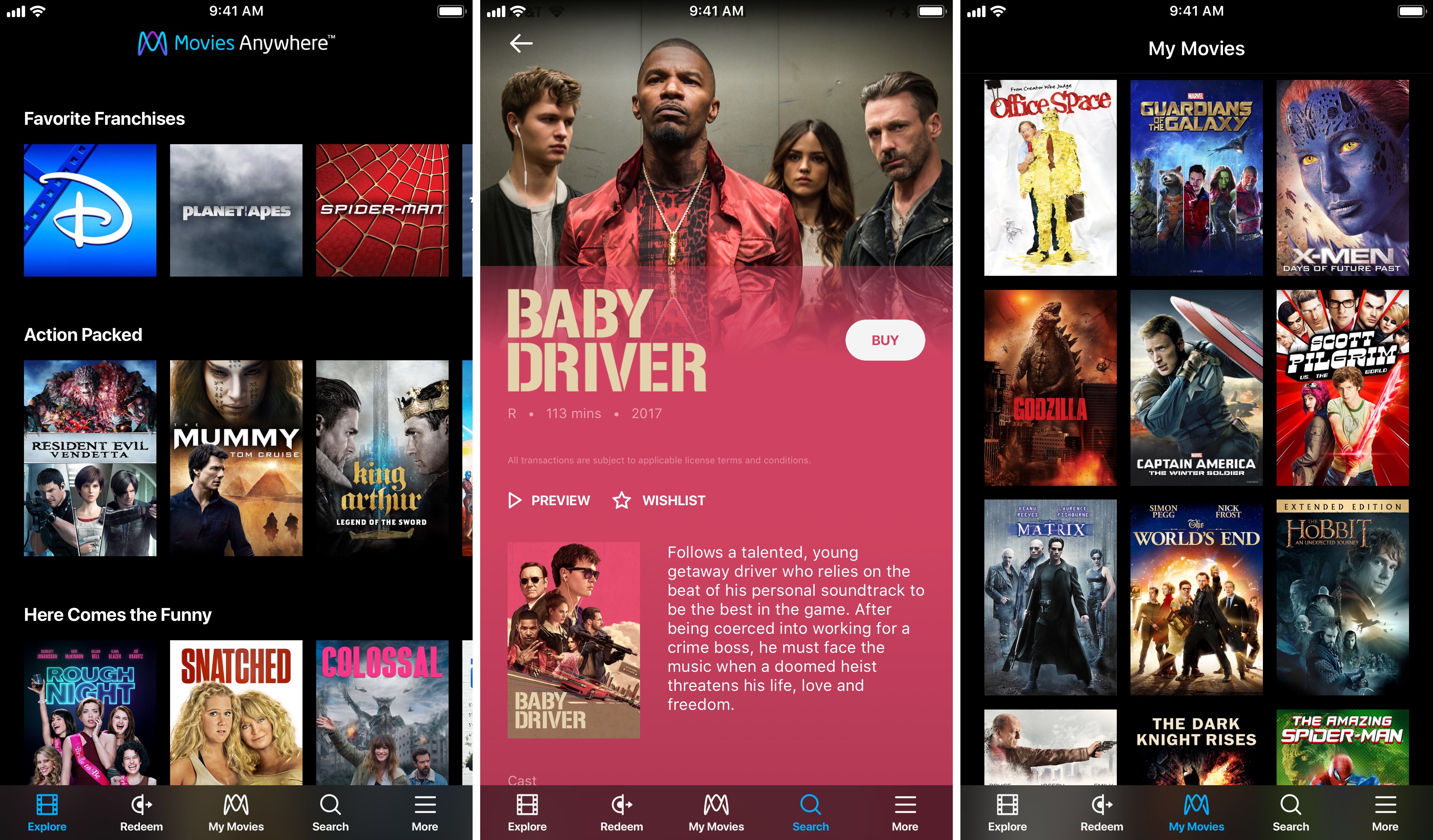 I tried to purchase a movie from the Movies Anywhere iOS app and sure enough, the only option was to buy it from iTunes. The workaround is to log into the Movies Anywhere service in Safari or another web browser, which will present you with the full menu of purchasing options. One other limitation that affects all platforms is that Movies Anywhere does not tell you how much a movie costs on each service. If you’re looking for a bargain, you’ll have to follow the link to each service to see how much they charge.

In the limited time I’ve had to try Movies Anywhere, I’ve been impressed. Logging into iTunes and Amazon Prime Video was quick and easy, and the movies I own on both providers showed up almost instantly in the iOS app and on the Movies Anywhere website. Playback happens in the Movies Anywhere app in a player that supports subtitles, closed-captioning, AirPlay, chapters, 15-second skipping ahead and back, and the option to pick up where you left off or start over if you exit the player. If Movies Anywhere can continue to grow its library of titles, the promise of all your movies anywhere you want them may finally become a reality.

Movies Anywhere is available on the App Store (US only).

In the aftermath of Apple’s announcements earlier today, it released an update to iTunes with a new feature described as rent once, watch anywhere. The release notes for iTunes 12.6, which is available as a free upgrade on the Mac App Store, say:

Now you can enjoy your iTunes movie rentals across your devices with iOS 10.3 or tvOS 10.2.

With this new feature, you should be able to start a movie rental on an iOS device and finish it at home on an Apple TV for example, which is a welcome change to what was an overly inflexible system.

iOS 10.3 and tvOS 10.2 are currently in beta but are expected to be released soon, at which time this new feature will be available to everyone who upgrades to those versions of the OSes.

Speaking of the Apple TV, the app I used to stream movies to my television wirelessly was Infuse. Developed by FireCore, Infuse is a good-looking video player with support for multiple formats, Dolby Digital Plus sound, integration with the TheMovieDB and TheTVDB for metadata, and AirPlay.

I wasn’t interested in features like trakt, social sharing, or subtitles – I just wanted an easy way to stream videos from my iPad to the Apple TV without loss in terms of quality and smoothness. I downloaded Infuse, connected the iPad to my Mac (my movies are on an external drive), and used iTunes’ file manager to drop files into Infuse. Seconds after the copy was finished, Infuse would see the video, collect metadata, and display a gorgeous artwork preview with cast information and technical details on the file.

To stream videos with AirPlay, you need to unlock the $4.99 “Infuse Pro” In-App Purchase, which I bought immediately and didn’t regret. I gave Infuse various formats including MKV and AVI at both 720p and 1080p and streaming to my second-gen Apple TV was always smooth and fast.

I’m impressed by Infuse because, once it had my videos, it didn’t require me to fiddle with any setting or file conversion – it just worked with AirPlay and videos looked great. Infuse is free on the App Store and you can read more about supported formats (for video, audio tracks, and subtitles) here.

But the script abandons these elements almost as soon as they appear, and the movie makers’ focus returns to marking off spaces on the Steve Jobs biography bingo card. Jobs sitting enraptured during a class about fonts? Check. Jobs tricking Woz out of his share of a bonus for developing Atari’s Breakout? Check. Jobs showing off the “1984” Macintosh commercial in its entirety? Check and mate. “This is like a video Wikipedia entry,” my colleague Armando Rodriguez told me after we finished screening the movie. That’s a harsh but not entirely inaccurate critique.

This is a common critique I’ve read in other reviews of Jobs as well. It would have been great to have something more than a documentary of Steve’s life and mannerisms starring Kutcher. I’ll still watch the movie, but I’m hoping Sorkin’s take will be something different and deeper.