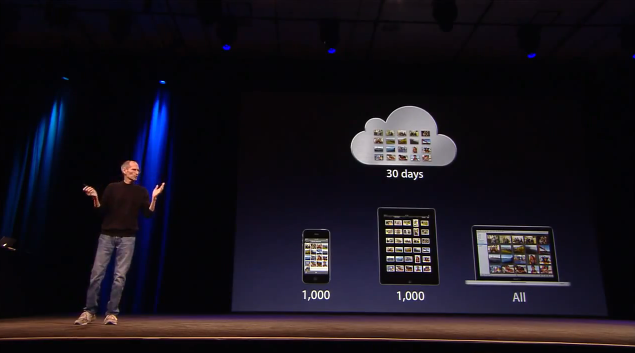 One of the new features of iCloud that was announced at WWDC but was slightly overlooked by bloggers and iOS users is Photo Stream. Built into the native Photos app for iOS devices, iPhoto for Mac and the Pictures folder on Windows PCs, Photo Stream will allow you to automatically find on any device the photos you’ve taken on an iPhone, iPod touch or iPad. With the addition of the Apple TV 2nd gen, Photo Stream will let you watch these photos on the bigger screen with your friends and family. How does it work? For those that missed the announcement, here’s a quick recap: because iCloud automatically stores, updates and pushes your content on all your registered devices (be them iPhones, iPads, or Macs and PCs running the iCloud control panel), Photo Stream acts as an extension of the mobile Camera Roll that, rather than just storing pictures locally, also pushes them to the cloud as soon as they’re taken, provided you’re on a WiFi connection. If you’re not on WiFi, Photo Stream will upload the photos from the Camera Roll to iCloud as soon a a new connection is established.

As explained by Steve Jobs on stage, and later demoed by Eddy Cue, the main purpose of Photo Stream is that of easing the process of importing photos shot on, say, an iPhone to an iPad or Mac for better viewing. With previous versions of iOS, users were forced to email pictures themselves and open the message on OS X to save the photos (facing at the same time a risk of quality loss due to email limitations); create an account on social services like Flickr or Facebook to upload photos from their mobile devices to avoid a desktop transfer process; even worse, users had to go home, find a USB cable, connect their iPhone to a computer, launch iPhoto or Image Capture and manually import the most recent photos. That’s a long and tedious process Apple wants to eliminate with a smart, automatic system that always puts the most recent photos on all your devices. In fact, Photo Stream can display the 1,000 most recent photos on iOS devices, whilst files are stored on iCloud for 30 days due to storage limitations on both ends (iOS and Apple’s server farms). On desktop computers, which come with more storage, Photo Stream stores all photos. Again, this new functionality works out of the box with any iOS 5 device configured with an iCloud account, and Photo Stream can be enabled in the Settings app. On the desktop’s side, right now Apple is requiring developers to download a special beta version of iPhoto and the iCloud control panel to test Photo Stream, but once iCloud publicly launches this fall everything will be baked in with no further configuration needed.

I’ve been testing Photo Stream (alongside the new OSes and iCloud features) over the past few weeks, and I’ve realized this new kind of photo integration with the cloud is one of the things I’m most excited about and looking forward to try out with my family this fall. As seen at WWDC, Photo Stream is instant and doesn’t require any user interaction: once the photo is saved locally, it also begins uploading to the cloud. This plays an important role for Apple and its users, for two reasons: it makes the OS feel easier to use, almost like magic; it cuts the need of a USB cable following Apple’s renewed “PC-Free” initiative. A user that doesn’t need to understand how things work – yet is satisfied with the results – is a happy user engaged with the platform; a platform that has users’ engagement is something other people will likely look at as a solution to their needs.

For photos, Photo Stream provides the simplest solution to a common problem: “how do I get these pictures from my phone onto my computer?”. The answer is, you don’t need to. iCloud will, because the truth is in the cloud and the system knows what to do with the pictures coming from your iPhone or iPad. But then again, the average user (by my definition, the user that wants a new phone, walks into a carrier’s store and decides to finally get the iPhone he saw in TV commercials or being used by his friends) won’t even know how iCloud stores & pushes content: in fact, Apple’s presentation at the WWDC was unnecessary for the most part, as it was targeted at geeks and developers needing the usual explanation of things with animated arrows and moving pictures (just watch the video). Most users won’t need to know how .jpeg files travel across flash memory, through WiFi antennas, to the cloud and back to a hard drive. They’ll just know that an Apple account (the one you’ll be able to create once you take an iOS 5-enabled device out of the box) allows you to keep your personal stuff everywhere. In fact, some people may even think this new Apple account/iCloud thing works like an operating system.

But back to Photo Stream. How does this relatively minor announcement (after all, it’s just for photos) fall in line with Apple’s grander cloud plan? The pictures of your vacation in Italy will be there on your iPad or computer when you get back; the photos you’ve taken today in the backyard with your kids will be there, too. If you’re a geek, or a blogger, and you take several screenshots of your devices’ apps and homescreens every day, those files will be there on your computer’s iPhoto when you need them. Personally, the possibility of taking a screenshot for an app review and finding it after a few seconds on my Mac has completely changed the way I used to write a blog post, and then think about the pictures. Now, I don’t have to think anymore because iCloud has become the new brain behind my photos.

Photo Stream may not generate the same amount of buzz new features like iTunes Match and Documents in the Cloud do, but in the long term, I believe it will become one of those additions to the desktop and mobile OS that, two years or maybe less from now, will make us wonder why it took so long.