I’ve got some good news and some bad news for you about Shortcuts on the Mac. First, the good news: Shortcuts is in much better shape than it was this time last year. Now for the bad news: There are virtually no Shortcuts updates to be found in macOS Ventura. That’s disappointing but not unexpected, given how much time was undoubtedly taken during the past year to fix the bugs with which the first version shipped. 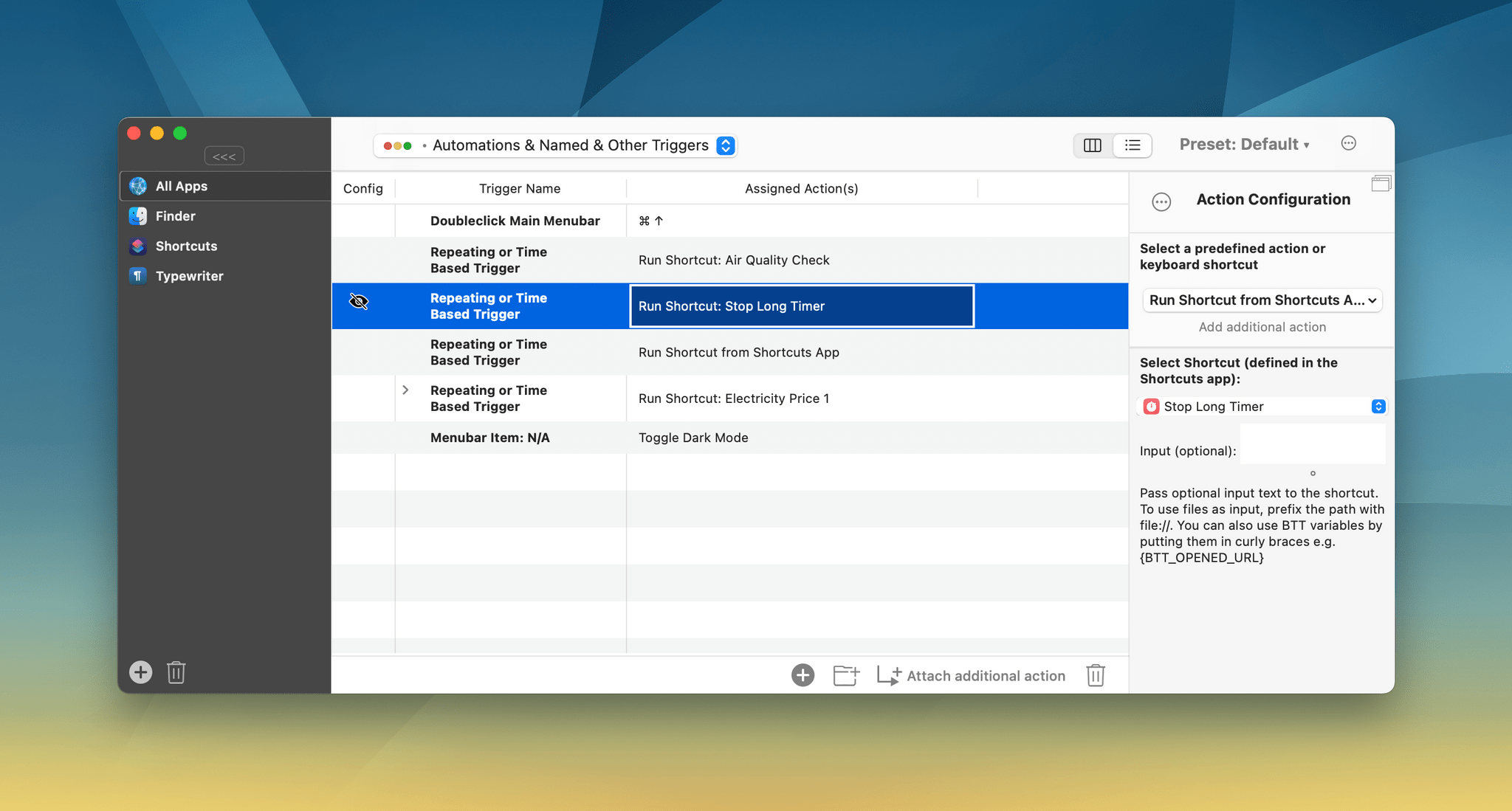 Apps like BetterTouchTool have picked up where Shortcuts has come up…short.

If there’s a silver lining, it’s that third-party developers have filled the gap. As I wrote in the macOS Monterey review last year, the extent of their support of Shortcuts for Mac was unclear. Some developers of existing automation tools were diving in head first, while others seemed to be sitting back to see what happened. But in relative short order not only did long-time favorite Mac automation apps like BetterTouchTool, Hazel, and Keyboard Maestro support Shortcuts but so did launcher apps like Alfred, LaunchBar, and Raycast. When you add the long list of developers who got their start on the iPad and had actions ready and waiting in the wings for the Mac versions of their apps, there was plenty to keep Shortcuts fans busy in 2022.

However, as much as I’ve enjoyed exploring what developers have done with Shortcuts on the Mac, I’ve kept a close eye on the app itself and especially its system integrations. One of my chief criticisms of Shortcuts on the Mac was its lack of support for the Mac’s share menu. Shortcuts shipped with a long list of ways to access shortcuts, many of which aren’t possible on iOS or iPadOS, but the lack of share menu support was still surprising given how important it is on those other platforms. 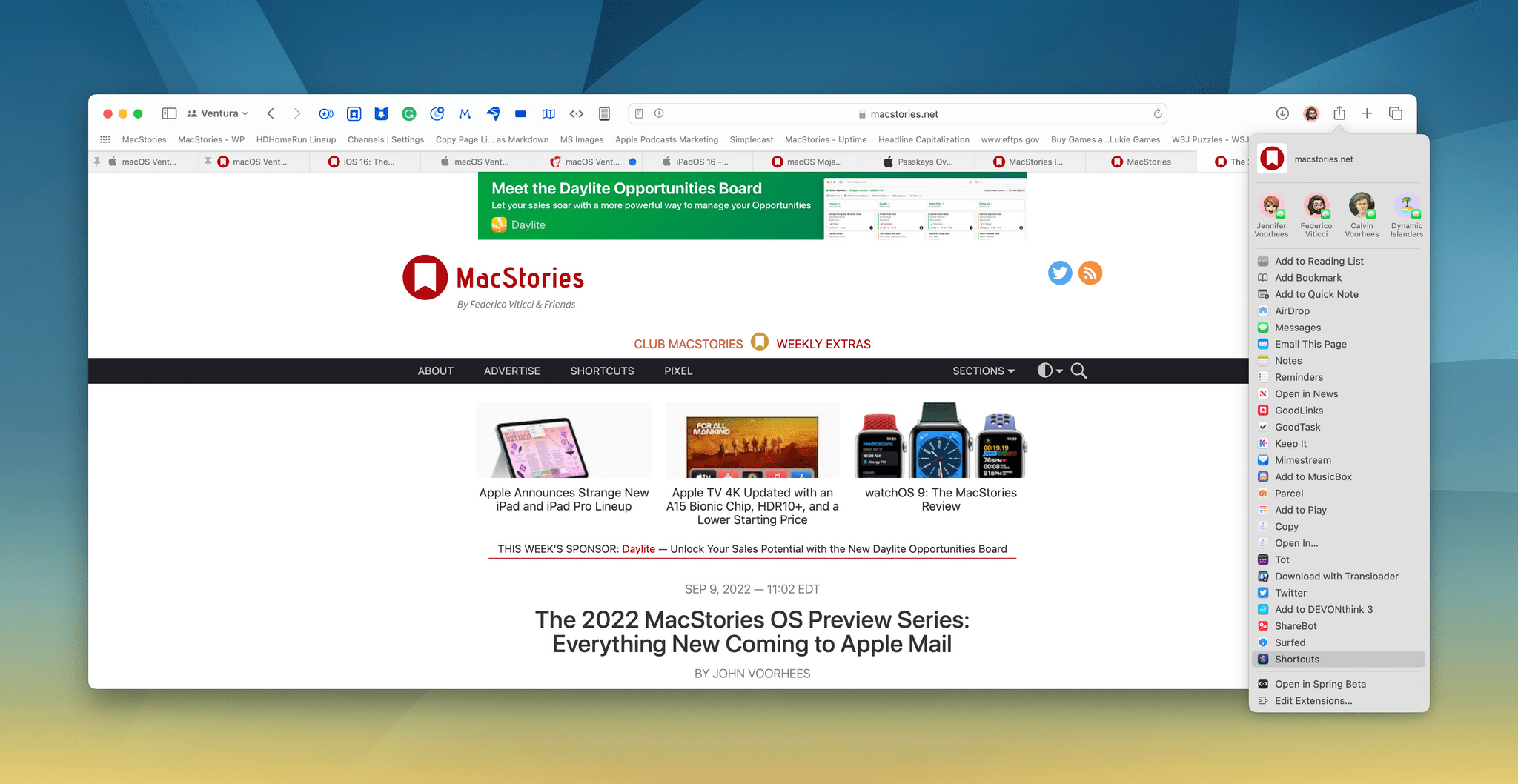 I’m happy to report that in Ventura, Shortcuts now has a spot in Apple’s redesigned share menu. Select it, and a window appears with a list of all your shortcuts that support the share sheet. I’m pleased that this is now possible because it means fewer of the shortcuts I run that way on iOS and iPadOS need to be converted to work another way on the Mac. When it comes to actions that integrate with macOS system functionality, though, there’s not really anything to cover this year. Monterey went a long way with system integration by turning the most popular Automator actions into Shortcuts actions, but even then, the system-level actions felt like a good start, not the finish line. The functionality of macOS runs deep, and the surface has only just been scratched by the actions built into Shortcuts so far.

Instead, I’m reminded of something I said in my Monterey review about Shortcuts’ scripting support:

I’m of two minds about the scripting support in Shortcuts. On balance, I’m glad it’s there because of the power and flexibility it provides users. However, one of my longstanding complaints about Automator is that every time I’ve used it in the past, I’ve quickly hit a wall where the solution was to use Automator to run a script that could do what Automator couldn’t. Too often, that made Automator feel like a script launcher instead of a powerful automation tool in its own right, which I hope doesn’t happen with Shortcuts for Mac.

Unfortunately, I’ve had that familiar Automator feeling too often over the last year. I’ve resorted to AppleScript a lot on the Mac, but overall, the scripts tend to be shorter and for very discrete bits of functionality, but discrete bits of system functionality are exactly what Shortcuts actions should be providing. So while I’m grateful for the option to use scripting to accomplish tasks that Shortcuts can’t on its own, the catalog of system-level Shortcuts actions needs to grow if Shortcuts is really the future of Mac automation.

The catalog of system-level Shortcuts actions needs to grow if Shortcuts is really the future of Mac automation.

What’s more, Apple’s system apps haven’t kept pace with the Shortcuts actions that they’ve introduced on the iPhone and iPad. There are exceptions, of course. For example, the Notes team deserves a lot of credit for introducing a long list of thoughtful Shortcuts actions on every platform. 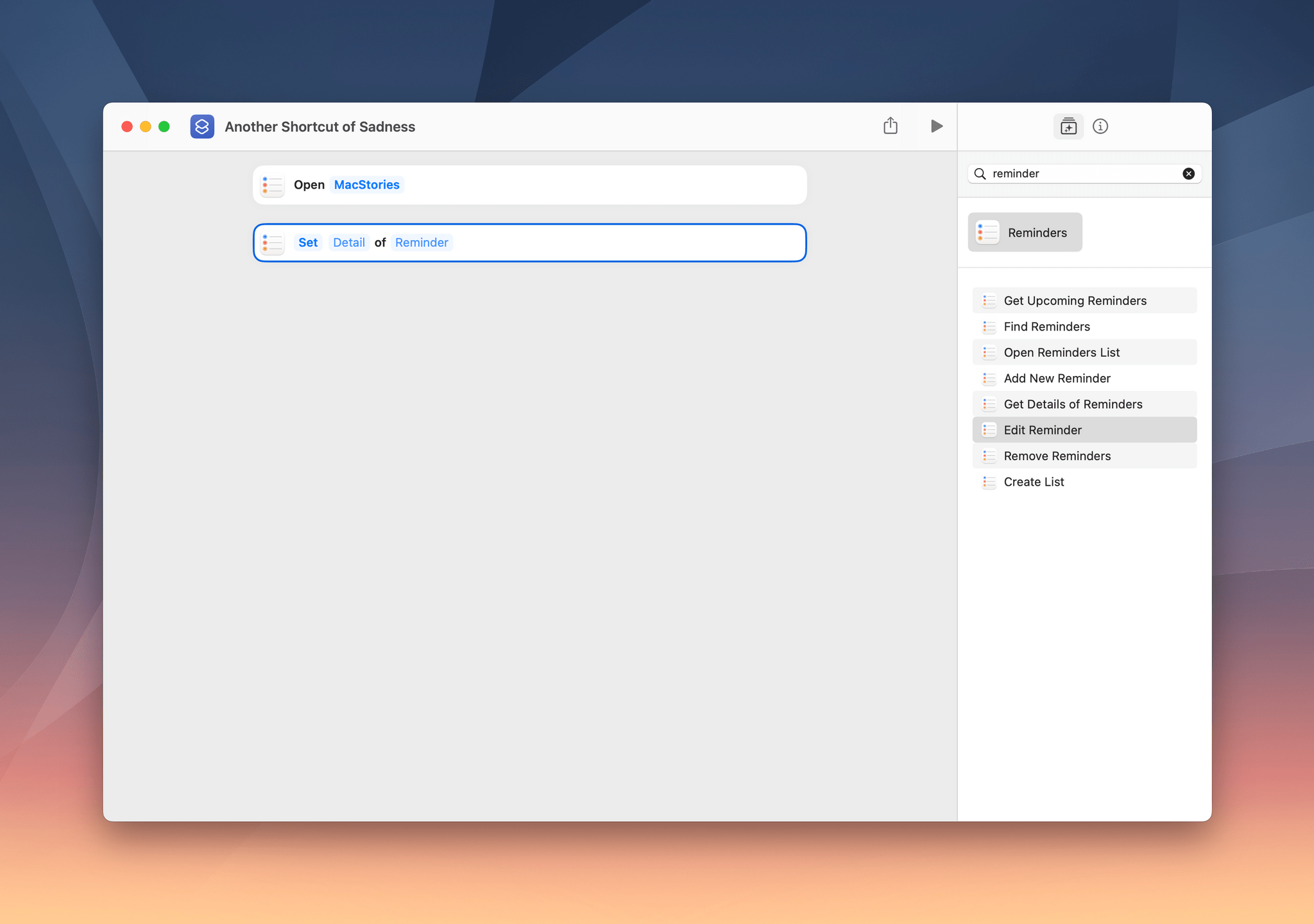 Not all system app actions made it from iOS and iPadOS to macOS.

The same isn’t true for other system apps. For instance, Mail for Mac added Set Mail Focus Filter as an action in Shortcuts for Mac, but iOS and iPadOS also added Open Mailbox and Search in Mail. Reminders added Open Smart List and Search Reminders in iOS and iPadOS 16, but none of those are included in macOS. Safari added actions related to Tab Groups, bookmarks, and Reading List that are available on the iPhone and iPad but not the Mac. There are other examples, but I think you get the point – few new system app Shortcuts actions made it to the Mac.

As our pal Reggie likes to ask, “So what?” The ‘so what’ goes to the core of what I covered at the very outset of this review. Apple’s system apps have entered a new era where the in-app features of their Mac counterparts no longer lag behind the iPhone versions. That’s a big advantage for people who use multiple Apple devices.

Shortcuts, however, has become an immediate outlier. That’s tough for anyone building shortcuts. You can use the new iOS and iPadOS 16 actions, but those shortcuts won’t work on the Mac. So, while Shortcuts for iOS and iPadOS is opening new avenues of automation, Shortcuts for Mac is creating roadblocks. I understand how difficult the past year has probably been for the engineers working on Shortcuts, and I’m not surprised by where we are with Ventura, but I can’t help but be disappointed too.

I used to work on my Mac with my iPhone or iPad nearby to handle running the shortcuts that are so deeply woven into the workflows at MacStories. With Shortcuts for Mac, I thought those days were over. Unfortunately, as we push those shortcuts forward with the latest actions on iOS and iPadOS, I find myself back in the familiar and unwelcome position of falling back to my iPhone and iPad to run them. It’s just easier than maintaining a second set of Mac-only shortcuts.

Shortcuts’ omissions on the Mac don’t end with actions. Also missing are App Shortcuts, the single-action starter shortcuts introduced with iOS 16. App Shortcuts have a lot of potential as entry points for new users who are new to automation, that is, as long as they don’t use a Mac. I’m also a fan of the way iOS and iPadOS now break long lists of actions into related groups in the action library. That would go a long way to making it easier to navigate large collections of actions on the Mac, too, so hopefully, it’s something we’ll see added in the future.

That’s the most I’ve ever written about what’s missing from a release of macOS, but that’s because Shortcuts is important, not just to me personally, but to macOS. The trouble is that it’s still playing catch-up on the Mac. That’s not great for what’s supposed to be the future of automation on the Mac. The app’s potential is obvious from what was released with Monterey. There are things that can be done with Shortcuts on the Mac, especially with its rich support among third-party developers, that aren’t, and may never, be possible on the iPhone or iPad. Yet it still feels like Shortcuts has barely left the gates since last fall.

That’s frustrating for me, but my greater concern is that the message being delivered to a broader audience is that Shortcuts isn’t for the masses. It’s for people with more time than sense. Tinkerers. Hobbyists. Nerds.

It’s okay for Shortcuts to be all those things, but it’s been sold by Apple, quite rightly in my view, as a tool that can scale from simple automations to ones that rival native apps. That’s the vision, but unfortunately, it’s not the reality – yet. I’m still optimistic Shortcuts will get to where it’s as natural for a Mac user to open as Notes, but there’s still a long way to go. 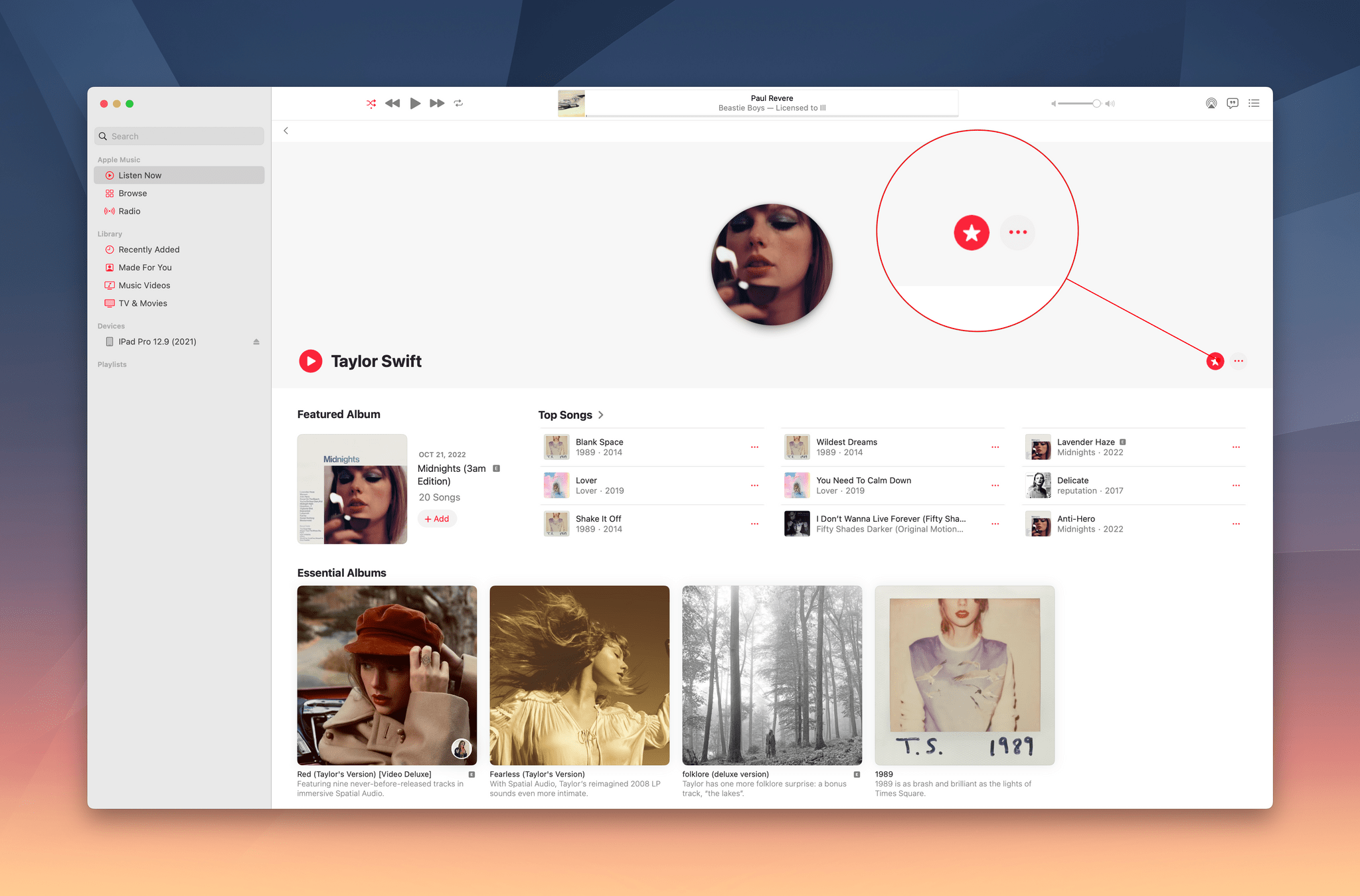 That lonely star in Music is all it got in Ventura.

There’s not much more to say about each of these miscellaneous system app changes except that the lack of Music changes is disappointing because it’s least reliable on the Mac and is in need of a redesign that improves discovery.