macOS 12.3 Monterey has arrived, delivering Universal Control, the long-awaited feature that allows users to transition between Macs and iPads with a single set of input devices. Federico is covering the feature from the perspective of iPadOS 15.4, so I’ll focus on the Mac. In addition to Universal Control, macOS 12.3 includes other smaller features, which I’ll cover at the end of this story.

I’ve been using macOS 12.3 as my daily OS throughout the current beta cycle for a couple of reasons. First, Shortcuts has been steadily improving ever since Monterey’s fall introduction, so I wanted to stay on top of those improvements in real-time. Second, I’ve been fascinated by the possibilities created by Universal Control since it was announced at WWDC last year. I’m pleased to report that the feature hasn’t disappointed me and has quickly found a place as part of my core computing setup.

Universal Control, which is still considered a beta, lets you use the same trackpad, mouse, and keyboard with multiple Macs and iPads, moving seamlessly from one to the other. Unlike Sidecar where your iPad becomes a second display for a Mac, with Universal Control, your iPad continues to operate as an iPad, but with a single set of input devices for both it and your Mac. As someone who has used keyboards and mice from Logitech that support connections to multiple devices but rely on pressing buttons to switch between them, I can tell you, Universal Control is a vastly better solution.

With Universal Control, you can push your pointer from one screen to the other. As you do so, there’s an animation that makes it appear as though the pointer is pushing through a membrane as it transforms its shape to match the device on which it’s running. It’s a neat effect that is especially helpful in understanding what is happening the first few times you use the feature. Once your pointer makes it to its new destination, you can control your apps just as you would with any connected pointing device and keyboard.

Once activated, you can unpair devices using the Displays menu bar item.

You can also drag and drop content from one computer to the other. Images, text, files, and even URLs all work, but, of course, you must be dragging to a destination that can accept that content. That’s easiest when going from the iPad to the Mac, where you can always drop a file onto the Mac’s Desktop. Going the other direction, you’ll need Files or another app that can accept what you are dragging to be open. It’s this somewhat cumbersome setup that led to my suggestion that Apple implement a shelf app or similar OS feature on AppStories+ recently. There’s enough friction with drag and drop between devices that I often resort to AirDrop instead.

and the compatible iPads:

Also, to use Universal Control, you must have at least one Mac in the mix, meaning that it won’t work with two iPads only, but it will work with just two Macs. Each device must be signed into the same iCloud account using two-factor authentication. Universal Control can be used wired with a USB cable, but to work wirelessly, Bluetooth, WiFi, and Handoff must be enabled, the devices must be within about 30 feet, and the devices can’t be sharing a cellular or Internet connection. Also, to use Universal Control over a cable, your Mac must be trusted on your iPad. That sounds like a lot of caveats, but I expect most people who try Universal Control for the first time will use devices that meet those qualifications.

Universal Control works with Apple-made peripherals as well as those from third parties, but with some limitations. I don’t have a Magic Mouse, but I’ve tested Universal Control with the current-generation Magic Trackpad and Magic Keyboard with Touch ID, and both worked well. My scroll wheel on my MX Master 3 mouse worked fine once I disabled the Logitech Options Daemon in the macOS Accessibility section of the System Preferences Security panel.

I also use a Logitech MX Master 3 mouse. Its scroll wheel didn’t work at first, but disabling the Logi Options Daemon in the Accessibility section of the System Preferences Security panel and restarting my Mac fixed the problem. Hopefully, Logitech will update its software soon to fix the issue because the Logi Options Daemon is necessary to support some of the mouse’s advanced features. That hasn’t been a big deal for me because I haven’t customized my MX Master’s buttons, but I know a lot of people have. 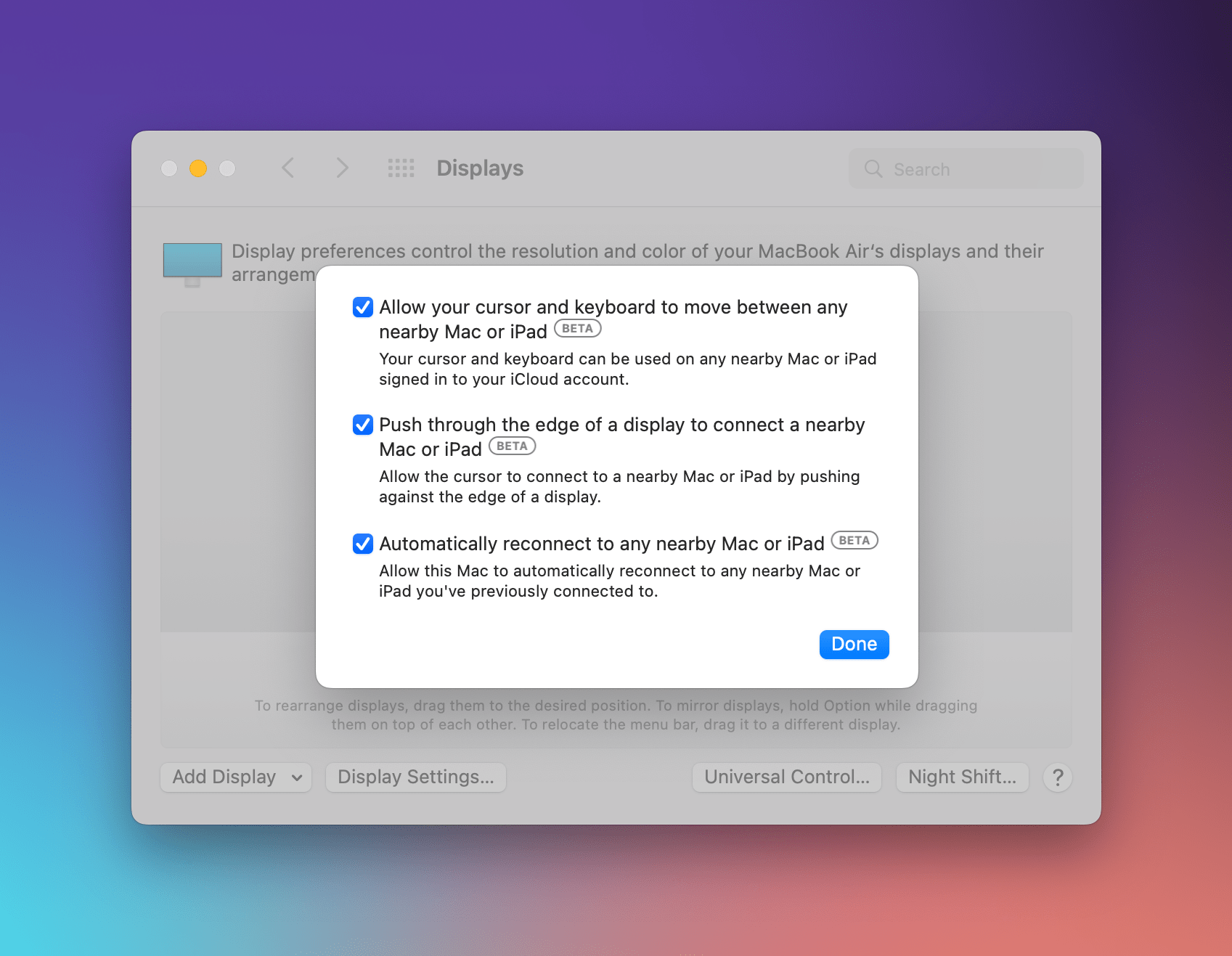 One of the nicest aspects of Universal Control is that it just worked as advertised when I first tried it without any setup. However, if you plan to use a configuration regularly, you can go to the Display panel of System Preferences, click on the Universal Control button at the bottom of the window, and choose ‘Automatically reconnect to any nearby Mac or iPad’ to ensure your devices connect as soon as they are unlocked.

That’s a lot of technical details that really don’t do Universal Control justice. That’s because it’s one of those features you need to try to really understand, which is why I expect it will be a go-to demo at Apple Stores. The first time your pointer pops from one device to the other feels like magic, but it quickly becomes routine because it also feels so natural. To me, that’s the difference between a clever demo and a useful feature, which has been borne out by how fast Universal Control has found its way into my daily work routine. 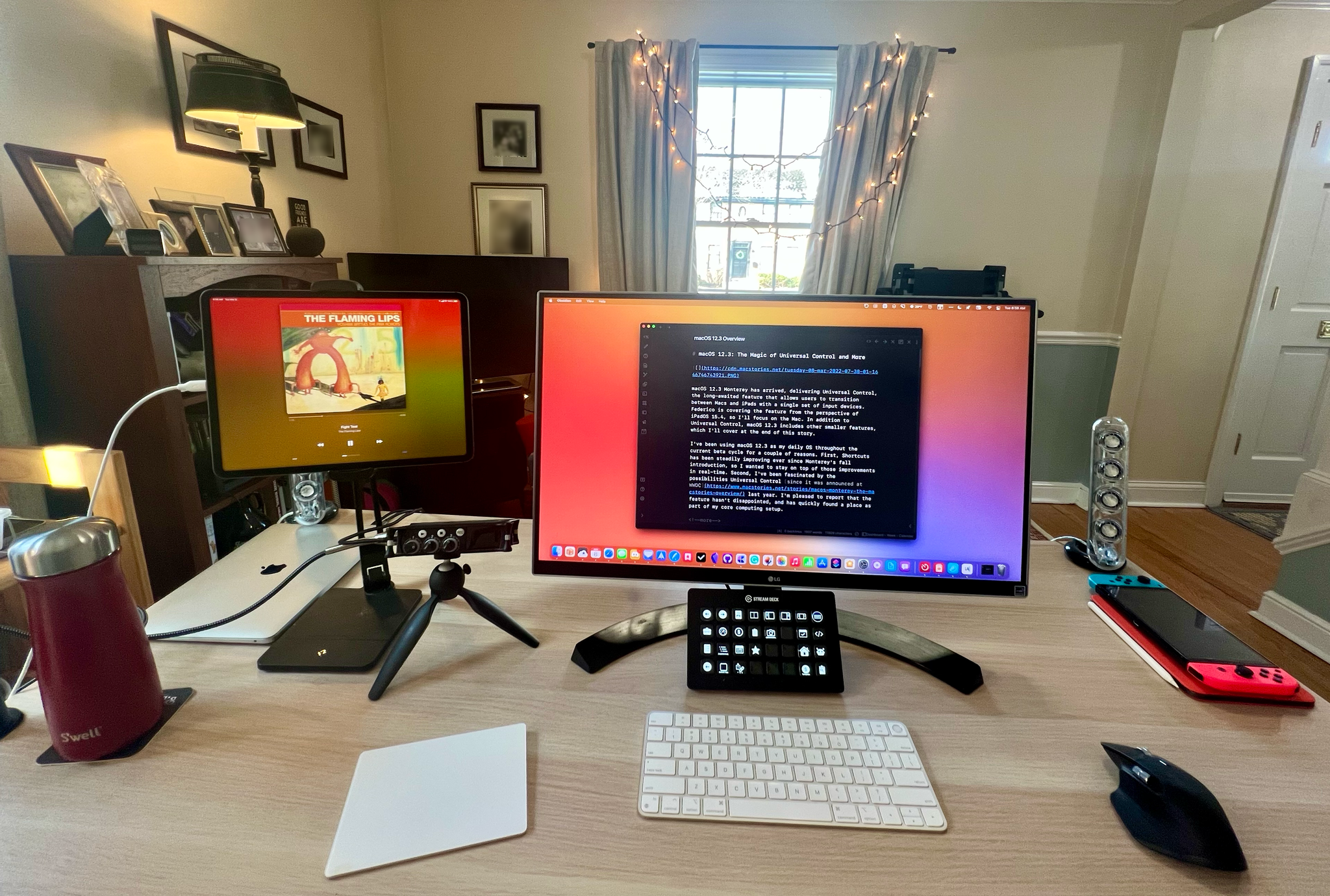 For the past several weeks, I’ve had my iPad Pro sitting on my desk in a Twelve South HoverBar Duo stand right next to my Mac’s display. I’ve tried this sort of setup in the past using the ability of Logitech’s MX Keys and MX Master 3 mouse to flip between devices, but it was just cumbersome enough that the setup never stuck.

In contrast, Universal Control makes moving back and forth between my Mac and iPad Pro seamless. It’s not a setup that’s for everyone, but this sort of hybrid Mac-iPad approach is something I’ve done for a long time, just not as efficiently. Now, I have my choice of iPadOS and macOS apps all constantly, and quite literally, at my fingertips. It’s not that I couldn’t accomplish most of the things I do on just one platform without Universal Control. I could, but the difference is that Universal Control gives me the freedom to pick the best tool or the tool I prefer for every task, which is a level of flexibility I love.

My sole complaint about Universal Control is how it handles focus as the pointer moves between devices. If I move my pointer from my Mac to my iPad, I can swipe on my trackpad to scroll a webpage or long document. However, that sense of control over the iPad vanishes as soon as I hit ⌘ + Tab, which cycles through the Mac’s apps instead of the iPad’s. The same thing happens in the other direction too. Although scrolling works immediately, you can’t control the apps on a platform until you click somewhere inside the destination device’s UI. I thought this would be something I would get used to with time, but after weeks of using Universal Control, I haven’t. What I’d like to see is a tweak of how Universal Control works, so the focus travels immediately and automatically with the pointer from one device to the other.

I’ve also seen occasional stutters and slowdowns when moving the pointer to my iPad, but the slowdowns have been short-lived and infrequent. Perhaps that’s because my Mac is on a wired Ethernet connection at my desk, and my iPad sustains about 300 Mpbs up and down over WiFi, but in any event, the glitches haven’t been significant enough to affect my enthusiasm for Universal Control. 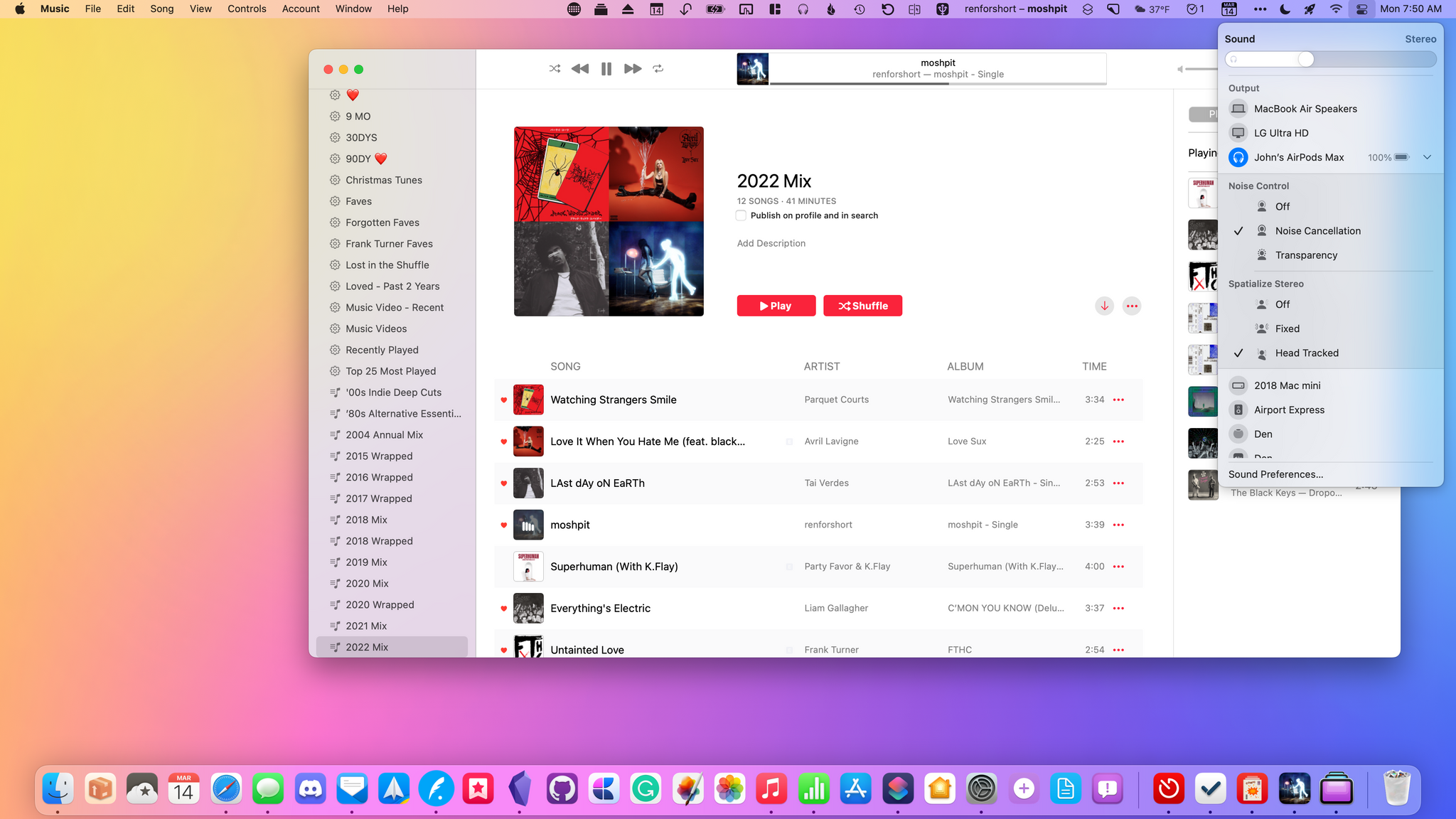 Universal Control is far and away the biggest change to macOS 12.3, making it worth upgrading if you use multiple Apple devices, but there are a handful of other notable changes coming with 12.3 too:

Universal Control is the star of the macOS 12.3 show. When I first tried it with my Mac, I wondered if it would feel as though the iPad had been relegated to a supporting role in my daily computing, but it hasn’t felt that way at all. I’ve worked in a hybrid style for a long time. Even when I’m predominantly using my Mac, I’ve turned to the iPad to run shortcuts, look things up, and take advantage of the iPad apps that I prefer for certain tasks. Now, that’s just easier. I can flip over to my iPad Pro without thinking about it and just as easily switch back to the Mac from the iPad. Instead of relegating the iPad to a Mac accessory, Universal Control has expanded my use of both, forming a more powerful duo than using either by itself.

Stay tuned, because later this month, I’ll be expanding on how my daily workflows have changed with the introduction of Universal Control in my Macintosh Desktop Experience column for Club MacStories+ and Club Premier members.