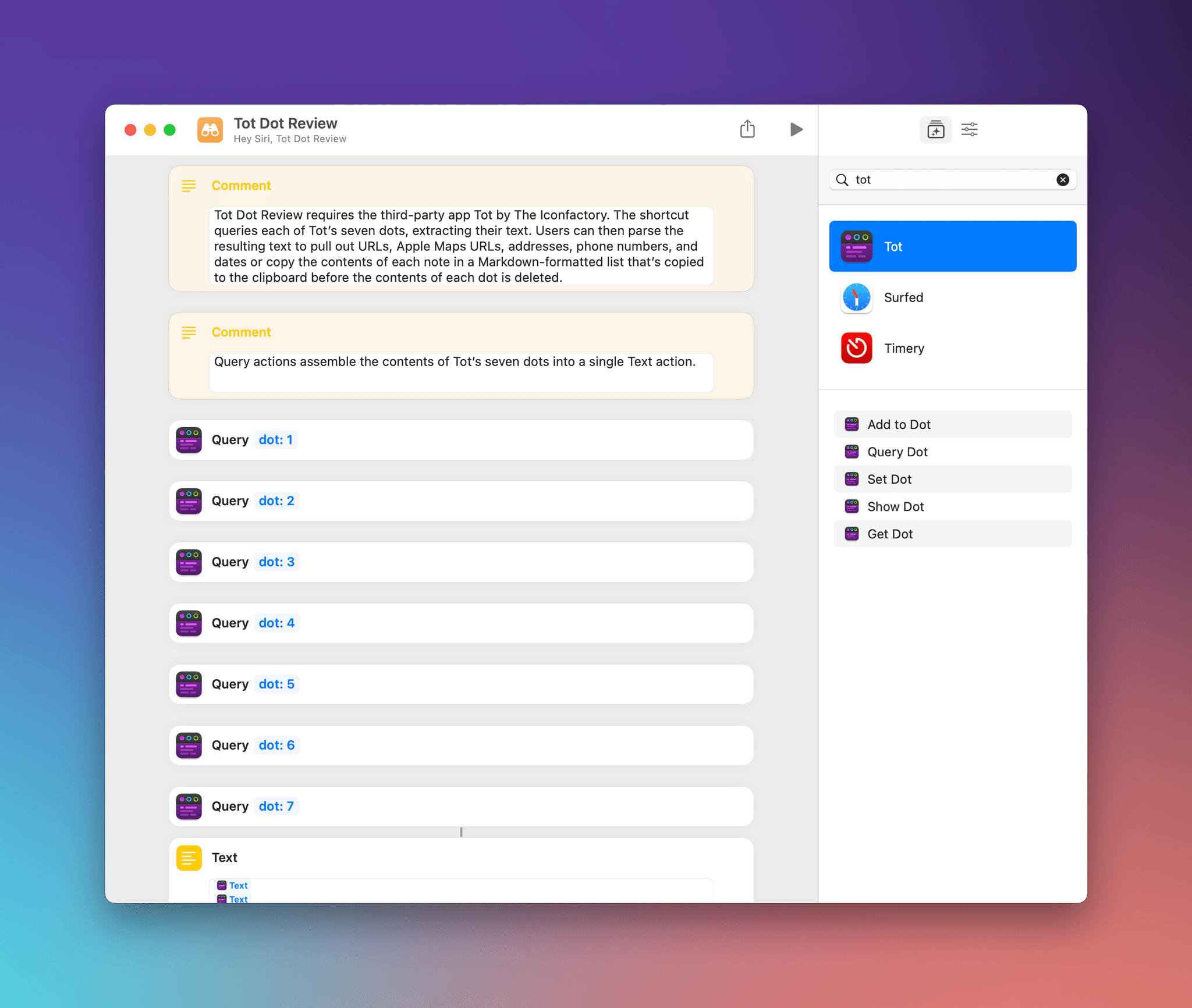 I’ve used Tot by The Iconfactory on and off since it was released in 2020 and reviewed by Federico, but it never stuck. I never came up with a system for using the app that fits well with how I work. Instead, I would simply dump text and URLs copied from the web or jot notes to myself haphazardly in any of the app’s seven colorful dots. The trouble was that when I went back to the app to find something, I often found myself clicking and scrolling around a lot to find what I wanted.

With the introduction of Tot’s Shortcuts support, I immediately saw an opportunity to process Tot’s dots in ways that would make the app fit better with the way I use it. I still don’t have a system for the app’s seven dots. Instead, I’ve got a shortcut called Tot Dot Review that lets me parse and process Tot’s dots in several different ways that shows off Tot’s shortcuts actions along with a handful of built-in Shortcuts actions for extracting different types of data from text.

Tot Dot Review lets me quickly pull URLs, Apple Maps URLs, addresses, phone numbers, and dates from my Tot notes without skimming through each of the app’s seven notes. I can also copy Tot’s notes into Markdown-formatted text that I can copy and paste into another app for processing and delete the content of all seven Tot notes, so I can start fresh. The combination of options has made it easier to find and manage things in Tot, which has led me to use the app more too.

To make it easier to search through all seven dots at once, Tot Dot Review includes a Query action for each dot that adds their text to a single Text action that is then set to the variable Dots.

With those setup steps out of the way, Tot Dot Review gives you a choice to Parse Tot’s dots or Copy and Clear them. The Parse Dots option offers to extract web URLs, Apple Maps URLs, addresses, phone numbers, and dates from the dots using built-in Shortcuts actions. 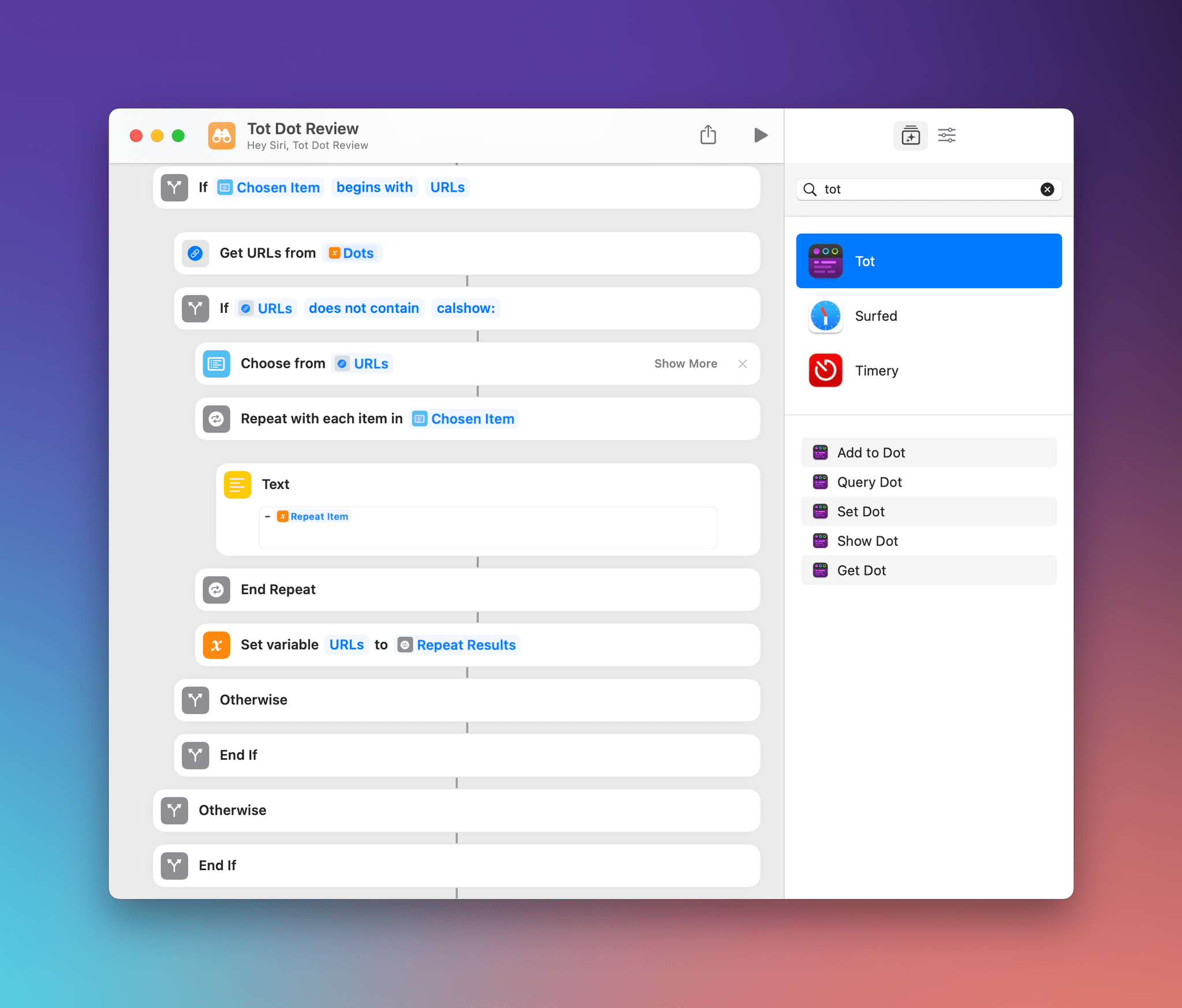 After you pick the data you want to extract, Tot Dot Review runs a series of conditional blocks to extract the categories you’ve chosen, displaying each, so you can pick what you want before copying the information to the clipboard as Markdown-formatted text.

To grab URLs, Tot Dot Review uses the Get URLs from Input action adding each one to a bulleted list, using a Repeat with Each action, but only if the URL doesn’t include calshow:, which is the URL used to show dates in the Calendar app. The results of the repeat loop are saved to a variable called URLs for clarity’s sake.

Apple Maps URLs, addresses, phone numbers, and dates follow the same pattern using the Get Maps URL, Get Address From Input, Get Phone Numbers from Input, and Get Dates from Input actions. Like the URL block, the Apple Maps URL block includes a conditional block to exclude an unusual case where no dot contains an Apple Maps URL, so Shortcuts decides to create a default location-less Maps URL. 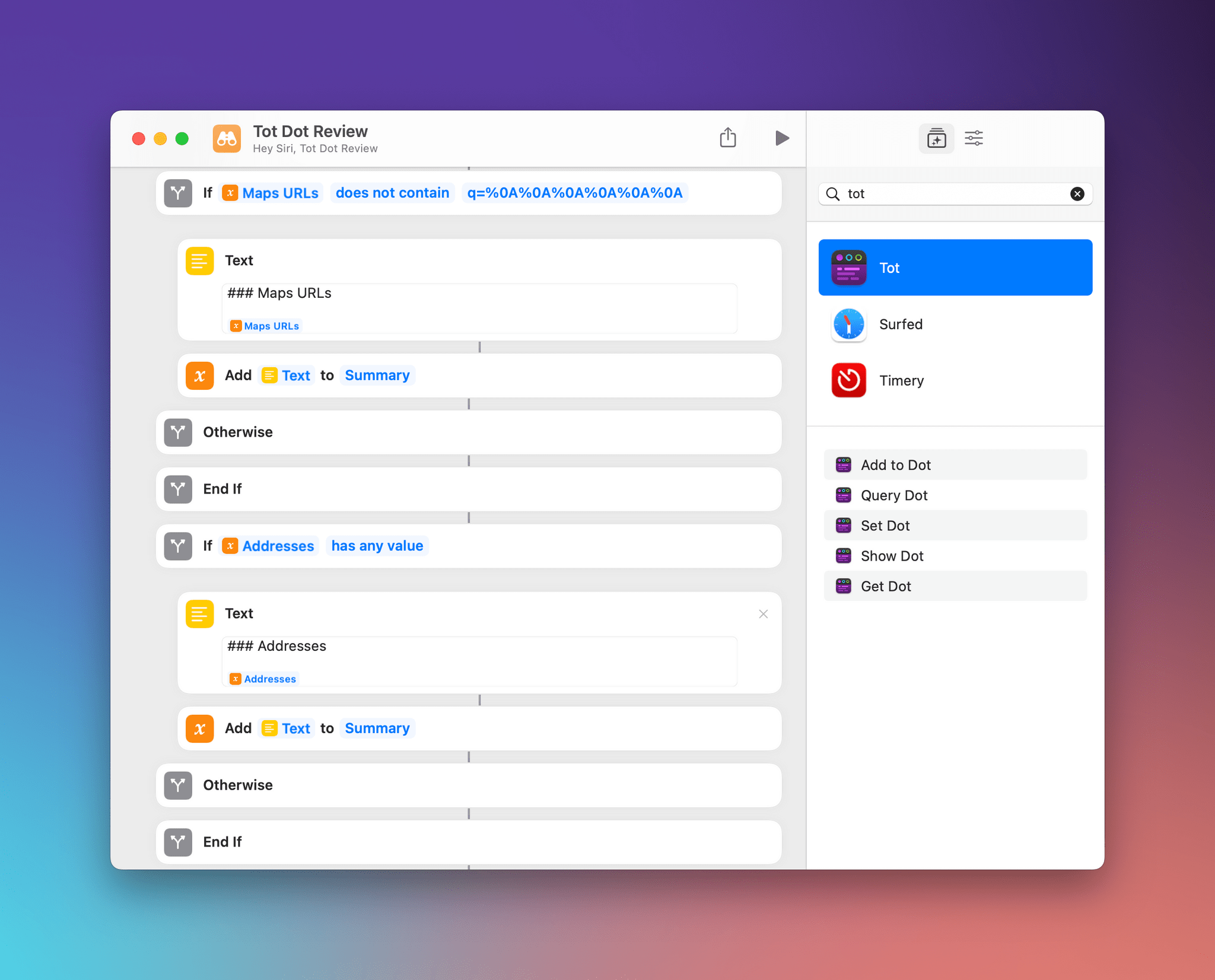 Once parsing all dots is complete, Tot Dot Review assembles Markdown-formatted text sections for each data type that was found, adding them to a variable called Summary. Once every data type has been processed and added to the variable, it’s copied to the clipboard and displayed so you can see what was copied before pasting it into another app.

Parse Dots is a handy option that I use whenever I’m unsure of where something is among Tot’s dots. If I know I’m looking for something like a phone number I jotted down or a URL, Parse Dots makes it quick to find what I want without altering my Tot notes.

Assembling dots into one Text action.

The second option offered at the beginning of Tot Dot Review is ‘Copy and Clear.’ Using the Text property of the Dot Info object, ‘Copy and Clear’ assembles a Markdown-formatted list of the contents of each dot and offers to clear all dots for a fresh start. Your dots are copied to the clipboard regardless of whether you clear your dots or not, providing the option to create a copy without deleting anything. If, however, you decide to clear your dots, Tot Dot Review uses Tot’s Set Dot action to replace the contents of each dot with an empty note. Copy and Clear is ideal whenever it’s easier to take your notes into a text editor or note-taking app where you can see the contents of all seven dots at once, which can make it easier to find the tidbits I want to save or break out into separate notes. 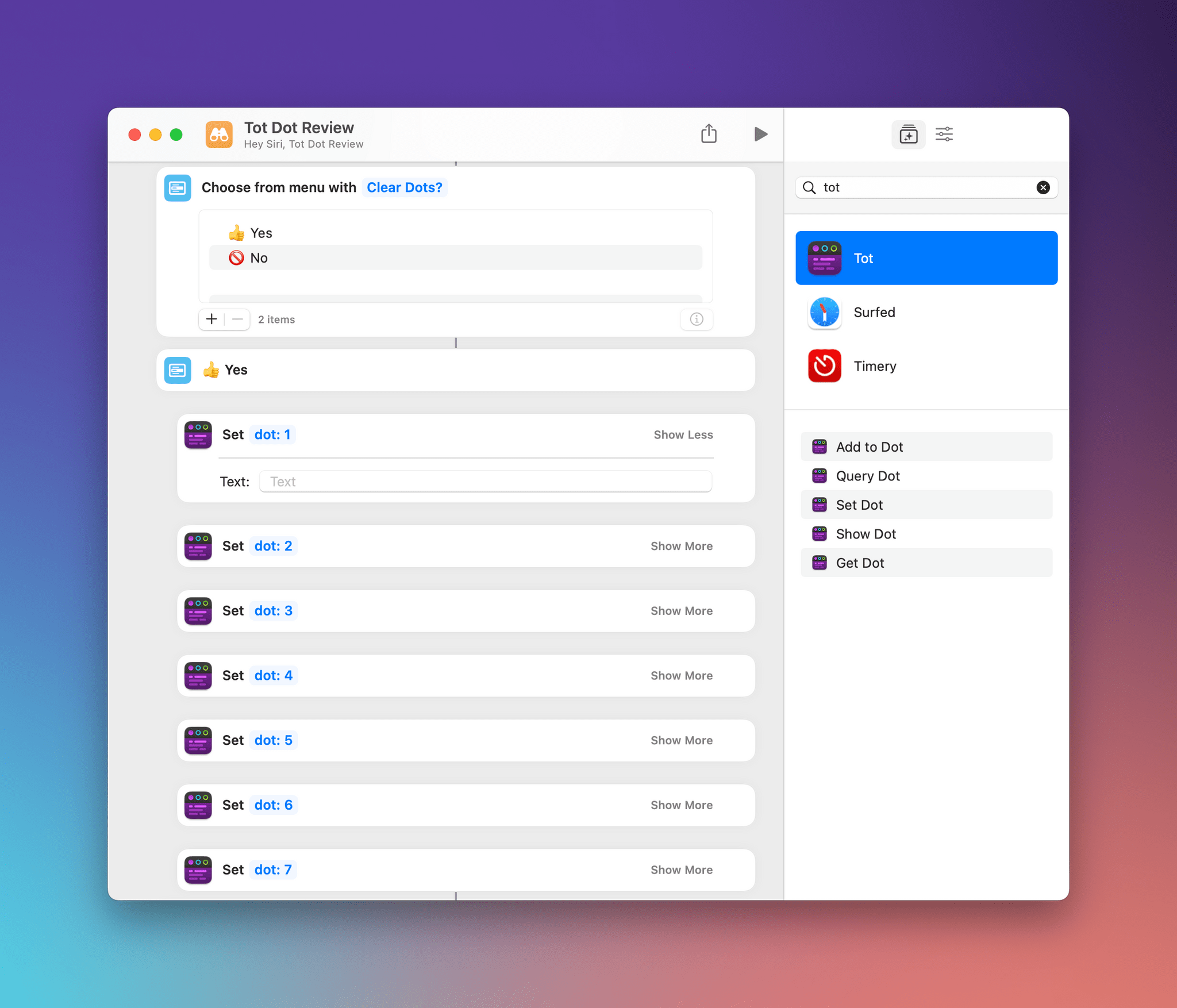 Tot’s an excellent app. I love the design and the lightly structured system it creates around text. However, when I use the app heavily, the structure sometimes gets in the way, leaving me to click or swipe around from dot to dot more than I’d like. That’s why I made Tot Dot Review: it helps me pinpoint specific scraps I’ve saved or gather everything together in one place where it can be incorporated with other notes, making me more likely to use Tot than ever before.

Tot Dot Review requires the third-party app Tot by The Iconfactory. The shortcut queries each of Tot’s seven dots, extracting their text. Users can then parse the resulting text to pull out URLs, Apple Maps URLs, addresses, phone numbers, and dates or copy the contents of each note in a Markdown-formatted list that’s copied to the clipboard before the contents of each dot is deleted.

You can follow MacStories’ Automation April coverage through our dedicated hub or subscribe to its RSS feed.