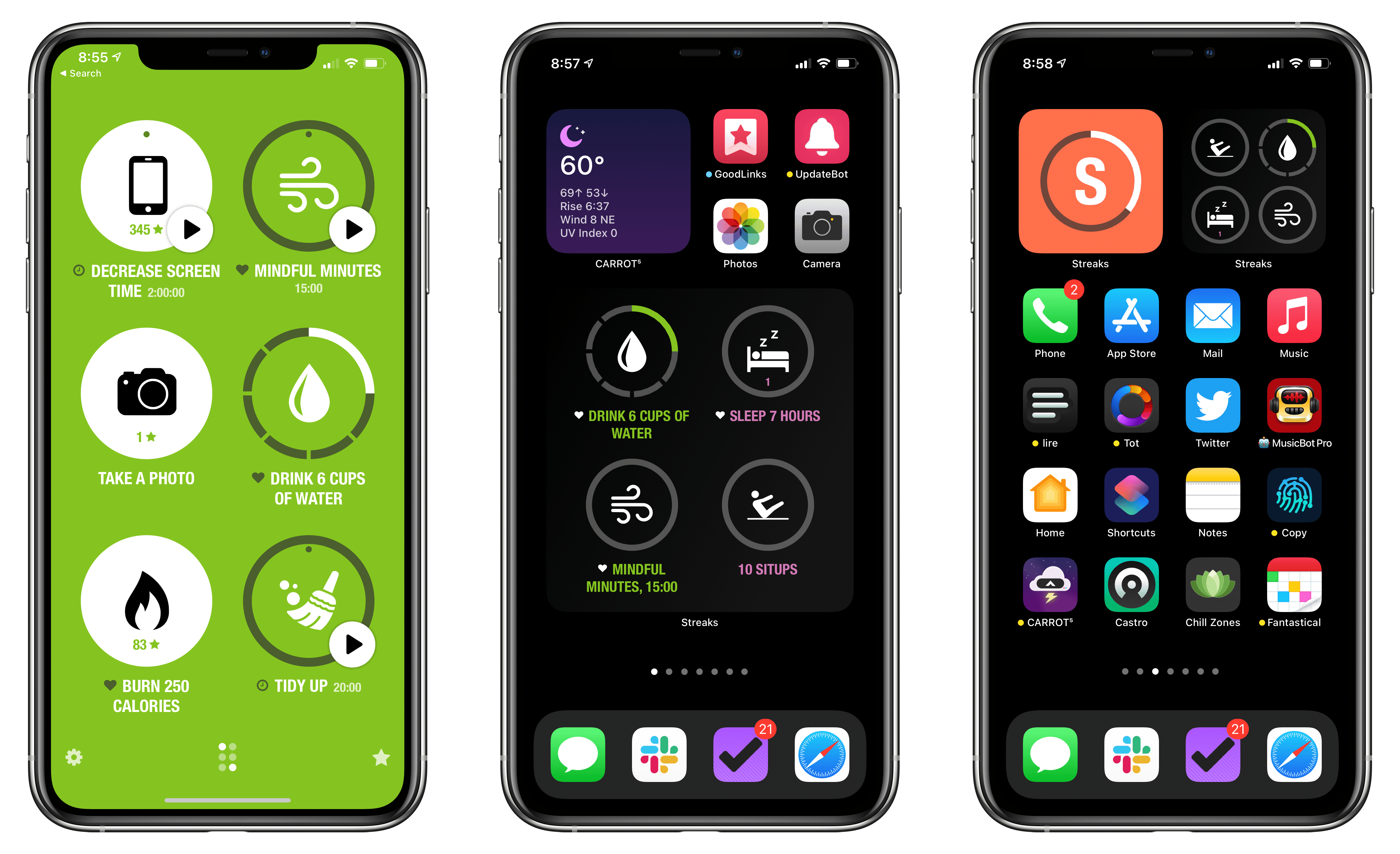 Habit tracking apps have proliferated across the App Store in recent years, but Streaks by Crunchy Bagel, which is the first one I ever tried and reviewed, is still one of my favorites. This week it’s been updated with a trio of highly-customizable widgets, a library of watch faces, plus some design changes, new iPad features, and other updates.

Let’s start with widgets, which are the marquee feature of Streaks’ latest update. The simplest one is the App Icon widget that uses the ring around the icon’s letter ‘S’ to indicate the progress you’ve made on the habits you’re trying to form or break. Widgets can’t take input like checking off your Streaks tasks, but tapping the App Icon widget opens the app, and as you mark tasks complete, the ring of the widget fills, indicating how much further you have to go to reach your goals. 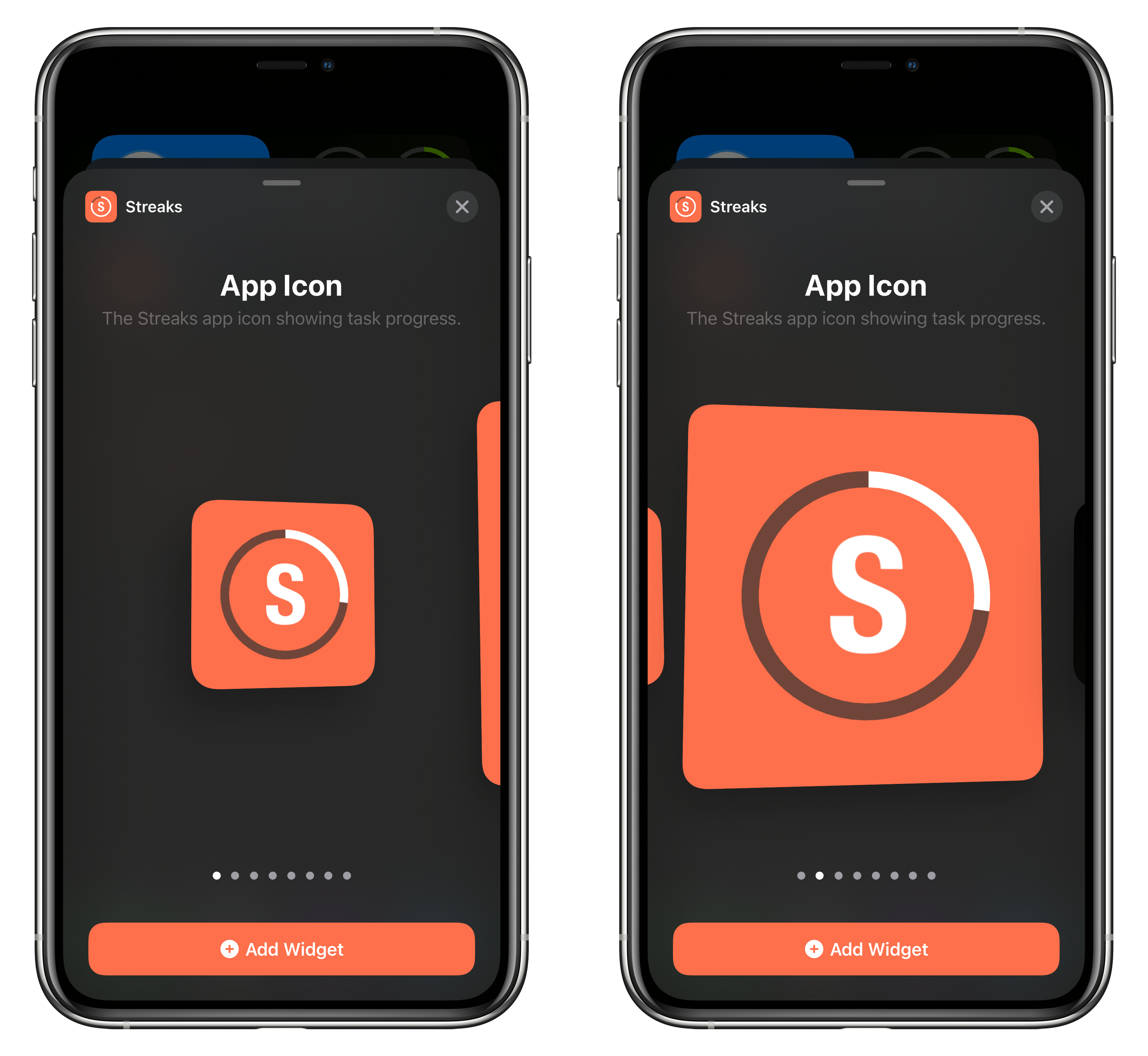 You wouldn’t think there would be much that could be customized on such a simple widget, but there is. The App Icon widget includes three customizable parameters that are included in the app’s other widgets too. You can pick which of the two pages of Streaks’ habits you want to track with the widget or allow the app to pick the page automatically. You can also pick a theme that matches the app, has a light or dark appearance, or is set automatically. You can even set the background of the widget to be a gradient or flat color. 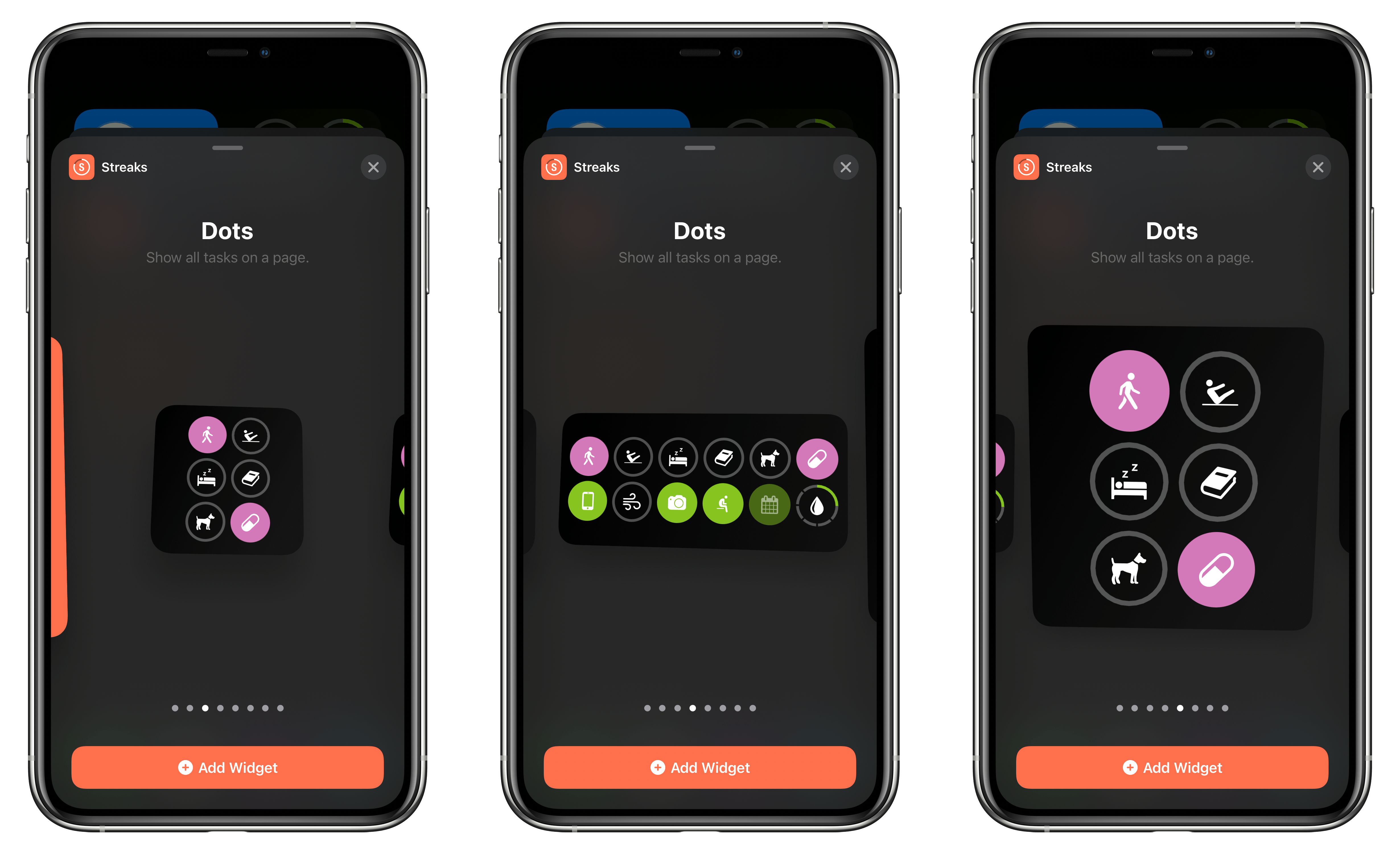 The second Streaks widget is called Dots. The small and large versions can display one of the two pages of habits the app tracks, filling the dots or their outline with color to indicate progress. The medium widget includes two rows of dots, which allows it to include both pages of tracked habits. Tapping on one of the rows opens the app to the page that corresponds to the habits in that row, potentially saving a tap compared to opening the app directly. In addition to the customizations found in the App Icon widget that I discussed above, the Dots widget lets you display, hide, or automatically control the display of streak numbers in the widget. 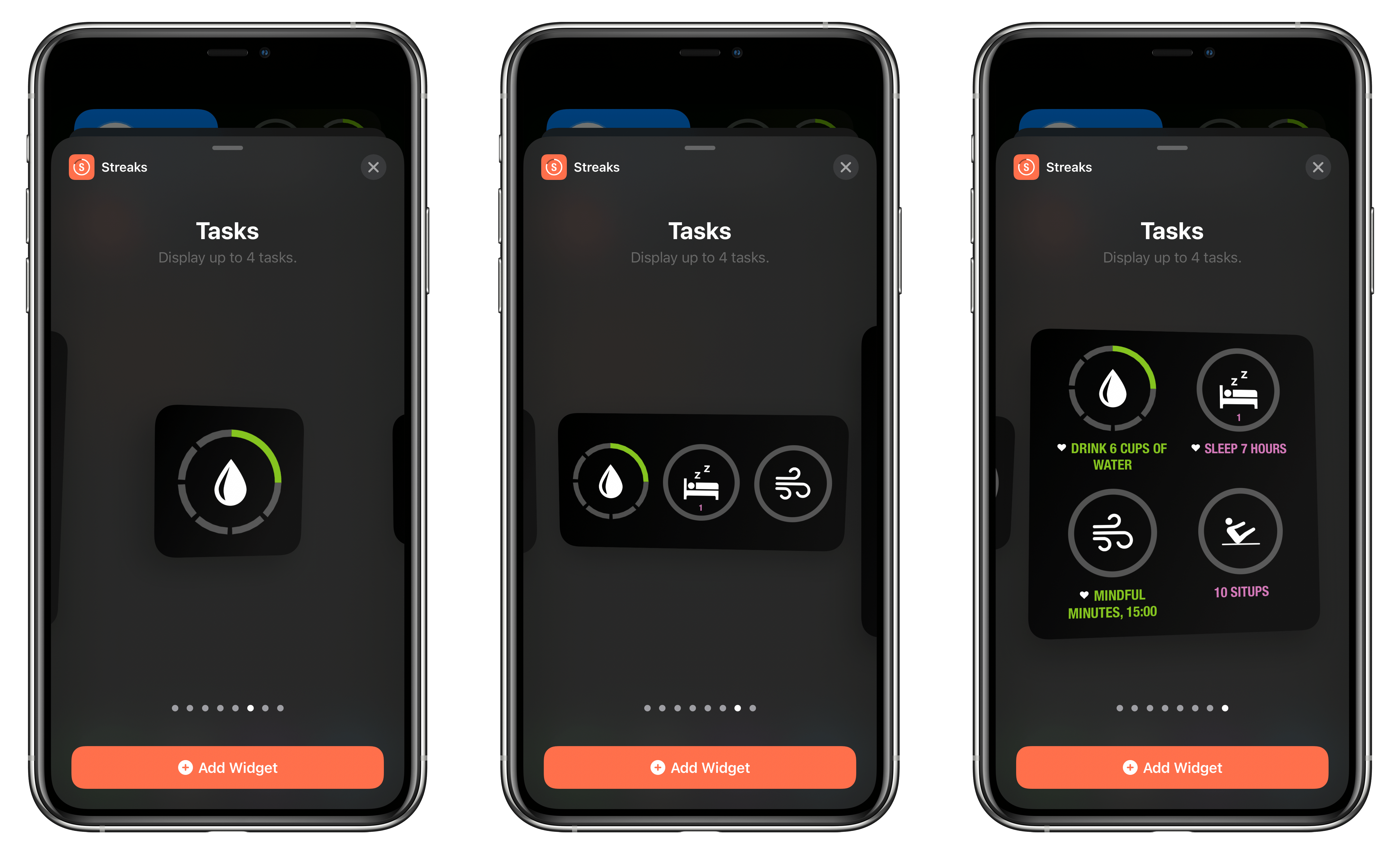 The final Streaks widget is called Tasks and supports all three sizes. Each widget supports up to four tasks tracked in the app, which can be set automatically or to an exact number. You can also let the system pick the habit that appears in the Tasks widget or pick it yourself and decide whether you want the title of the task to be displayed or just its icon.

That’s a lot of customization, which I love. It allows every user to jump in and use the widgets based on the automatically chosen options or dial in the exact look and data they prefer. Habit trackers like Streaks are another excellent use case for widgets. When you’re trying to form a good habit or quit a bad one, it helps to have a reminder of it, so you don’t forget to do or abstain from whatever you’re tracking, which is precisely what widgets do.

I don’t use a habit tracker app all year long. Instead, I dip in now and then as I come up with new habits I want to form. Since Streaks isn’t an app that I use all the time, getting an extra reminder from its widget is handy. 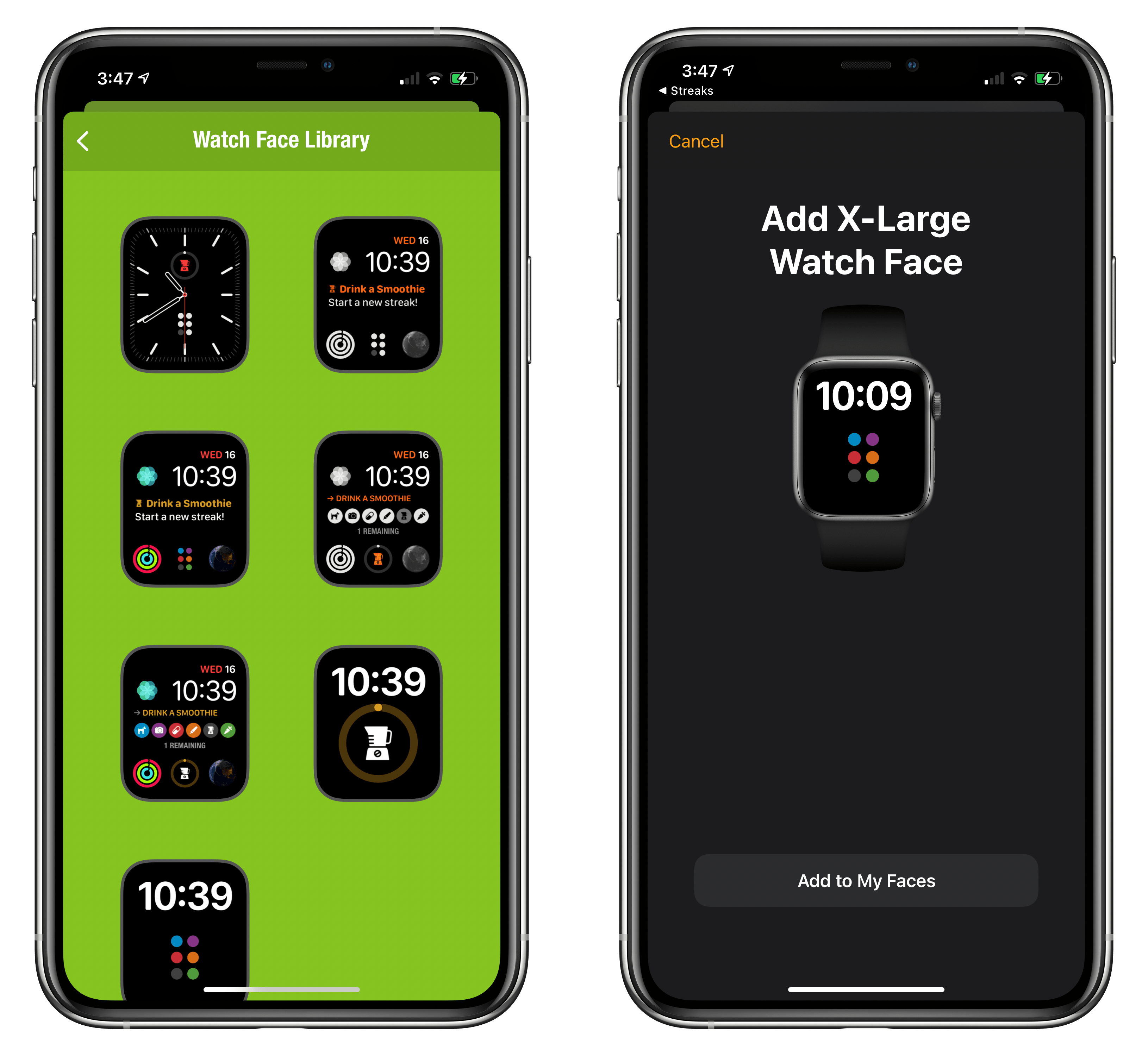 Streaks has also adopted watchOS 7s complication system, allowing you to add as many Streaks complications as there are slots on a watch face. The app also includes a library of seven watch faces that you can instantly add to your Watch from Streaks’ settings. CARROT Weather does something similar, and I’m glad to see other apps are too. It makes it simple for users to get started with Streaks’ Watch app and removes the fiddling and indecision about which complications to pick. With the library, users can pick something close to what meets their needs and use it as a starting point for customizing the face further.

From a design standpoint, the iPhone version of Streaks now allows you to flip from page one to page two of the habits you track with a swipe. Previously, you had to tap on the six-dot icon at the bottom of the screen. At first, I didn’t think the animation rotated the view along its center axis as I expected, but I think that’s an illusion created by the iPhone’s notch. 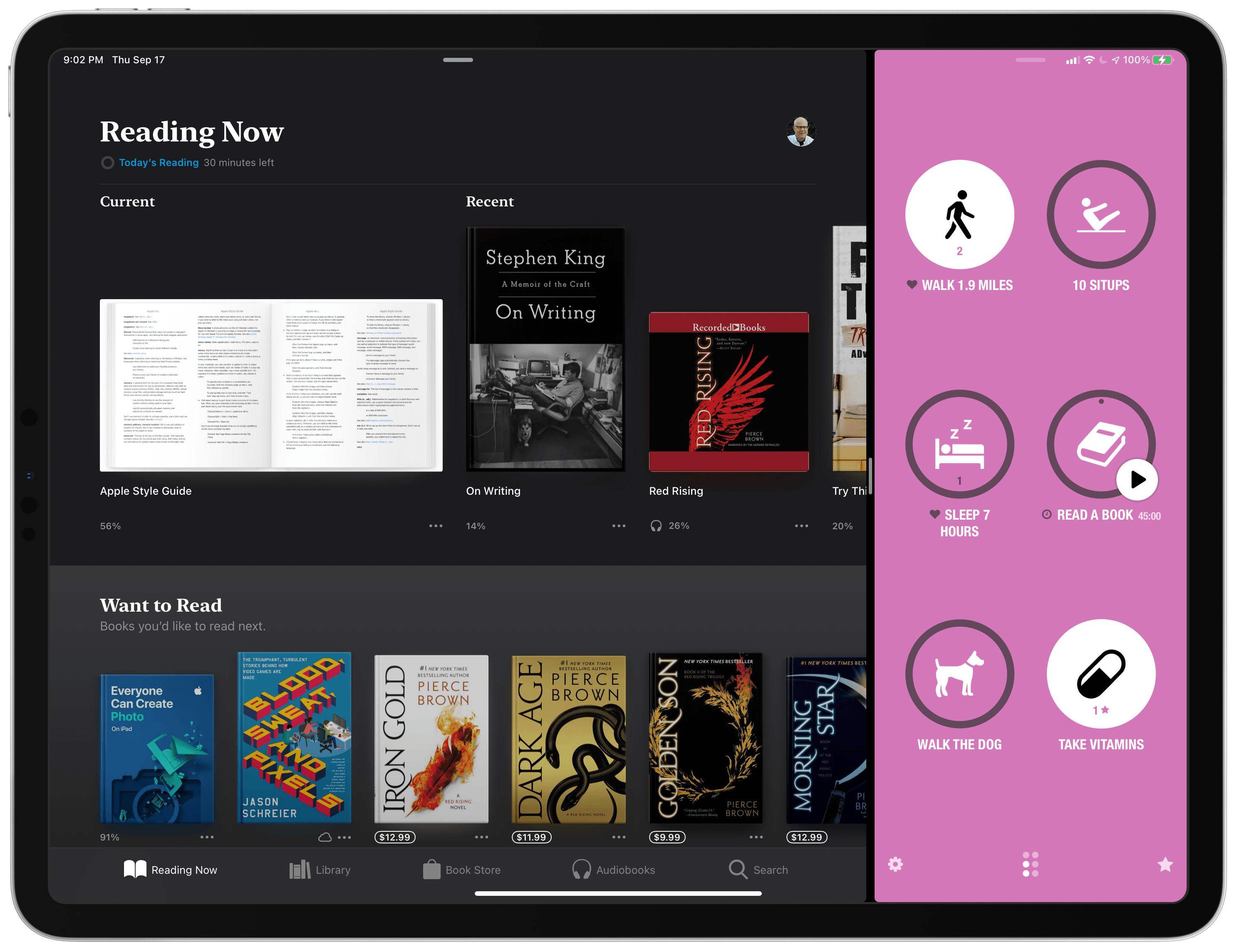 I’m happy to report that Streaks now supports Split View and Slide Over on the iPad too. This is long overdue, although I wouldn’t be surprised if the vast majority of people use Streaks on their iPhones, making adoption of these iPad features a low priority. Whatever the reason, though, the experience of using Streaks on the iPad is greatly improved by Split View and Slide Over.

The update adds several other updates to tasks and a couple of new shortcut actions too. Tasks can now include week-long items, and timer notifications can be set for a period before a timer ends or a period after it starts. Streaks has added support for hand washing, ECG, and energy deficit tasks along with new dietary health tasks. The app’s integration with the Health app has been upgraded with more tasks that can write to Health and the ability to convert certain tasks to health tasks and back. Finally, there are new shortcut actions for sending an immediate reminder about a task and saving exported data to a specified location.

It’s fun to look back at my review of Streaks 1.0 and see how far the app has come in almost five years. At its heart, what I’ve always liked most about Streaks is its simplicity. It’s fast and easy to use but includes fun animations, sound effects, and little touches that bring it to life and add personality. Those qualities have endured since the app was launched and are just as true with this week’s update to version 6.0.

Even though iOS and iPadOS don’t allow Streaks to offer task completion as part of its widgets, I think it was the right move for Crunchy Bagel to wholeheartedly adopt them. Hopefully, Apple will allow greater interactivity in the future, but even now, Streaks’ widgets serve users well as reminders of their progress towards their goals, helping keep them on track.

Streaks is available as a free update to existing users on the App Store. New users can purchase Streaks for $4.99.