Following the debut of Apple’s MusicKit API, which enables third parties to build apps and web experiences that directly integrate with Apple Music, 2019 was a big year for third-party Apple Music clients on the App Store. We’ve written about several of these apps, but the earliest and highest profile debut of the year was Soor, a meticulously designed client that distinguishes itself with a fully customizable Home view for displaying only the content sections you care about – choosing from things like Recently Added, Playlists, Recently Played, New Releases, For You, and more. Federico reviewed the launch version of Soor and found a lot to like about its unique approach, but he ultimately was disappointed by the absence of certain functionality that’s readily available in Apple’s first-party Music app.

In the nearly 18 months since launch, Soor has improved in significant ways. I adore the throwback Cover Flow-inspired playback screen, where you can smoothly swipe through a horizontal row of artwork, and time-synced lyrics are now available via a tight Musixmatch integration. There are still certain functions you’ll need to pop into Apple’s Music app for, sometimes due to Apple Music API limitations that Soor’s developer can do nothing about, and other times because the app simply doesn’t offer certain features yet – AirPlay 2, for example, is still unsupported. Overall though, for my uses at least, Soor covers enough core Apple Music functionality that there’s very little I need the first-party client for. The biggest absent feature on my wishlist is an iPad app, which I’m glad to see is on the roadmap, especially since iPadOS 14 will soon offer a much-improved first-party Music app.

Soor’s improvements have made it a truly compelling alternative to the first-party Music app, and today’s 2.0 update continues that trend by offering two big new features: magic mixes and release alerts. The latter is a nice addition, but the real pillar of this update is magic mixes.

Magic mixes enable building highly customizable and dynamic mixes using a variety of Source, Filter, Sort, and Limit options. Since these mixes are dynamic, as new music is released or Apple makes changes to its editorially-curated playlists, your mixes update to reflect an ever-changing roster of matched songs.

To get started creating a magic mix, you can tap the new magic mix icon in the mini player, or hit Manage Sections at the bottom of the app to create a mix from there.

Sources for a magic mix can include content both from your Library and from the full Apple Music catalog. On the Library side, you can choose from albums, playlists, loved songs, recently added or recently played music, and more. When choosing sources from the Apple Music catalog you’ll see the full roster of For You1 suggested playlists and albums to choose from, plus all of the top playlists curated by Apple’s staff, or you can select hot or top songs, new releases, or even a custom search term. These source options make magic mixes more powerful than anything I’ve encountered in another music app, and the experience of choosing them is delightful thanks to some design polish in the selection process.

Once you’ve chosen sources for your magic mix, you can move on to filtering rules, which includes 15 different categories of filters spanning things like play count, date added, like state, explicit, title, artist, and much more. The whole process is intuitive as you select a filter then choose the rule for it using parameters like ‘Equals,’ ‘Not Equal To,’ ‘Contains,’ ‘Before’ or ‘After,’ and more.

The final two configuration points for your mix are sort and limit options. Limit simply lets you enter a number of tracks that you want to limit the mix to. Sort options, on the other hand, are plentiful, including things like last played, play count, release year, genre, duration, shuffled, and more. These can then be set in ascending or descending order.

All of this detailed walkthrough is necessary to explain how you can build some wild, fine-grained custom mixes in Soor. The fact that they update dynamically is just icing on the cake.

One of my favorite details about the magic mix feature is that it pairs so beautifully with Soor’s section-based design. Every magic mix you create is accessible as its own Home section, giving you the ability to customize the app’s layout with the music you care about most. For example, I’ve created an extremely simple mix that takes a single playlist and sorts its track order by release date, from newest to oldest. This mix meets a desire I’ve long had for this particular playlist, and now lives at the top of my Home layout. 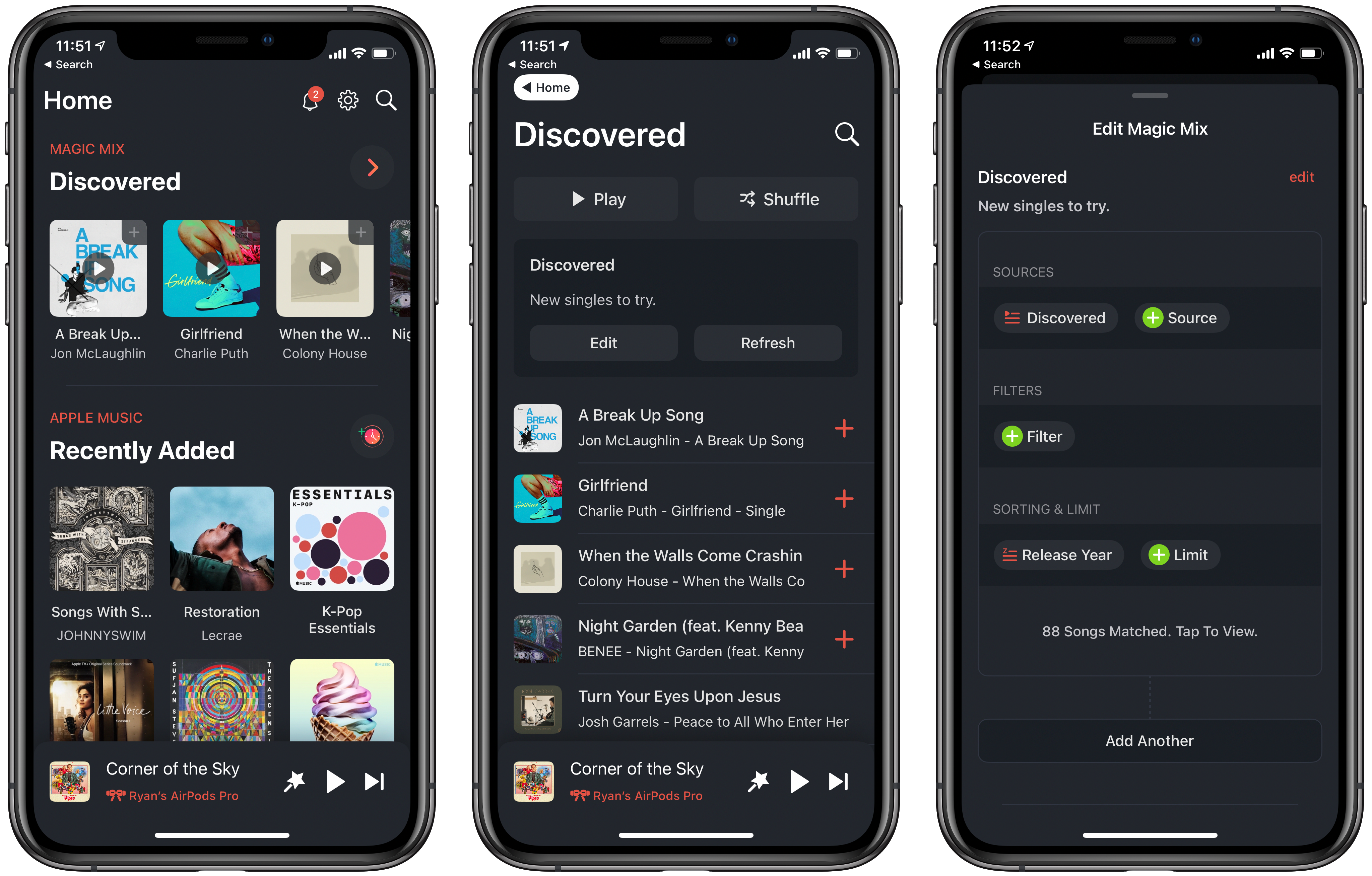 The playlist is called Discovered, and it’s where I save new singles I come across that I want to listen to later. Much of my music listening is album-oriented rather than centering on playlists, but Discovered is my most frequently listened to playlist because it’s where all singles go for me, whether they’re from artists I already love or new ones I find. I never add singles to my Library because they would clutter up my Recently Added screen, so instead I save them to this playlist and keep the ‘Add Playlist Songs’ Music toggle in iOS’ Settings app disabled, ensuring that tracks added to playlists won’t populate my Library.

The problem with this approach for saving new singles is that the first-party Music app offers no option for changing the way a playlist is sorted. So what ends up happening with my ever-growing Discovered playlist is that I hear the oldest songs, which live at the top of the playlist, far too often, while my most recently saved songs remain neglected and often forgotten at the bottom of the list. I could always use Music’s shuffle feature, but that still isn’t quite what I want, which is to simply reverse the order of the playlist so the newest songs play first and the oldest ones play last. With Soor’s ‘Release Year’ sort option set in descending order, a magic mix solves this problem. And I can not only access my reverse-order Discovered playlist as its own dedicated Home section in the app, but I can also quickly kick off playback via a shortcut. 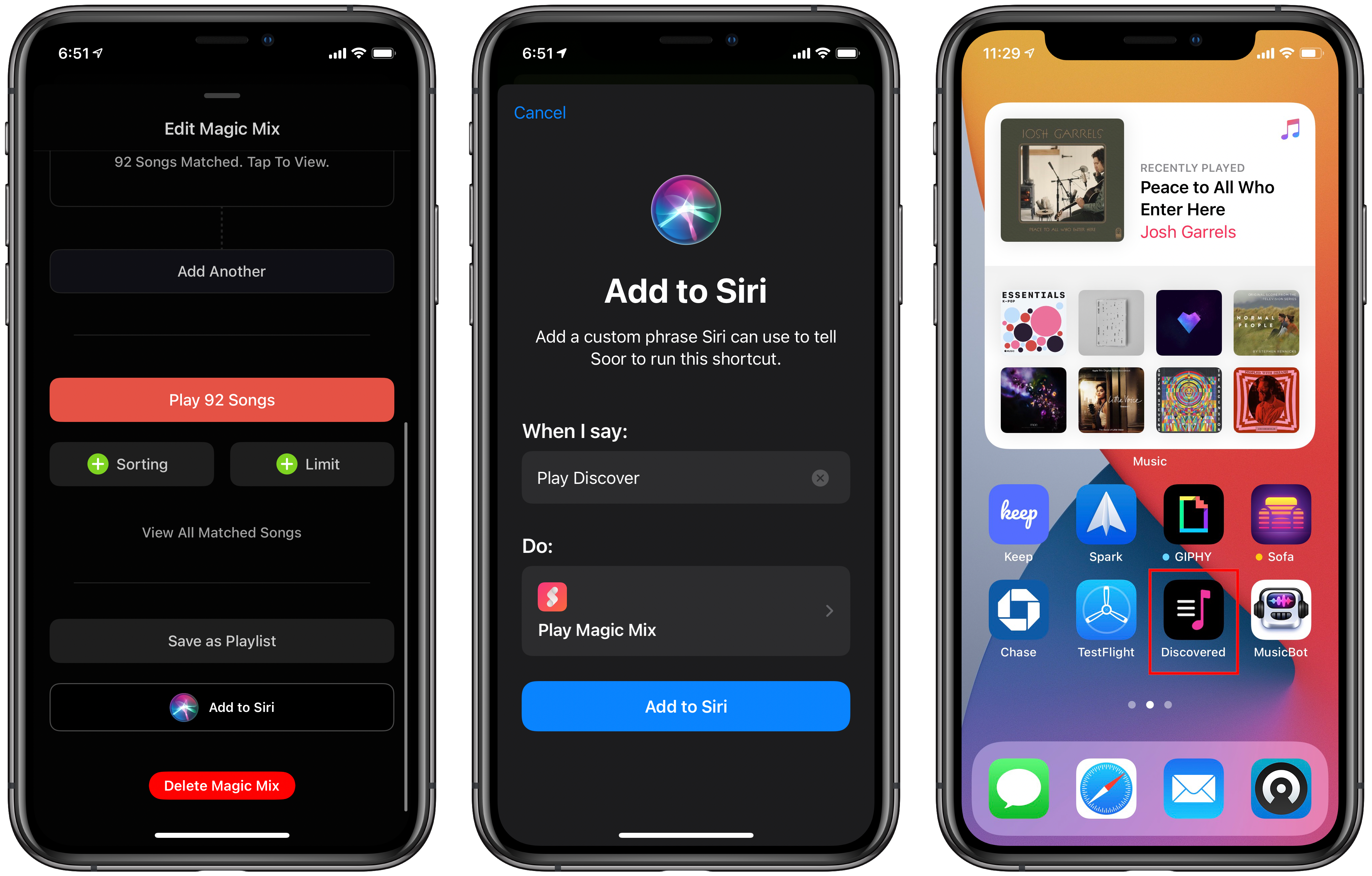 Adding a magic mix as a shortcut via Siri, then to my Home screen.

That’s right, every magic mix you create comes with Shortcuts support. There’s an Add to Siri button at the bottom of each magic mix edit screen, so you can start playing your custom mix with a simple Siri voice command, or by running a shortcut from the Shortcuts app. Personally, I’ve created a Home screen shortcut that kicks off my Discovered magic mix, but another thing I may consider in the future is adding it to Shortcuts’ widget. Whether run from the Home screen, or a widget, or the full Shortcuts app, or even Siri, I love how easy it is to start playing magic mixes.

I won’t go too deep into this, since it’s a feature already available elsewhere such as in Apple’s Music app and the excellent dedicated utility, MusicHarbor. But it’s still worth noting that Soor now offers alerts for new releases from artists you follow, and the implementation details are quite nice.

There’s a new bell icon in the top-right corner of Soor’s interface which you can tap to view and manage release alerts. This screen will show you all artists you currently follow, provide the option of searching for new artists to follow or choose from suggestions that are based on your playback history. The only missing option I’d want is the ability to automatically follow all artists in my Library.

Soor presents new releases not only in the dedicated hub behind the bell icon, but also at the top of the app’s Home view. If there are multiple new releases, they’ll be presented in a stack that you can cycle through by swiping on the displayed music artwork, and there’s an X button in the top-right corner of the banner to dismiss it.

Soor’s release tracking feature more closely resembles the power of MusicHarbor than the minimalist approach of Apple Music, which gives it a unique edge since unlike MusicHarbor, it’s built into a full-fledged Apple Music client, mitigating the need to keep an extra utility app around.

iOS 14 Disclaimer: If you’re using the iOS 14 beta, currently there’s a bug with the Apple Music API that causes certain iOS 14 users to see a ‘Session Expired’ message when pulling new data from Apple Music, which happens upon every app launch. I haven’t had this problem myself at all, but Soor’s developer Tanmay explained to me that it only affects iOS 14 users who newly install the app, not existing users. He has a radar filed, so hopefully the problem will be fixed in a new iOS 14 beta soon, but if you’re new to Soor and using iOS 14, this is a short-term annoyance you should be aware of.

Soor’s debut last year brought a lot of design elegance and worked exactly like my ideal music app would: a single-screen interface with fully customizable sections, so that I see only the music I care about most and it’s all quickly accessible. The app did come with drawbacks though, as Federico’s initial review highlighted.

With its evolution over the last 18 months, Soor has become more compelling than ever. There’s still no iPad app or AirPlay 2, and there will always be certain features exclusive to Apple’s first-party client, but if the strengths of Soor – UI customization, magic mixes, and a beautiful, top-tier design that extends from the Home view to the playback screen – are of greater value to you than its drawbacks, then the app might just become your new favorite Apple Music client.

Soor is available on the App Store as a one-time purchase.