Marvis is a music player that launched on iPhone just two months ago, yet in a 3.0 update today expands its usefulness immensely thanks to a major new feature: full Apple Music integration. With today’s release, Marvis joins the growing list of third-party apps that use Apple’s MusicKit API to offer access to and control of your Apple Music library.

Marvis follows in the footsteps of Soor, which Federico reviewed earlier this year, in prioritizing layout customization as one of its hallmark advantages over Apple’s first-party Music app. Pushing beyond what even Soor accomplished though, in Marvis customization is taken to a whole new level, with fine-grained design options that no other app can compare with.

The primary Marvis interface is made up of single screen: Home. While you can access sub-views dedicated to Playlists, Artists, Genres, and more from the sidebar menu, the app provides such extensive customization tools for Home that, once configured to your tastes, it will become the only screen you need. 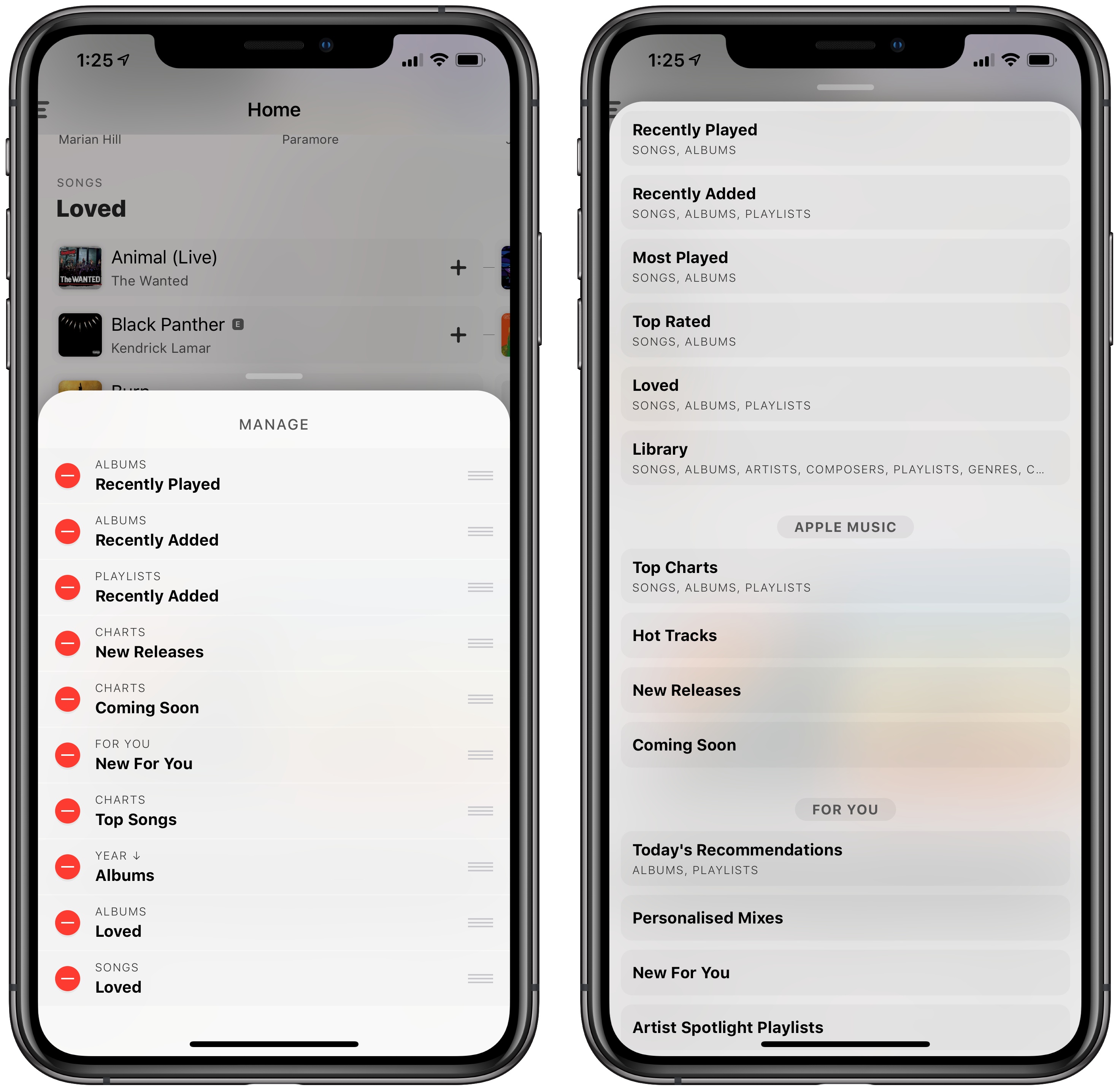 Home is made up of various sections that can be added, removed, and rearranged to your liking. If you’ve used Soor, the basic premise is the same here. However, the number of options Marvis provides – both in the types of sections to choose from, and the way you can customize how those sections work – is truly astounding. Marvis offers a whopping 30 different sections, pictured above, which you can mix and match to create your perfect Home screen.1 You can use as many or as few of these as you prefer, and they’re configured by scrolling to the bottom of Home and hitting Add or Manage.

Offering these 30 sections alone would have been an impressive feat, but Marvis takes things further by providing a variety of customization options for each section. Tapping and holding on a section’s heading reveals the powerful Edit option, where you’ll see options like those shown below. 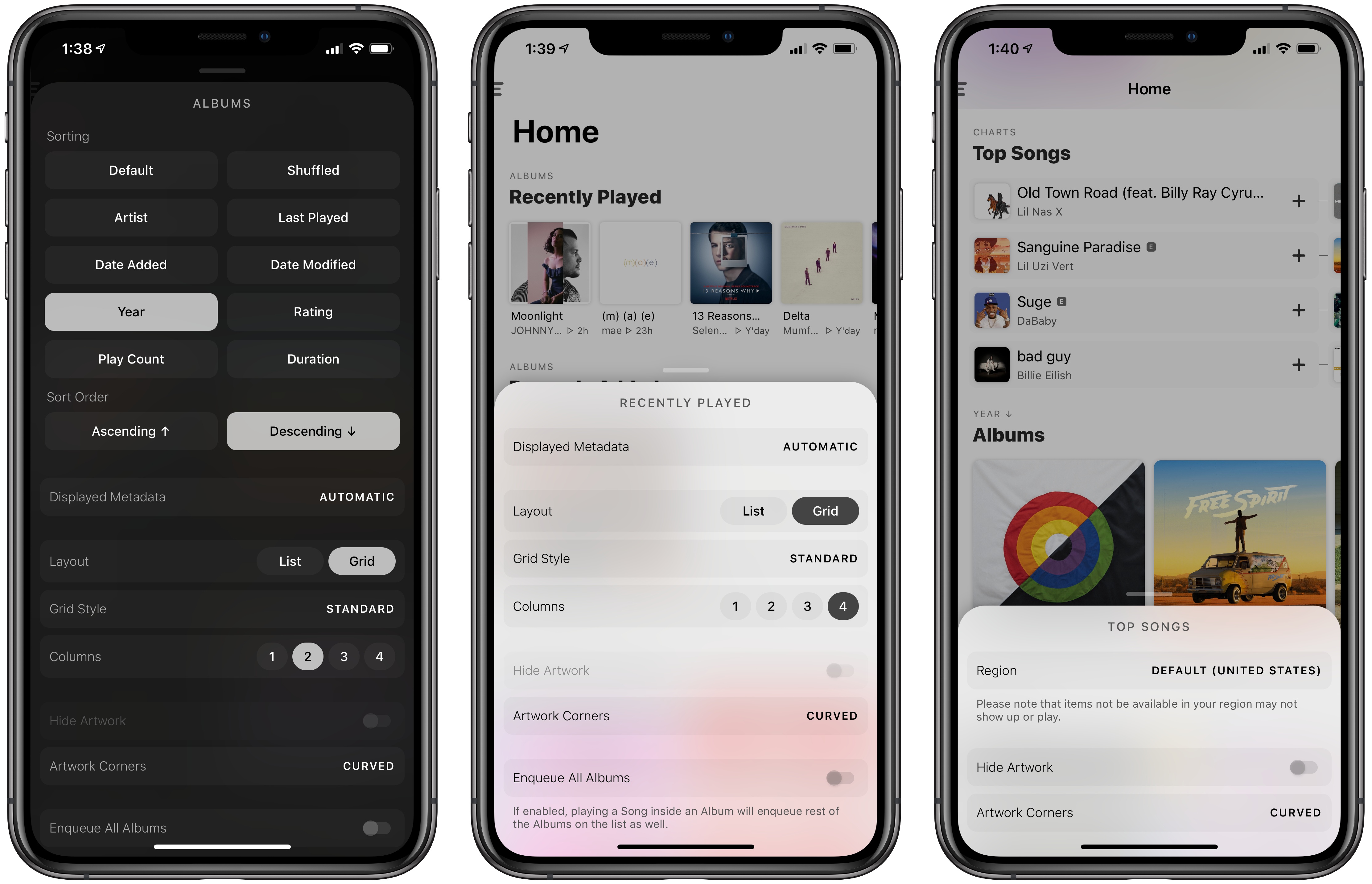 That’s right, you can set up a custom section that’s sorted by play count, date added, artist, year, rating, and much more, in either ascending or descending order. If you’d like, you can even create multiple sections that display the same content type (e.g. albums) but with different sort rules, and both can live in Home at once. All of this adds up to a tool that is the closest imitation of iTunes’ Smart Playlists to date for iOS. While it’s not quite on the same level of power and flexibility as the Mac’s Smart Playlists, it’s easily the next best thing.

Programming your sections to contain the exact content you’d like is merely one part of the power provided by a section’s Edit screen. You can also, from that same screen, modify exactly how a section is displayed in Home. Its layout can be changed from a grid to a list, and if you choose grid, Marvis lets you define how many columns of songs/albums/playlists will display on-screen at once, with options ranging from 1 to 4; you can even change the grid’s style from standard to cover flow or a columned list. If you want to customize which metadata is displayed in a section, options include duration, year, rating, date added, or one of a handful of other choices. Finally, there’s a toggle to hide artwork, or tweak artwork’s corners from the default curved style to being flat or circular instead – that’s right, even something as seemingly insignificant as artwork corners can be customized in Marvis.

Four different ways a section can be displayed.

Drag and drop. Where Apple’s own Music app uses 3D Touch on iPhone as a sort of shortcut for starting playback or adding a song or album to your queue, Marvis employs drag and drop for the same task. There’s no 3D Touch support in the app at all, but as you’re scrolling through Home, you can long-press on a song, album, or playlist then drag it away to see a playback bar appear at the bottom of the screen. This pop-up bar serves as a drop zone for the music you’re holding: you can drop the music on four different sections of the bar to initiate a shuffle, add the music to the start or end of your queue, or simply kick off playback. Though I don’t find drag and drop quite as efficient a shortcut method as 3D Touch, it works adequately nonetheless. 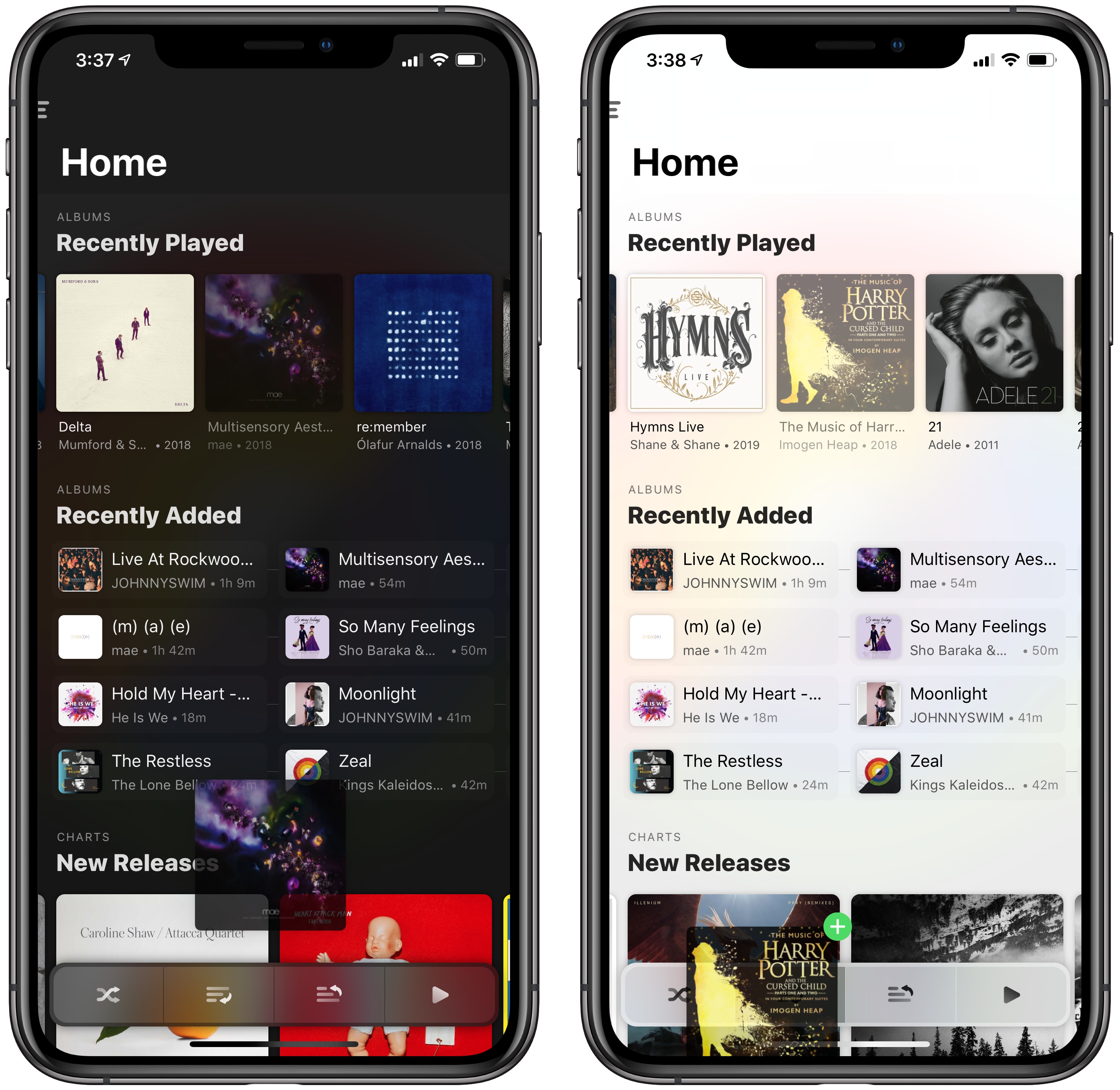 Design and gestures. One of my chief critiques of Marvis is that it seems to lack polish in certain areas of design. The gesture for raising and dismissing the now playing screen, for example, feels unrefined and lacking in smoothness; it’s unlike what I’m used to from the best iOS audio apps. I know that sounds like a small thing, but it’s simply one of several examples I could raise. There’s a gesture for opening the sidebar menu with a left-to-right swipe on any blank part of the main interface, and while the gesture is useful, in execution it feels not quite right – it’s as though the timing or animations aren’t as natural as they should be. Similarly, when dismissing an album or playlist with a swipe down, the app shrinks content at the top of the screen in the process of minimizing, which squeezes down the titles of songs, and the whole gesture simply looks and feels off. Maybe these things only bother me because they seem out of place on iOS, not because they’re bad implementations themselves – in the end though, either way I’m left dissatisfied.

Visually, Marvis is very plain, featuring an abundance of black, white, and grey, with the only color coming from music artwork. It’s not a bad look per se, it’s just overly bland. I never realized how much I appreciated the pops of pink in Apple Music until I used Marvis. You can, from settings, customize the background to different color gradients, which can look nice; personally, I’d prefer a healthy compromise between the all-muted look of the default theme and the all-color background options.

Miscellaneous features. A few other key details about Marvis: the app supports AirPlay 2, it can display lyrics if you have Musixmatch installed, there’s landscape support, Last.fm integration, a dark mode (though not true black), alternate app icons, and more. One of my favorite small features: a toggle in settings to skip disliked songs so that if there’s a song or two you don’t care for on an album or playlist, you can simply dislike them and Marvis will automatically skip those songs in the future.

What’s missing. There are a handful of disadvantages Marvis has compared to Apple’s Music app, some of which are restrictions of the MusicKit API while others are the result of Marvis still being young in its life. There’s no iPad app, though according to the app’s developers that’s in the pipeline for future updates. You can’t currently create or add songs to playlists in Marvis, but that, again, is a feature in the works. If you listen to Apple Music radio stations, those are currently missing too.

Regarding API limitations, Marvis has no way of removing songs from your library or playlists, showing music your friends are listening to, or initiating downloads, and reordering songs in your queue is unreliable, so by default it’s turned off but you can change that in the app’s settings. Some of these restrictions could be lifted if Apple expands the MusicKit API, but there’s no guarantee that will ever happen.

Late last year in a column for Club MacStories I shared my dream of an Apple Music app that could be user-customizable. I envisioned a client where all the content you wanted could live in a single screen that contained only the sections you chose. For me, that would mean prioritizing Recently Added, Recently Played, and New Releases, among other things – but for other users, the app sections they cared about most could live at the forefront of the app. Little did I know that 2019 would bring an app like Marvis that offered exactly what I was looking for.

I’ll confess that I still wish Apple would make its own Music app customizable. Though I’m encouraged by the recent changes made to Music, it’s still largely a one-size-fits-all approach to design. And unfortunately, while third-party clients like Marvis and Soor best Apple Music in customization options, they lack a lot that Apple’s app provides. No matter which music client you use, you have to endure trade-offs.

Marvis shines in providing the most extensive customization options you can imagine. It has its drawbacks, some of which should be fixed in time, while others are entirely dependent on Apple to change, but even in its current state, it’s an exciting new entry to a growing field of Apple Music clients. Whether it’s the right app for you will depend entirely on your priorities: do you value customization more, or is access to the full Apple Music experience a must-have? Depending on your answer, the choice of which app to use is pretty clear.

Marvis is available on the App Store for $3.99.