Leading up to WWDC last month, rumors indicated that iTunes on the Mac was being split into multiple apps, including standalone Music, TV, and Podcasts apps. It was expected that Apple might use its Catalyst technology (formerly known as Marzipan) to base the new Music app on Music for iPad, or vice versa. The hope among many iPad users was that the iPad might benefit from a more robust Apple Music client featuring power user features already available on the Mac, such as Smart Playlists.

WWDC came and went, and that wish was left unfulfilled. While macOS Catalina does introduce a new Music app, it wasn’t built using Catalyst, and as a result the iPad version of Music is light on meaningful improvements this year.

Filling the void left by Apple, however, is a new third-party app called Miximum, which is an Apple Music-integrated utility dedicated to smart playlist creation on iOS.

To get started in Miximum, you need to grant the app access to your Apple Music library, after which it will pull in all your existing playlists so you can choose to include certain ones in any new ‘mixes’ (the app’s term for a smart playlist) that you create.

Hitting the ‘New Mix’ button at the top of the app opens the mix creation menu in a popover window. Creating a mix has two steps, split into separate pages in the creation menu. On the first page you’ll see options to name your mix, assign a photo to it from Apple’s Photos app, and choose the music sources you want the new mix to pull from. The top option, ‘All Songs,’ is easily the most important, but like I just mentioned you’ll also see all your existing playlists here, so if you want the mix to only contain songs from certain playlists, you can select as many of those playlists as you’d like included. Essentially this is like iTunes’ ‘Playlist’ parameter when creating Smart Playlists on the Mac; Miximum simply splits playlists out as a separate ‘Source’ option rather than including them in the app’s available rules.

After you’ve set the mix’s name, image, and music sources, you’re ready to move to the next page and establish rules. There’s a toggle in the top-right corner that determines whether your mix will include only songs that match all rules set, or if you’d prefer it also include songs matching any listed rule.

Rule options in Miximum aren’t quite as extensive as what’s found in iTunes on the Mac, but they come close. There are 23 different rules, including Artist, Song Duration, Play Count, Year, Last Played, Last Skipped, Date Added, Loved, Disliked, Rating, Is Not Explicit, and more. The UI for setting up these rules inside Miximum is extremely simple and intuitive. When appropriate, rules will have a list of conditional parameters you can set, such as ‘is,’ ‘is not,’ ‘greater than,’ ‘less than,’ ‘is at least,’ and ‘is at most.’ You can create as many rules as you’d like, including adding multiple rules of the same type (for example, multiple ‘Artist’ rules). When you’re finished, tap Done in the top-right corner, and your mix is complete. 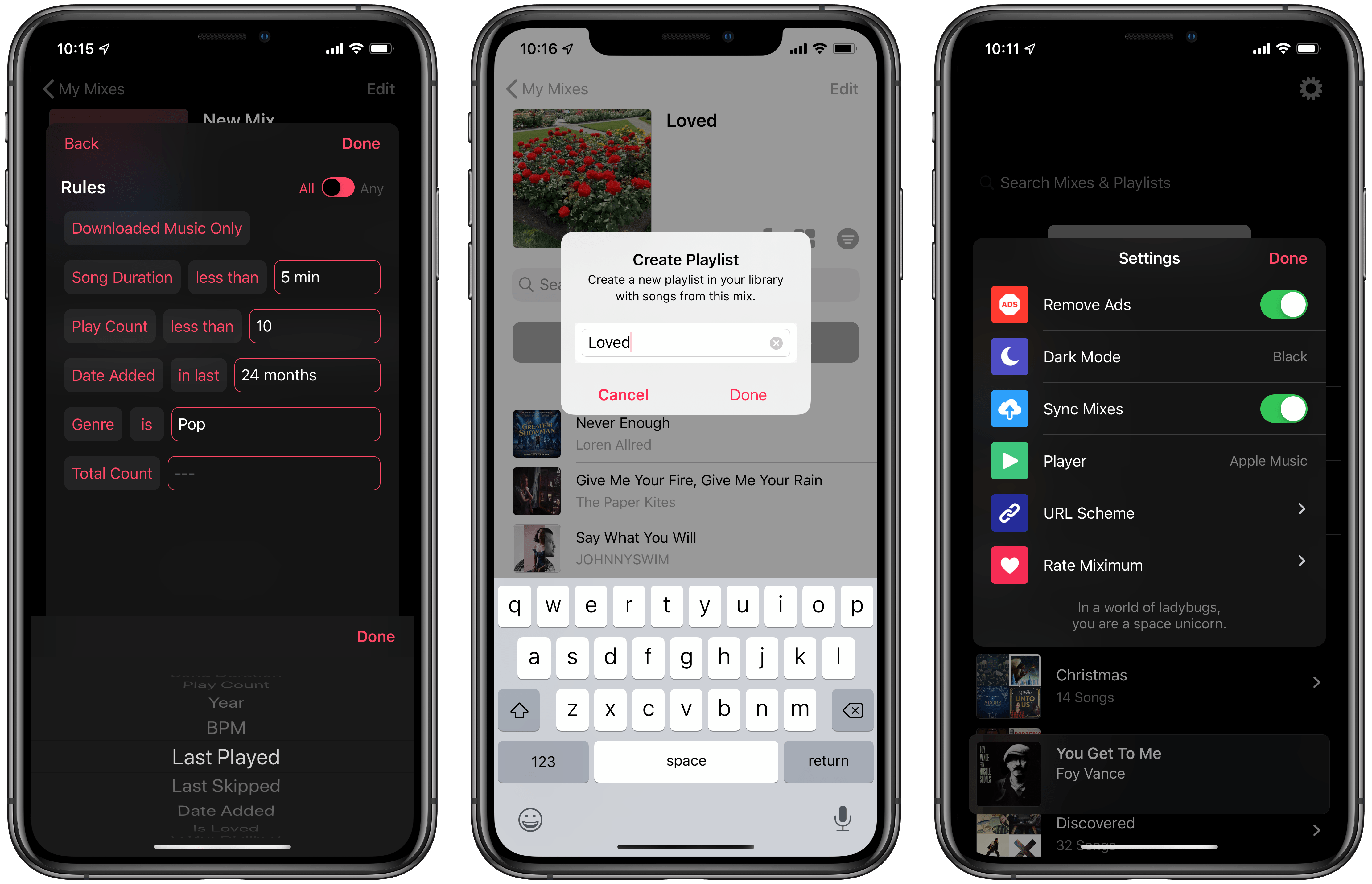 Mixes can be listened to right inside Miximum, but you can also export them as playlists, making the mix available in the native Apple Music app. The only drawback to saving a mix as a playlist is that once the export has taken place, that playlist won’t receive live updates of new songs in the future. iTunes carries the concept of ‘Live Updating’ for Smart Playlists, wherein the playlist will automatically change over time as more or less songs in your library match the rules set for your Smart Playlist. Miximum does the exact same thing, but it only works for mixes accessed inside the Miximum app. Once you export a mix as a playlist, for access inside Apple Music, the playlist remains static even though the mix in Miximum will continue updating over time.

If you always need access to the latest version of a mix, you’ll want to stick with playing it inside Miximum; if, however, having the most up-to-date version isn’t as important, you can use Apple Music to access the exported playlist and simply re-export from the original mix in Miximum every now and then to get the latest updates. Doing so requires just a tap of the music note icon inside your mix, then confirming the playlist’s name and hitting Done. You’ll technically be creating a new playlist every time, but one nice benefit of this is that the newly exported playlist will be placed front-and-center atop Apple Music’s Recently Added section in the Library tab. While other users’ habits surely differ, Recently Added is far and away the place I most commonly access my music, so new exports from Miximum displaying there prominently is a perfect way to remind me to check out the newly updated mix.

Miximum addresses a key missing feature from Apple Music on iOS, and in a way that elegantly complements Apple’s native app. Through integration with your Apple Music library via MusicKit APIs, the app becomes a natural extension to Music and an important utility for users who wish the iPhone and iPad had a more powerful Music app. Thanks to mixes exported as playlists from Miximum, it now does.

Miximum is a free download from the App Store. If you make a tip in the app for a minimum of $1.99, you’ll unlock several Pro features: Dark and True Black modes, ad removal, unlimited mixes, mix sync, and support for Shortcuts and the app’s URL scheme.