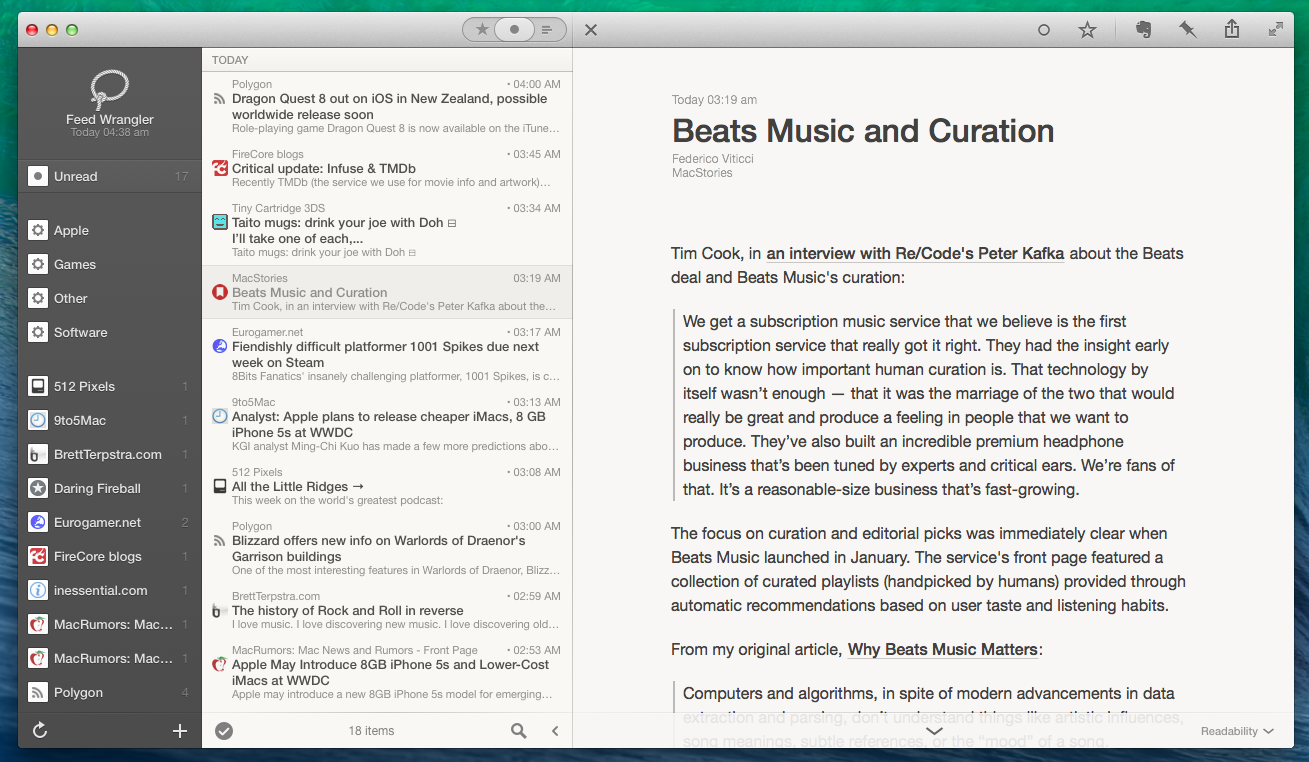 Reeder 2 for Mac, available today on the Mac App Store at $9.99, isn’t the most full-featured RSS reader that ever graced the docks of OS X users. It doesn’t support all the services found in ReadKit, it doesn’t have any sort of smart folder functionality, and it doesn’t bring dozens of breakthrough features that are dramatically different from what Silvio Rizzi offered in version 1.0 of the app. But in spite of what it doesn’t do or what it doesn’t have, Reeder 2 is a superbly polished, fluid, and fast Mac app that lets me enjoy checking my RSS feeds, primarily because of its gesture controls.

Reeder for Mac had a troubled past, on which I dwelt upon when Rizzi, an indie developer based in Switzerland, released the first public beta of his long-awaited Reeder 2.0 last month:

In July 2013, Rizzi pulled Reeder for Mac from the App Store due to the discontinuation of Google Reader (the RSS service that powered Reeder 1.0) as he couldn’t ship compatibility updates in time for Google’s deadline and preferred to jump directly to a 2.0 update that, however, is taking longer than expected. Originally announced for Autumn 2013, Reeder 2 for Mac still isn’t feature complete according to Rizzi, but he’s confident that the public beta should provide a solid preview of the changes he’s been working on while also serving as a way to gather feedback for what will become a paid app on the Mac App Store.

In covering the public beta, I concluded my article noting that Reeder 2 would face “stiff competition” in ReadKit (now an established player in the desktop RSS reading space) but that the app was already impressive in terms of speed and gestures. The product wasn’t finished: the first beta lacked essential features such as sharing services, keyboard shortcuts, and many other customization options that OS X users are now accustomed to in their RSS apps of choice.

Two months into using Reeder 2 every day on my MacBook Air, I’ve grown to like the update a lot, and I’ve realized that I enjoy using it (in spite of lacking extra functionalities) because the basic experience has been exquisitely well crafted.

The gist of the app is unchanged from my coverage of the public beta: Reeder 2 is an evolution of the original Reeder for Mac that offers a refreshed design, support for various RSS services (including my favorite, Feed Wrangler), and a desktop counterpart of the features first seen in Reeder 2 for iOS last September. Reeder 2 for Mac is not terribly surprising in any way – it’s a sequel, but its “more of the same” approach might just be what Mac users who fell in love with the original Reeder were looking for.

The app is fast. Even with thousands of RSS items, scrolling is smooth and responsive; when you navigate across articles, text flies by and images load quickly; clicking through sections in the sidebar or the Unread/Starred/All filters of the top toolbar reveals animations that are not too fast and not too slow, but just right. Reeder 2 feels good in motion, which can’t be said about many Mac apps these days.

Gestures are my favorite aspect of Reeder 2. Once configured in the Settings so they won’t conflict with OS X features like Mission Control, gestures allow you to move across subscriptions, switch between articles, load the web version of an article, and toggle any sharing feature through pinch open/close. They were available in Reeder 1.0, but they’ve been completely rewritten for Reeder 2.0.

Keyboard shortcuts usually get a lot of praise by OS X power users, and rightfully so – they make apps faster to use and you feel in control when you’re able to fully command a piece of software without ever leaving the keyboard. However, I personally think that great multitouch gestures are under-appreciated: as a heavy iPad user, I’m accustomed to swiping with three or four fingers to navigate, and I’m always happy when I sit down at my Mac and I discover that a developer considered users who value multitouch trackpads and the intuitiveness of well-integrated gestures.

Reeder 2 gets multitouch gestures right. They have a pleasant bounce effect associated with them, and they’re completely user-configurable so you can, say, pinch close to copy a link, pinch open to send to Instapaper, and reverse vertical swipes to enable natural scrolling. When I’m in Reeder, I find myself constantly interacting with the app using the trackpad: vertical swipes to scroll articles, a two-finger horizontal swipe to view full webpages, and pinch for my most used shortcuts; everything else (mostly other sharing services) live in the top toolbar. 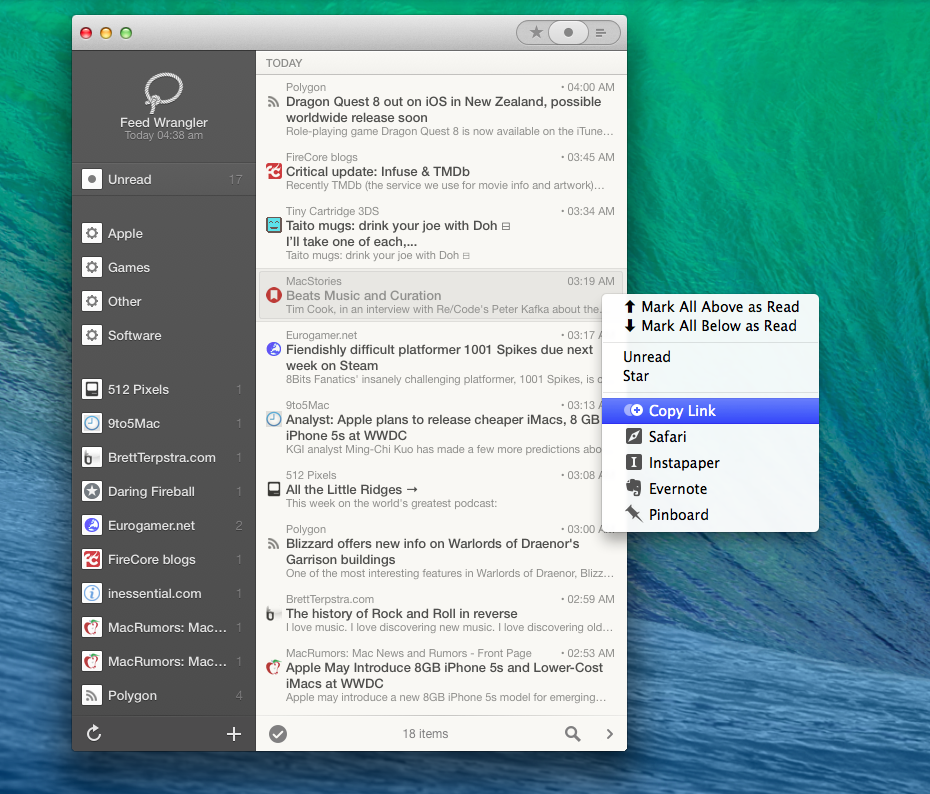 There are other features worth mentioning in Reeder, but most of them are familiar faces from Reeder 1.0, slightly tweaked and refreshed for their 2.0 comeback. There’s a customizable sharing menu that includes third-party apps and services; you can configure keyboard shortcuts to your liking; there’s a minimized mode that puts articles in a single-pane view, resembling a mix of a Twitter client and a read-later app. The approach taken by Rizzi is the same he applied to Reeder for iOS last year: keep what’s working, subtly modernize everything else. In my tests, sync with Feed Wrangler worked well and it’s been comparable to other RSS apps I use ony my devices (Unread, Mr. Reader).

Reeder 2 feels good to use. It’s not as powerful as ReadKit, but it’s fast, fluid, beautifully animated, and it doesn’t care about whether you have 10 or 2000 articles in your queue. Gestures have been implemented tastefully, and everything that was working in Reeder 1.0 has been kept and updated to fit new services and looks. If you liked Reeder 1.0, I highly recommend Reeder 2.0, and I’m glad that the app is back in my dock.