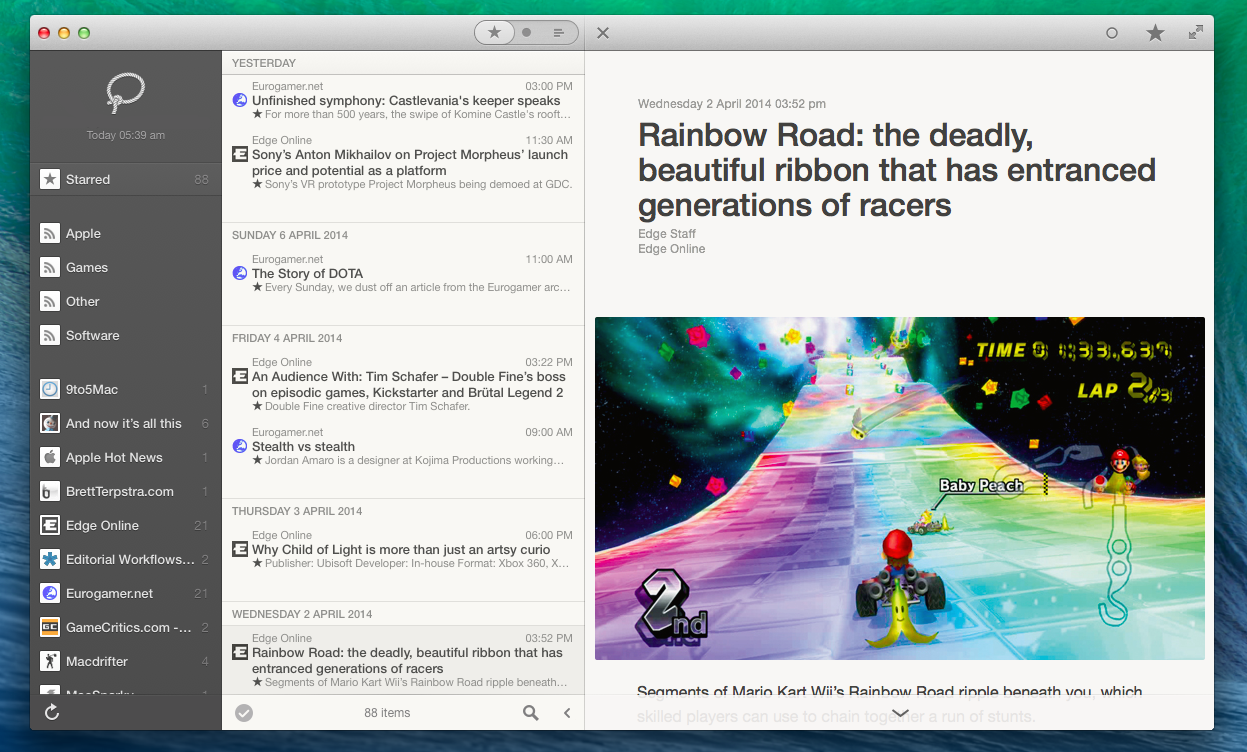 Nine months after being pulled from the Mac App Store following the Google Reader shutdown, Reeder for Mac, Silvio Rizzi’s popular desktop RSS client, is back with a public beta that offers a glimpse at the app’s new service integrations, refreshed design, updated gesture navigation, and new features that will come in the final version.

The Reeder 2 beta builds on the design foundation of the old Reeder for Mac and the latest Reeder for iOS to offer a mix of new functionalities and tweaked layouts that should be familiar to both audiences. In July 2013, Rizzi pulled Reeder for Mac from the App Store due to the discontinuation of Google Reader (the RSS service that powered Reeder 1.0) as he couldn’t ship compatibility updates in time for Google’s deadline and preferred to jump directly to a 2.0 update that, however, is taking longer than expected. Originally announced for Autumn 2013, Reeder 2 for Mac still isn’t feature complete according to Rizzi, but he’s confident that the public beta should provide a solid preview of the changes he’s been working on while also serving as a way to gather feedback for what will become a paid app on the Mac App Store.

Before the Google Reader shutdown, Reeder for Mac was undoubtedly the most popular RSS client for OS X: inspired by the iPad app that launched in 2010, Reeder for Mac retained a familiar design but also added Mac-only features such as widescreen support and keyboard shortcuts. I’ve been trying the beta of Reeder 2 for over a week now, and I believe the best way to describe it would be as a mix of the old Reeder for Mac and the most recent iOS relaunch: the underlying structure is the same, but there’s support for new RSS services, themes, and updated multitouch gestures allow for quicker navigation between standard feed and web views. Just as Reeder 2 for iOS was an evolution of the original Reeder, Reeder 2 for Mac – at least in its current beta form – seems fundamentally in line with the previous Google Reader-only version.

Currently, the Reeder 2 beta supports Feedly, Feedbin, Feed Wrangler, Fever, and, if you don’t like relying on an online service, local RSS with no syncing. Integration with third-party services mirrors what Rizzi did on the iOS side, and there are no differences in how Reeder communicates with Feedly or Feed Wrangler (which I both tested). From a visual standpoint, Reeder for Mac has thus far been refreshed but not revolutionized. Sources, feeds, and articles are displayed in a familiar widescreen layout that uses multiple columns and sidebars for navigation, and the app’s minimized mode can still be invoked by pressing a button (or hitting a keyboard shortcut) that turns Reeder into a Twitter-like client for RSS items. The app has received a new coat of paint – textures have been toned down and shadows are gone in favor of iOS-inspired solid colors – but, overall, the beta is still the same Reeder for Mac, only more modern-looking and in line with the iPad app. It looks good.

Something that stood out to me over the past week has been the new two-finger swipe gesture to open articles in a web view. When you’re reading an item in Reeder 2, swipe with two fingers from right to left and a webpage will come into view, showing a progress bar at the top and subtly bouncing the app’s columns with a very iOS-y elastic feel.

Reeder 2 faces stiff competition in ReadKit, originally a desktop read-later app that has managed to evolve into a versatile, feature-packed RSS client with support for smart folders, multiple accounts, custom services, and reading options. At this point, Reeder 2 is a polished public beta that doesn’t deeply reinvent the way the app works – again, there are plenty of similarities with Reeder 2 for iOS, which was a fine, if perhaps slightly unimaginative update. As someone who subscribes to hundreds of RSS feeds and likes to sift through interesting links at his Mac every day, I can appreciate the elegance and speed that Reeder 2 already exhibits at this stage, but I pine for ReadKit’s advanced filters and smart folders.

On the other hand, ReadKit has had its fair share of technical issues in the past, and Reeder’s speed and simpler approach bring a breath of fresh air to the OS X RSS reader landscape; there’s no denying that, even at this stage, Reeder 2 is already elegant and fast, with plenty of room for improvements and refinements before the final version.

Reeder 2 is not finished. It’s too early for a verdict on the app, and developer Silvio Rizzi will have time to iterate on the app now that a beta is available to the general public. We’ll check back on Reeder 2 for the app’s final release; in the meantime, you can download the Reeder 2 public beta here.