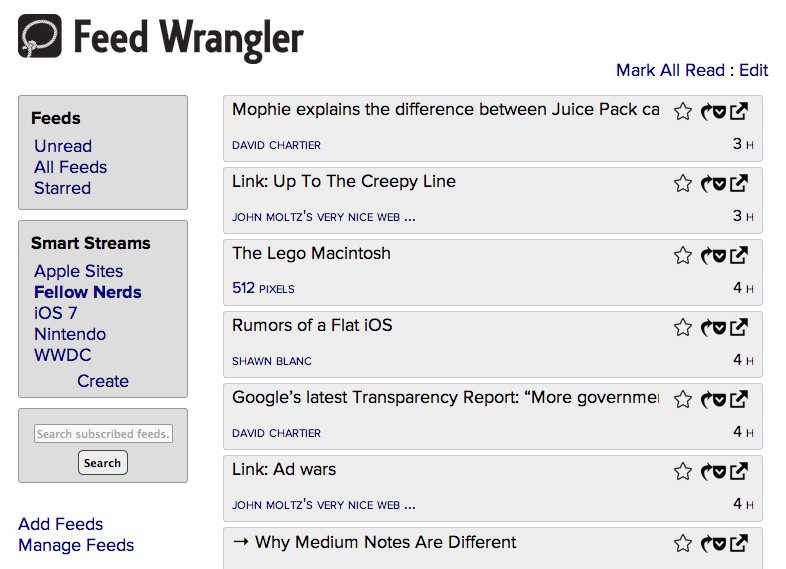 “I wanted to take a slightly different take on the concept of what an RSS platform should do”, David Smith, independent developer and podcaster, told me about his new product, Feed Wrangler.

Soon after Google revealed they would discontinue their RSS service Reader this July, a slew of companies were quick to announce their existing news reading apps would either support “importing” features to let Google Reader users quickly migrate or, in some cases, be updated with APIs cloning the unofficial Reader one, allowing other developers to tweak their RSS clients for new API endpoints. This is what apps and services like Flipboard, Zite, Digg, and Feedly are doing. Instead, David Smith did something different: he announced he’d be launching an entirely new RSS syncing service, called Feed Wrangler, for an annual fee:

I believe the reason that Google turned its back on Reader and left its users hanging is that they were users not customers. I’m not interested in building a platform designed to attract as many users as possible and then work out how to sustain it later. I want to instead build something that is sustainable from Day 1. I want my customers to feel confident that they can expect this to be around long into the future. I want to build a relationship with them and make something they really, really love.

Feed Wrangler, open to the public today, comes with a website, a suite of native apps, and a $19 annual subscription.

“My personal use of RSS is based around quickly triaging the news into things I either want to send to Instapaper, skim quickly, or ignore”, Smith added in our email conversation, “and Feed Wrangler is built to make this workflow as frictionless as possible”. After having tried Feed Wrangler for a month, I agree: while similar to Google Reader (there’s a list of Unread, All, and Starred feeds), Feed Wrangler is unique in the way it lets you organize subscriptions and sift through items published on a daily basis.

As a Google Reader refugee, I was curious to see how Feed Wrangler would handle the migration process. I’m always a little scared to lose the set of subscriptions I’ve been building over the years, or, worse, my thousands of starred items that contain precious links and posts I’d like to always keep handy. There are three main ways to add feeds in Feed Wrangler: you can manually paste a website’s URL; you can upload an OPML file with your feed list[1]; or, the best option, you can grant Feed Wrangler access to your Google Reader account so it’ll fetch all your subscriptions and starred items for you. The latter was, by far, my favorite: it correctly imported all valid RSS feeds, and it displayed those who had outdated URLs (I had a few).

The Feed Wrangler website is simple and clean, somewhat reminiscent of Smith’s previous iOS design & development work, Check the Weather. On the left side of the screen, there’s a sidebar listing Feeds at the top (Unread, All, Starred) and, directly below them, the first unique feature of Feed Wrangler: Smart Streams. 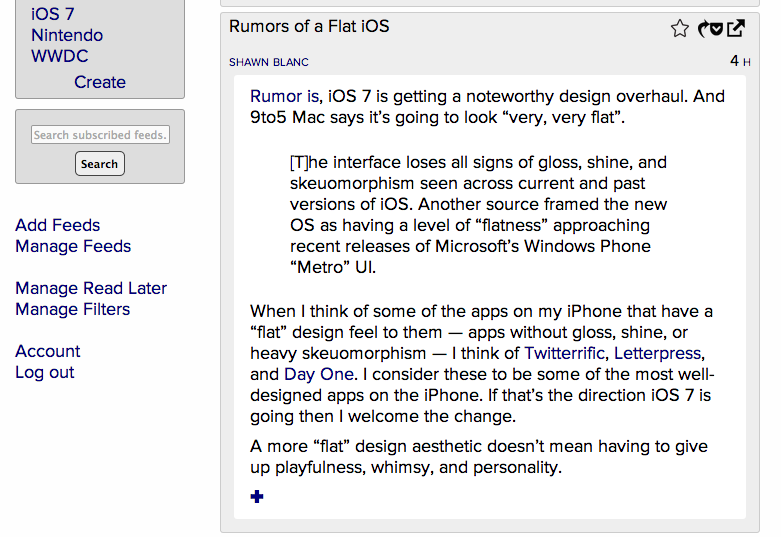 Rene Ritchie wrote that RSS is “the filesystem of the web”, and I think the description is fitting if you consider that folders were Google Reader’s organizational backbone. Following that analogy, Feed Wrangler’s Smart Streams are like smart folders – a more flexible way to mix items from a regular filesystem with additional criteria such as search terms and statuses.

Right now, Smart Streams can create streams of RSS items based on three rules: search filters, unread status, and feed. You can build a Smart Stream that simply contains all posts from your favorite Apple-related websites – what would be the typical “Apple” folder in Google Reader – or you can do more advanced filtering such as all unread items that contain “WWDC keynote”, or every item that contains “iOS automation” from five specific sources. 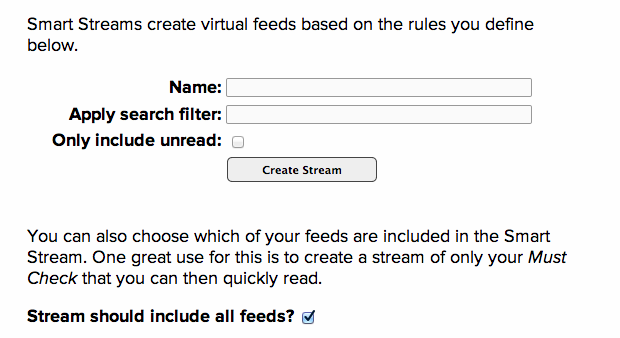 On the Feed Wrangler website, Smith explains that “one great use for this is to create a stream of only your Must Check that you can then quickly read”, and I agree. In my account, I have created a “Fellow Nerds” stream with all items from friends like Shawn and Stephen; I have an “Apple Sites” stream for all the Apple news blogs I am subscribed to; and then I have search-based streams for things like WWDC, iOS 7, and Nintendo. I tend to subscribe to a lot of feeds, and I believe Smart Streams provide a more logical way of organizing feeds in subsets that are not based on a one-to-one relationship, but that instead combine the traditional aspects of folders with searches to create more flexible streams of content.

Smart Streams could do a lot more. Imagine being able to create streams for starred items in a specific month containing a specific keyword (“starred items with WWDC in June 2013”), items that contain a keyword and are “from the past week”, or, for advanced users, RSS entries that match regular expressions. Smith told me that he has “a lot of features and functionality in the pipeline” to continue to improve Feed Wrangler, and I think the highest potential is definitely in extending the Smart Streams’ capabilities.

In terms of presentation, Feed Wrangler’s UI chrome is kept to a bare minimum with a focus on quickly skimming headlines and expanding items that catch your interest. Items are displayed vertically with title, site name, a relative timestamp, and buttons to mark as starred, open in the browser, and read later.

Another feature of Feed Wrangler is, in fact, its direct integration with Pocket and Instapaper to save items for later without relying on bookmarklets or third-party plugins. When you have no Unread feeds, Feed Wrangler will show a link to your read later inbox.

If you’ve already saved an item for later but you didn’t mark it as read in Feed Wrangler, the service can periodically query Pocket or Instapaper and display a checkmark (instead of a read later button) next to those items in your feeds; this is a subtle feature, but it shows the kind of modern approach to RSS consumption that Smith wants to have with Feed Wrangler.

Feed Wrangler comes with filters to automatically mark items matching certain keywords as read. This can be particularly useful if you want to simplify management of feeds that may contain items you don’t care about, but I’d like to see more options in a future update. It’d be nice to be able to create filters for specific websites, filters for keywords only displayed in the title of an item, or filters for keywords that also appear in the content fetched by Feed Wrangler.

Overall, the Feed Wrangler website is a good 1.0 with some omissions that could be fixed quickly without compromising Smith’s original vision. While I understand the focus on quickly skimming headlines, an option to show a 2–3 line inline preview would be nice to get a better idea of an item in your feed list; I miss having auto-refresh with an unread badge in my browser’s tab; and I believe there should be options to activate a larger view (right now the feed list is compact, and long titles can be cut off) and control font sizes. The official Feed Wrangler apps for iPhone and iPad are straightforward, with some nice touches. When setting up the app for the first time, the login screen will show a 1Password button to quickly open AgileBits’ app and look for a Feed Wrangler login; or, when adding individual feeds using a site or RSS URL, you can tap a clipboard button to paste text from the system clipboard without having to bring up the default iOS tap & hold popup menu. When reading an article, you can tap the website’s name to jump to a view listing all the latest RSS entries from that source. 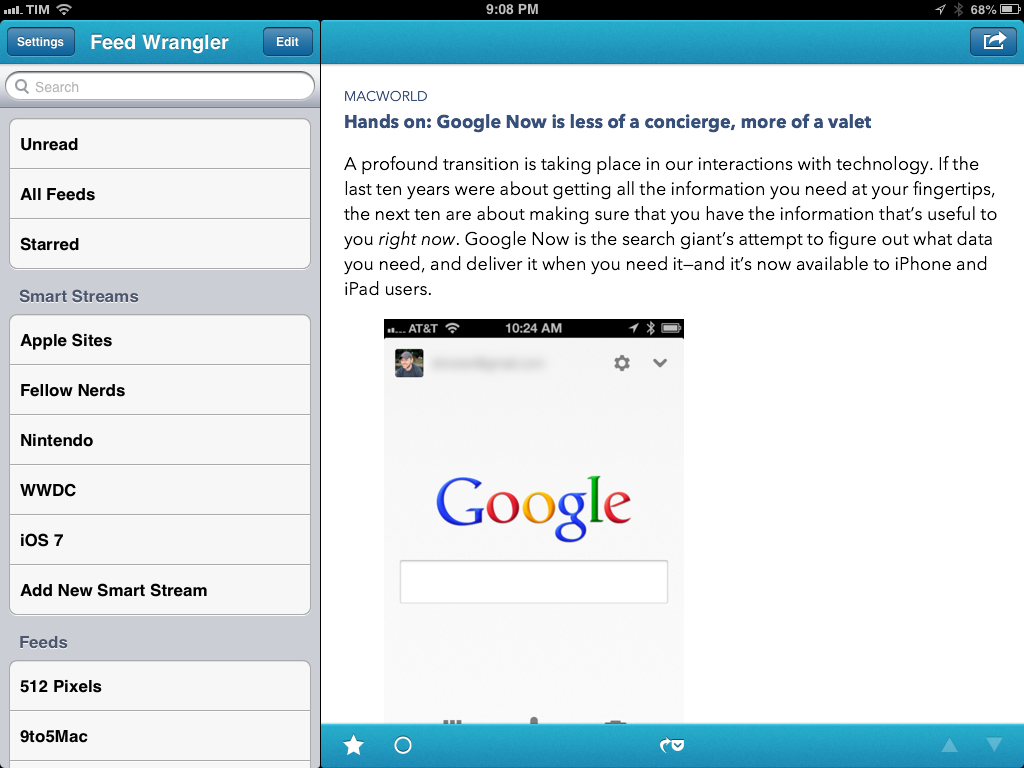 The app’s main screen is, essentially, a replication of the website’s sidebar: Unread, All Feeds, and Starred shortcuts are listed at the top; Smart Streams are located directly below them; instead of being grouped inside a “Manage Feeds” section (like on the website), individual feeds are listed of the bottom, and you can tap on them to get a list of a website’s latest items. Like feedwrangler.net, you can search across all items in your account, create Smart Streams, and log into Pocket or Instapaper to configure your read later service of choice.[2]

In the iOS apps, “Mark All Read” is replaced by a Wrangle button that can be used to selectively mark items as read or send them to Pocket/Instapaper, mark all as read, or check which items have already been saved for later. In terms of sharing options, Feed Wrangler 1.0 comes with an obvious set of Mail, Message, Twitter, Facebook, and Copy URL buttons.[3] 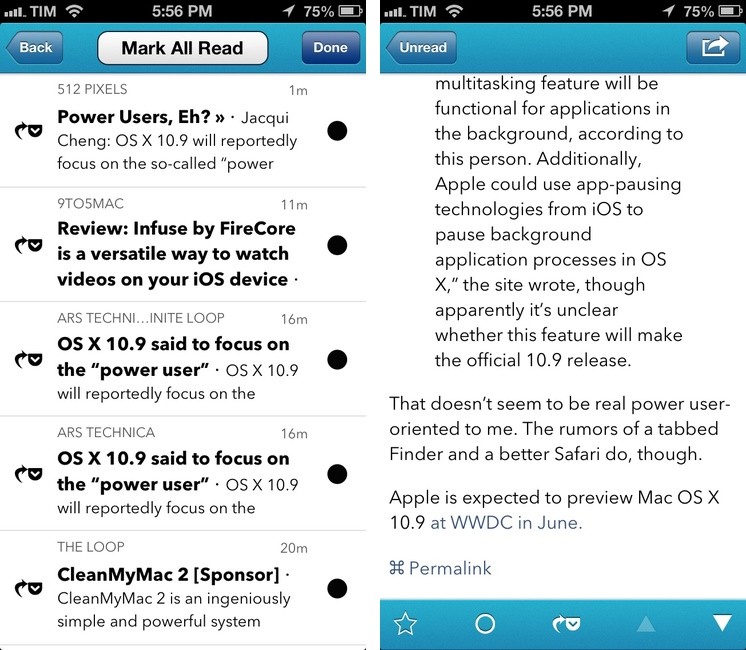 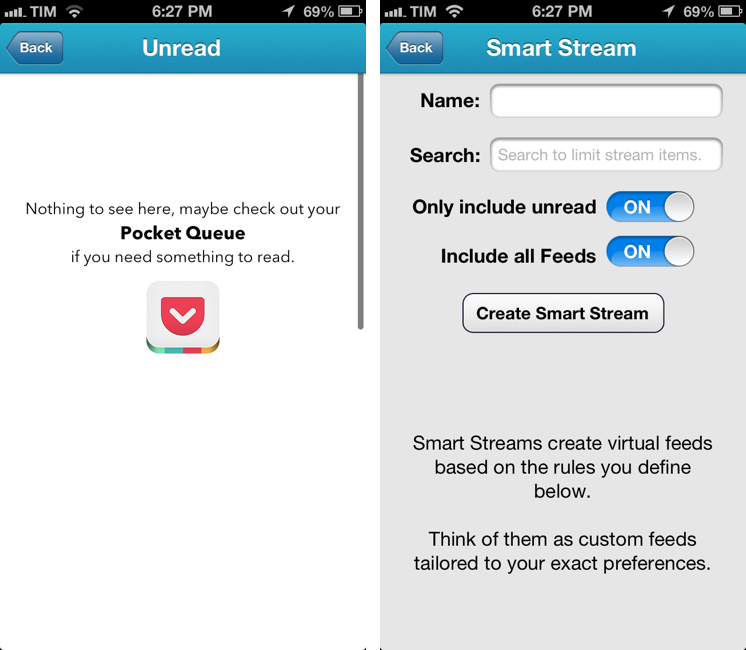 Compared to existing Google Reader clients such as Reeder and Mr. Reader, Feed Wrangler for iOS is limited – perhaps too much. But David Smith is aware of the limitations of his initial release: “The suite of 1st-party applications I include with the service are intended to serve only as a starting point”, Smith said, “and I look forward to seeing the ways developers build upon the platform both aesthetically and functionally”.

In the next “few weeks”, an official API will be released to let third-party developers create Feed Wrangler clients, and I think that will be a key aspect for scaling the service’s adoption rate to accommodate different kinds of users and applications. While the platform is solid and reliable[4], it lacks the beautiful interface polish of Google Reader apps like Reeder, or the power-user functionality of Mr. Reader’s services menu. The official website and apps should serve as an example of what Feed Wrangler can do, but it’ll be up to third-party clients to prove Feed Wrangler’s flexibility.

The transition from powerful apps that I have been using for years to new apps that lack a lot of features has been difficult, but, in the end, I think it’ll be worth it. Google Reader is going away in two months, and I prefer getting used to a Reader-free world now, rather than after WWDC. I trust David, and I know that third-party developers will consider Feed Wrangler’s API once it’s released. I have been enjoying Feed Wrangler’s Smart Streams as a way to skim through feeds with a combination of search and individual sites; I have found the read later integrations to be convenient and useful.

Of all the Google Reader alternatives I’ve been trying, Feed Wrangler struck me as the one with a clear vision, some unique features, a reliable engine, and a simple business model that will encourage the creation of third-party apps with more powerful, versatile feature sets. David Smith says he’s already working on a desktop client and an iOS podcast app that will use Feed Wrangler’s backend for syncing, and I look forward to seeing how user feedback will drive Feed Wrangler’s future versions.

Feed Wrangler is available with a $19 annual subscription, processed through Stripe; the iOS app is available on the App Store, with an In-App Purchase to unlock the same subscription using your iTunes account.