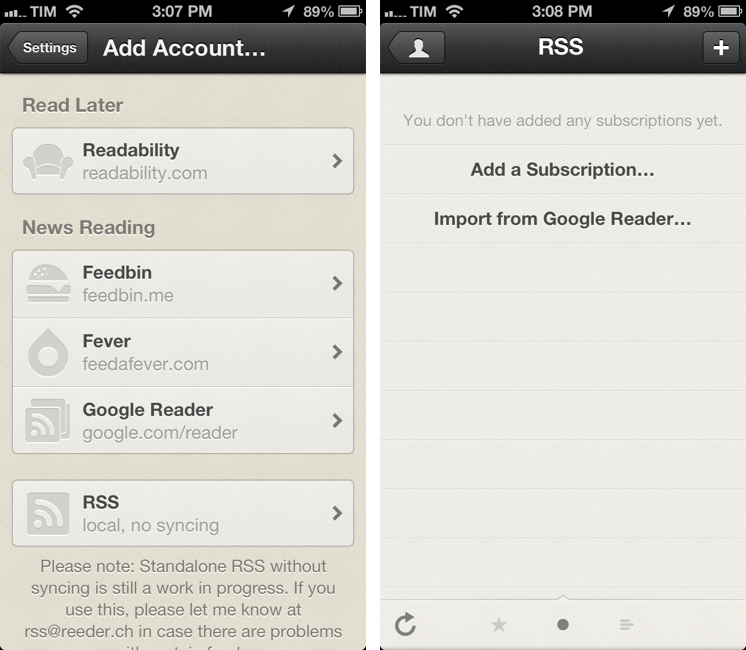 Announced soon after Google’s announcement of the Reader shutdown, popular iPhone RSS client Reeder has been updated today to include support for local RSS subscriptions and Feedbin sync.

In the first major update since June 2012 (when version 3.0 came out), developer Silvio Rizzi has decided to further move away from Google Reader for traditional RSS sync: while version 3.0 saw the addition of Shaun Inman’s Fever, Feedbin is more similar to Google Reader in the way it organizes feeds in groups and lets you view All, Unread, and Starred items. Unlike Google Reader, Feedbin is a paid service that costs $2 per month.

In Reeder 3.1, Feedbin is treated like Google Reader in terms of feed navigation and reading experience; in the Settings > Add Account screen you’ll see a new Feedbin option (at the top of the “News Reading” list) where you can log into your account and start syncing feeds with Reeder. Feedbin is still in its infancy, and, right now, Reeder 3.1 with Feedbin sync works exactly like version 3.0 did with Google Reader.

Reeder 3.1 also adds support for local RSS subscriptions, which won’t sync with any web service or other device running Reeder. Supporting local RSS feeds is anachronistic, but probably the right thing to do to ensure Reeder can keep working in case more RSS services will announce a shutdown in the future. Local RSS support allows you to add subscriptions manually by URL or import them from Google Reader; again, once configured, the reading experience will be the same as previous versions of Reeder 3.x.

Alongside Feedbin and local RSS, Reeder 3.1 also comes with a custom version of pull-to-refresh that’s delightfully in line with the app’s existing graphics and animations.

While Rizzi is busy working on Reeder 2.0 for iPad and Mac, it’s good to see the iPhone app – currently the #16 top paid News app – receiving support for a syncing service that’s starting to gain traction among developers. As Google Reader’s demise nears, it’ll be interesting to see if Rizzi will keep adding new services, and, if so, how long it’ll take for Reeder to be updated again.

Reeder 3.1 is available now on the App Store.