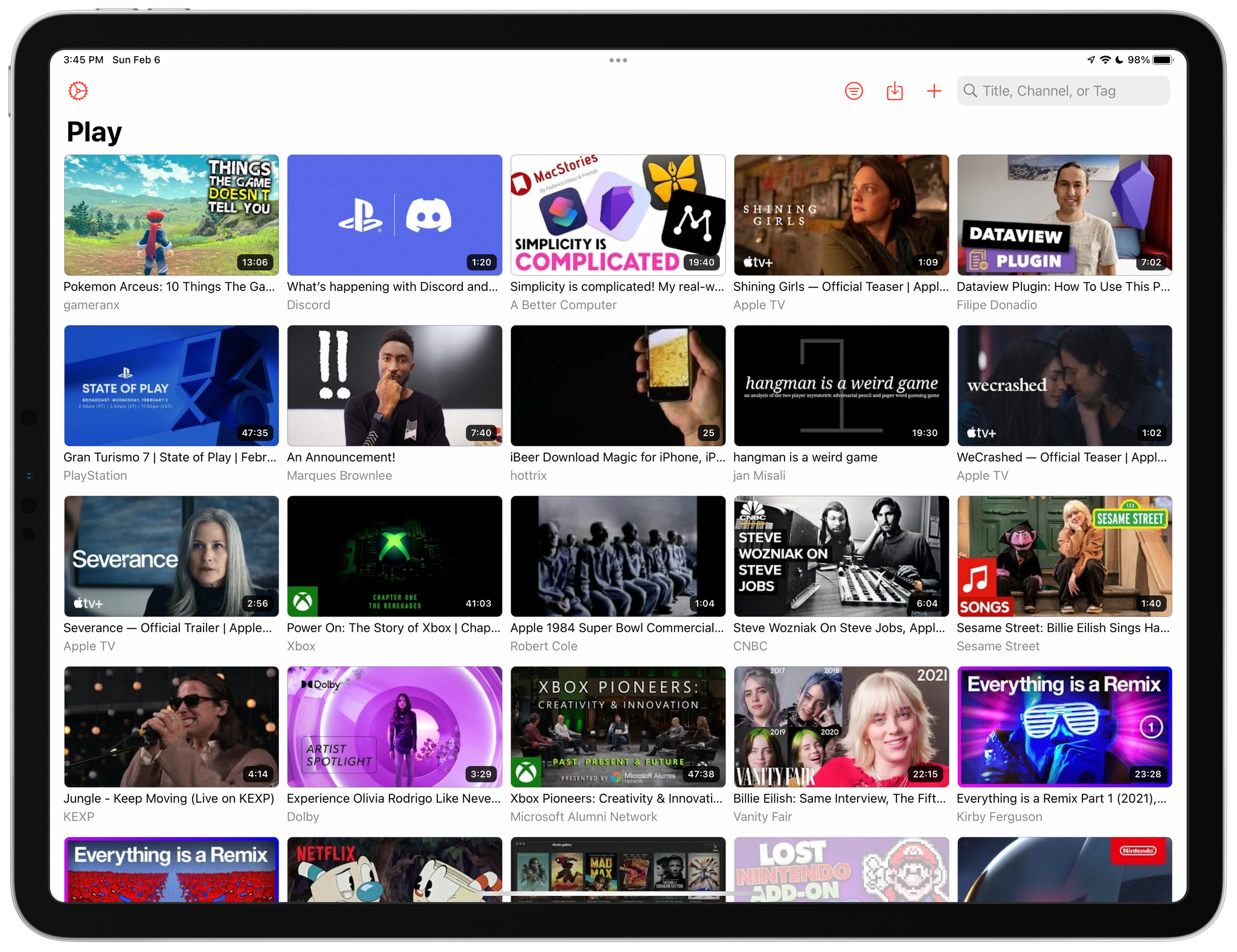 Today, Marcos Tanaka released Play, an iPhone, iPad, and Mac app for saving links to YouTube videos for later. The app doesn’t save the videos themselves. Instead, it saves their URLs, along with metadata, making it easy to organize, sort, filter, and rediscover videos that might otherwise fall by the wayside.

Play is an excellent example of how purpose-built apps often outshine more general solutions. There are many ways to save a YouTube video for later, from a bare URL pasted in a text file to a bookmarking or read later app. YouTube has its own solution, too, with its Watch Later playlist. Each solution I’ve tried in the past works to a degree, but by focusing solely on the experience of saving YouTube links for watching later, Play outshines them all. Any app that’s designed to store media for later needs multiple ways to get content into the app easily, which Play excels at. The app includes an action extension on iOS and iPadOS that allows you to tag video URLs with previously-saved tags or a new one before saving the video to Play. The inline tagging is a nice touch because that initial bit of organization added in the moment goes a long way toward making it easier to navigate videos in the app later.

You can also add YouTube URLs inside Play for iOS and iPadOS one at a time or in batches. The advantage of adding URLs one at a time is that the app detects if a YouTube link is on the clipboard and automatically opens the view for assigning tags and adding the video. All versions of the app also support adding videos using drag and drop, with the iPhone and iPad allowing multiple videos to be dragged into the app at once. You can add videos using Shortcuts too, which I’ll cover below. 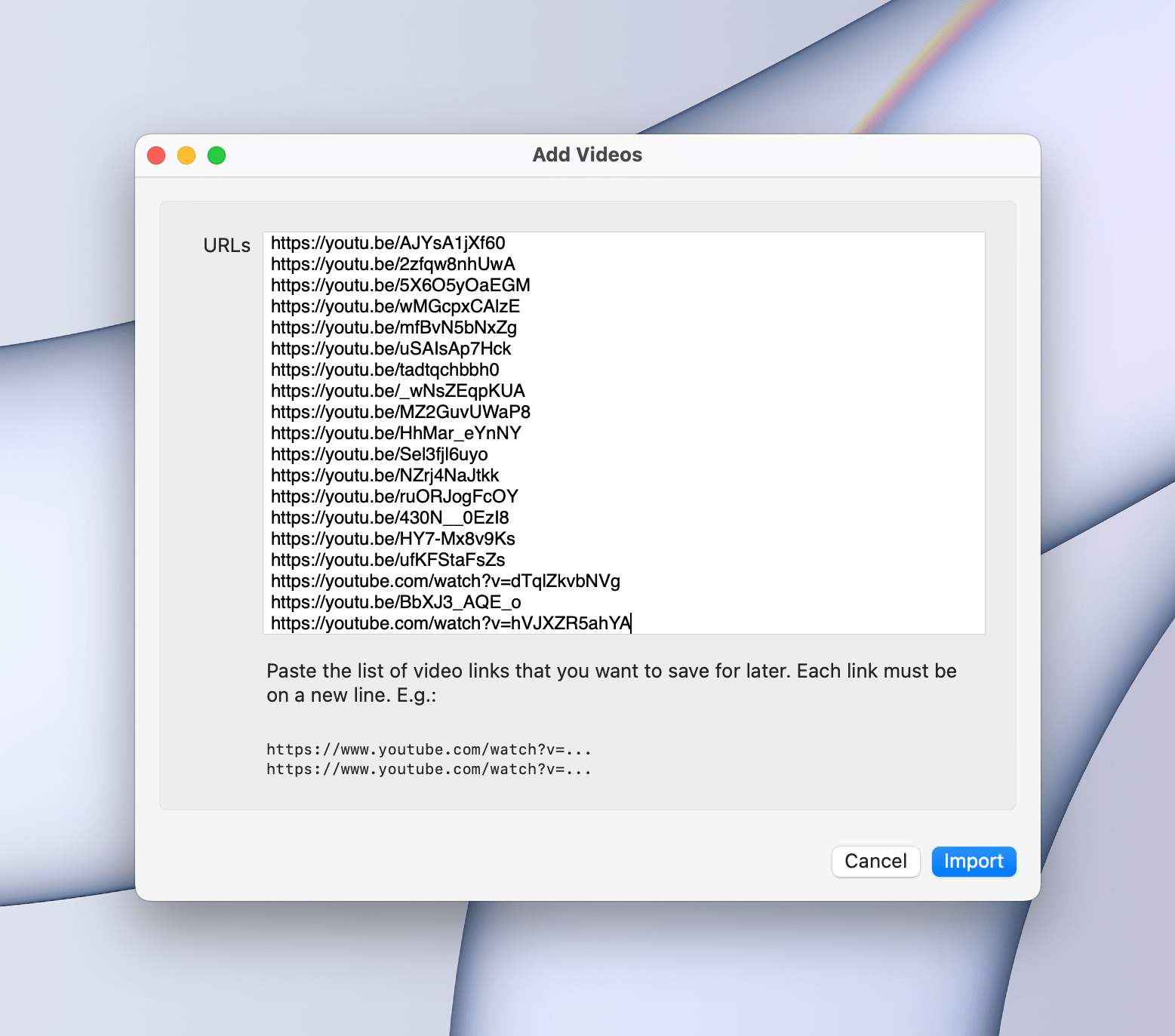 Play can handle long lists of videos with no problem.

The Mac version of the app works a little differently. You can add one or more videos at a time, but there’s no auto-detection of links on the clipboard, although I understand that the feature is slated for an upcoming release of the app. Another difference with the Mac version of the app is that it doesn’t include a share or Safari extension, which would be a nice addition.

Play’s main iPhone and iPad UI offers a choice between grid and list views. The grid view includes each video’s thumbnail, title, and channel name, while the list view is more compact and adds the date you saved the video, the date it was published, and its length. On the Mac, the choice is between a compact table view and list views, with table view resembling the list view in the Finder. Regardless of the view you pick, you have multiple options for sorting and filtering your videos. You can sort by Date Added, Date Published, Title, or Channel, ordered by newest or oldest first. You can also toggle whether watched videos are visible and filter the list by any of the tags you’ve assigned to videos. Watched videos that remain visible are identifiable by the fact that they appear dimmed compared to unwatched ones. Play’s main UI also offers search by Title, Channel, or Tag. Overall, the search, filtering, and sorting options make navigating a large collection of YouTube videos significantly easier than any other app I’ve used. 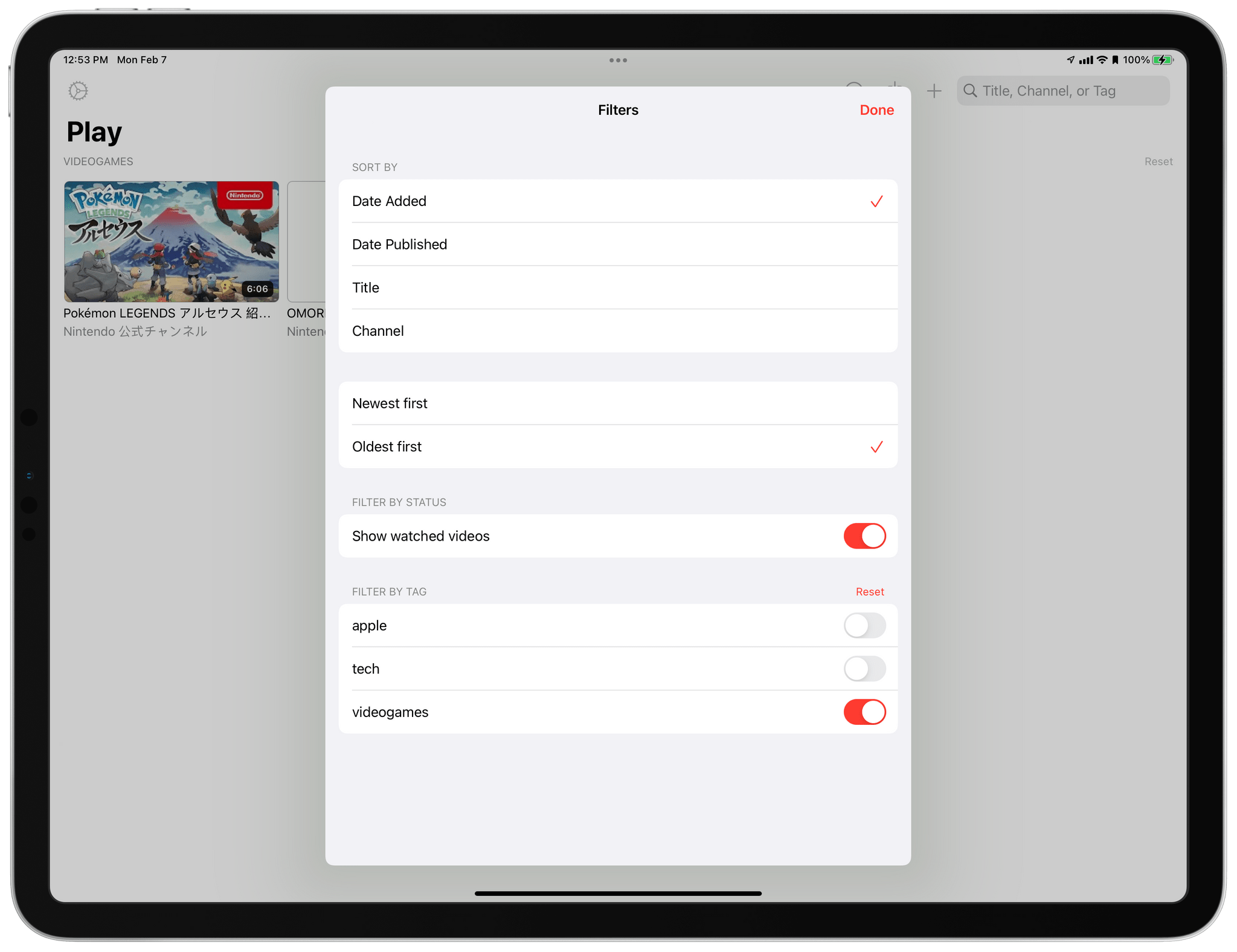 Your collection of videos syncs across devices via iCloud, and you have the option in settings of automatically marking videos you view as watched or deleting them. From settings, you can also batch process videos, selecting multiple videos for tagging, marking as watched or new, or deleting. 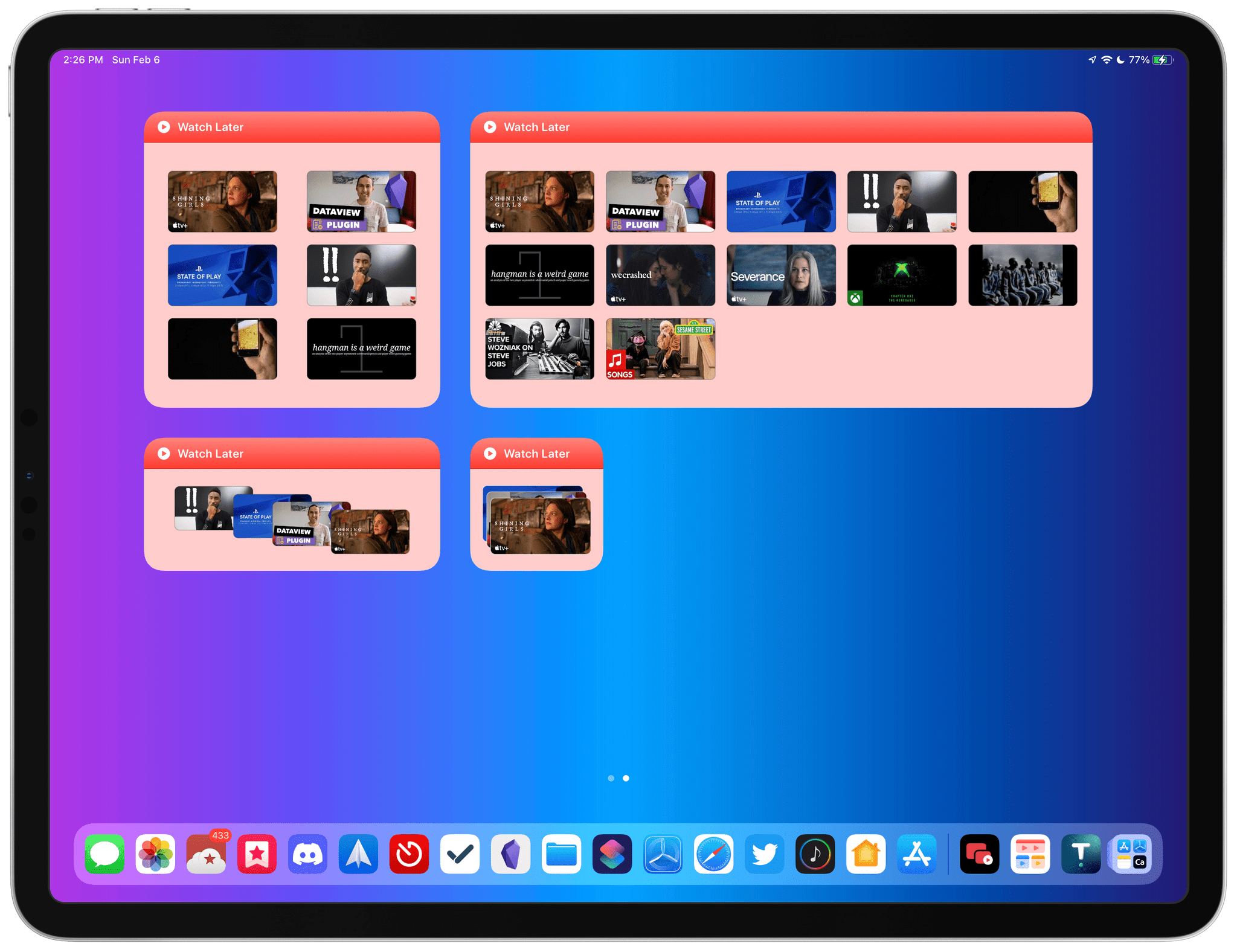 On the iPad, you’ve got four widget options.

The app features three sizes of widgets on the iPhone and Mac and four on the iPad. I’ve enjoyed keeping a large widget with my latest saved videos on my iPad’s Home Screen. The widgets are editable, allowing you to alter the accent color of the widget and apply filters and sorting to the videos displayed. However, if you’re running iOS or iOS 15.4 beta 1 or macOS 12.3 beta 1, there’s a bug that currently prevents you from editing the widgets. (Update: iOS and iPadOS 15.4 and macOS 12.3, beta 2 fix this issue. As a result, Play’s widgets are now editable when running the latest developer beta). 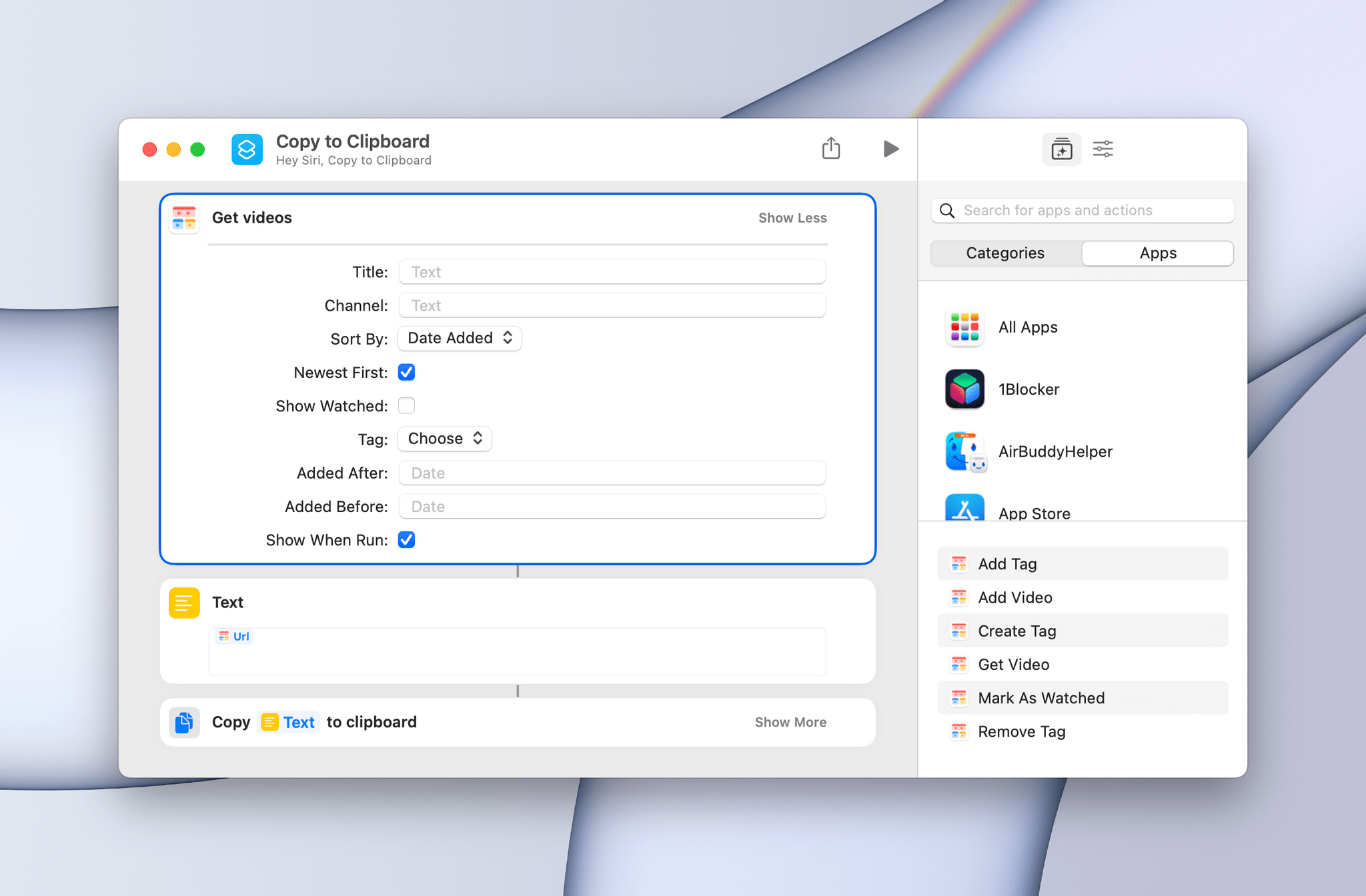 Last but by no means least, Play supports Shortcuts on all platforms. One of my gripes about many apps that save links or other media for later is that they tend to be very good at getting media into their apps but not out again. Play excels at both, making it an excellent choice for customized video workflows.

It’s a powerful selection, of which Get Video is my favorite because it includes many of the filtering options I mentioned above as parameters. Not only can you retrieve videos based on their title, but you can also specify a channel, how the videos are sorted, which tags are included, and the date before or after which they’re added to the app. That action alone provides an enormous amount of flexibility when combined with other apps. There’s an added bonus on the Mac: Support for Charlie Monroe’s excellent YouTube downloading utility, Downie. With a right-click on any saved video in Play or by pressing ⌘D, Downie is launched, and the video begins to download. I love this feature because it makes downloading videos for watching later on my Apple TV dead simple.

I, along with Club MacStories+ members have been putting Play through its paces for almost two months as part of the Beta Beat channel of our Discord community, and what’s struck me about the app is how quickly it has become a staple across all of my devices. It has removed the temptation of interrupting what I’m doing to watch a video I come across because I know I’ll have a hard time finding it again later. Instead, I send it to Play, revisiting it later when I’m enjoying some downtime.

Play is available on the App Store as a one-time universal purchase for $1.99.