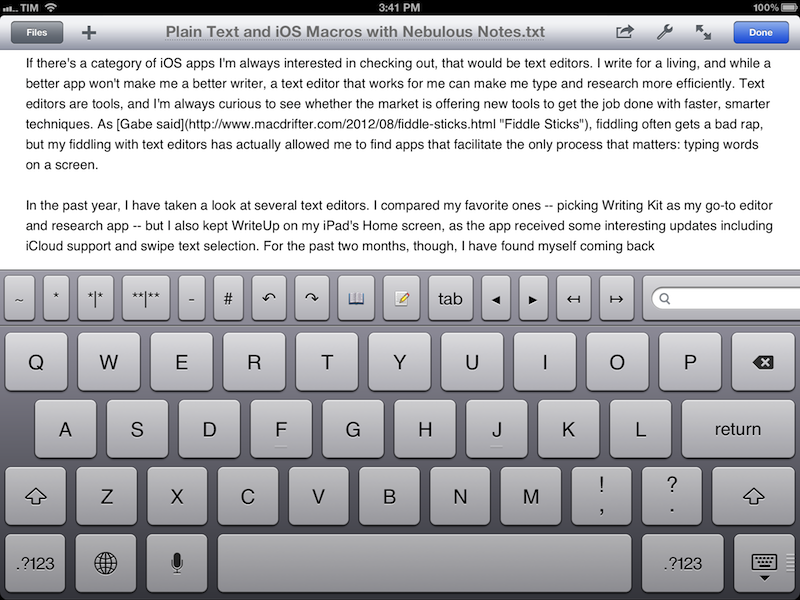 If there’s a category of iOS apps I’m always interested in checking out, that would be text editors. I write for a living, and while a better app won’t make me a better writer, a text editor that works for me can make me type and research more efficiently. Text editors are tools, and I’m always curious to see whether the market is offering new ones to get the job done with faster, smarter techniques. As Gabe said, fiddling often gets a bad rap, but my fiddling with text editors has actually allowed me to find apps that facilitate the only process that matters: typing words on a screen.

In the past year, I have taken a look at several text editors. I compared my favorite ones – picking Writing Kit as my go-to editor and research app – but I also kept WriteUp on my iPad’s Home screen, as the app received some interesting updates including iCloud support and swipe text selection. For the past two months, though, I have found myself coming back to another text editor that I had been previously recommended by various Internet pals: Nebulous Notes. And in spite of my publicly stated praise for Writing Kit, I have been getting lots of writing done with it – so much that I haven’t used any other app for my posts and notes.

Nebulous Notes isn’t the prettiest text editor around. It syncs with Dropbox, but its Open/New File dialog doesn’t share the minimalism of WriteUp or the attention to detail of Writing Kit or Elements. Its sidebar listing available files and folders is organized with an iPhone-inspired tab bar that doesn’t really seem to belong on the iPad. You shouldn’t expect the polish of Posts or Daedalus in Nebulous’ icon and menu choices.

At the same time, however, Nebulous has a feature that single-handedly reinvented my iOS-based writing workflow: macros.

I write in Markdown. In my typical blog post that I want to write on the iPad (or perhaps begin as a rough idea on the iPhone), I usually add italics, bold items, lists, and inline links using John Gruber’s Markdown syntax. I then convert the Markdown to HTML, and refine the blog post on my Mac using the WordPress visual editor, or on my iPad with apps like Blogsy and Posts. Since the rise in popularity of Markdown text editors for iOS, several developers added custom “formatting bars” to their apps to make characters often used in Markdown (asterisks, dashes, square brackets, etc) more accessible to the user. Today, basically any iOS text editor that is regularly updated and supported has a Markdown formatting bar. “Extra keyboard row” is even a category in Brett Terpstra’s excellent iTextEditors roundup.

Nebulous takes the extra keyboard row to the next level as it lets you create macros that can incredibly speed up your writing workflow. You can start with basic stuff like text substitution: like its own in-app TextExpander (which, by the way, Nebulous also supports), you can create a simple button that inserts a long signature or recurring sentence with a single tap. Or, you can create your own formatting buttons to make Markdown keys easily reachable above the regular keyboard. I use this feature so I don’t have to tap on “.?123” on the iOS keyboard (or worse, “*+=”) to insert new bulleted items or make a word bold.

But where Nebulous really “clicked” for me is the special insertion and cursor macros. Unlike other text editors, Nebulous doesn’t “decide” for you which keys should be available above the keyboard; rather, it lets you build your own from the Settings > Customize Utilities menu. In there (and documented extensively on the app’s website as well), you’ll find some examples of what is possible when you start playing around with Nebulous’ macro support. Preceded with the $ sign, there is a macro to insert the current timestamp automatically with one tap. Or, one of my favorites, the $paste command will insert whatever is in your clipboard without having to use the standard Copy & Paste pop-up menu. There are commands to move the cursor to the top or bottom of a document, up or down a line, one word to the left or to the right. And, of course, there are special macros for undo and redo, and even a $find command that creates a search bar inside the extra keyboard row for inline document search (unfortunately, Nebulous lacks search for Dropbox folders).

Nebulous Notes is no Keyboard Maestro due to the limitations of iOS, but its support for macros creates a lot of interesting possibilities for those who write in Markdown. As also outlined by Andy Taylor, you can play around with the cursor and paste commands to easily create reference links, or use the $sel macro to wrap a word between brackets, but type a domain manually after http:// – the list goes on and on.

Nebulous isn’t perfect. Its sync mechanism is somewhat unintuitive, as it differentiates between “device” and “Dropbox” files with no unified interface for directly editing files on your Dropbox – you have to “download” them first, then sync back. Changes are saved automatically, but I think this should be done behind the scenes, with no visual differentiation to complicate things. There are some great sorting options (including one to sort downloaded files by the folder they belong to), but the lack of Dropbox search is annoying and anachronistic. Themes could use a refresh, and the font options aren’t that great. 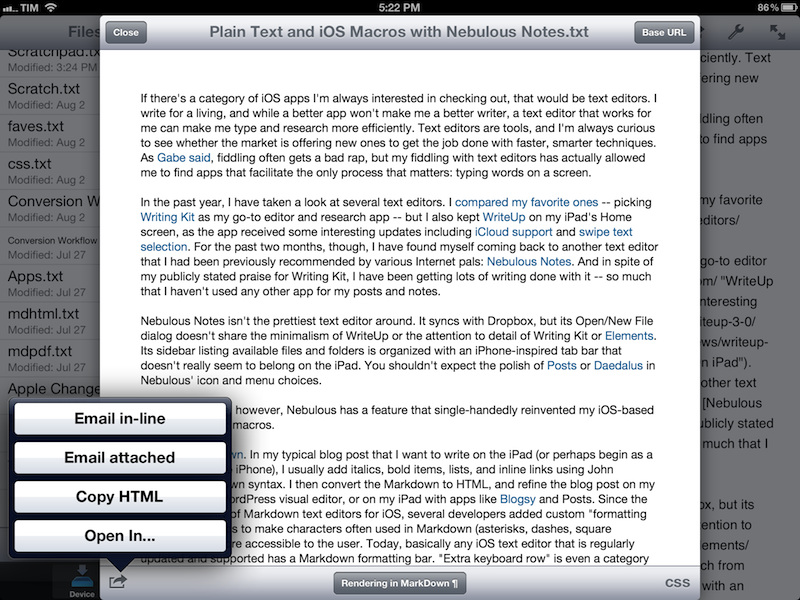 There are some little touches that I particularly appreciate about Nebulous. The app supports custom CSS for Markdown previews, so I threw in Brett Terpstra’s Marked Swiss style to get a more elegant preview for my posts.

Clicking on a note’s name in the upper toolbar will let you rename, close the document, or switch to the previously open note – a welcome option when working with multiple files. The entire text of a note can be copied with a simple “Copy” button, and macros can be exported to Dropbox so you can import them on another device (like the iPhone).

I don’t know if it’s technically possible, but in a future version of Nebulous I’d like to see a feature to “chain” multiple macros together, and the possibility to assign keyboard shortcuts to macros, which would be neat when using an external keyboard.

Nebulous Notes doesn’t have all the features of Writing Kit or WriteUp, but its macro implementation lets me write faster, leveraging Markdown to produce clean HTML I can use for my blog posts.