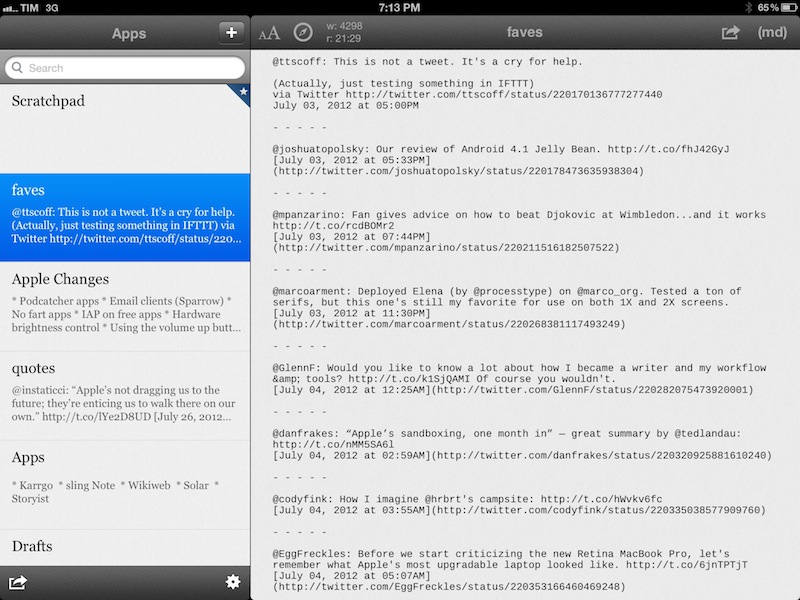 WriteUp is one of my favorite text editors. Since I published my comparison of text editors for iOS – with a focus on the iPad –the app has been vastly improved thanks to a major 3.0 update that added iCloud sync, a split browser, and possibility to “pin” notes and folders and mark them as favorite. While other text editors like Writing Kit may have better researching tools, or serious automation features like the macros of Nebulous Notes, I still like the streamlined UI of WriteUp to easily navigate across my Dropbox folders (the app can open any folder or sub-folder in your Dropbox) and create notes that require copy & paste from a webpage.

When version 3.0 was released, I wrote:

With strong sharing options, support for Versions (another feature most iOS text editors are lacking), images, custom CSS previews, and all the other features of version 2.0, WriteUp 3.0 has still some rough edges, but shows an incredibly promising, and possibly even more powerful text editing future.

With version 3.2, released earlier this week, WriteUp aims at making its text editing more “powerful” by addressing a popular concern of users of iPad text editing apps: text selection. Inspired by the Hooper Selection concept video that made the rounds back in May, WriteUp 3.2 allows you to move the cursor on screen by swiping with two fingers on the virtual keyboard. You can also swipe with three fingers to select text.

While slightly different from the concept video (apparently, several developers have struggled to find ways to activate the text cursor or iOS text selection with gestures performed directly on the content area), WriteUp’s implementation is still solid and, in my opinion, one of the best so far (a number of iPad apps followed up in recent weeks with similar takes on cursor navigation and text selection, all of them implementing two-finger swipes in different ways).

The fact that WriteUp’s swipe selection happens on the keyboard doesn’t, however, trigger keystrokes, and it can be used both vertically and horizontally. In my workflow, this is particularly useful to navigate Markdown list-based documents I create in Nebulous Notes (thanks to macros) and make changes without having to manually (and slowly) select everything. Most of all, I like how WriteUp’s swipe selection doesn’t get in the way with a custom UI and additional virtual trackpads (like other apps do).

WriteUp 3.2 also adds new features like research bookmarks and history suggestions, and new fonts. It’s a good update, and I recommend it. Get the app here.