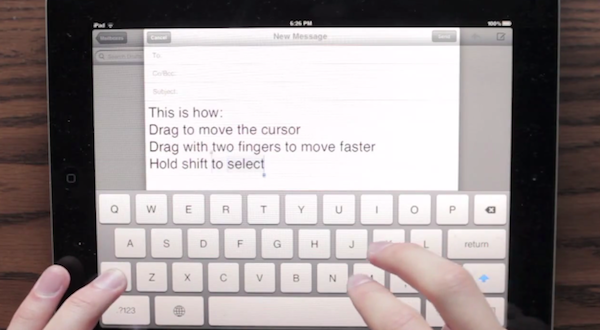 Remember how, before the iPad was unveiled in January 2010, speculation was running wild as to whether Apple would simply use a larger virtual keyboard on the device? Back then, some rumors claimed the bigger nature of the device would force Apple to come up with some crazy and revolutionary way to type text on screen. As it turned out, Apple simply replicated the iPhone’s soft keyboard on the initial version of iPhone OS 3.2, making it almost laptop-size. In fact, the biggest change to the iPad’s software keyboard only happened with iOS 5.0 last year with the introduction of the split keyboard.

That’s not to say everything related to the iOS keyboard is perfect and Apple should stop improving on it. As the plethora of Dropbox text editors have showed, there is a need for different, possibly customizable keyboards that give better access to text selection tools.

In my list of wishes for iOS 6, I forgot to mention I really would like to see easier, faster text selection coming to the iPhone and iPad. I believe iOS’ text selection method is one of the best around, yet Apple could do better. For writers, selecting text – not typing it – simply isn’t nearly as fast as on a laptop. And the problem is not the keyboard – the issue persists with external Bluetooth keyboards – it’s the design of iOS itself that forces you to get your hands off the keyboard to manipulate text.

iDownloadBlog has posted an interesting concept video by YouTube user “danielchasehooper”, showing an interesting possible take on text selection on the iPad. By allowing users to tap and swipe on the keyboard, this system could, in theory, allow for faster selection, also in combination with keys like Shift. Almost every area of iOS now supports taps and swipes: why not the keyboard?

Concepts are what they are – ideas – but sometimes Apple seems to consider them. I don’t know if this video will turn out to be a feature Apple will evaluate – albeit it really makes a lot of sense in my opinion, design-wise – but I sure hope something’s cooking for iOS 6 in regards to text selection.