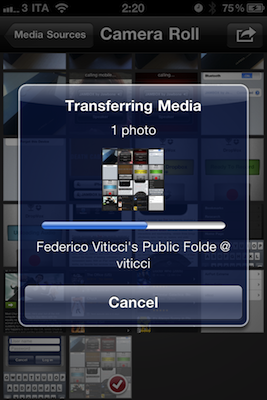 I share a lot of screenshots and photos between my iPhone and Mac every day. Up until today, I’ve relied on third-party apps like iFiles to import pictures into its library and get them on my Mac using Cyberduck, which can connect to iFiles’ built-in WebDAV server. PhotoToMac, a $1.99 app by Galarina, improved my workflow with a system that allows me to import photos and videos without using additional Mac apps. Files shared with PhotoToMac, in fact, end up directly in the Finder.

PhotoToMac works like this: instead of requiring a server app on your Mac, or something to connect to an app’s WebDAV / FTP instance, it plugs into your Mac’s Finder using OS X standard File Sharing features. You can activate File Sharing in System Preferences, and make any folder on your Mac or external drive shared on your local network. PhotoToMac will find the shared folder and send files straight to it. That’s it. No menubar server apps, no additional software – it all works through the Mac’s default sharing features. And it’s great, because it’s fast, reliable and also works with disks attached to an AirPort Extreme station or Time Capsule. I just tested this and it works really well.

Photos contain metadata, videos are transferred in full quality without compression and there’s support for Events and Faces saved in the iOS Photos app. When run on the iPad in compatibility mode, the app can import Camera Connection Kit pics and RAW files. GPS information is saved as well.

The advantages of an app like PhotoToMac are obvious: it works out of the box with any Mac that has File Sharing enabled, no other apps need to be installed to import files and these files don’t go under any weird compression scheme. It’s as simple as it gets.

PhotoToMac is available at $1.99 in the App Store. If you do a lot of iOS-to-Mac photo and video sharing every day (or if you like the idea of batch importing hundreds of photos onto your network disk) this is highly recommended.