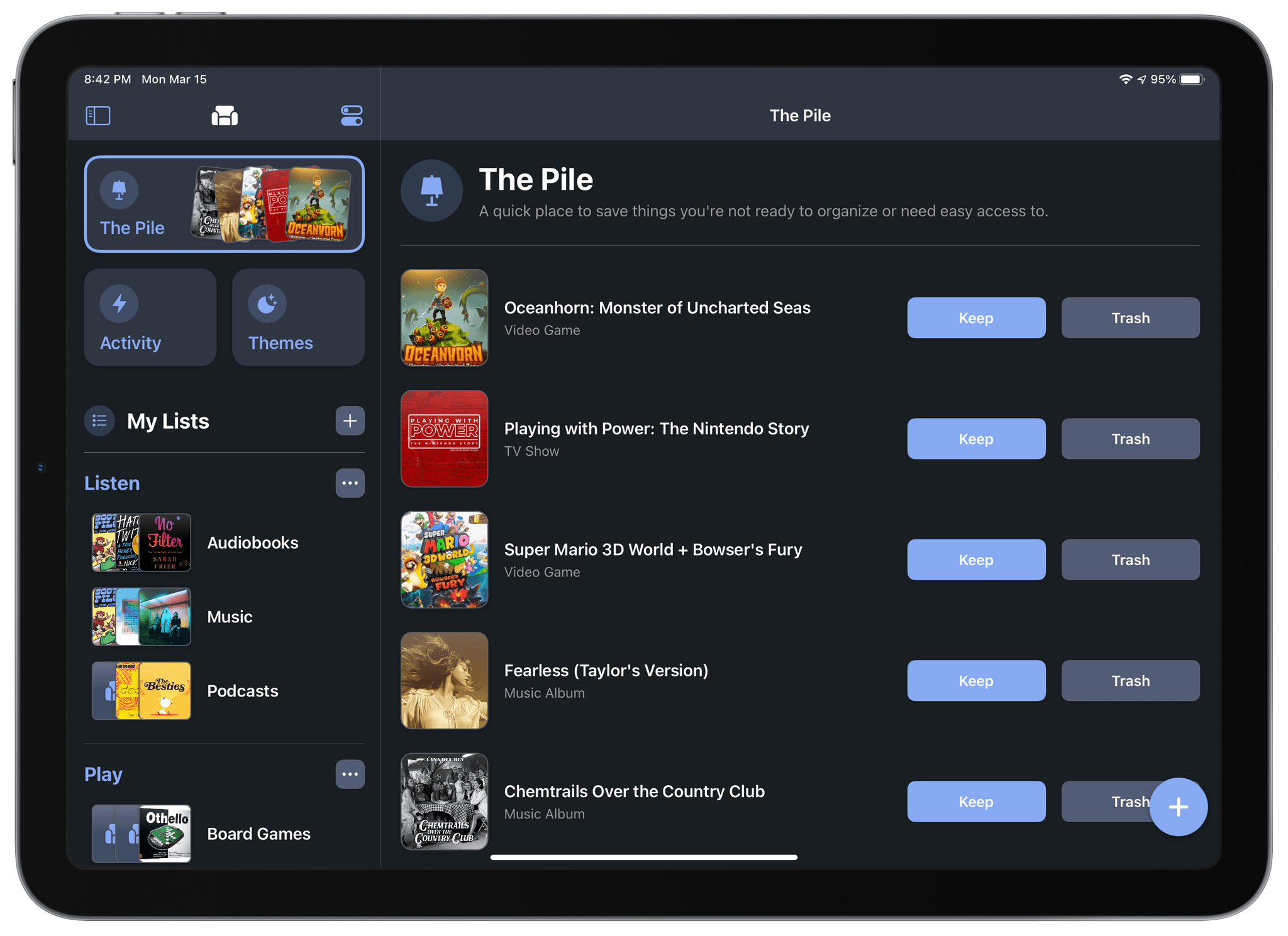 It’s not new to this version of the app, but I’m a big fan of ‘the Pile’ a special Sofa list that acts as an inbox of sorts.

Audiobooks have their own category that is separate from books. Apple lumps books and audiobooks together in its Books app, but the two are different enough, especially in the contexts in which they’re enjoyed, that I think the separate category is the right call.

Sofa has also added board games, marking its first expansion into physical-only media. I don’t play board games very often, but I expect there are many people who will get a lot of use out of this category.

It’s good to see Sofa branching out into other categories, and I’d like to see even more, like comics, added in the future. However, the expansion adds a layer of complexity that may require design changes if more categories are added. Tapping the big plus button to add media reveals all eight categories. One or two more could probably be added to the current design, but it’s starting to get crowded. One option that might help would be the addition of a setting to hide any unused categories.

If you’ve invested time and effort building your Sofa lists, you don’t want to risk losing them, which is why I’m also happy to report that Sofa now backs up your library of media automatically to iCloud Drive. There’s a button next to each backup that lets you restore to that previously-saved version.

Sofa also supports manual backups that can be sent to any app that accepts files via the share sheet. To restore manual backups, the app has a new ‘Import’ feature that lets you pick previously-saved sofabackup files using the system file picker. 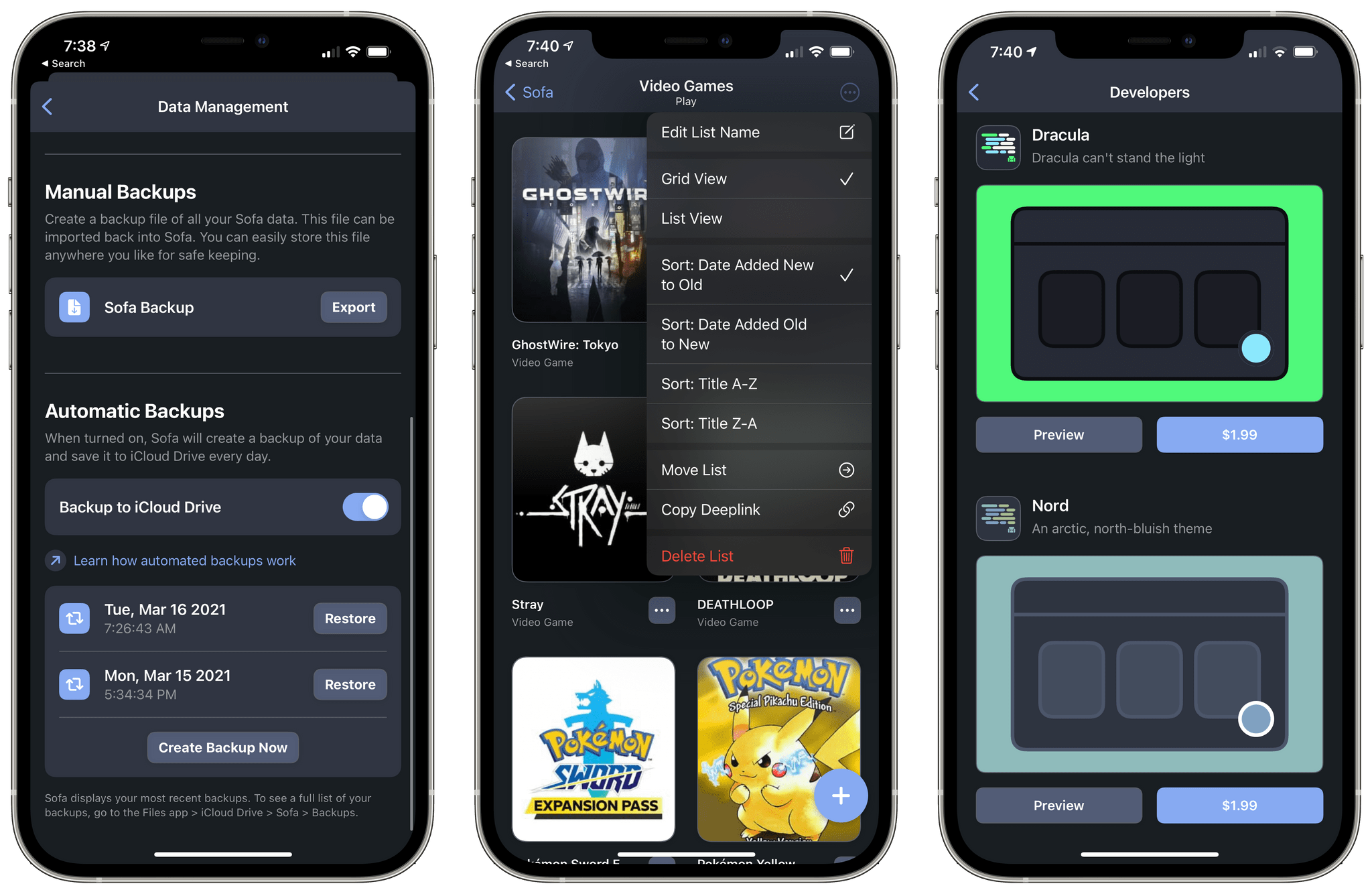 For users who want to extend Sofa’s functionality to other apps, lists and individual items can now be deep linked. Deeplinks can be copied using the three-dot menu button next to lists and items or from contextual menus that appear when you long-press on either. Paste the link in another app, and tapping it will open Sofa to the linked list or item. One place this sort of feature could be handy is if you keep a note with links to reviews of media you’ve saved and want a way to easily jump to details about that item in Sofa.

The app includes eleven new themes that are divided between the new Designer and Developer categories, too, bringing the total number of themes to more than 70. Sofa themes, which can be previewed from the Themes button in the top section of the app’s main view, can be purchased individually.

One of the things I’d love to see added to Sofa in the future is an action extension to make it easier to get items into its database. With eight categories of tracked media, that’s a feature that I’m sure isn’t easy to implement, but I’d love to be able to add items directly from Apple’s stores, for example.

I’d also like to see support for manual list sorting and a Mac version of the app added, as well as deeper Shortcuts integration. Sofa has basic Shortcuts actions for adding items, but actions with parameters that let me add items to particular lists and retrieve category, list, and item data would make much more powerful shortcuts possible.

I’ve been using Sofa primarily for tracking movies, books, podcasts, and music. I use other apps for TV shows and videogames, but I’ve stuck with Sofa for everything else because I love the app’s design and uniform, streamlined approach. Fortunately, the latest update expands the utility of Sofa without compromising its design roots, which should make the app more appealing to new and existing users alike.

Sofa is available as a free download from the App Store with In-App Purchases for its optional themes.