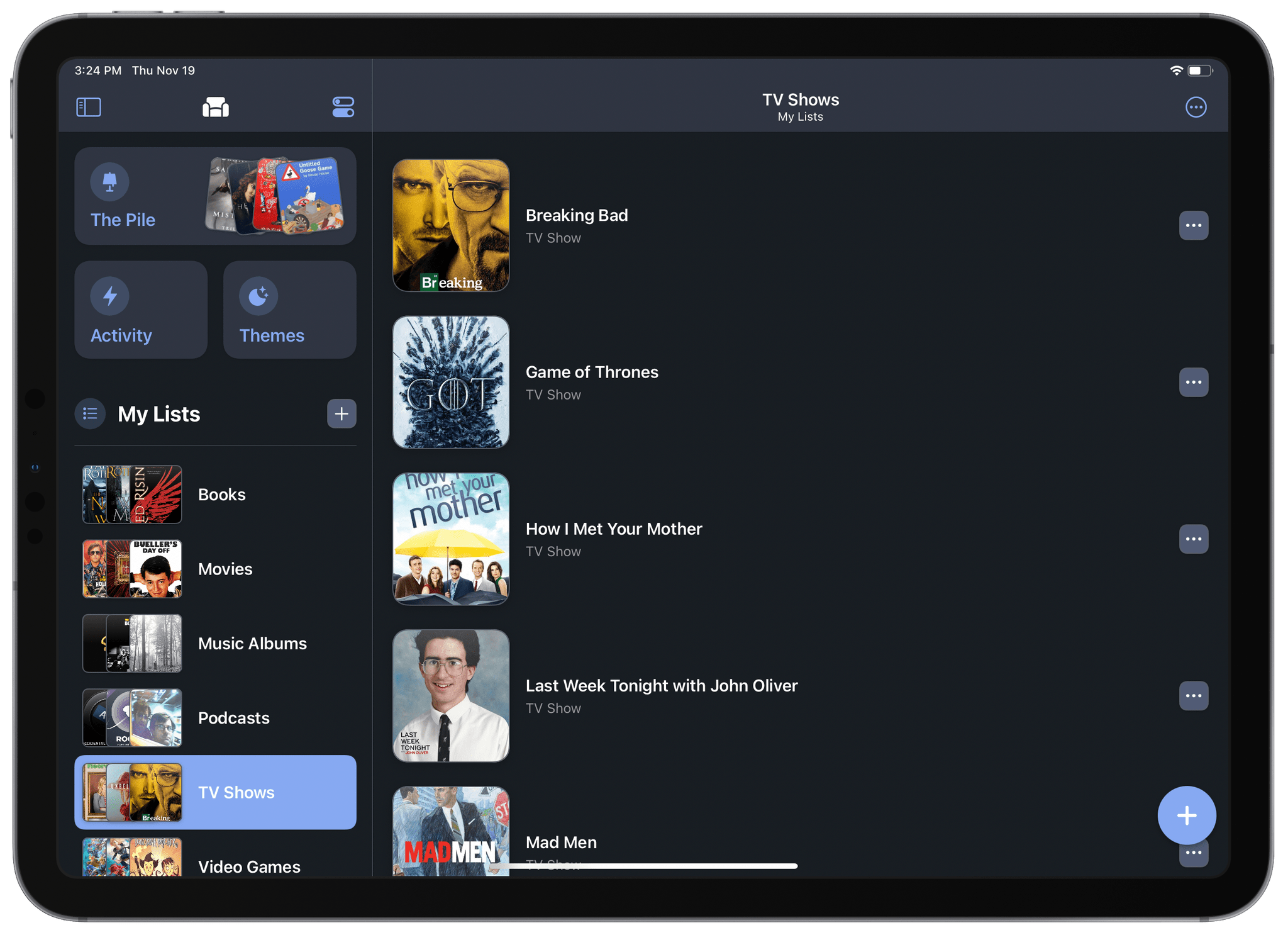 Sofa is an organization app for media which we last covered earlier this year. It provides a nice interface in which you can store TV shows, movies, books, podcasts, music, and videogames. I’ve been using it mostly to organize media that I’ve already seen, for record-keeping purposes. Another option is certainly to store media that you’re planning on consuming at some point in the future.

This week marked the release of Sofa 2.12, a huge update for iOS 14 which includes a refreshed design, widgets, new themes, an “Activity” list, and a brand new element which has been dubbed “The Pile.” 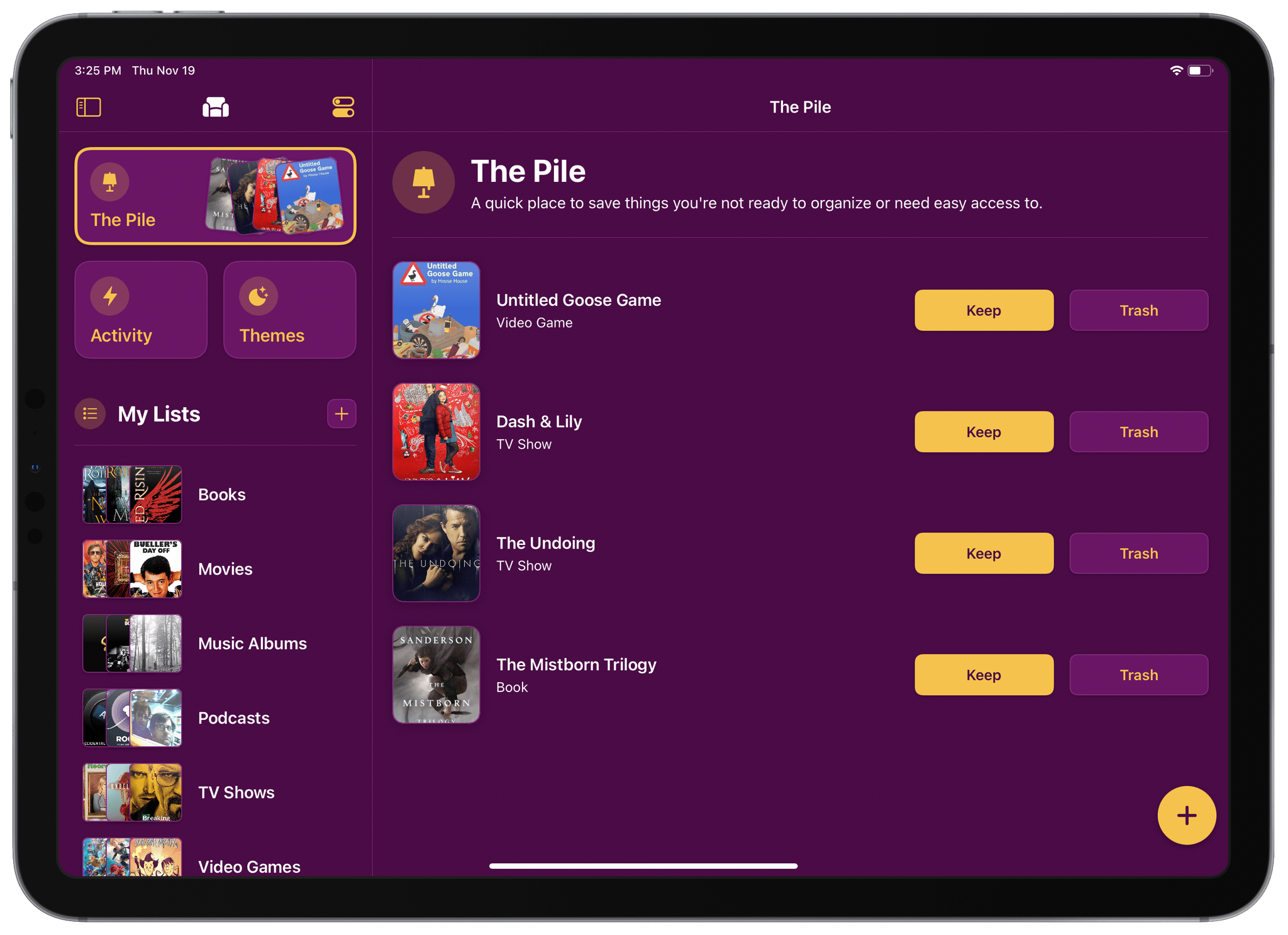 The Pile is a special list in Sofa which exists as a dumping ground for items that you plan on organizing later. Each item in the list has two large buttons: ‘Keep’ and ‘Trash.’ Tapping on ‘Keep’ opens a dialog in which you can choose one of your lists to send the item to, while tapping ‘Trash’ of course deletes the item.

I think The Pile is a great addition to the app for any users who have a lot of lists. It’s quicker to drop an item in The Pile when you think of it than to sort through all of your lists right then and there. That said, if you only keep a small number of lists then The Pile might not be particularly beneficial to you. Adding an item to The Pile still requires you to pick its type (book, TV show, album, etc.), search for and find its record, then add it. The only step that The Pile is cutting out is the one where you choose a list to place the item into.

For me, I’m currently just using the default list set, which includes one list for each supported media type. It’s very quick for me to pick a list for a new item, and then I don’t have to go back and sort through The Pile later. With that said, if I started adding more lists — and thus the logic for where to keep each item became more complex — I think The Pile would be an excellent solution to keep Sofa fun and engaging rather than it starting to feel like a chore. 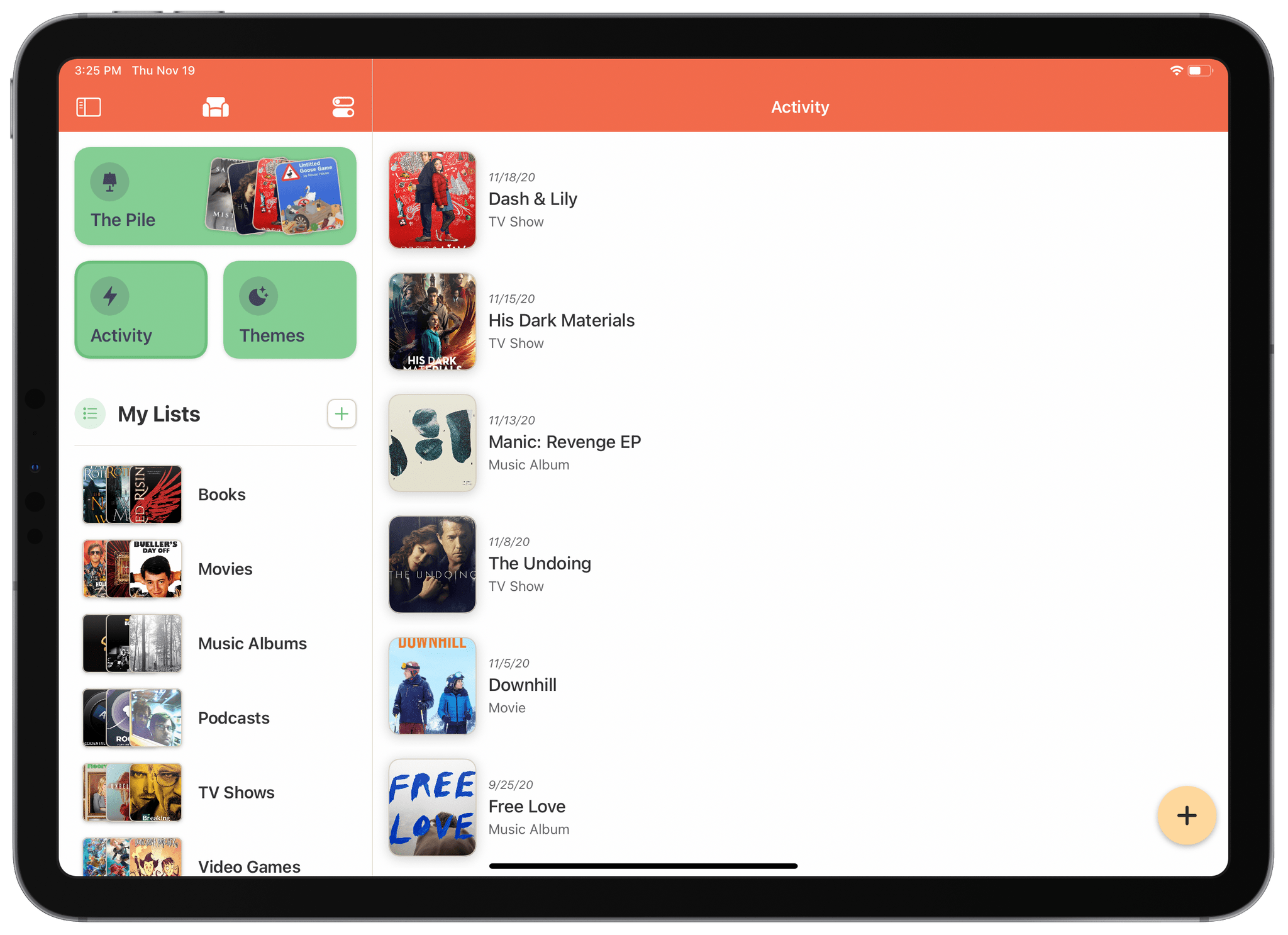 Another new section in Sofa is called “Activity”. This is designed to be a history of the media that you’ve consumed over time. As you watch new shows, read new books, play new videogames, etc., you add them to Activity. Then later on you can scroll back through your list and remember what you’ve consumed or played.

Each item in Activity includes the date it was added by default. You can tap and hold on an item to change its date, which will then re-sort it in the list based on the new date you set. I really like the simplicity of Activity, although I wish I could add some more metadata to my entries — such as a rating or even just a simple notes field (this is something I’d love to see throughout the entire app). 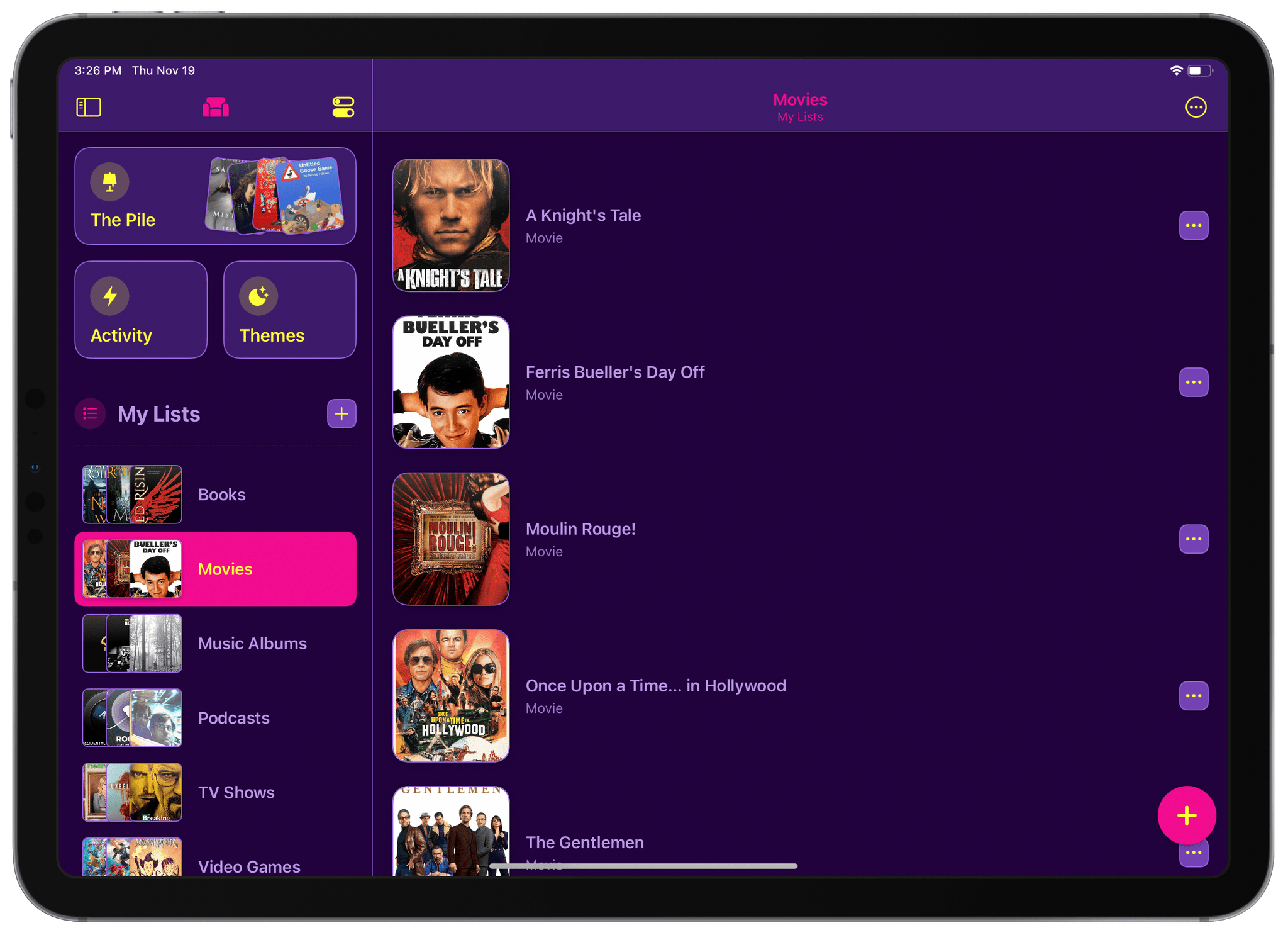 Sofa’s new design is gorgeous. Corners throughout the app have been rounded off and space has been added between many elements. To my eye, it’s just the right amount of space: enough that things don’t feel cramped whatsoever, but not so much that my screen real estate is being wasted.

The home view now includes three rounded-rectangle buttons above your lists: ‘The Pile’, ‘Activity’, and ‘Themes’. We’ve covered the first two and I think they deserve this position of honor, but the ‘Themes’ button feels out of place here. While I love the fact that Sofa offers a wide variety of themes, once I pick a theme in any app I generally stay with it for a very long time, if not forever. I think the right place for theme options is within a preferences pane somewhere, not at the top level of an app’s main interface. That said, the ‘Themes’ button is right alongside the ‘Activity’ one, and together they take up the same amount of space as ‘The Pile’ does, so it’s not too big of a deal. In the future it would be a great spot to swap in some other type of special list. 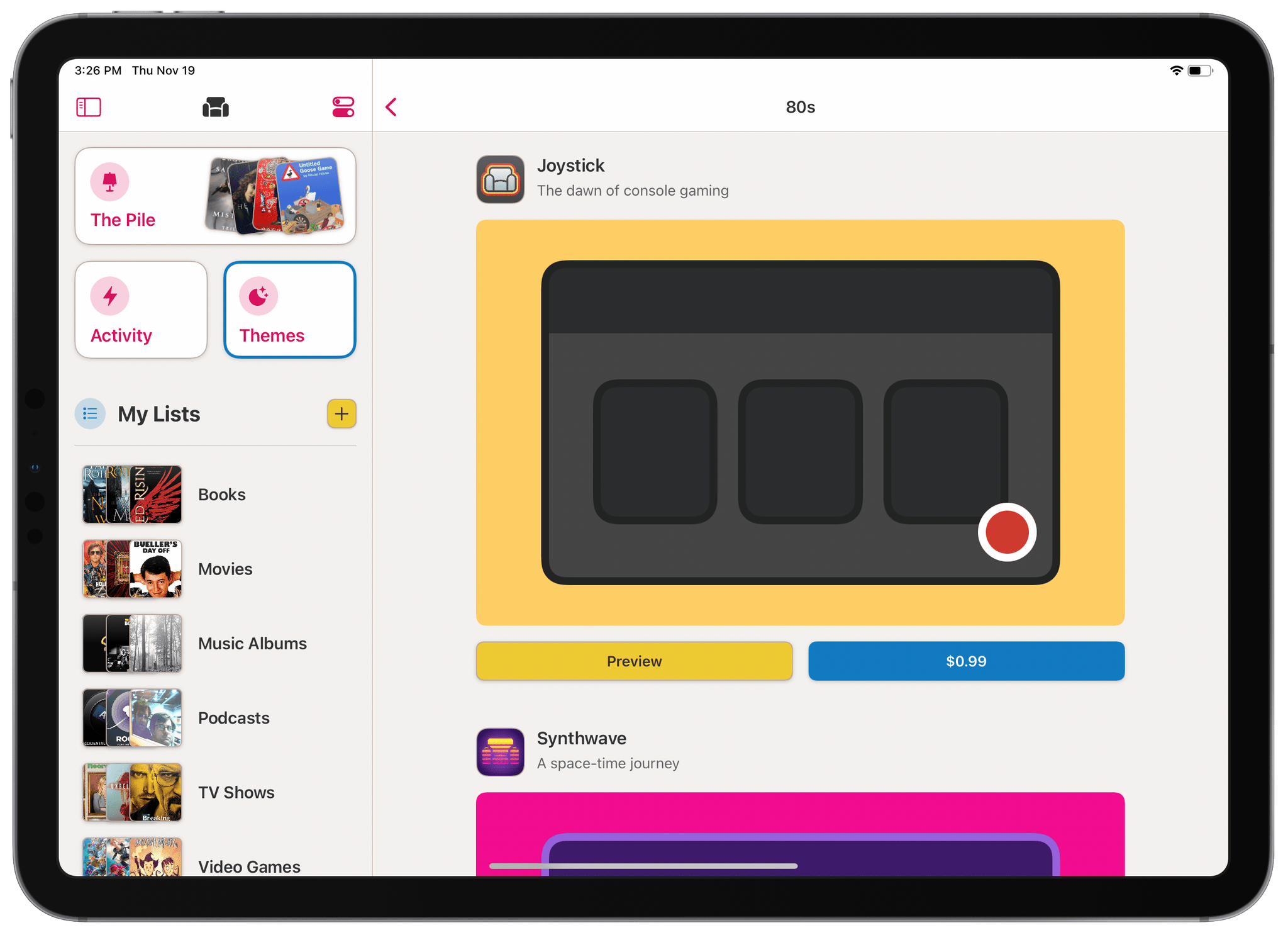 Speaking of themes, Sofa 2.12 has added seventeen new themes, including twelve new accent colors for black and white, as well as five new themes for fall. Themes in Sofa are paid at $0.99 each. This is the entirety of the app’s monetization strategy so it certainly makes sense to charge for them. Sofa includes a nice preview feature where you can pick any theme available and use it throughout the app for 30 seconds. That doesn’t sound like a lot of time, but I think it’s plenty to determine whether or not you enjoy a theme in the app.

Including the new themes, Sofa has over 50 options available. If you enjoy the app then buying a theme is a great way to support the developer. Many of the color schemes are super unique, and I love the way they change the overall feel of the app. 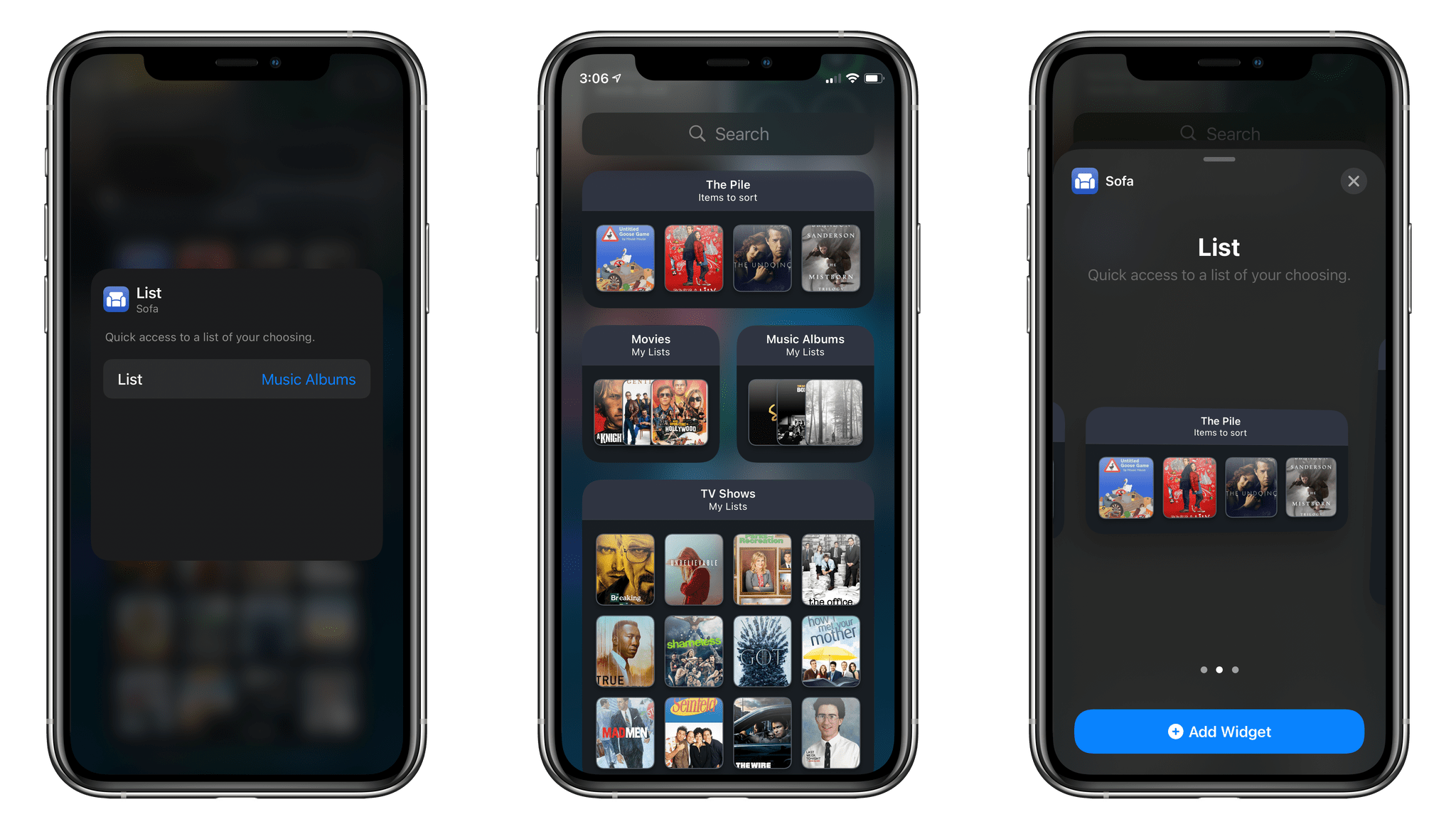 This week’s Sofa update brings support for iOS 14 widgets for the first time. There is only one type of widget available, called ‘List.’ It allows you to choose a single list from Sofa and display its contents within the widget. Tapping on an item in the widget will open that specific item in Sofa, while tapping on the widget’s title bar or any blank space will open the list itself. It’s essentially a quick-access widget for a list, and you can add more than one widget to gain access to multiple lists. The widget is available in three different sizes, the bigger of which just show more items from the list.

The list widget is a nice start, but in the future I’d like to see an option to display multiple lists in the same widget so that I can get access to more without taking up so much space.

Despite its unassuming version numbering, Sofa 2.12 is a pretty huge update to a really nice app. The new design is my personal favorite part, but I also am already enjoying having a spot to record my media activity. Once I build that list up I know it’ll be nice to look back and see what I watched, and when I watched it.

I think The Pile is going to be great for many Sofa users as well. It’s a nice way to handle an increasing number of lists for various purposes without letting the input of items get out of hand. Rounding things out with more themes and new widgets makes for an excellent iOS 14 update.

You can try out Sofa yourself free on the App Store. In-app purchases are available for each of the themes.