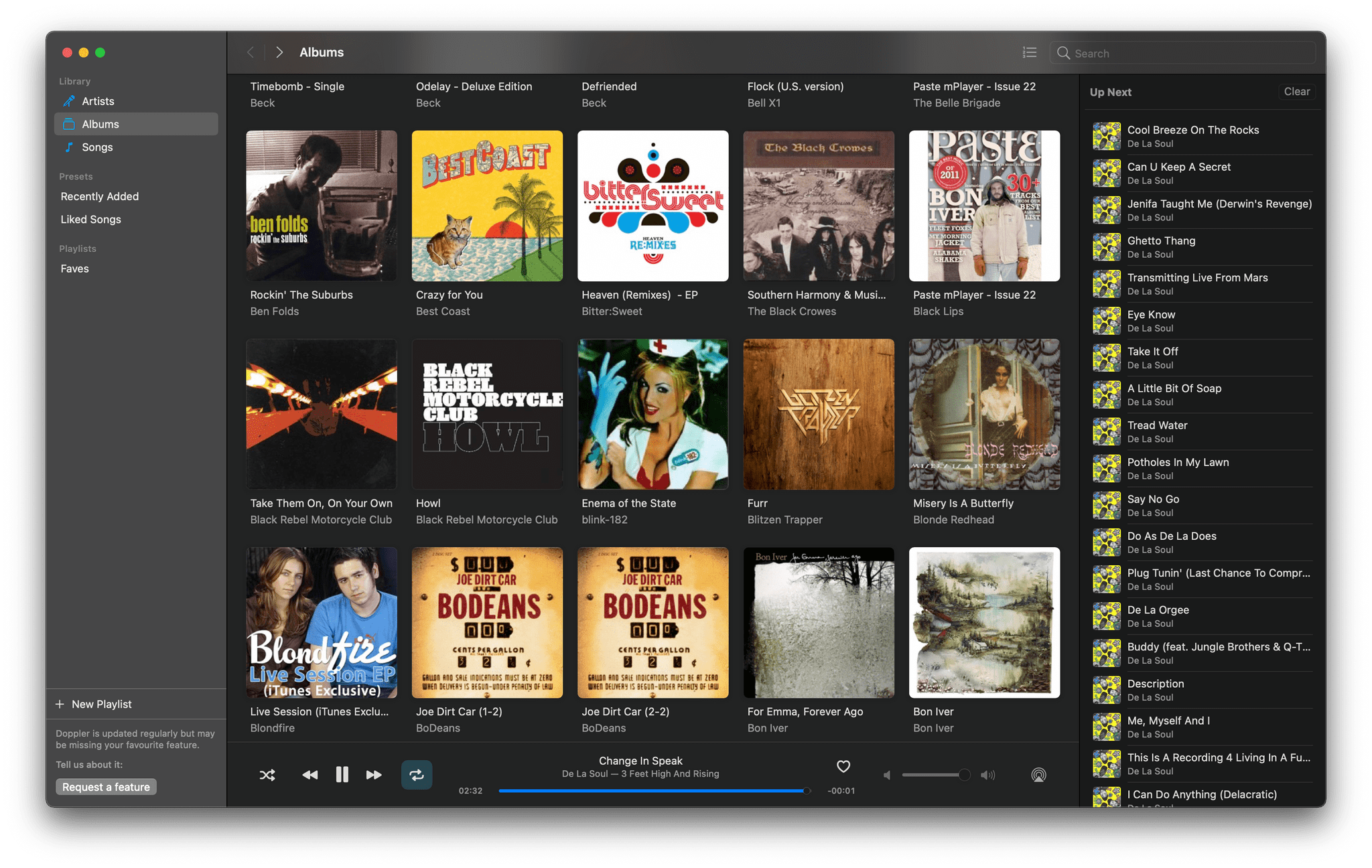 I haven’t purchased much music in the past six years or so, but there was a time when it was a big part of my entertainment spending. I still have a huge collection of albums ripped from CDs I bought and later purchased online from the iTunes Store. That changed with the advent of streaming services like Spotify, Rdio, Beats Music, and later Apple Music. I still have those files frozen in time on the 2015 Mac mini I use as a Plex server. So, when Ed Wellbrook told me he was bringing Doppler, his excellent iPhone music player to the Mac, I figured it was time to dust of my old music collection and give it a try.

Doppler, which we’ve covered before here and in MacStories Weekly, including, most recently, Issues 252, 261, and 275, is a music player for people who buy their music. Apple’s Music app continues to maintain backward compatibility for users who own their music libraries, but Apple’s focus these days is squarely on streaming, not purchasing. That’s left apps like Doppler to fill the void offering features like the ability to add new music to your library from an iPhone, something that isn’t possible with Apple Music.

The minute you try Doppler, you can tell it’s made by someone who cares deeply about music and the experience of listening to it. The interface puts albums and artists front and center, focusing on album art and simple, intuitive controls to make listening to music on-the-go a pleasure.

Wellbrook has brought the same sensibility to a native Mac version of the app, which was released today. Doppler for Mac is a lot like what I’d imagine Apple’s Music app would be like if Music were split into separate apps for streaming and owned music. That’s not likely to ever happen, but fortunately, Doppler has you covered if you own your music. 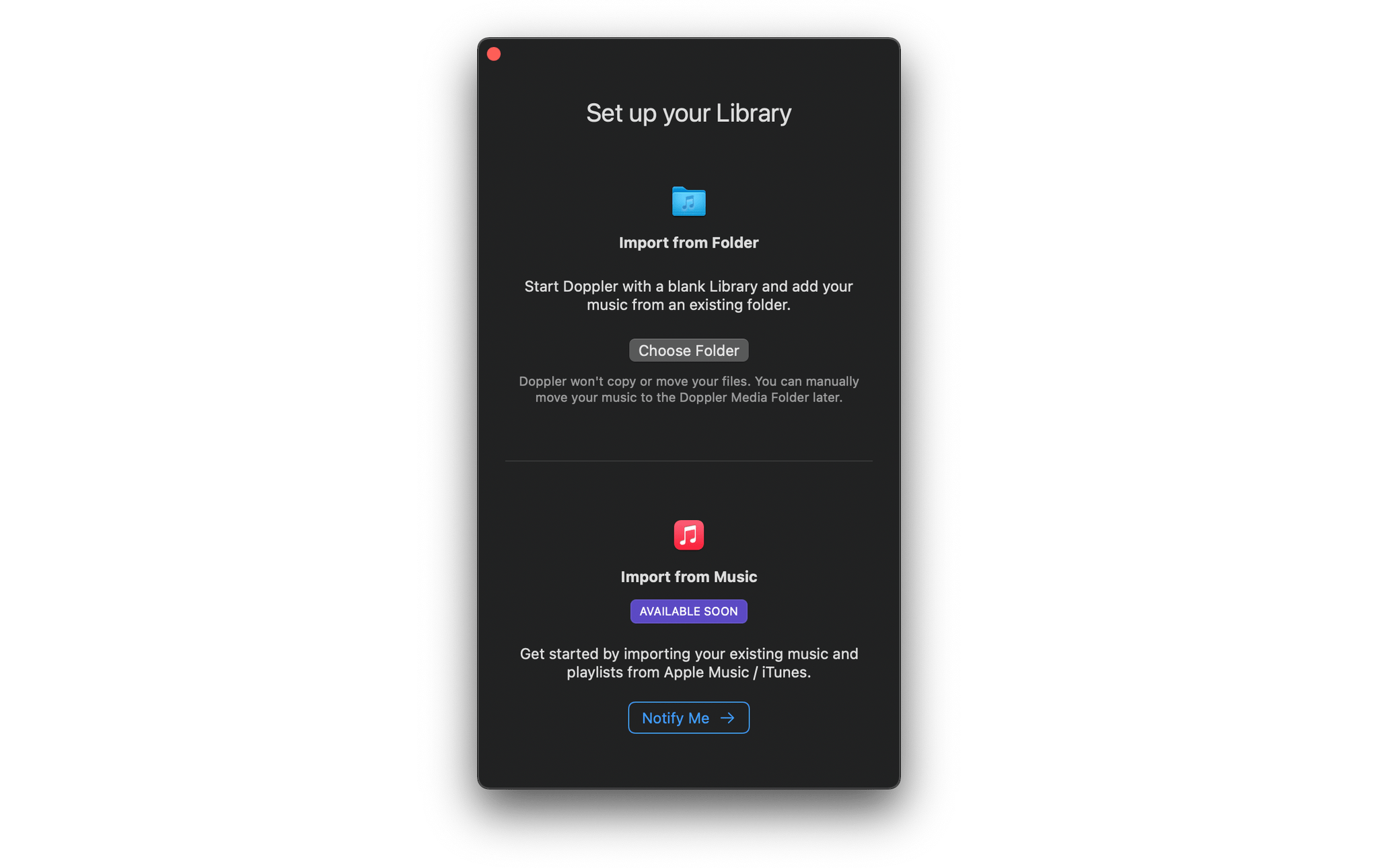 Doppler gives you complete control of what goes into its library.

The first thing you need to do when you launch Doppler for the first time is to add some music to it. Fortunately, the app makes this simple. The easiest route is to drag files from your Mac’s drive into Doppler to start populating the app with your collection. However, there’s also an Import option in the File menu for adding albums by navigating the file system.

I thought I’d try something a little different to see if Doppler could handle it. I launched the app on the M1 iMac I’ve been testing and then navigated to the 2015 Mac mini, where my old purchased music collection is sitting in a different part of my house but connected over an Ethernet connection. I picked Import from the File menu and found my way over my network to the mini, and chose my Music folder full of thousands of previously purchased tracks.

I really didn’t expect Doppler to be able to handle thousands of files over the network, even over a fast connection, but it handled the task like a champ, copying tracks across the network onto the iMac’s SSD. As an aside, this was the first time the M1 iMac has gotten warm to the touch, and the fans spun up audibly. The Mac was working hard but completed the task with no issues. Doppler can’t import tracks from your Apple Music library yet, but Wellbrook says that functionality is coming soon. 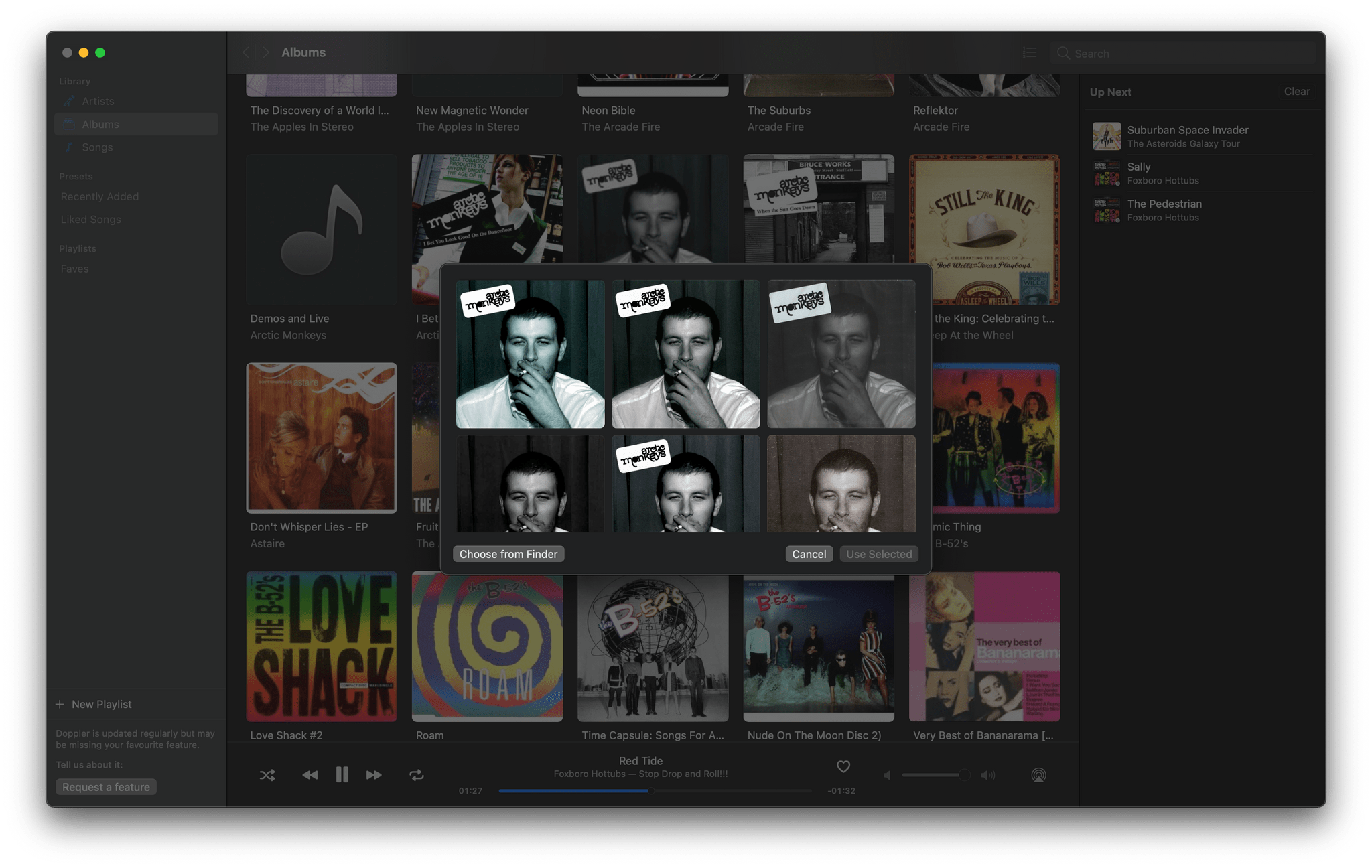 Doppler’s Search for Artwork feature makes it easy to fill in any missing album art.

There was some missing album art here and there, but in my testing, it was easy to find artwork by right-clicking on an album and picking from the results returned by Doppler’s Search for Artwork feature. There were a few cases where search didn’t pull up results, which was usually the case for tracks with bad metadata, but you’ve also got the choice of adding art from the file system, so one way or another, you can ensure every track has the artwork you want.

Playback is reminiscent of a simplified version of Apple Music. The left sidebar controls navigation with categories that are divided into sections. The first is your Library, which includes Artists, Albums, and Songs, Presets, which are auto-generated playlists of Recently Added and Liked Songs, and Playlists, which are collections you’ve created yourself. Also, Doppler supports MP3, FLAC, WAV, AAC, and other formats, eliminating the guesswork about whether parts of your music collection will work with the app. 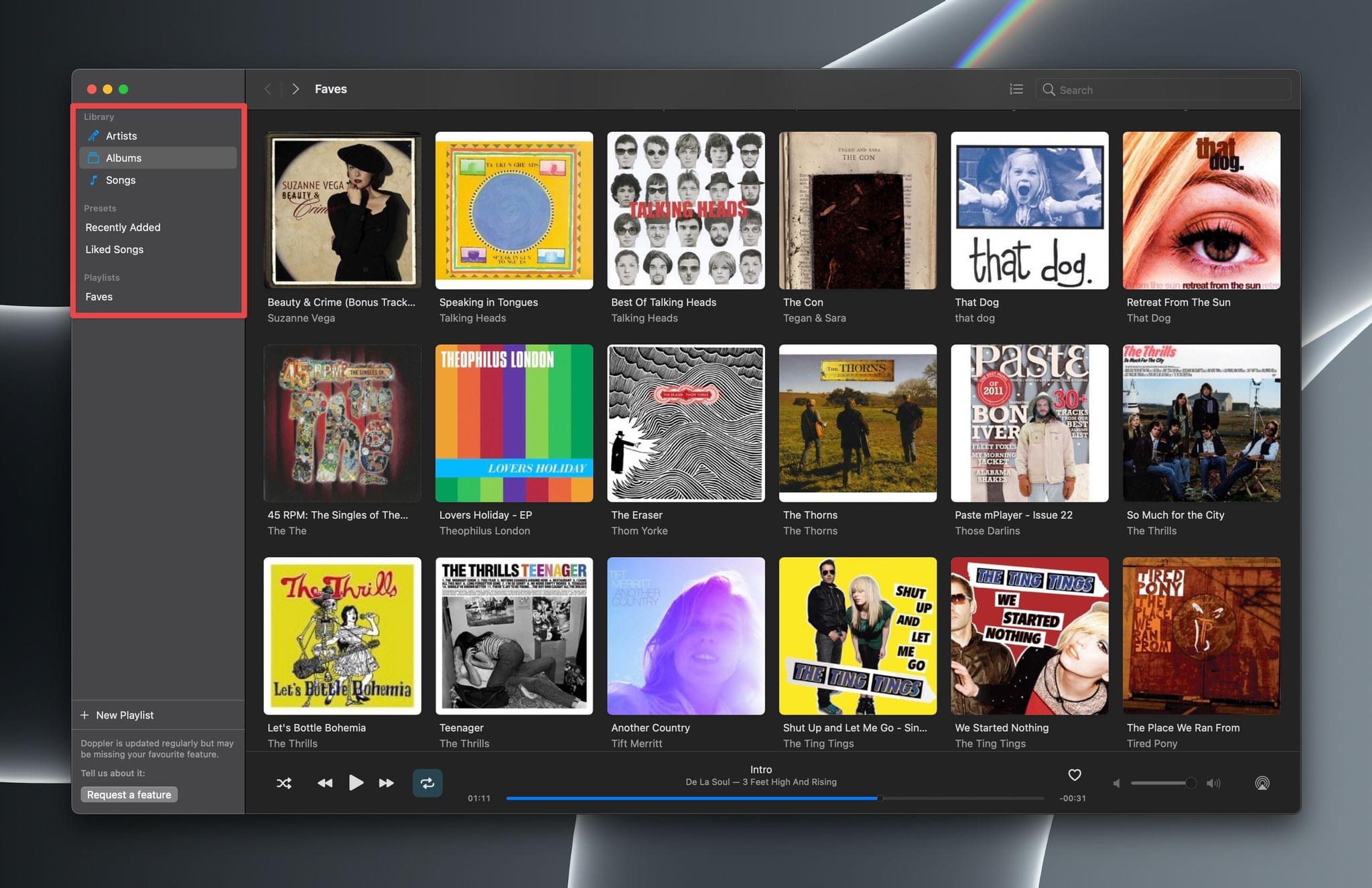 Doppler’s sidebar is divided between your Library, Presets, and Playlists.

The lion’s share of the window is dominated by whatever you’ve selected in the sidebar. Artists are arranged in a vertical list, and selecting one displays the available albums in your collection. The Albums view shows a grid of album art, and Songs is a simple spreadsheet-style list organized into columns of metadata for each song. 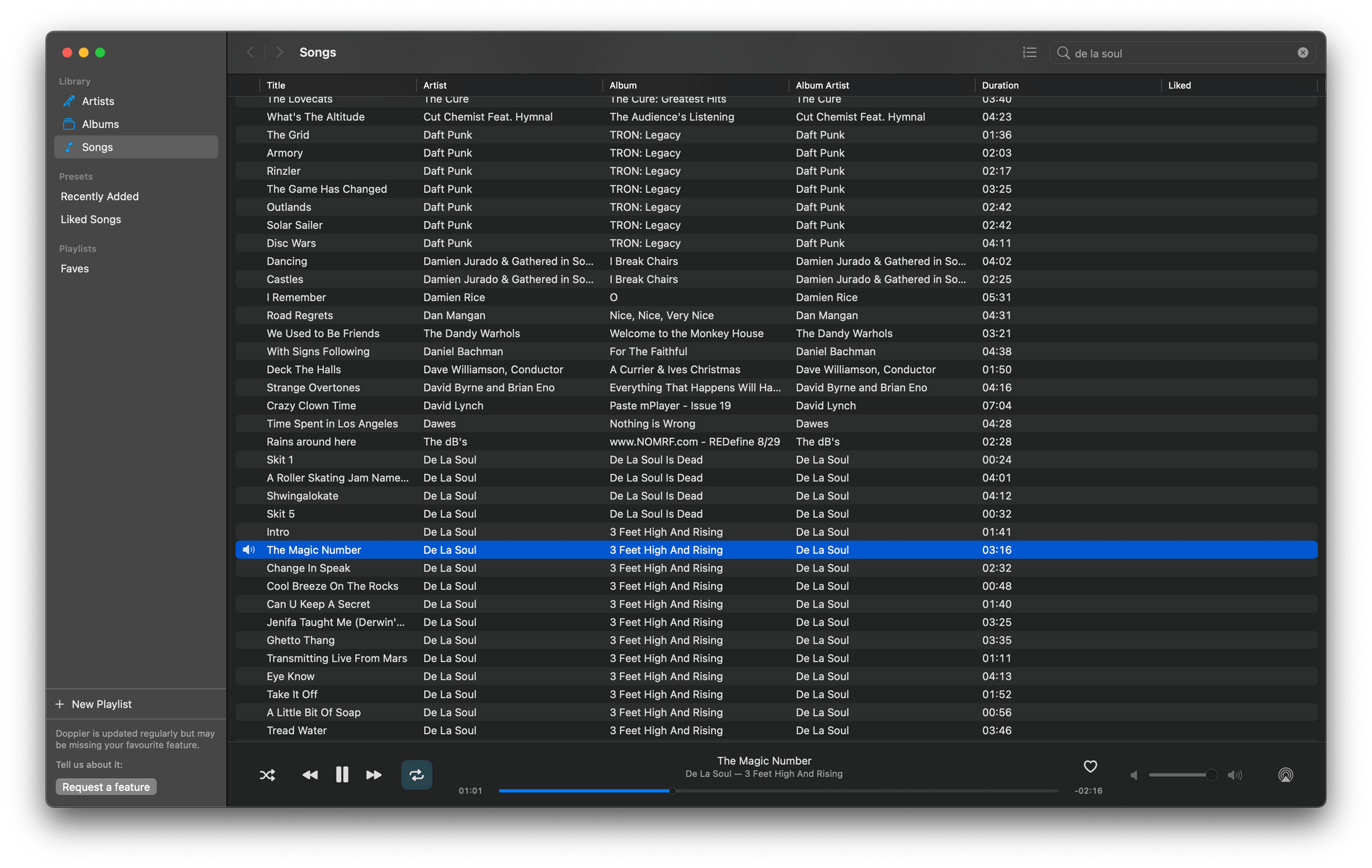 Doppler also includes a panel on the right side of the window that lists upcoming tracks and can be hidden using a button in the app’s toolbar next to a dedicated search field. Playback controls are docked to the bottom of the window and include what you’d expect, plus a dedicated icon for ‘liking’ tracks and an AirPlay button. 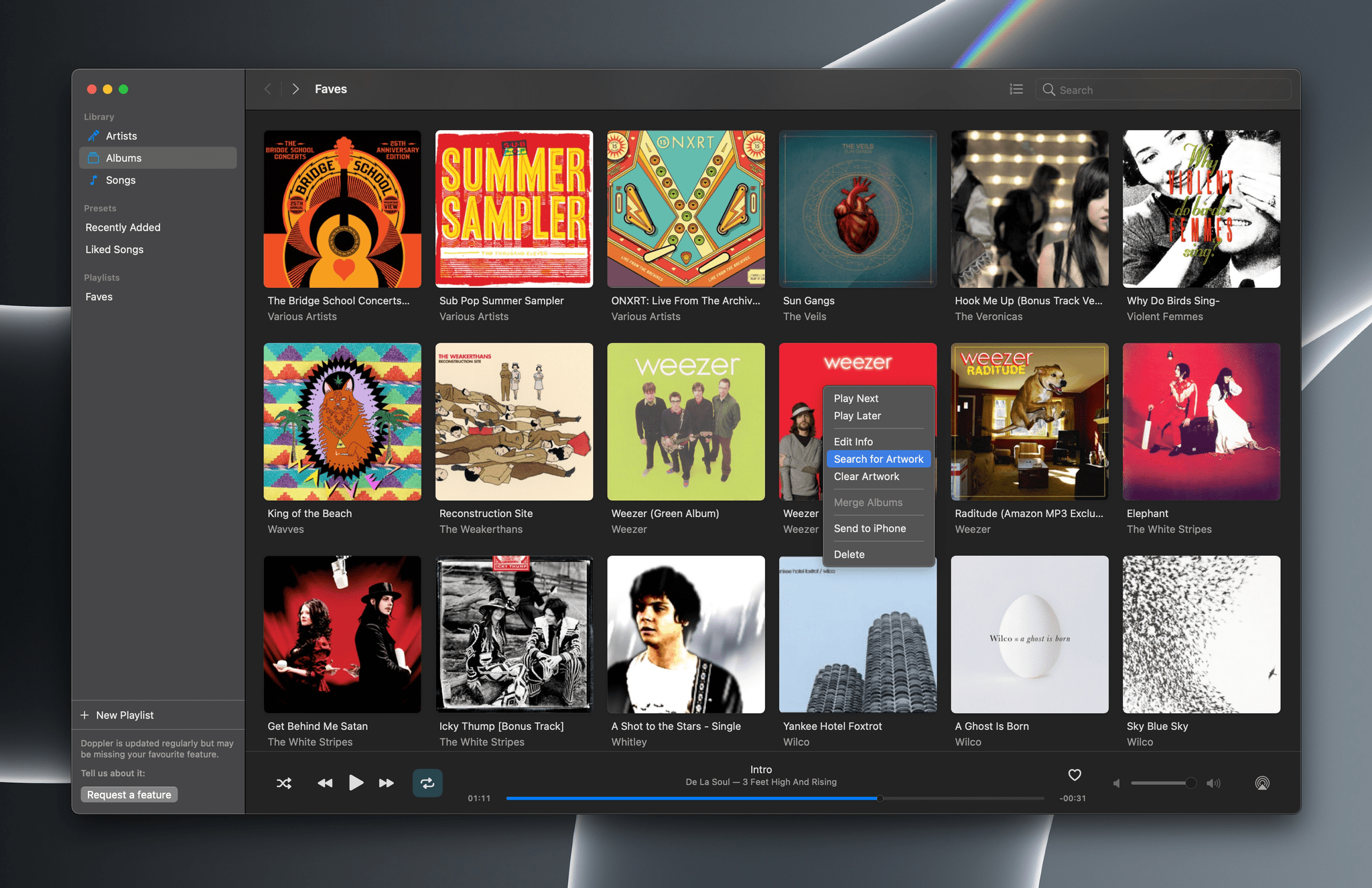 A touch that I like a lot is that common actions are available in a right-click menu throughout the app. For example, right-clicking an album offers the following options: 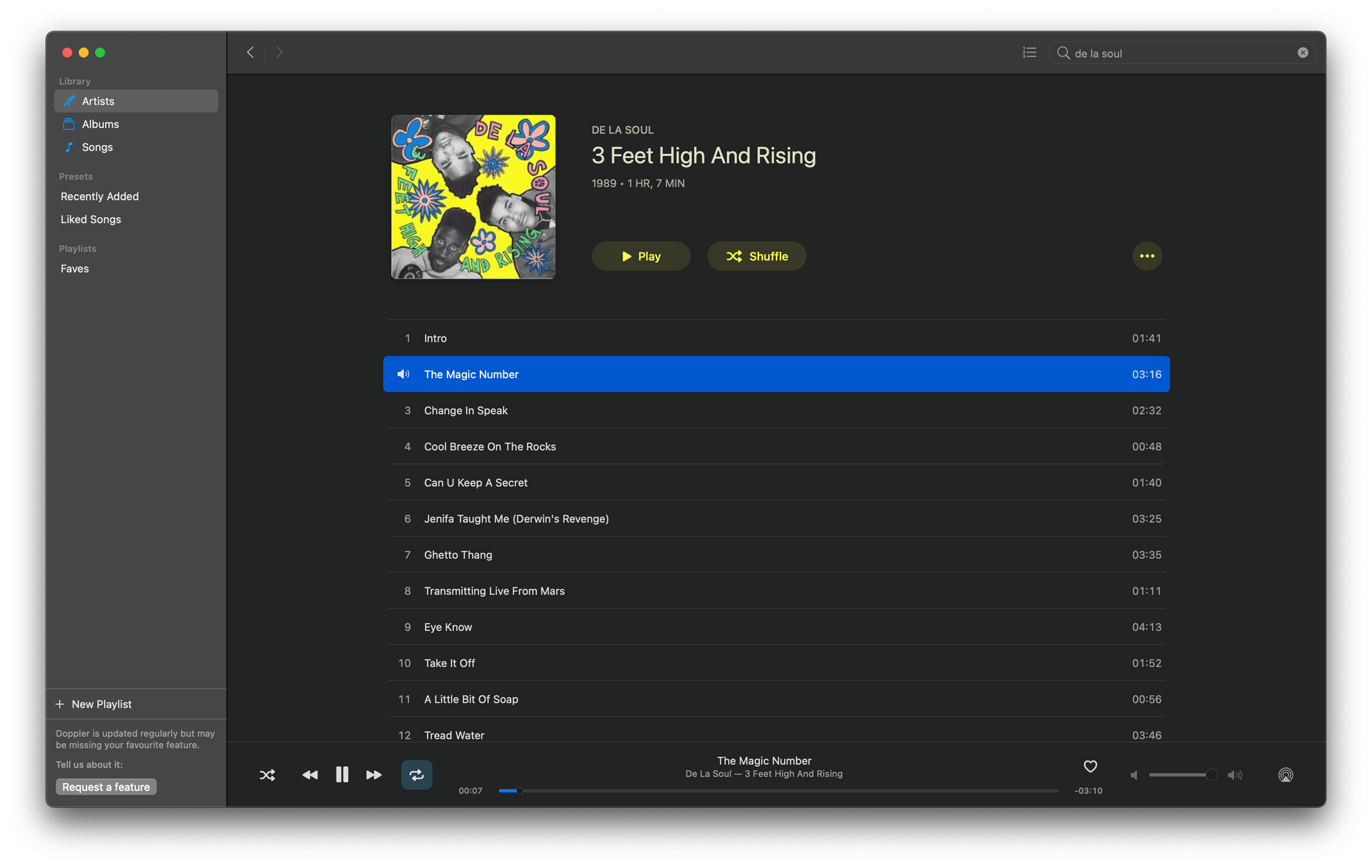 Viewing a single album in Doppler.

The option above for sending music to the iPhone version of Doppler is interesting. Doppler Transfer is a separate Mac helper app that establishes a connection with an iPhone running the iOS version of the app over USB or WiFi. In my testing, transfers were fast and reliable, making it easy to use Doppler for Mac as a home base for your music and an iPhone as a companion device with a subset of a larger collection.

Finally, Doppler includes a Last.fm integration and will work with Sleeve, a Mac utility for controlling playback that sits on your desktop, that I covered in Issue 273 of MacStories Weekly.

Purchasing music is less common today than it was even a few years ago, but there are a lot of good reasons to do so. It’s a good way to support your favorite artists and find new music that isn’t available on streaming services, to name just a couple. Drawing from a collection you own instead of the vast libraries on streaming services makes it easier to find something you know you’ll enjoy too. It’s not how I listen to music now, but spending time with Doppler, I understand the appeal of controlling your library.

Doppler’s appeal runs deeper, though. There are plenty of music players you can point at a folder of files. What sets Doppler apart is its attention to delivering a top-notch listening experience in a reliable, great-looking package. I’d love to see Doppler adapted to the iPad too, and hopefully, syncing with Apple Music’s library will be out soon, but if you’re a music fan looking for a great playback experience for the music you own, Doppler is a must-try app.

Doppler is available for a one-time payment of $25 and offers a 7-day free trial.