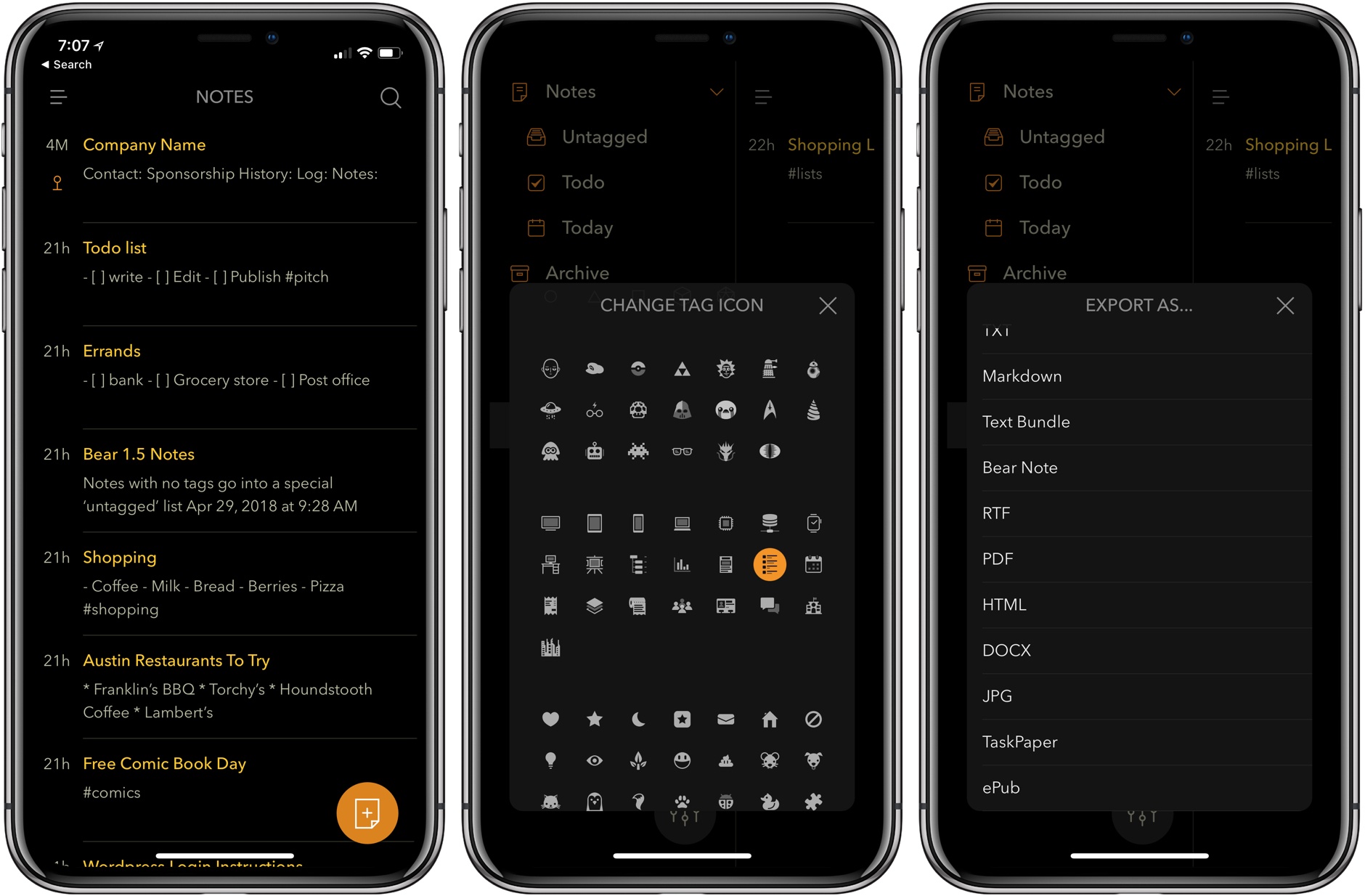 Bear debuted in 2016. That’s given users plenty of time to accumulate large collections of notes, which has made managing them more difficult. With Bear 1.5, Shiny Frog takes note management head-on with an update that significantly improves the way users interact with their note libraries.

One of the most popular recent additions to Bear is TagCons, icons that the app automatically associates with certain commonly-used tags in the sidebar. For example, a ‘videogames’ tag gets a Space Invaders icon, and notes tagged with ‘reading’ have a book icon.

When there isn’t an icon pre-assigned to a tag, Bear assigns a simple hashtag icon. Now though, you can switch out the hashtag and any other icon for one of 169 different icons, 80 of which are new, by long-pressing on any tag in the sidebar. It’s a simple customization feature, but in my experience, it makes finding the tag you want easier than simply scanning the app’s list of tags. Shiny Frog says additional icons are planned in the future. 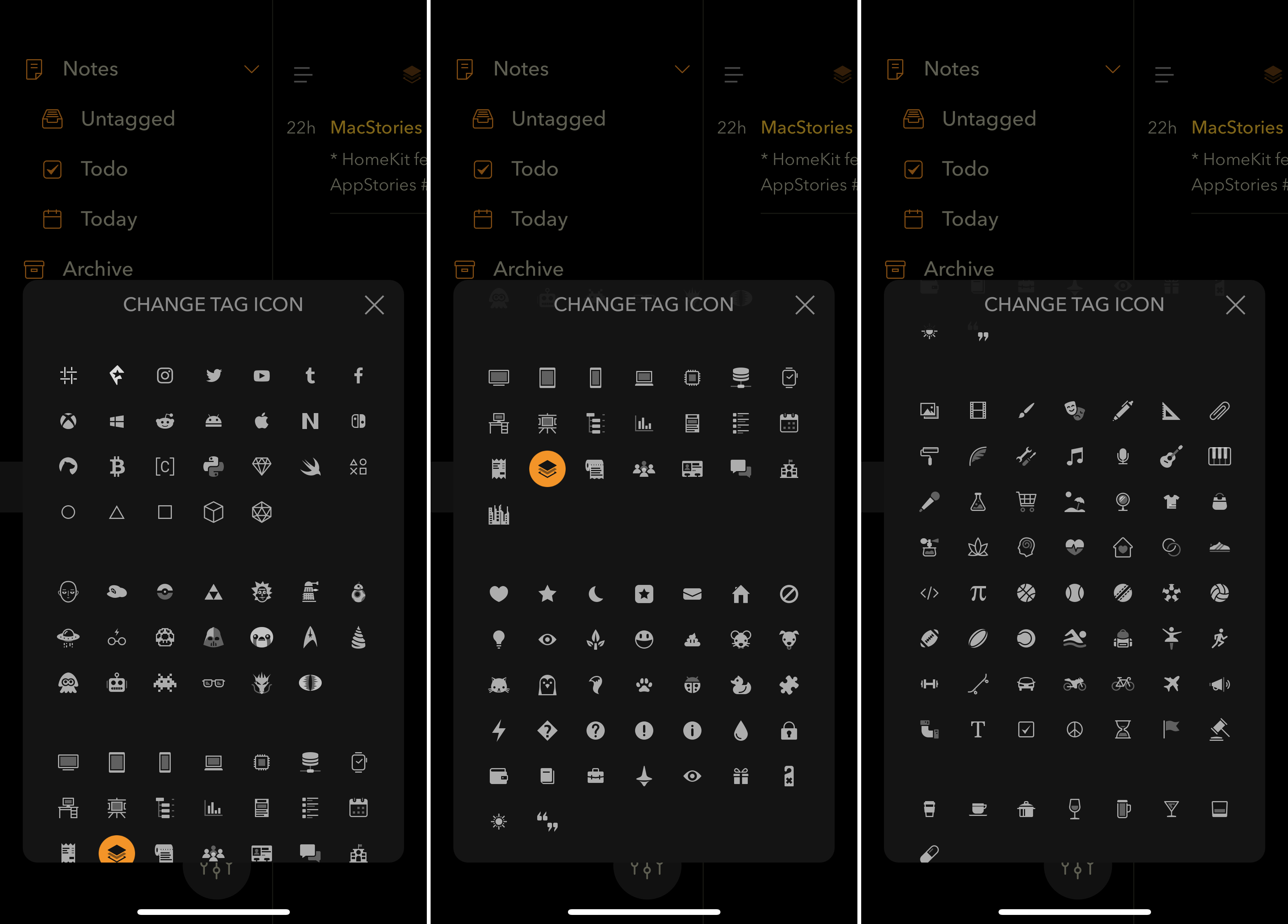 The same long press on a tag that lets you change its icon includes an option to export all notes associated with that tag, which is a much more efficient way to export multiple notes. Bear 1.5 also adds the option to export notes as ePub files.

Today’s update addresses the problem of old notes and refines the app’s search functionality too. First, notes can now be archived. It’s a handy way to declutter your notes library while maintaining easy access to notes you don’t use frequently. Archived notes are moved to a separate Archive sidebar list that appears the first time you archive a note.

Second, Bear includes new sub-lists of certain note types that are nested under the full notes list in the sidebar. Tap the disclosure chevron to the right of ‘Notes’ and Bear will reveal subcategories for Untagged notes, ToDo notes, which are notes that have checkboxes in them, and Today notes, which include any notes edited today. Those categories were previously accessible with the special searches ‘@untagged,’ ‘@todo,’ and ‘@today,’ but giving those categories dedicated space in the sidebar makes them easier to access.

There’s a new gesture to search your notes list in Bear 1.5 too. Swiping down on the notes list opens the search screen with the cursor active in the search field, ready for typing. It’s a nice shortcut especially on the iPhone where it eliminates the need to reach to the device’s top right-hand corner. The same gesture can also be used to dismiss Bear’s preferences screen and popover views. 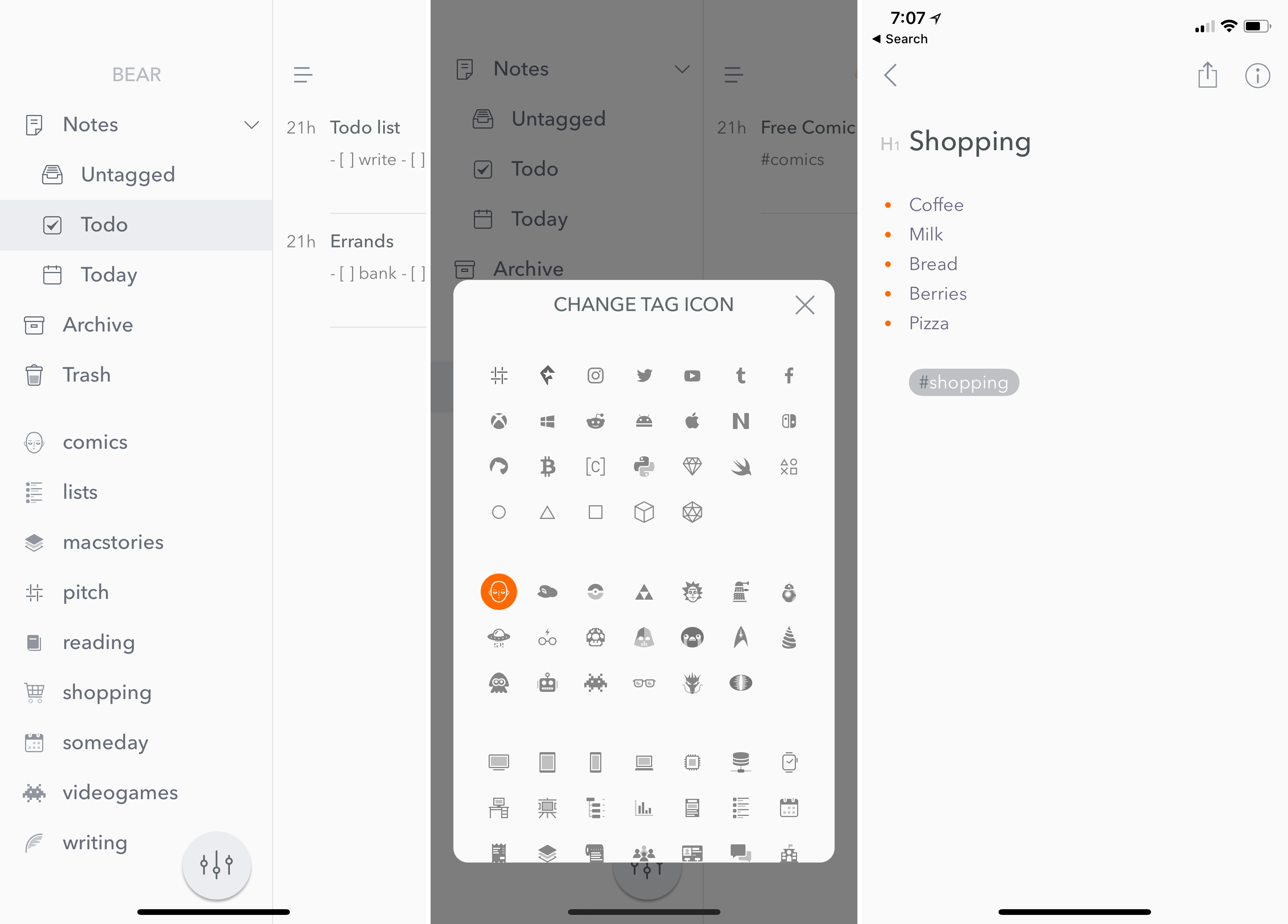 Bear’s update includes a few other cosmetic changes to the iOS version and a couple of notable Mac-specific revisions to the app. iOS devices gained a new theme called Ayu, and the true-black Dieci theme that debuted on the iPhone has been added to the Mac. Any note in the Mac version of Bear can be forced to float above all other windows on your screen, which is useful for reference materials needed while working in another app. Bear also adds syntax highlighting for AppleScript, YAML, and Clojure.

Bear 1.5 makes the best use yet of its sidebar with new features that facilitate finding, accessing, and processing your notes. Users with large libraries of notes will appreciate the added flexibility as will anyone else who values customizing their apps to suit their work habits.

Bear 1.5 is available as a free update on the App Store.