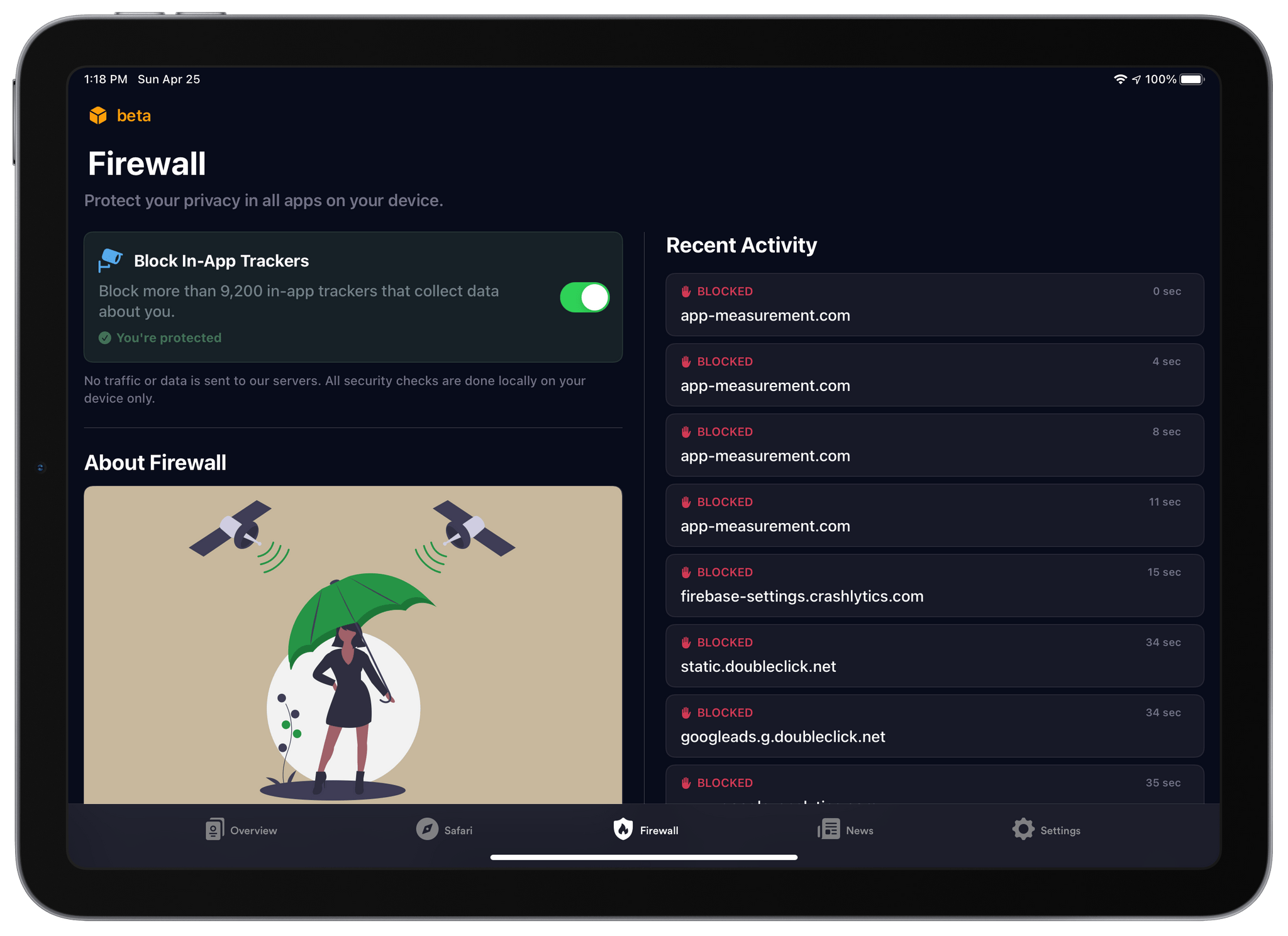 I’ve used 1Blocker to block ads from cluttered websites for years. No ad blocker is perfect. Some ads still get through, and blockers can sometimes interfere with the functionality of a website, but of all the ones I’ve tried, 1Blocker strikes the best balance. The app is also available on all of Apple’s platforms, making it easy to block intrusive ads but allow them on sites where they don’t wreck the reading experience.

1Blocker, which I have covered many times in the past on MacStories, was the first iOS app I know that bundled multiple sets of content blocking rules to offer more filters than the iOS would otherwise allow. The system also allows 1Blocker to filter more than just advertising, such as social media widgets, comments, and adult sites.

Today, 1Blocker has expanded its coverage even further with a feature called Firewall. If you’ve read Federico’s in-depth story about iOS and iPadOS 14.5, you’re familiar with App Tracking Transparency. That’s the OS feature that requires apps to request permission before tracking your activity across multiple apps and websites. Firewall takes that a step further by automatically blocking trackers and doing so even if the trackers are what are known as first-party trackers because they don’t correlate your data with data collected by other companies. It’s an extra layer of protection between you and data brokers. 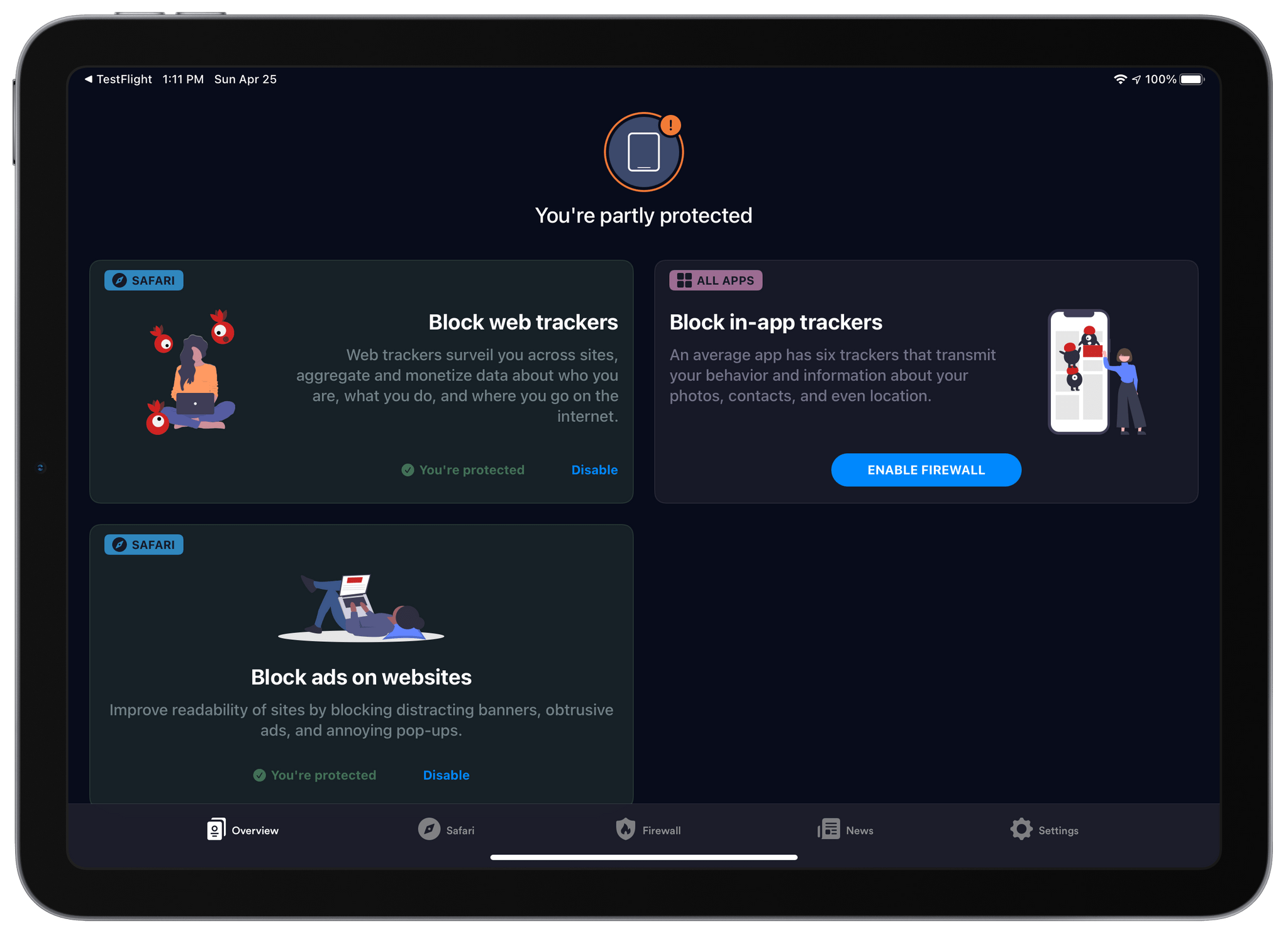 I’ve been using Firewall for a few weeks now, and it works seamlessly in the background. I haven’t noticed any slowdown of my devices or issues with apps or websites that it might have caused. In fact, the only thing I’ve noticed is that it blocks Apple News ads. Firewall isn’t targeted specifically at ads, but by blocking whatever tracker Apple News is using for its ad network, the feature also blocks the ads, which is nice because the ads in News are repetitive.

1Blocker does a nice job walking users through setting up Firewall, which requires a local VPN profile to run on your device. That allows the app to run a network extension that monitors the traffic between your device and the Internet, blocking any trackers that attempt to transmit data. All of this happens in the background, locally on your device.

1Blocker walks you through an easy setup process.

Once you walk through that process, use a few apps, and return to the 1Blocker Firewall tab, you’ll see a long list of trackers that have been blocked. Some I recognize as ad-related trackers, others are analytics packages added by developers to see how their apps are used and to collect crash data, and many I don’t recognize at all. According to 1Blocker, they can detect over 9,200 trackers using open-source filters.

The main limitation of 1Blocker’s new Firewall feature is that iOS only allows one VPN to run at a time. As a result, if you regularly use another VPN service to protect your Internet traffic, you won’t be able to do so and run 1Blocker’s Firewall at the same time. I have used a VPN when connecting to public WiFi networks in the past, but that has been rare during the pandemic, so for now, I’ve been happy to run Firewall continuously on my iOS devices, while I’m at home. Still, it’s worth keeping in mind if you are a heavy VPN user.

I like what 1Blocker has done with this update a lot. Managing the ads and other cruft that appear on websites has been its forte for a long time, but Firewall adds a new dimension to the app’s utility that is both simple to use and provides concrete benefits you can see in the long list of trackers it blocks as you use your devices.

1Blocker 4.0 is a Universal Purchase across all of Apple’s platforms that can be downloaded for free to try one Safari ad-blocking filter and the app’s Allow List. To unlock the remaining Safari filters and Firewall, 1Blocker offers a subscription with a two-week free trial for $2.99 per month or $14.99 per year. There is also a lifetime purchase option, and the app supports Family Sharing.