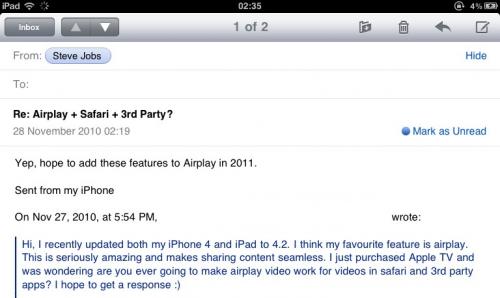 Finally, our questions have been answered by Steve Jobs himself. We love AirPlay, but we can’t stand the fact that the current version that ships with iOS 4.2 comes with many limitations, especially when it’s about video streaming to the Apple TV.

You can’t stream video through AirPlay from Safari or any 3rd party app. This lead me to think that the AirPlay we’re playing around with now is just a teaser of better things to come in the future.

Now, a Steve Jobs email posted by MacRumors confirms that Apple is planning to add the feature in 2011:

Hi, I recently updated both my iPhone 4 and iPad to 4.2. I think my favourite feature is airplay. This is seriously amazing and makes sharing content seamless. I just purchased Apple TV and was wondering are you ever going to make airplay video work for videos in safari and 3rd party apps? I hope to get a response.

A number of hacks and tweaks to enable AirPlay for video have surfaced recently, including packages jailbreak users can download from Cydia and install on their devices. We also detailed that it’s possible to turn any iOS device into an AirPlay speaker.

Here’s to hoping 2011 will bring the AirPlay we’ve always wanted.