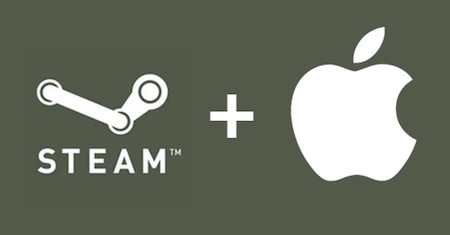 If you’re familiar with the PC and Mac gaming scene, then you have most definitely heard of Steam: a game distribution platform by Valve that collects thousands of games in a single marketplace that’s easy to use and aggregates users worldwide enabling them to communicate through the platform. Steam, first released on Windows PCs, came out on OS X last year after much anticipation, quickly becoming many users’ favorite way of discovering and downloading games for the Mac.

Member of Steam’s forums Political Gamer recently visited the Valve headquarters and reported an interesting tidbit from his visit and talk with Valve co-founder Gabe Newell: Valve is apparently “looking into” iOS and Android as possible platforms for Steam’s expansion in the future:

After waiting in the lobby for a few minutes it turned out Gabe was in the office and wanted to say hi. To my great delight he was playing DOTA 2 when we walked in and from what I can see the game already looks very promising. After a little “sneak peek” we sat down to talk about Steam and other goings on in Valve. During this chat he confirmed that Steam will get a video recorder very soon, also he said they were looking into the iOS/Android platform for possible expansions with Steam. He also siad that the Source film maker is in the pipeline for a public release. After the chat was over he happily signed my copy of the Orange box and sent me on my way to Robin Walker.

The report doesn’t provide any additional details on Valve’s plans for a mobile Steam, and we only speculate that the development studio might be considering an iPhone or iPad client to check on your online Steam account and friends. Certainly Apple would never approve an iOS Steam app that lets you download and play games out of the App Store, whilst on Android Valve could easily deploy and alternative store like Amazon did (and got sued for the name choice). On iOS, Steam as we know it would be a difficult goal to accomplish: Apple doesn’t allow the installation of apps from alternative sources (the so-called “side-loading”) and the possible implementation of in-app purchases wouldn’t fit Steam’s growing catalogue of games.

Apple has turned its iOS and Mac App Stores into the perfect place for users to discover and buy games, and we don’t expect Steve Jobs to change his mind anytime soon about allowing other developers to “break the ecosystem” with unofficial app stores. So perhaps Steam for iOS will be a simple app to manage your online account? Or a “brand” for App Store developers to publish their games? We don’t know yet, but it’s interesting that Valve is at least looking at the possibilities offered by iOS. [via]