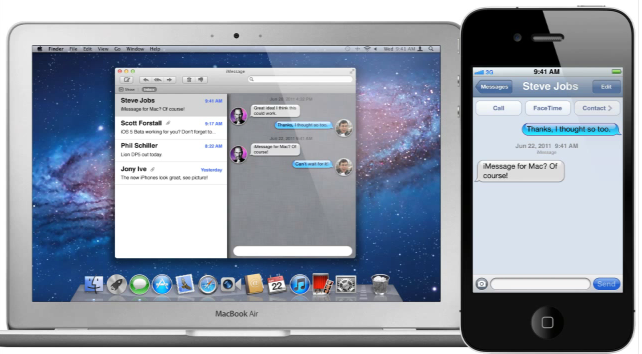 Ever since Apple unveiled iMessage for iOS 5, its new universal messaging protocol to send free text messages, videos and pictures to other iOS users, many have wondered whether the new app would be integrated with the Mac as well, perhaps in a new version of iChat. iMessage for iOS brings some new functionalities like delivery and read receipts in real-time, as well as sync and Messages.app integration, but it resembles the desktop iChat in the way it visualizes new messages, or lets you see when a person is typing. With the upcoming iCloud integration in OS X Lion, launching this Fall and available right now to developers for testing as a beta add-on, there is the possibility Apple will release a standalone iMessage app for Mac in the Mac App Store once iCloud is available for all. Just like they did with FaceTime, the app could be sold for $0.99 in the Store, and pre-installed by default on new systems.

Based on this kind of speculation, designer Jan-Michael Cart, creator of other iOS 5 concepts we posted ahead of WWDC, has come up with an interesting idea for iMessage on OS X Lion. The messaging protocol could have its own desktop app powered by real-time notifications, bounce on the Dock upon receiving new messages, and have a Mail-like toolbar for composing new messages and search among existing ones. We imagine having a desktop iMessage app could mean users would be able to rely on system-wide integration with Services to send any text to iMessage, as well as start a new FaceTime session from a contact in iMessage or the Address Book.

The concept video is interesting and we have embedded it after the break. iMessages are currently enabled in the iOS 5 betas for iPhone, iPod touch and iPad, but some code strings found in the latest Lion developer preview suggest Apple might be working on a desktop counterpart to launch later this year.