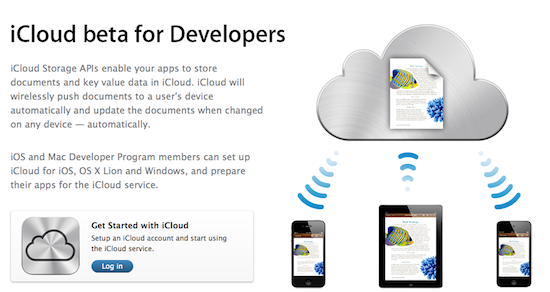 Right on time after iOS 5 and OS X Lion developer seeds, Apple has updated the Dev Center to include the new iCloud beta for Developer pages, which lists all the instructions to get iCloud going on iOS devices, Macs and iPhoto. Indeed, Apple is including a download link to iPhoto 9.2 to test the new Photo Stream features in a separate development environment (your existing library won’t be ported over). Obviously, many of these features are exclusive to Lion and Apple clearly tells developers to go download the latest OS X Developer Preview if they want to test iCloud’s functionalities.

The iPhoto update will replace your current version of iPhoto. Your existing iPhoto Library will NOT open with this version of iPhoto. For this reason it is recommended that you work on a test/development system ONLY when using this release. You will not be able to revert the system to an earlier version of iPhoto without doing a clean install of Mac OS X and reinstalling iPhoto either from your original installation DVD or by downloading from the Mac App Store.

An iCloud Control Panel for Windows is also available to enable “Photo Stream, Contacts, and Calendar” on a PC through iCloud. A new iCloud account can be set up in the iOS 5 setup assistant or Settings app; in Lion, iCloud can be enabled from the Internet Accounts section in System Preferences – Developer Preview 4 is likely required for this action. Once installed an enabled on all devices, Apple is asking developers to test the new features and take advantage of the new APIs in Lion and iOS 5 – it will be interesting to see how devs will implement the iCloud storage API unveiled this morning.