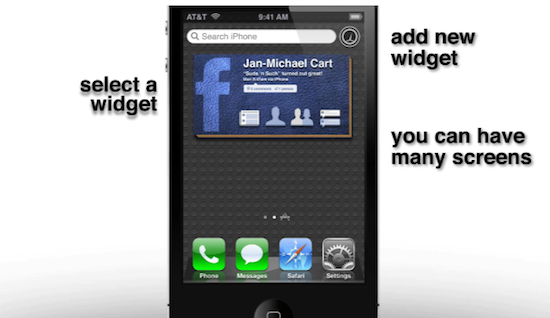 With speculation running wild about Apple’s upcoming software announcements at the WWDC ‘11 – where the company is expected to showcase the next versions of iOS and Mac OS X – it doesn’t come as a surprise that the Internet is exploding with concepts and mockups of what iOS 5 will look like on the iPhone and iPad, let alone the fan-made renderings that aim at giving us a possible glimpse of the iPhone 5. Jan-Michael Cart, the same guy behind the iOS 5 voice recognition concept we posted two weeks ago, has come up with a new interface idea for the Dashboard, available on YouTube alongside his collection of iOS concept videos.

Of all the videos created by Cart in the past weeks, we think this might be the nicest and most interesting one. By taking inspiration from the Lion Dashboard, which retains the same look of the Snow Leopard one but can be launched with a single swipe to the right from the desktop, Cart imagines an iOS Dashboard that resides on the current Spotlight page on the left of the Home screen, and can be activated with an horizontal swipe. Rather than replacing the Spotlight search with the Dashboard, Cart has conceptualized a way to add widgets to this screen and start a new search by simply hitting the box at the top, like you normally would on iOS. When performing a search the Dashboard screen blurs in the background; Cart has also imagined a variety of widgets that can be placed on multiple pages on the left, such as a Facebook box and a Twitter ticker to stay on top of the latest messages from users you follow. In another video posted on his YouTube channel, Cart also describes how widgets could be created from the dedicated Dashboard page, but also dragged to the Home screen. As to how users would be able to swipe between the Dashboards and Springboard pages, Cart believes the Home button would play a key role in both cases, as seen in the screenshots below. 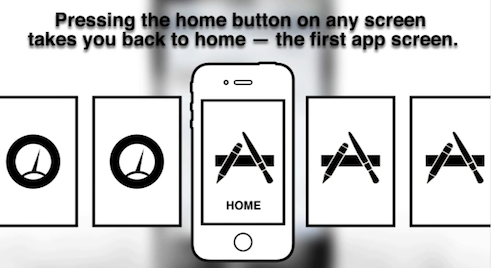 We have embedded the video after the break. Whilst recent rumors have claimed Apple is focusing on features like location and smart voice recognition for iOS 5, it’s likely that ahead of the public launch of OS X Lion Apple will consider porting over some functionalities from the desktop to mobile devices. The video below is a good example of that.