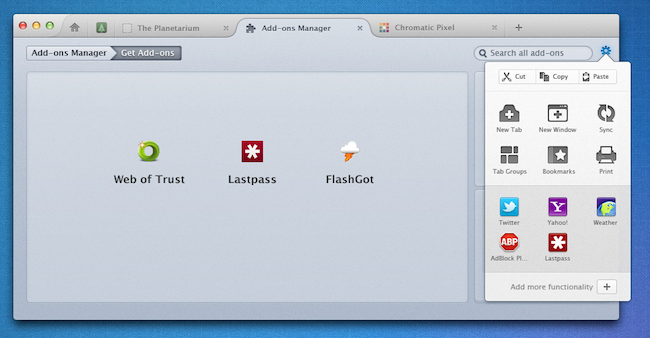 Like Google’s Chrome browser, Mozilla announced earlier this year its intention to move to a fast release cycle for new major versions of its popular browser for Windows, Linux and Mac, Firefox. Following the launch of Firefox 4 in March – which brought major design changes from Firefox 3 – Mozilla moved up its schedule and released Firefox 5 in June, just three months after the previous upgrade, adding a “Do not track” feature for all browsers and platforms, as well as other HTML5 and CSS improvements, although the UI design remained largely unchanged from Firefox 4. As part of Mozilla’s new channel-based alpha and beta testing, Firefox 6.0 is already available as beta, whilst Firefox 7.0 has been made available as early developer preview (or alpha) in the Aurora channel. You can read more about Mozilla’s new “every six weeks” policy here.

While waiting for the future Firefox 6.0 and 7.0, Mozilla’s Product Visual Designer with the Firefox team, Stephen Horlander, has posted some mockups of what the future Firefox could look like on Windows and OS X machines. The images, posted as a presentation on Mozilla’s website, don’t necessarily reflect any upcoming feature in the next versions of Firefox, but they provide some kind of insight into the kind of discussions the team is having in regards of what could come next.

As you can see from the image above (more here), the proposed solution unifies Firefox’s top bar to accomodate tabs, a Home button, a new tab button, as well as integrated add-on manager that has its own tab (much like Google Chrome opens its settings in new tabs, rather than windows). The mockups have been built on top of OS X Lion, as you can tell from the window texture and the traffic lights in the upper left corner. Speaking of which, Horlander has also played around with Lion’s monochrome and popovers, implementing monochromatic icons for cut/copy/paste, bookmarks and tab controls inside a settings popover accessible from a gear icon next to the address bar. Another screenshot shows native full-screen support with minimal chrome when browsing a website. On the PC side, the proposed changes are similar, but based on Windows’ default theme.

It’ll be interesting to see whether these Lion-inspired changes for Firefox on the Mac will evolve into an actual release in the coming months. Meanwhile, Windows users can install this fan-made theme that takes some of Horlander’s UI elements, and applies them to the current version of Firefox.