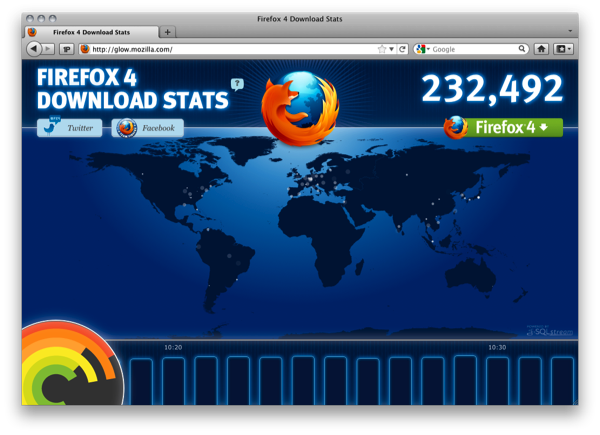 While sites leaked out the Firefox 4 download yesterday, rumors cropped up that the download was the 2nd release candidate with the 4.0 name. I wasn’t interested in verifying the download or posting it until it officially went, and as of this morning you can download and visualize Mozilla’s success in realtime from glow.mozilla.org. It’s very cool, and also provides ample opportunity to download Firefox 4.0 for yourself.

The new Firefox 4 interface not only looks a lot better (the address bar improvements are very cool), but now you have something Panorama available where you can group tabs by dragging and drop websites into collections for work, play, research, or however you want to organize them. According to Mozilla, Firefox 4 3x faster than Firefox 3.6 in the Sunspider test, and scores 6x higher on the V8 test. You can check out all the features here and download Firefox 4 from the same page.