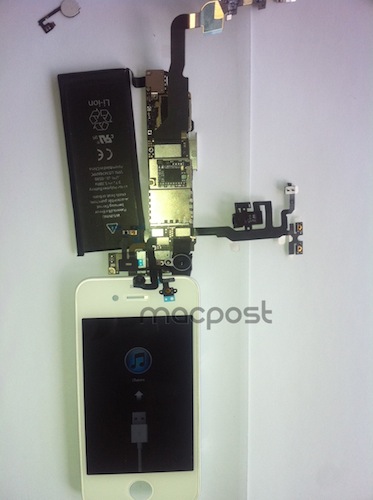 A photo discovered earlier today by PhoneArena on Chinese microblogging service Weibo seemed to “confirm” that the next-generation iPhone would indeed run a modified version of the A5 CPU first introduced by Apple in the iPad 2 last March. As usual with photo leaks, the image was blurry and the A5 logo on the integrated chip in the mainboard could have been easily faked with Photoshop. Several outlets, however, suggested that the photo could be real, albeit belonging to the rumored “iPhone 4S” device in the works, rather than the real, “all-new” next-generation iPhone 5. Comparisons of this morning’s photo with previously posted iPhone 4S/5 parts seemed to confirm the theory that the newly captured part was legit. 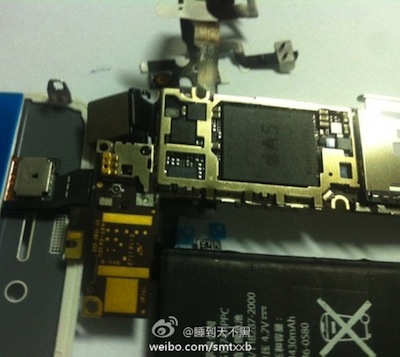 There’s been much controversy and speculation in recent months as to whether Apple will introduce a single iPhone 4-like update in the next weeks, a major redesign called “iPhone 5”, or both. Most recent rumors are claiming Apple will release two new iPhone models this Fall to target different market segments – namely, there’s a great opportunity for Apple in China and other pre-paid markets, where a cheaper, off-contract “iPhone 4S” could possibly sell very well and still appeal to consumers as a premium device. Apple executives have hinted at the pre-paid market before.

A new photo which seems to corroborate this morning’s alleged leaked has been published by MacPost, which claims it depicts the new “iPhone 4S” with an A5 chip and slightly updated battery. As many noted this morning, the battery unit in the allegedly leaked photos reports “1430 mAh”, instead of the iPhone 4’s 1420 mAh. MacPost’s follow-up picture shows a partially-assembled device displaying iTunes’ activation screen, as well as an iPhone 4-like white front panel. According to the website, this should confirm the “4S” nature of the device (that is, the “minor” upgrade – identified by many as N94 – and not the “real” iPhone 5), also because of the several components that are shown in the photo, and “leaked” on the Internet over the past months. Those components they mention were deemed as “iPhone 5 parts” at the time. Furthermore, the front panel’s speaker grille is heavily resembling of white iPhone 4 prototypes prior to the white iPhone 4’s public debut.

There’s still much confusion floating around Apple’s plans for the next iPhone(s), and it is worth noting the same A5-enabled, white, iPhone 4-like device was spotted back in April running on T-Mobile network. 9to5mac shares my personal theory in that if these photos are legit, they’re most likely to portray an early iPhone 4-like prototype for a next-generation iPhone, rather than a recent “final design” unit.

According to an article from The New York Times published last week, a “fairly different” iPhone 5 with better specs (A5 CPU, 8 MP camera) is just “weeks away”.