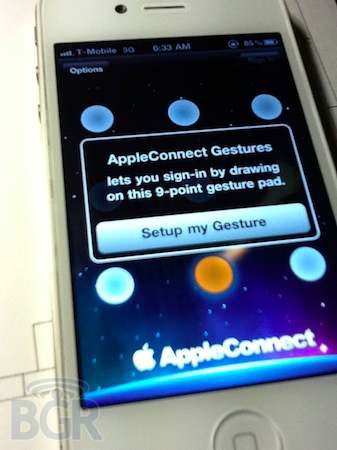 A series of photos posted earlier today by Boy Genius Report show an unreleased white iPhone 4 unit running on T-Mobile USA network. The device looks like an iPhone 4, although, as BGR notes, the proximity sensor looks different than the one shown in the (allegedly) final white iPhone 4 that’s been already sold in the UK. BGR claims the device, just like the Vietnamese videos from last week, is running an old and internal test version of iOS 4, confirmed by the several Apple internal and field-testing applications like Radar and Apple Connect or the preference panels to measure the performances of the device.

That’s right, you’re looking at photos of an iPhone prototype with T-Mobile USA 3G bands. The actual internal model is N94, and if you remember, the Verizon model is N92 while the standard GSM variant is N90. We have verified that the phone itself is running a test version of Apple’s iOS, much like the one we saw in those videos from Vietnam, and it includes internal Apple test apps like Radar and Apple’s employee directory app. Additionally, the front of the white iPhone pictured looks a little different from the photos of the retail white iPhone 4 that surfaced recently — specifically, the proximity sensor has changed on the retail version.

The model number of this white iPhone 4 is N94, the same one that months ago was mentioned in some iOS 4.3 code strings related to the A5 chip – also implemented on the iPad 2. Whilst rumors point to the white iPhone 4 finally being released on April 27th, the N94 model number and A5 processor indicate this might be an updated version of the iPhone 4 coming out later this year – perhaps the “iPhone 4S” select game developers are already testing ahead of the WWDC and the iOS 5 announcement. It’s also worth remembering that AT&T has filed documents in the US to acquire T-Mobile – if the two networks merge, the iPhone will eventually work on the old T-Mobile network (which currently has different radios and frequencies than AT&T). However, the acquisition is rumored to take several months before completion, and Apple could release an iPhone 5 / iPhone 4S this Fall that also runs on the existing T-Mobile network.

Check out the full gallery of leaked shots here.