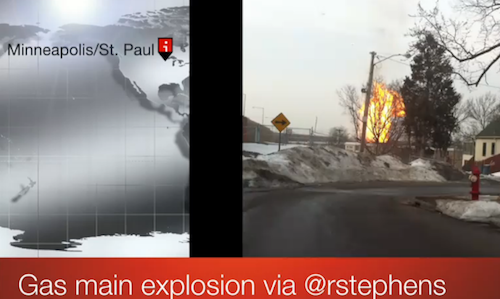 Geek Squad founder Robert Stephens was driving to work yesterday when he witnessed a large gas explosion a couple of blocks away. To see if someone had called 911 yet, he drove with his car near to the explosion site and started recording a video with his iPhone 4. A couple of minutes later, the video was edited and uploaded to the Internet to become the first semi-professional footage used by media organizations to break the news of the Minneapolis explosion.

How did the video end up on TV if it was simply shot with an iPhone? People shoot videos with their smartphones every day, but they’re not chosen to be broadcasted. It turns out, Stephens quickly transferred the video file over to his iPad 2 through the Apple Camera Connection Kit, and started editing it. He added a map, subtitles, and cleaner voice over. All of this using iMovie for iPad in a parking lot while he could still feel the heat of the explosion on his face. Once done editing, he sent the video to Youtube and CNN iReport over 3G and was one of the first eye-witnesses to tweet about the explosion and post footage. He also tweeted permission to use the video, which ended up on MSNBC and CNN coverage in a matter of minutes.

The story here is a great example of “citizen journalism”, with an Apple twist. Everyday devices like an iPhone and an iPad become indispensable tools when it comes to quickly capturing a particular scene, and uploading the results on to the Internet so everyone can see it. Furthermore, semi-professional videos edited in software like iMovie can be used by major news organizations without looking like “yet another amateur Youtube video”.

Something is also very clear: Apple needs a better way to transfer files between iOS devices without the need of hardware. Perhaps AirDrop for iOS. Check out the video below. [TwinCities via TUAW]