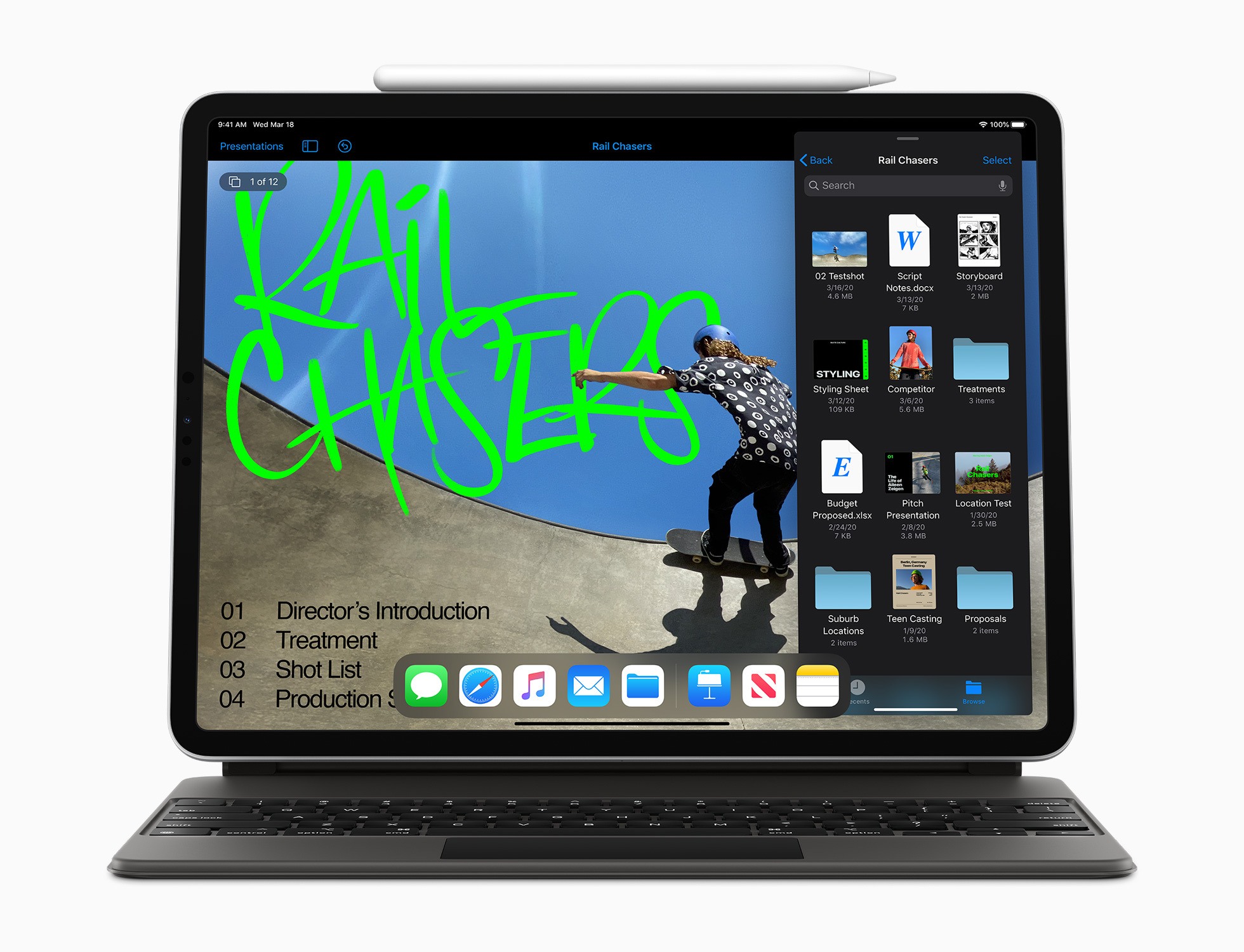 Apple has released noteworthy updates for its iWork suite of Pages, Numbers, and Keynote, alongside a new version of iMovie, all of which have as their hallmark feature mouse and trackpad support on iPadOS. There are a variety of other nice changes too, big and small, that make these apps more powerful than ever across all platforms.

END_OF_DOCUMENT_TOKEN_TO_BE_REPLACED 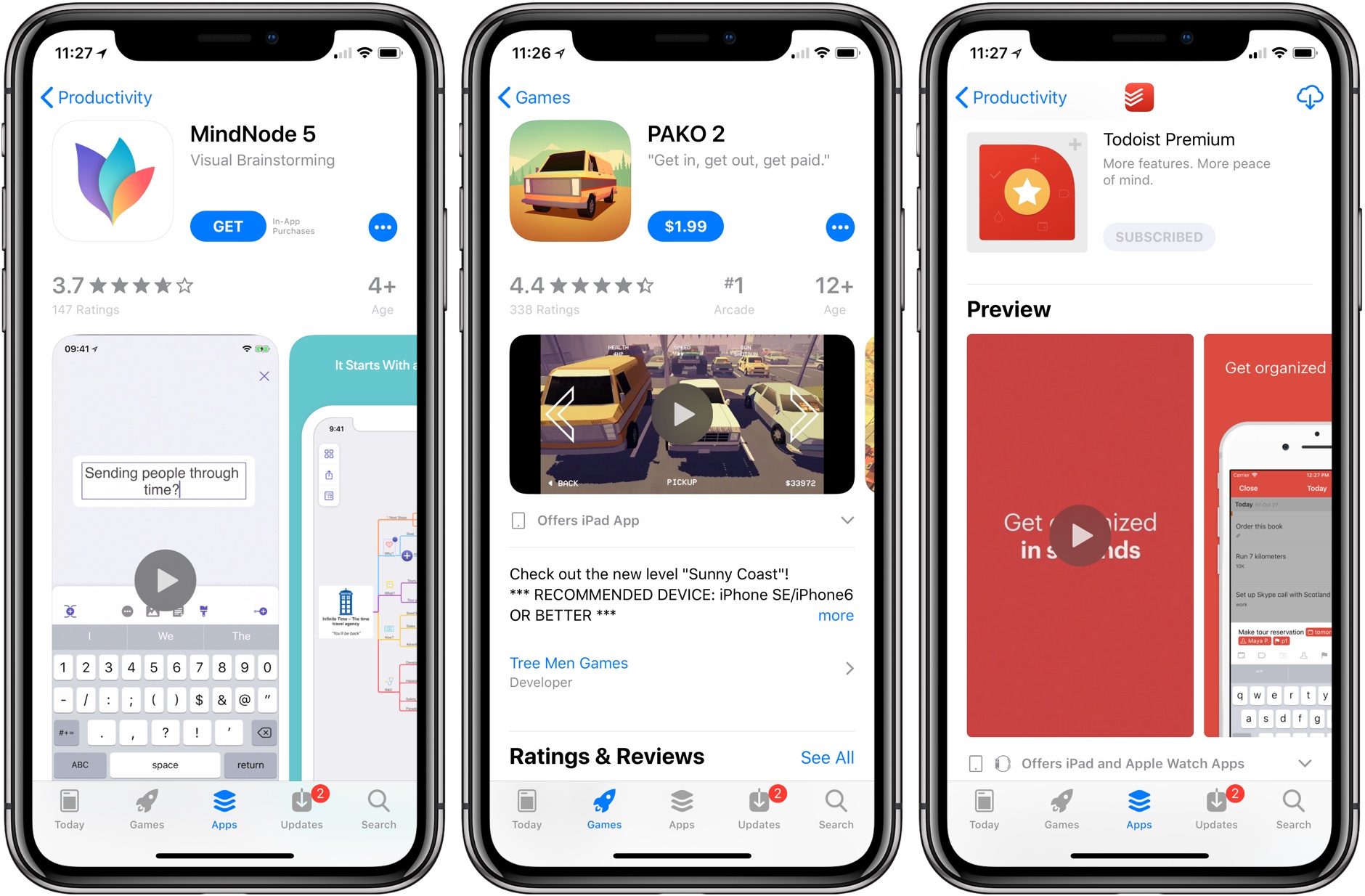 Developers can use iMovie for Mac to create the App Preview videos that you see in the App Store. It isn’t a new feature, but until version 10.1.9 was released today, the feature did not support the iPhone X or certain iPad sizes.

Other video editing apps can be used to create App Previews, but iMovie is convenient because it automatically configures export settings to meet the requirements of App Previews. The trouble is, releasing an update to support the iPhone X that was released five months ago is too late. To make the feature useful to Apple’s best developers who support new hardware as soon as it’s released, these sorts of updates should coincide the debut of new iOS devices.

Juli Clover of MacRumors reports on an update to the pricing of several Apple apps:

iMovie, Numbers, Keynote, Pages, and GarageBand for both Mac and iOS devices have been updated and are now listed in the App Store for free.

Previously, all of these apps were provided for free to customers who purchased a new Mac or iOS device, but now that purchase is not required to get the software. Many Apple customers were already likely eligible to download the software at no cost if they had made a device purchase in the last few years.

All of these apps have been available free to anyone purchasing a new iOS device since September 2013 – or 2014 in GarageBand’s case – so today’s updated pricing should come as no surprise. Likely the majority of devices in the world today that are modern enough to run the latest versions of these apps will have already enjoyed the privilege of free downloads. Today’s change will be a welcome one to everyone with an older device though.

Apple’s new version of iMovie is sleek and sophisticated both on the Mac and on iOS devices. It retains a lot of advanced features from prior versions, but keeps its interface clutter- and confusion-free for newer users. And it’s added a new avenue for easily sharing movies to your computer and Apple TV. I could go on like this for awhile, but instead of writing a whole review here, I’m going to cut to the juicy parts and focus on twenty new and improved features in iMovie for the Mac and on iOS.

If you’re looking for an article that covers all the changes and new features in iMovie, Serenity has a great overview. I can’t wait to get an iPhone 5s to try the slow-motion editing.

While Apple’s iWork updates for Pages, Keynote, and Numbers include support for iCloud and the MacBook Pro with Retina display, today’s updates for professional and creative applications such as Aperture (already updated to take advantage of the Retina display), iPhoto, and iMovie consist of stability improvements and further integration with this morning’s release of OS X Mountain Lion.

The latest version of Aperture includes updates for added compatibility with Mountain Lion, addresses stability issues that can occur when the app is in Full Screen mode, tweaks auto white balance when using Skin Tone mode, and now lets users sort projects and albums in the Library Inspector by date, name, and kind.

Today’s iPhoto update is about bringing sharing options to Messages and Twitter, whilst fixing some stability issues and improving compatibility with Mountain Lion. Last month, iPhoto and Aperture were updated with the release of the MacBook Pro with Retina display. Among other things, this update unified the two apps’ libraries, enabling them to access each others’ stored photos natively.

While iMovie’s release notes don’t specifically mention Mountain Lion on the Mac App Store, it does call for fixes with third-party Quicktime components, improved stability when viewing MPEG-2 clips in the Camera Import window, and brings sound back to MPEG-2 clips important from a camera (where it may have been absent before).

You can download Aperture, iPhoto, and iMovie from the Mac App Store. 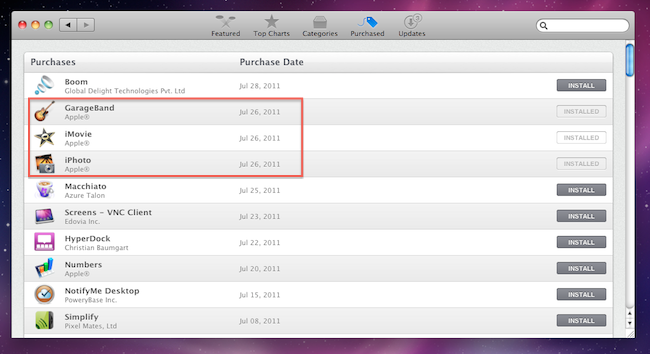 If you’re smart, talented, and own copies of iPhoto ‘11, iMovie ‘11, and GarageBand ‘11 from the Mac App Store, it’s time to check for an update! Today we’re seeing general improvements all around for the trio of creative applications, including support for opening iMovie projects from iMovie for iOS.

iMovie: What’s New In Version 9.0.4
This update improves overall stability and addresses a number of minor issues, including the following:

• Support for opening projects imported from iMovie for iOS.
• Fixes an issue where some audio adjustments were not preserved.
• Addresses a performance issue when using large quantities of video clips with keywords.
• Resolves issue with slow application launch when working with large iPhoto libraries.

• Fixes an issue with the GarageBand Lesson Store not completing single or multiple lesson downloads.
• Corrects issues with some tempo-based effects falling out of sync with main song tempo.
• Resolves problems with Magic GarageBand project files not opening up correctly in the GarageBand tracks view.

A few minutes ago Apple released updates to GarageBand for iPad and iMovie for iOS, bringing the apps to versions 1.0.1 and 1.2.1, respectively. The most notable update in GarageBand is the inclusion of AirPlay audio output which now allows to send tracks to external speakers wirelessly. GarageBand also got Bluetooth compatibility and HDMI output with Apple’s Digital AV Adapter. Alongside bug fixes, stability improvements and possibility to import AIFF, WAV, CAF audio files and Apple Loops at 16 bit /44.1 kHz, the new GarageBand for iPad can receive audio files from the system clipboard via copy & paste. A support document details the new functionality:

You can paste an audio file from an app that supports copying audio to the clipboard. GarageBand for iPad supports uncompressed audio files with a sample rate of 44.1 kHz and 16-bit depth (the standard for audio CDs).

Audio files copied from another app can be pasted to Audio Recorder or Guitar amp tracks.

iMovie for iPhone and iPad received an update as well with the following changes:

Both the GarageBand for iPad and iMovie updates are available now in the App Store. 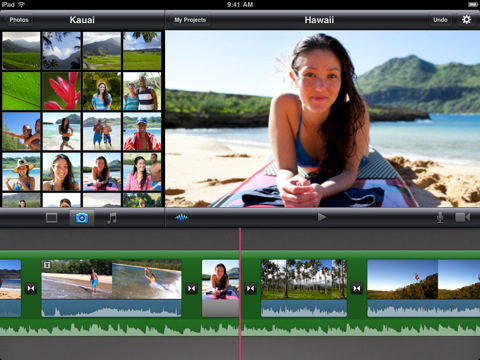 With the release of the iPad 2, Apple updated the official iMovie app for iOS to include native support for the device and a brand new user interface that takes advantage of the features and real screen estate offered by the tablet. With new precision controls, intuitive UI and several sharing functionalities, we have seen iMovie for iPad has become for many the perfect way to quickly import a video, edit it with cool transitions and subtitles, and send it off to the cloud. These videos can be imported from an iPhone or iPod Touch, or just shot with an iPad 2 in HD.

Weeks ago we discussed Apple needed a better way to let iOS devices communicate with each other to share information and data without the need of using the cable. Something like AirDrop for iOS. As it stands now, you’re either forced to attach cables, sync with iTunes, or upload to MobileMe or Dropbox and download media again on a second device.

But the problem with the iMovie app for iOS also lies in the fact that it doesn’t recognize “certain non-Apple video clips” recorded with non-iOS devices. A support document updated yesterday explains:

iMovie for iOS is designed to work with video recorded with iPad 2, iPhone 4, and iPod touch (4th generation). To ensure optimal performance, the app filters out certain non-Apple video clips from the Video browser. These incompatible clips cannot be added to your iMovie project.

It’s simple: videos from your camcorder might not be compatible with iMovie out of the box, so forget about the camera connection kit or other techniques. Apple doesn’t provide technical specifications, but we’re pretty sure a free app like Handbrake can help you along with the conversion of a video to an iOS-compatible format. [via AppAdvice]