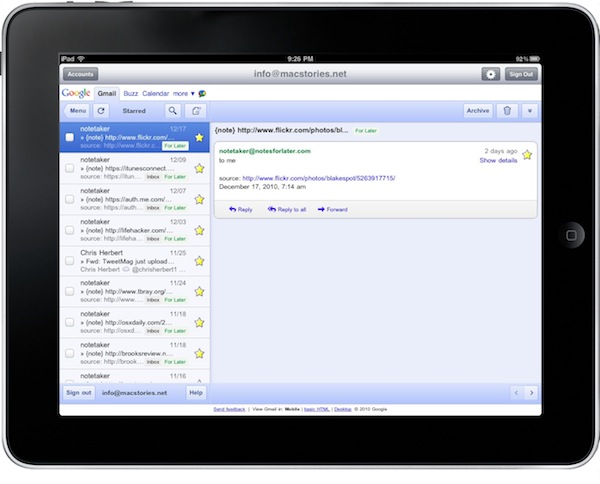 In the past months, I’ve tried a lot of iPad apps to access multiple Gmail accounts. Sure, I could use Apple’s Mail app to manage them. The problem is, Apple Mail doesn’t let me access most of the features of Gmail and I love the Gmail web UI for iPad. Also, Google has been busy updating Gmail to make it play nicer with mobile devices (smoother scrolling, better selections in the left panel) and these native “wrappers” provide a way to quickly switch between accounts with the tap of a button.

So far I’ve tried Mailboxes, MailWrangler, MultiG and Mailroom on the iPhone. On the Mac I use Mailplane (which is simply amazing) and on the tablet I’ve sticked with MultiG for several weeks. Until Google changed something on its backend, MultiG stopped working and the developer didn’t release an update. I had to change, and I went back to Apple Mail because of all the alternatives I had tested none of them managed to top the excellence of MultiG. 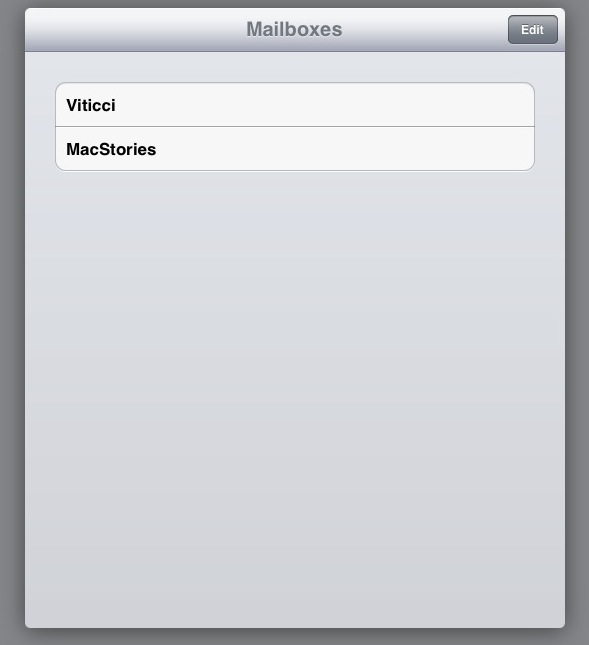 Mailboxes, which I first reviewed in July, looks like the app I’ll come back to in the next weeks. An update was released two days ago, and it’s very good: it adds iOS 4.2 compatibility, fixes issues with Google Apps logins and allows for multiple Gmail accounts to be grouped under a single passcode. In Mailboxes, you can create multiple “identities” and group as many email accounts as you wish within them. The app will let you quickly switch back and forth between accounts assigned to an identity from a popover. The Gmail web UI for iPad seems to be substantially faster and nicer, too.

Support for iOS 4.2 means the app won’t log you out of Gmail when it goes in the background, and “fast account switching” stores Gmail cookies so you can access your account even without an active internet connection. Yes, you can jump between accounts and read emails when the WiFi is off. It works really well.

Mailboxes has come back offering what’s currently the perfect Gmail wrapper for the iPad. The app is minimal, fast and it’s got passcodes. You can’t really ask for more right now. As usual, it’s available at $2.99 in the App Store.