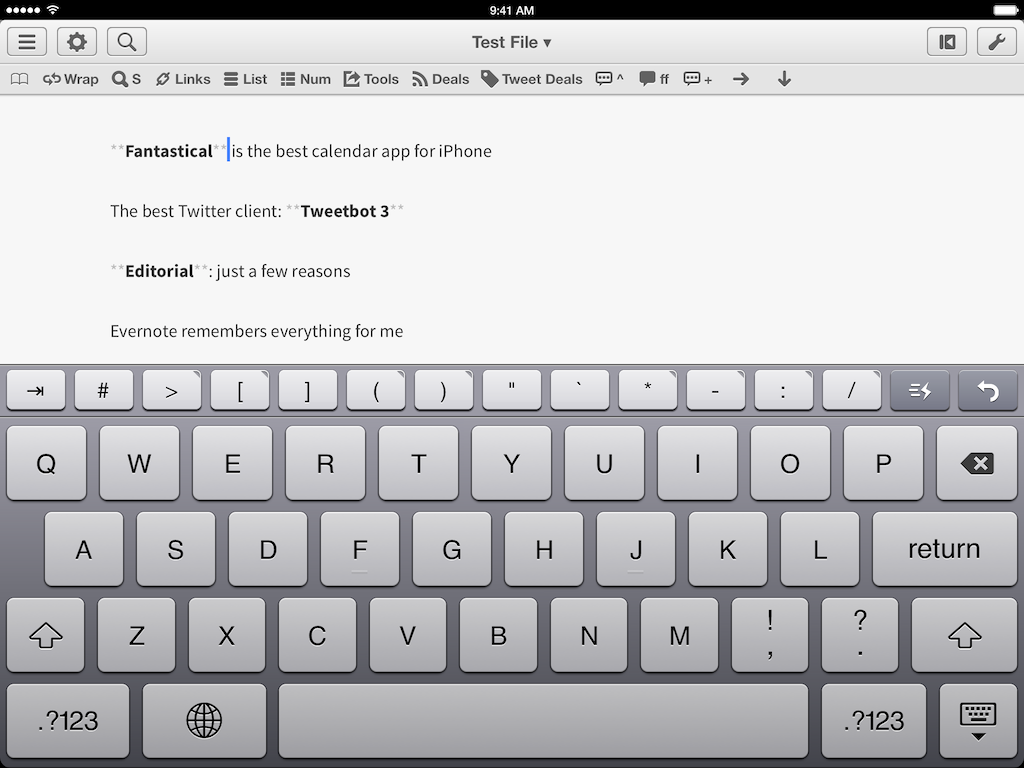 When I’m writing with Editorial or Byword, I miss the multiple cursors feature of Sublime Text. Seemingly an extra geeky addition with no practical utility, multiple cursors had become part of my editing workflow as they allowed me to select multiple positions in a document and act on them at once. For example, I could select multiple lines and prefix them with an asterisk to turn them into a Markdown list, or select multiple instances of a word and modify them with a single keystroke without using Find/Replace or other hacks. The feature was built into Sublime and it was great. So of course I made a workflow for Editorial.

Because it’s the end of the year and I’m feeling festive and thankful, I’m posting two workflows to simulate multiple cursors in Editorial. The first one allows you to save selections for multiple bits of non-contiguous text at once and, when you’re done, wrap them inside any character(s); it’s useful if you want to make multiple words bold/italic, or if you want to enclose them inside parentheses. The second workflow lets you add inline Markdown links for each selection, fetching a webpage URL from the Editorial browser.

Rather than provide you with static screenshots and a boring written explanation, here’s a video of the workflows in action.

Here’s a few notes on the first workflow:

As for the second workflow with inline links:

As you can see, these workflows are pushing the limits of what’s currently possible in Editorial for text selections, repeat blocks, and non-modal user interaction. Though you can use the first workflow to add whitespace before text (just place the cursor without selecting anything and enter “y”) and you could probably tweak the workflows to be a little more flexible (text replacements instead of wrapping, etc), my solution isn’t obviously a full-fledged alternative to Sublime’s real multiple cursors.

For the future, it’d be great to have true “while” or “until” conditions for repeat blocks in Editorial, as well as more actions for non-modal interaction with custom controls. Or maybe multiple cursors straight on the iPad. Until then, you can download my workflows here and here. Enjoy, and Happy New Year.