1Password for Families builds on our new Teams infrastructure to give you everything you need to protect your loved ones. And it’s only $5 a month for your family of 5.

It’s never been easier to share 1Password with your whole family. There’s no sync service to set up, vaults appear automatically, and there’s an Admin Console where you can invite people and manage sharing with your family.

Every family member gets their own copy of 1Password, and their own personal space to store private information. With this, you can give them the tools they need to stay safe without taking away their independence.

The service costs $5/month and it comes with the full suite of 1Password apps for every platform. It also offers 1 GB of document storage for attachments (2 GB if you’re already a 1Password user and sign up before March 21), and the interface to manage access and review permissions looks polished and friendly. I should seriously consider this so my parents can stop calling me about their forgotten passwords (I love them, but they’re terrible with online accounts).

Nice (and free) update to 1Password for Mac released today:

It’s a new year and we’re starting things off on a strong note with a great new update to 1Password for Mac: Version 6.0! This latest version of everyone’s favorite password manager is looking better than ever, and we couldn’t have done it without you. Your awesome feature requests, suggestions, bug reports, and usage scenarios really helped us decide what to include in this release.

If you use multiple vaults, you may want to check out the new functionalities in 1Password 6.0 (release notes here). I don’t, but I may reconsider this to set up vaults for my family and MacStories.

Also of note: AgileBits built a framework to use CloudKit JS for the version of the app sold outside of the Mac App Store. Apps that aren’t available on the App Store can’t implement iCloud support natively, but AgileBits figured out a way to use CloudKit technologies for web apps in their Mac client:

From our customers’ point of view, iCloud Sync in the AgileBits Store version of 1Password will look a little bit different during the initial setup. CloudKit JS does not use the iCloud settings from OS X, so to authenticate with Apple, 1Password will prompt you to log in to your iCloud account by displaying the iCloud login page in your default web browser. Once you have logged in to your iCloud account, CloudKit web services sends an authentication token back to 1Password, which it then stores (securely, of course). This enables 1Password to sync with iCloud without having to reauthenticate each time. Since the iCloud login for CloudKit JS is completely separate from the iCloud settings in OS X System Preferences, you can even use a completely different iCloud account if you like!

I don’t know whether I should be impressed that AgileBits created this workaround or sad about Apple’s decision to restrict iCloud to the semi-abandoned Mac App Store (maybe a bit of both). AgileBits plans to make AgileCloudKit open source, too. 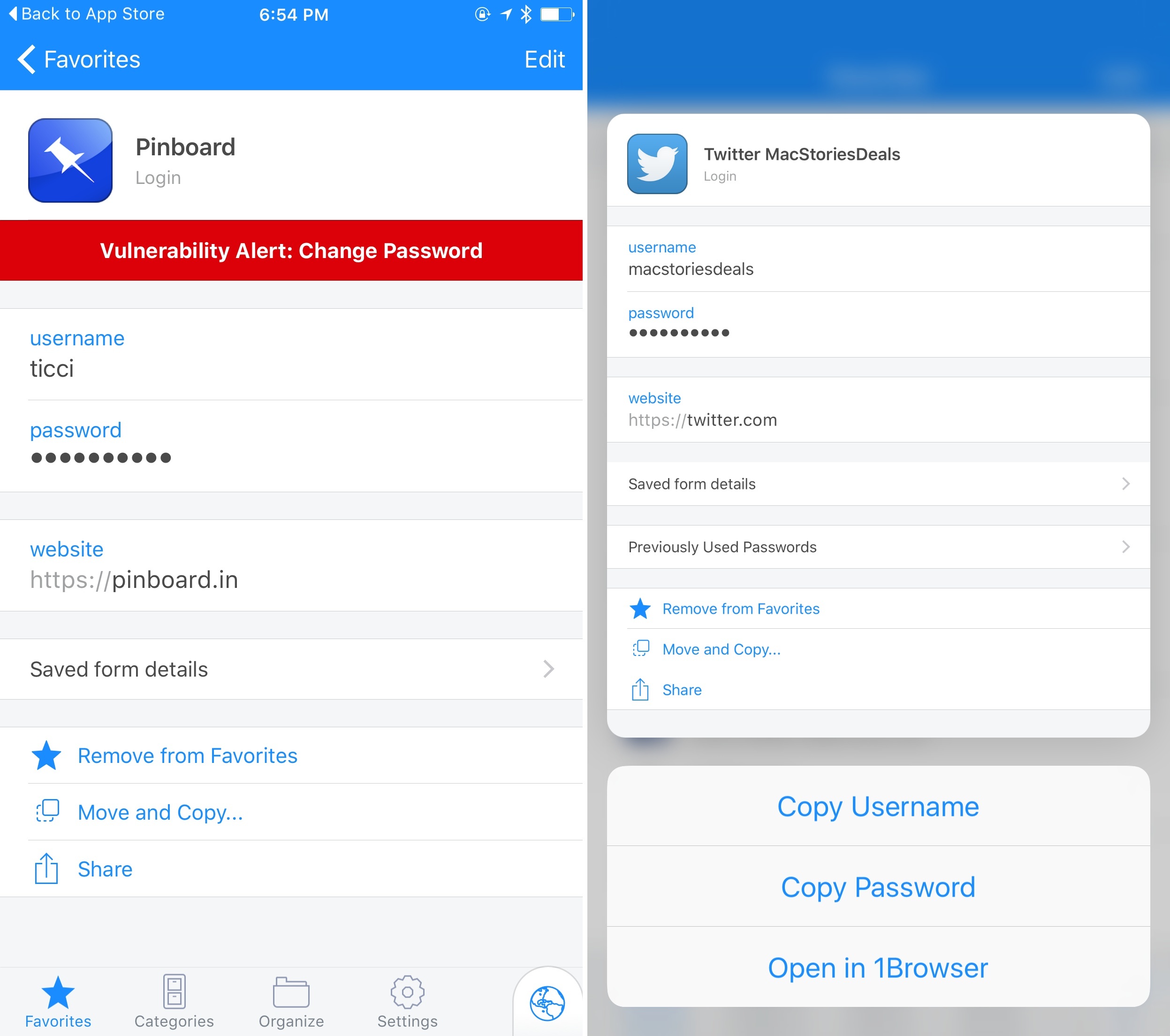 Released earlier today on the App Store, 1Password 6.2 for iOS has brought some nice additions for security and speed. As an app built on the premise of staying secure and accessing private information quickly, I find these improvements pleasant and necessary.

END_OF_DOCUMENT_TOKEN_TO_BE_REPLACED

1Password for Teams allows you to share the convenience and security of 1Password with everyone in your life. It gives you the tools you need to control and manage access to your most important information.

New to 1Password for Teams is the Admin Console, a central location to manage your team, vaults and items. The Admin Console makes teamwork a breeze and it completely changes the way you use 1Password in a group environment. It’s packed with features you’ve been asking for, and several new ones you didn’t know you needed :)

I’ve been using 1Password for years and this seems like a fantastic product for any business or team that needs to share logins between users. Just the ability to easily control who has access to which passwords and easily remove access to employees who leave the company will be invaluable. You can view all of the features of 1Password for Teams here.

I had no idea developers could use the 1Password iOS extension to prefill one-time passwords in addition to regular usernames and passwords in their apps:

Did you know that our App Extension API supports one-time passwords? In fact, it’s been there since version 1.5 of the API. If you haven’t already, I recommend that you upgrade to the latest version, 1.6.1. Not only can your users fill their usernames and passwords in your app with a few simple taps, their one-time passwords can be filled just as easily.

I use the 1Password extension every day (it has strong app support at this point), but I’ve never come across apps that supported one-time passwords as well. Speaking of which, it’s always a good time to switch from Google Authenticator or Authy to 1Password. 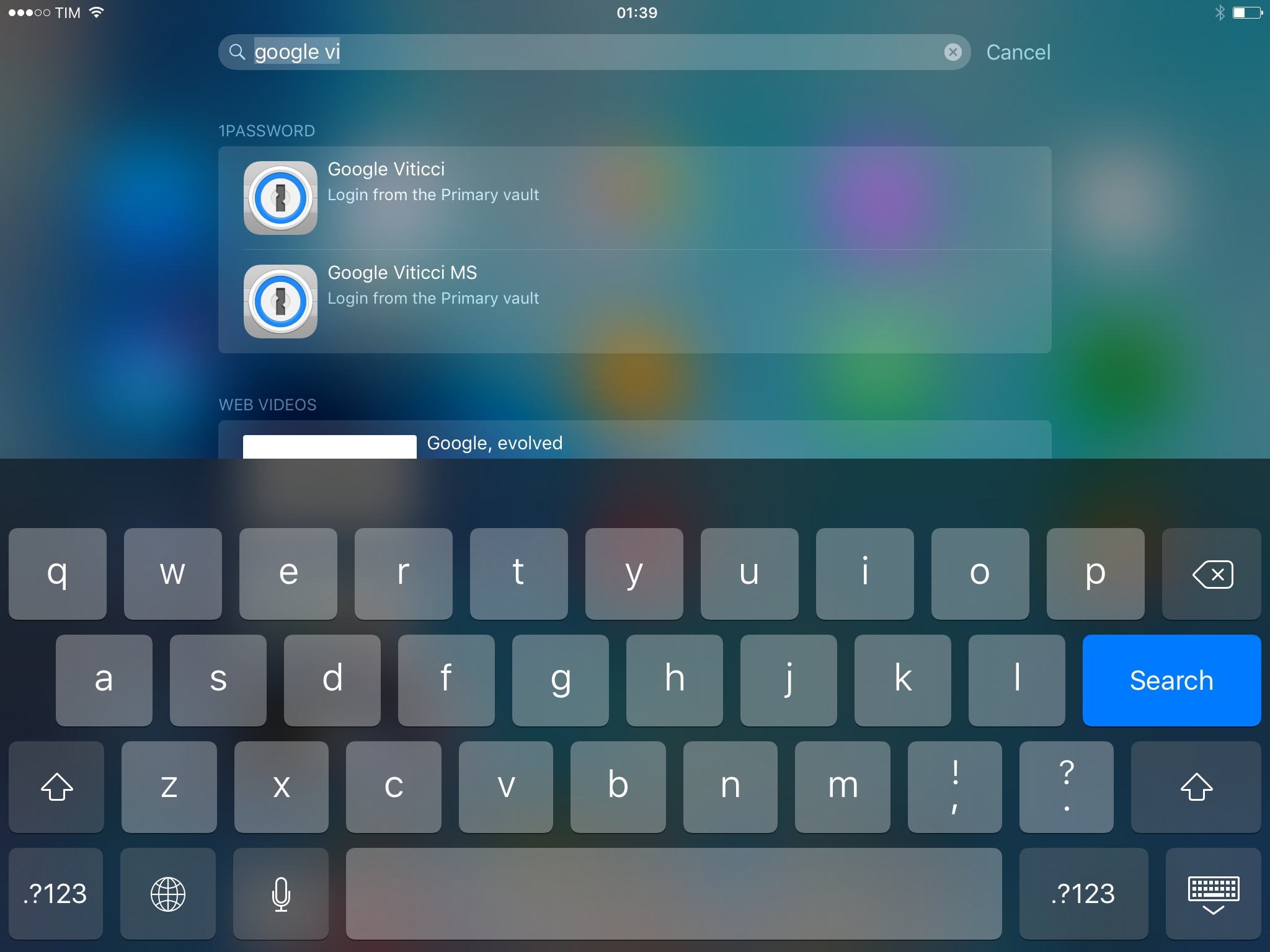 Terrific update to 1Password for iOS released today: version 6.0 adds iPad multitasking support so you can manage your 1Password in other apps, plus a refreshed design, a new Diceware password generator, and Spotlight search.

Besides Slide Over and Split View, I’m excited about the ability to find 1Password items directly from iOS search thanks to CoreSpotlight indexing. Once enabled in Settings > General, 1Password search will let you look up logins, notes, and other items by searching for their title. iOS search will show a 1Password icon for these results, vault information, and it’ll let you tap an item to open it in 1Password.

I search for logins and secure notes in 1Password every day. The ‘Favorites’ shortcut and last year’s action extension helped in getting to often-used items more quickly, but I still do quite a bit of manual search in my vault on a daily basis. Being able to easily search for 1Password content shows why local app search in iOS 9 will change how we navigate and launch apps, and it’s a clever addition by AgileBits.

Released today on the App Store, the latest update to our favorite password manager brings some nice minor adjustments. Most of the changes improve the flow and ease of use of the app, and while there aren’t any game changers here, numerous tiny annoyances that have been frustrating me for a while have been wiped out.

The first feature mentioned in the release notes is the ability to switch between multiple vaults with only two taps using their new vault switcher. I personally only use one vault with 1Password so I don’t have much to say here, but I’m always a fan of doing things in fewer taps so this feature gets a thumbs up from me.

My favorite changes have to do with Touch ID and security tweaks. There have been quite a few times when I’ve accidentally canceled the Touch ID dialogue, and until now that meant that I was then required to type my password back in before the app would unlock. With version 5.5, there is now a very nice looking fingerprint button that will show up beneath the password input box. If you accidentally cancel Touch ID before unlocking the app, you can now tap the fingerprint button to bring the Touch ID prompt back up and unlock without typing. The feature of course still respects your Touch ID timeout settings, so if you’re trying to unlock when Touch ID has been disabled until the next time your password is typed, tapping the fingerprint button won’t do anything.

Next on security, in regard to the 1Password extension, the extension and the main 1Password app now share unlock settings. This means that if you unlock the app, the extension is unlocked, and vice versa. If you, like me, have experienced typing your password into the extension (which should then enable Touch ID) and then going to the main app and discovering that you now need to type the password again, then you’ll be happy about this feature as well. Timeout settings are still respected on the extension as well, also of course.

Another small but appreciated security improvement: if you fill your login credentials on an unsecured website (think http://) when the saved URL for the login is secure (think https://), 1Password will warn you that this is about to happen. This is one of those features that you hope you would never need anyway but if you do it could save you a lot of trouble.

Finally, among some other various and very minor changes, the Apple Watch app has been updated to allow you to see the PIN numbers on your credit card entries. Convenient if you’re into that sort of thing.

Overall, 1Password 5.5 is a solid update. Mostly polish, but polishing shiny things just makes them shinier, and who doesn’t like that? If you don’t have 1Password yet then I’m not sure why you read all of this, but you can find it in the App Store, and you should go buy it right now.

With an update to their iOS app released today, AgileBits has officially introduced 1Password for Apple Watch, which users will be able to install once the Watch launches this month.

On the Watch, 1Password will enable the creation of “bookmarks” to pin important information to the Watch app, where it’ll be easily accessible. From their blog post, an example:

Also interesting: AgileBits made the Apple Watch app a Pro feature, which can be unlocked through 1Password’s $9.99 In-App Purchase. I wonder if more developers will follow this route and try to monetize Watch apps as extra features of iPhone apps with IAPs. 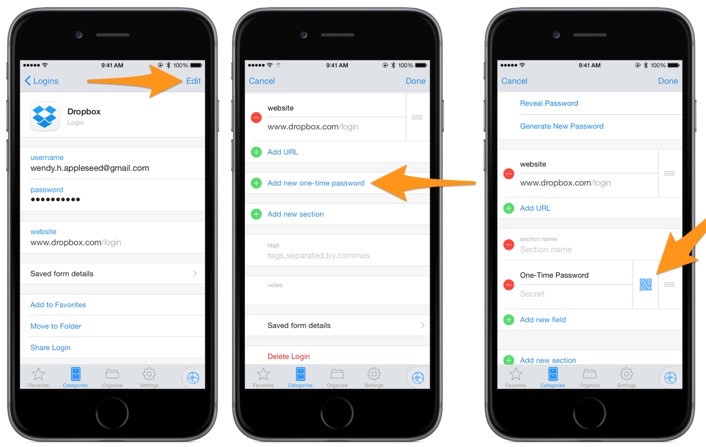 If that describes you, well, then you’re in luck, because I just completed the switch and I’m here to report my results. (Spoiler Alert: it was easier than I expected, and I already like it more than Authy, despite having really liked Authy.) There are a few “tips and tricks” which can makes the transition a little easier.