Pixelmator Photo has long been one of my favorite iPad photo editing apps. The app makes great use of the iPad’s large screen, which provides space for tools alongside the image you’re editing. Reducing that experience to even the largest model of iPhone is a tall order, but from my preliminary testing, it looks as though the Pixelmator team has pulled it off.

Pixelmator Photo on the iPad offers an extensive suite of editing tools that strike a nice balance. The app makes it simple to apply the app’s machine learning-based tools for quick editing and sharing, but it also includes fine-grained controls for when you want to more finely tune a photo. The same is true on the iPhone, but the design tilts in favor of quick access and edits, which I think is appropriate on a device like the iPhone. The deeper tools are still there, just beneath the surface and easy to access when you need them, but on the iPhone the emphasis is on accessing frequently-used tools quickly.

The Pixelmator team says there are over 30 tools in total, and if there are any missing compared to the iPad app, I haven’t found them yet. However, keep in mind that I’ve only had a little more than a day to poke around in Pixelmator Photo on the iPhone, so there may be a few subtle differences.

On the iPhone, it takes one fewer taps to get to Pixelmator Photo’s top-level editing tools. By default, your images are arranged in a grid of squares when you first open the app, which crops part of many images in favor of showing more photos per screen. If you prefer to see your full photos in their original aspect ratio, there’s an option to change to that view behind the three-dot button in the top toolbar. Tap on an image, and the machine learning-based magic wand, healing, and cropping tools are all available in the top toolbar. Along the bottom of the screen, you’ll find a filmstrip of the images in your photo library. If you want to dig deeper into Pixelmator Photo’s editing tools, tap the button in the top toolbar with the sliders. The filmstrip at the bottom will switch to Pixelmator’s presets, and if you swipe up on the presets, the rest of the app’s image adjustment tools that you’d find in the panel on the right on an iPad are revealed in a card-like interface reminiscent of apps like Maps. 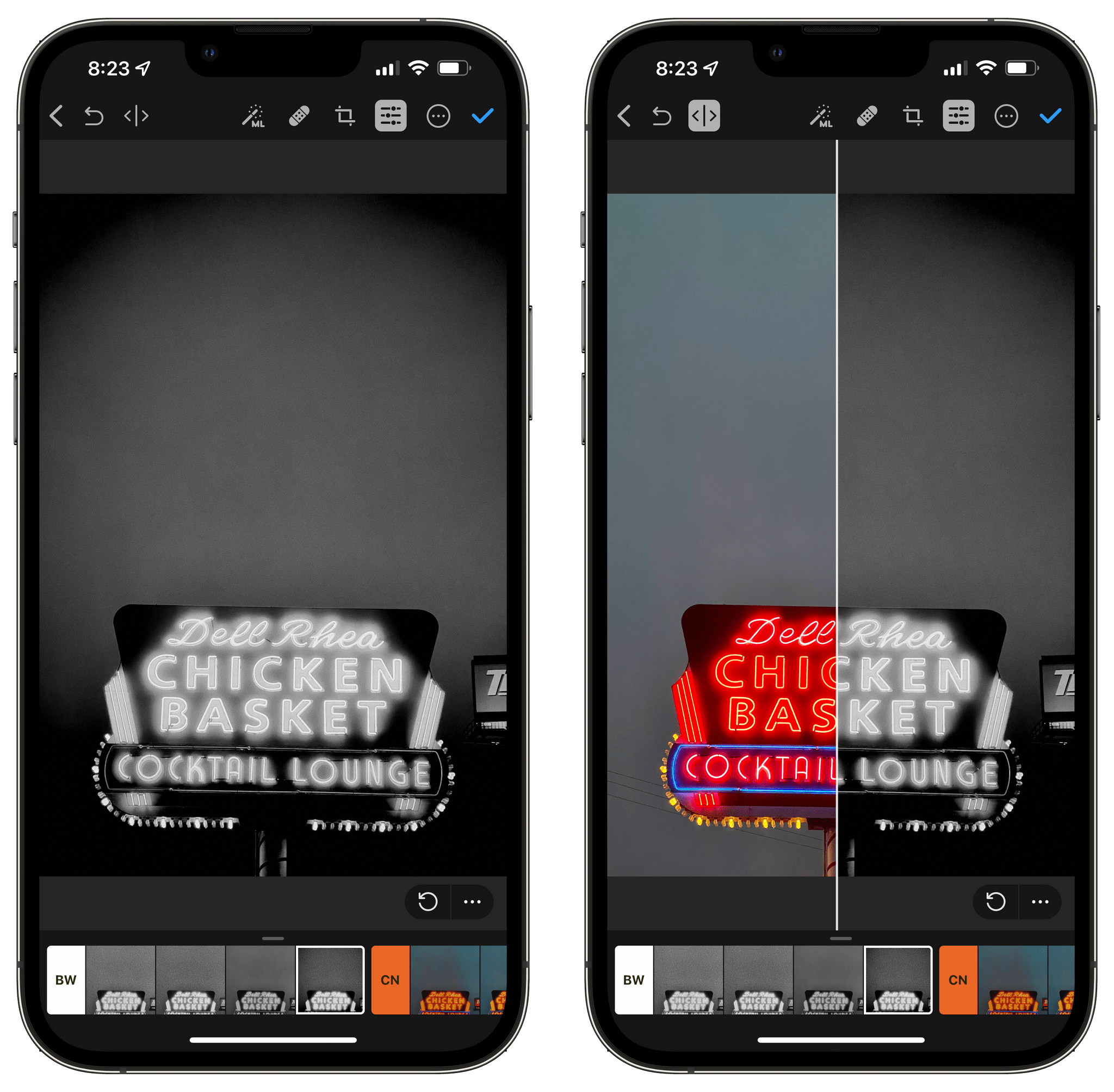 The before-and-after slider is even available on the iPhone, which is I love when I’m considering edits I’ve made. The iPhone version also includes the custom workflow system that allows you to batch edit photos by applying the same set of multiple adjustments to each image. Pixelmator Photo also supports RAW, Apple ProRAW, and its edits are entirely non-destructive.

My time with Pixelmator Photo on the iPhone has been limited, but I got up to speed with it quickly because so much of the app is familiar. Functionality has been moved around to accommodate the smaller screen, but it’s all there. I didn’t have any trouble finding the tools I wanted. It’s an impressive feat to pack so much onto an iPhone. Even more important, though, is the simple fact that Pixelmator Photo is now available on the same device where I take my photos. As much as I appreciate the big screen of an iPad for photo editing, the reality is that a lot of my editing happens on an iPhone. I make some minor adjustments and share an image with someone. That reality significantly reduced the amount I used Pixelmator Photo before. Now, I expect to get a lot more use out of the app.

My only disappointment with Pixelmator Photo is that it hasn’t integrated with Shortcuts. Pixelmator Pro, the Mac app that includes a broader set of image editing and creation tools, added a fantastic set of Shortcuts actions on the Mac this fall. Pixelmator Photo’s custom workflows feature is excellent, but it’s confined to the four corners of the app itself. I’d really like to see some of the same power integrated with Shortcuts where it could be leveraged alongside actions from other apps too.

That said, Pixelmator Photo for the iPhone is a fantastic photo editor. It’s an uncompromised version of the app that greatly increases its utility simply by being available more often. I’m looking forward to spending a lot more time in Pixelmator Photo in the months ahead.

Pixelmator Photo is available as a universal purchase on the iPhone and iPad from the App Store.