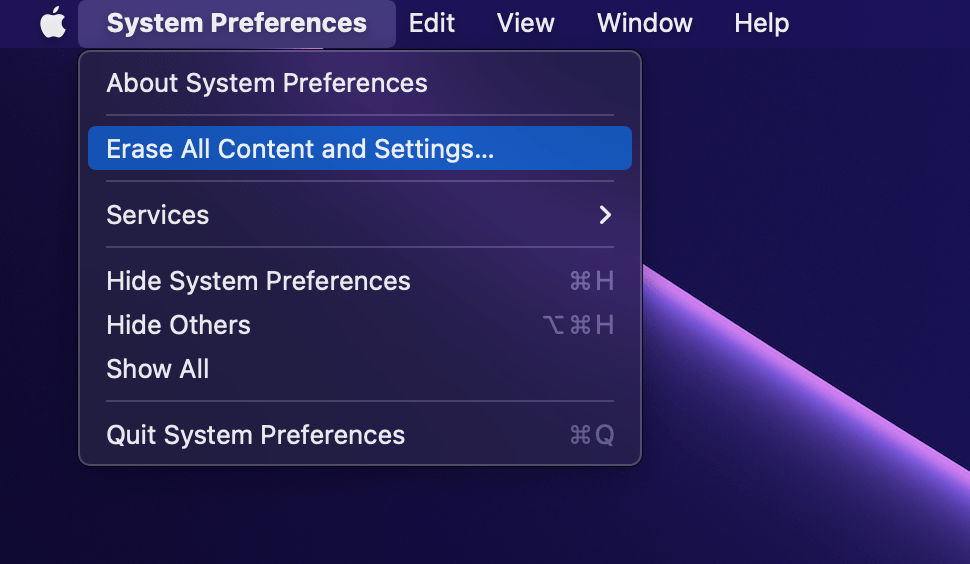 Whenever you sell an iPhone or iPad, it’s easy to erase them, eliminating all of your apps and personal data, leaving only the operating system in place. With Monterey, the equivalent functionality is available on the Mac for the first time. This isn’t the sort of feature you’ll use often, but if you ever want to trade a Mac in to Apple, sell it, or give it to someone else, Erase All Content and Settings, which is available from the System Preferences menu, should provide you with the peace of mind that your old Mac has been wiped clean and in a state where it can be set up as new by someone else.

Mac users have asked for a Low Power Mode for laptops for quite some time, and with Monterey, it’s now available. I’ve been testing Monterey on an iMac, so I don’t have first-hand experience with the battery savings Low Power Mode will provide yet, but Low Power Mode promises to extend how long your Mac laptop can last on a single charge by lowering screen brightness and reducing the CPU’s clock speed. The setting is available in the Battery section of System Preferences. 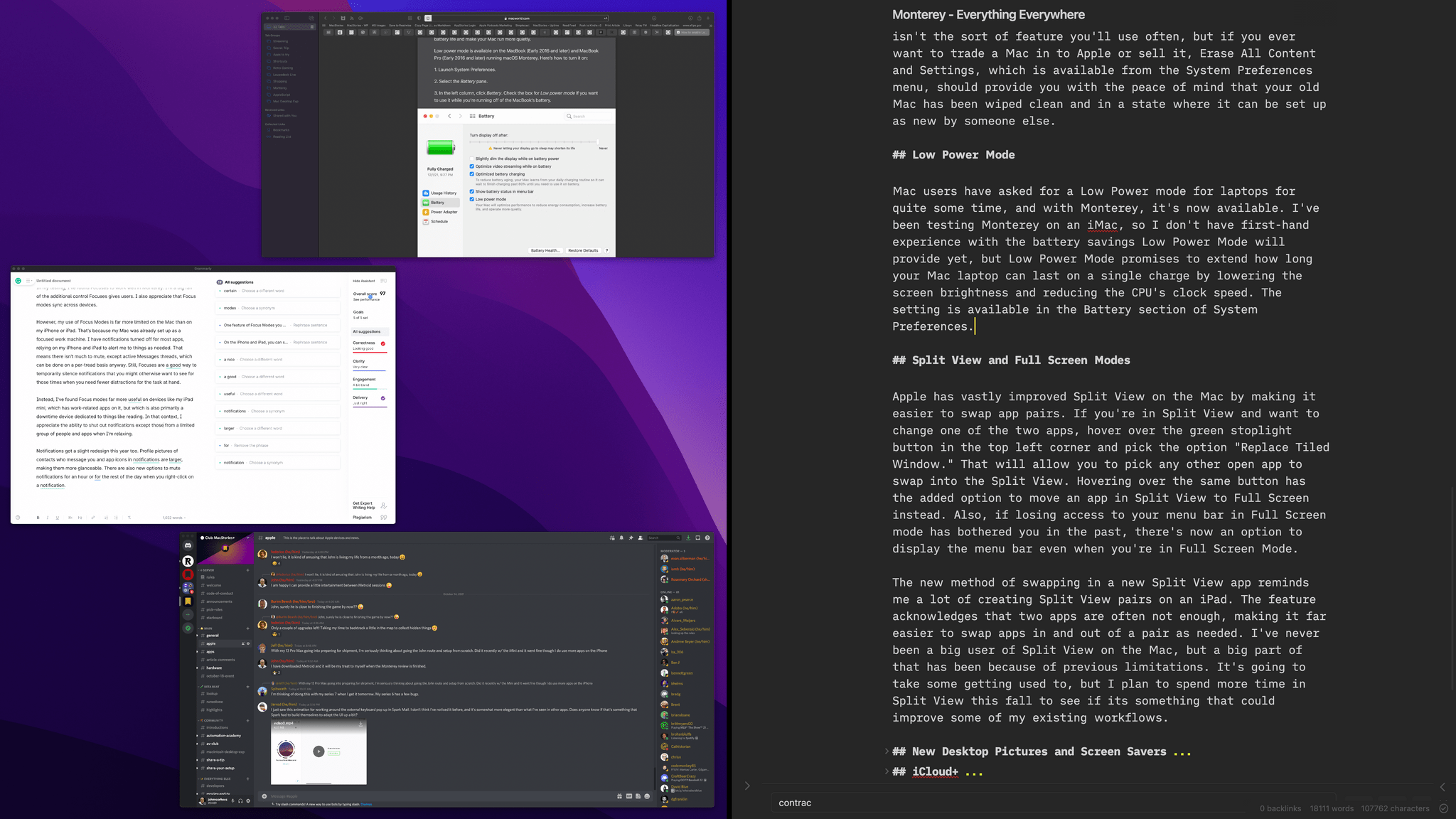 Picking an app to add to the left of a Split View.

Apple has vastly improved Split View on the Mac by making it easier to swap app pairs. If you’re in Split View and want to change one of the two apps, hover over the green stoplight button in the top left corner and pick the option “Replace Tiled Window.” That will allow you to pick any other open app to swap into the Split View. Hovering over the same button has the added option to move an app in Split View to Full Screen instead. Also, if losing access to your menu bar in Full Screen mode has bothered you in the past, there’s now an option to display the menu bar even when you’re in Full Screen Mode, which you’ll find in the Dock & Menu Bar section of System Preferences.

The new method of swapping in a Split View app reminds me of creating Split View pairs on an iPad. The feature acknowledges that two apps are often not enough, making it far easier to swap apps in and out of a pair as needed. I’ve never been a big user of Split View on the Mac, but a big part of that has been because of previous limitations. It’s going to take some getting used to, but I plan to spend more time in Split View this fall to see if it’s something that could improve some of my existing workflows. Every update to macOS brings new Desktop pictures, and this year is no different. This year, the new Desktop picture is a stylized rendition of the Monterey landscape that comes in light and dark modes, as well as a dynamic variant that changes throughout the day. Apple has also made the ‘hello’ screensaver that debuted on the M1 iMac available to all Mac users in Monterey.

iCloud+ is a rebranding of Apple’s iCloud service that adds new HomeKit, security, and privacy features.

The Home app itself hasn’t changed appreciably, but iCloud+ has increased the number of cameras that can be monitored in the app at each service level. Previously, you could use up to five HomeKit cameras with a 2 TB iCloud storage plan. With iCloud+, you can use up to five cameras with the 200 GB plan, an upgrade from that plan’s previous limit of one camera, and the 2 TB plan now works with an unlimited number of cameras. Video footage will continue to be stored for 10 days and doesn’t count against your iCloud storage limit. iCloud+ also adds a VPN-like service to Safari called Private Relay. The new service routes your Safari Internet traffic first through Apple’s servers and then through a third-party partner to obscure your location and the sites you visit making it harder for sites you visit to track you. It differs from a VPN in that a VPN knows the websites you visit, even if the site you’re visiting doesn’t know where you are. With Private Relay, your Internet traffic is routed through Apple and then through a third-party partner. That second hop across the web means neither party has a complete picture of your Internet browsing and location. Also, Private Relay only works with Safari.

To turn on Private Relay, open the Apple ID section of the System Preferences app and select the checkbox for Private Relay. If you click the Options button, you can choose to maintain your general geographic location, which is the default and makes some websites easier and more accurate to use. The other option is to maintain your country and time zone only. If you need to look up the address you used for a particular service, you can do that in System Preferences, which shows every burner email address you’ve used and the service it’s associated with. The list you’ll see on first-run may already have email addresses in it even if you’ve only recently upgraded because those are addresses generated by the existing Sign in with Apple service. You can copy the address, turn off forwarding to your iCloud email, and if you click the Manage Settings button, you can even revoke a service’s access to your Apple ID.

I’ve used Hide My Email several times over the summer when signing up for accounts with restaurants, and ordering items from some websites and it’s worked well. The only issue I had was when I contacted someone about a problem one time, and they went looking for my account and didn’t find an email address that used my name, but that’s arguably the point of the feature and something you’ll just have to keep in mind. Apple’s support for managing passwords continues to improve every year. With macOS Monterey, Passwords has its own section in System Preferences, which makes sense given that Passwords is a section of the Settings app on iOS and iPadOS too. If you’ve used the Passwords tab of Safari’s preferences, you’ll be right at home with the new System Preferences section because they’re identical, with a list of passwords on the left and details about each on the right. As with Safari, you’ll also be told if you have any passwords that need attention because they’re easily guessable, there have been security breaches, or other issues are detected. 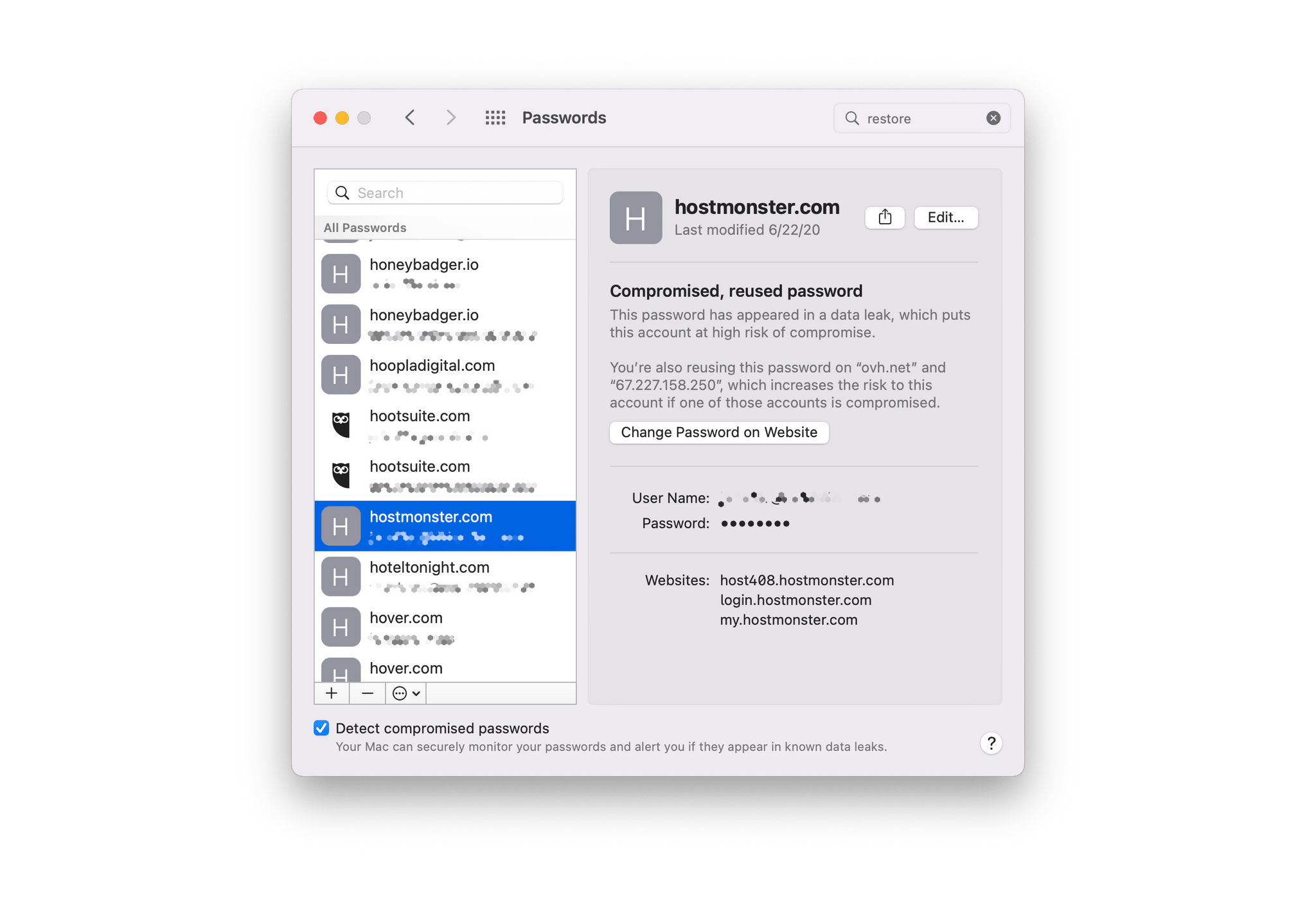 Passwords also supports code generation for two-factor authentication systems. What’s more, codes work with AutoFill to generate and fill in the codes, making the process of using two-factor authentication easier than before. If you’re switching from another password management app to Monterey’s built-in system, it handles importing of passwords. Likewise, passwords can be exported to a third-party app. Both importing and exporting passwords can be accessed from the ‘more’ buton at the bottom of your list of passwords in the Passwords section of System Preferences or Safari’s Preferences. If you use Windows, Apple has introduced an iCloud Passwords app that lets you access your passwords and integrates with Microsoft’s Edge browser with an extension. An extension is also available for Google’s Chrome browser. 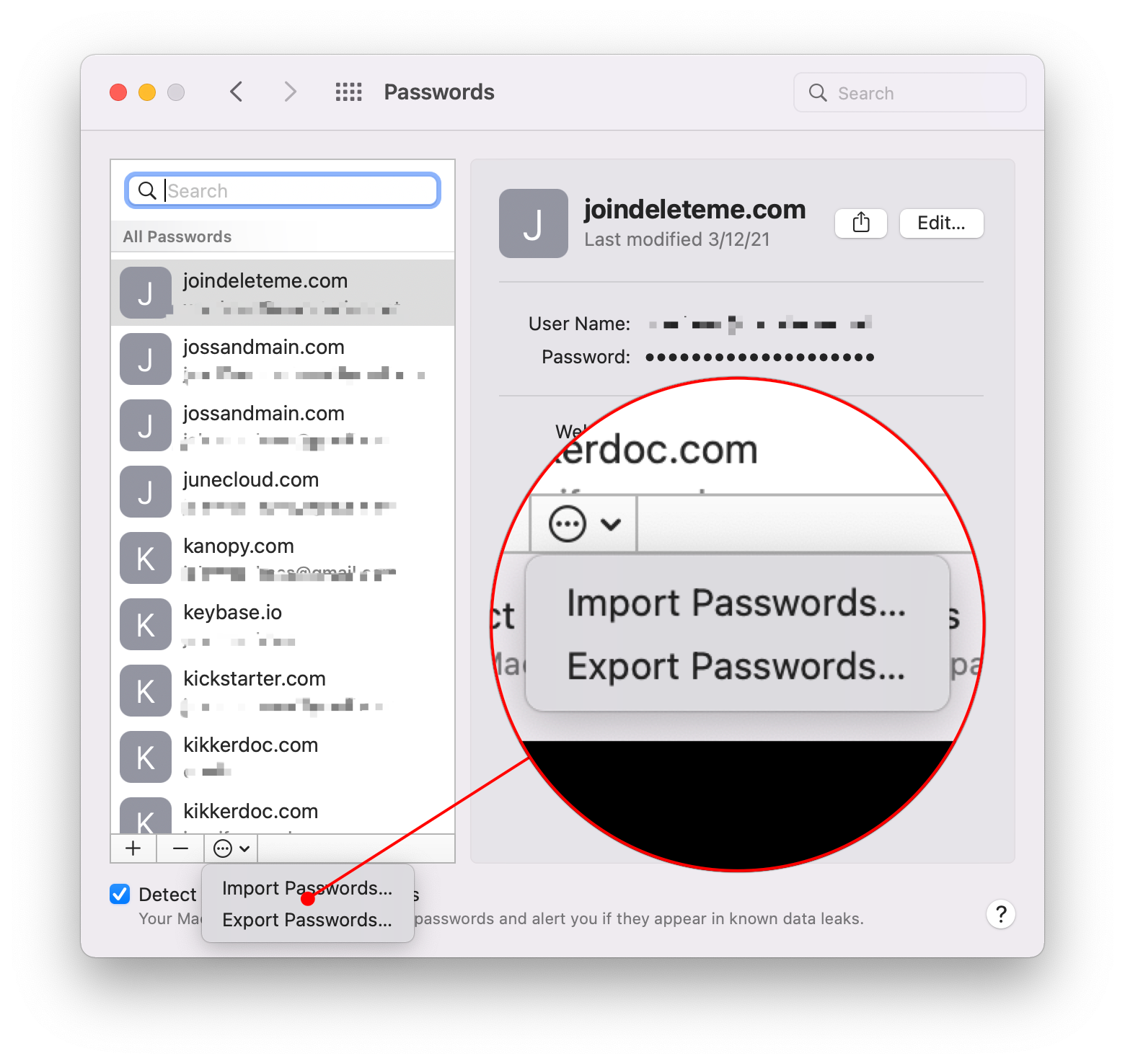 Importing and exporting passwords is possible from the Passwords section of System Preferences or Safari’s Preferences.

Finally, Apple is introducing a couple of other security and privacy updates to macOS apart from the new iCloud+ features. The first is that Intelligent Tracking Prevention precludes known trackers from viewing your IP address. Also, if you use an http:// address for a site that is known to support https://, Apple will automatically send you to the https:// version of the site. An Account Recovery Contact can be added to your Apple ID now to help you get back into your account if you get locked out. Apple is also in the process of creating a Digital Legacy program that will give your heirs access to digital assets associated with your Apple ID, but it’s not available yet. 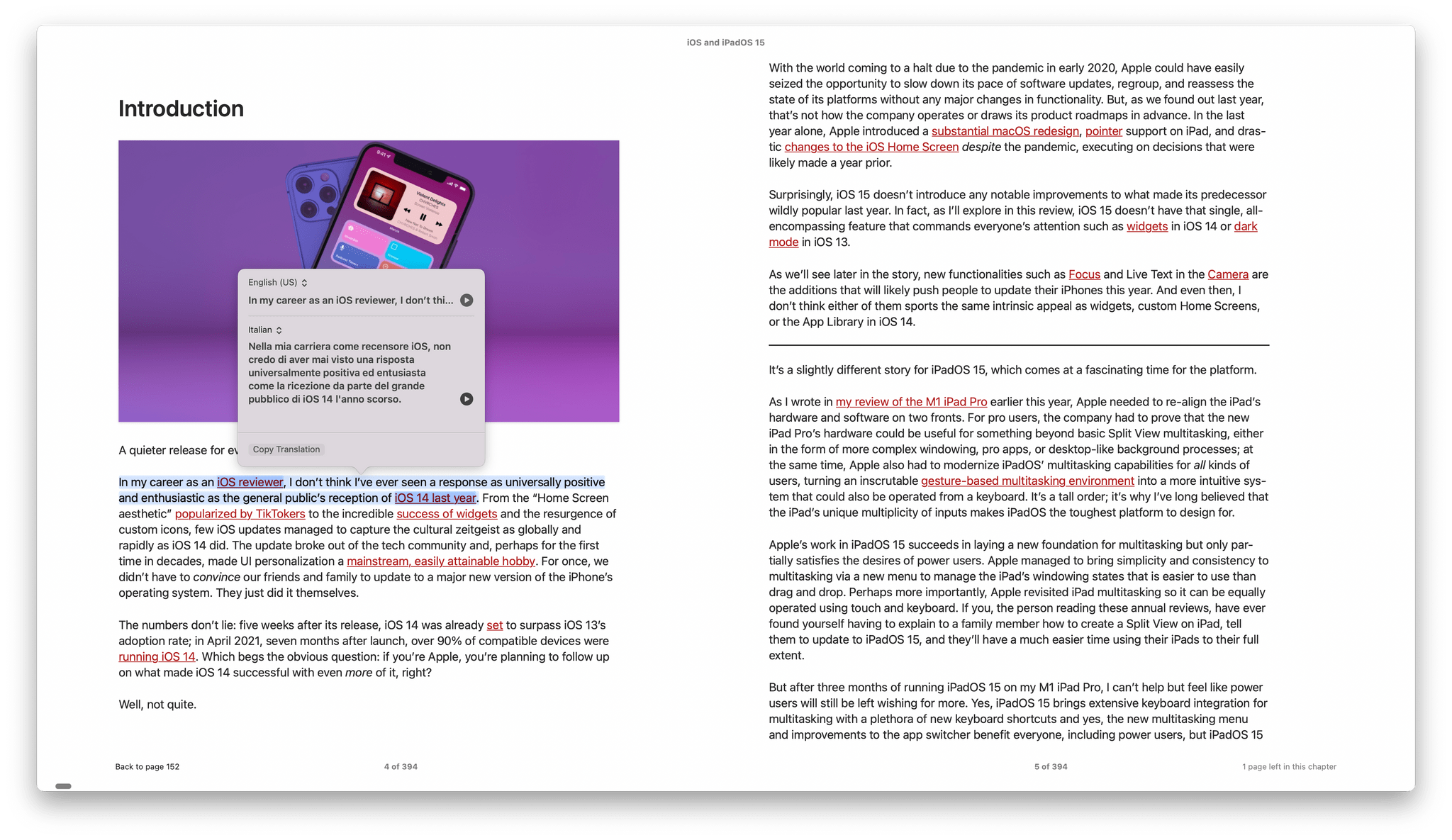 Translating the introduction of Federico’s iOS and iPadOS 15 review into Italian in Books.

Monterey’s translation functionality isn’t a separate app like it is on iOS or iPadOS. Instead, it’s built into the operating system.

To translate text, simply highlight it, right-click, and pick Translate. The first time you use the feature, you’ll be warned that your text will be uploaded to Apple for translation. However, if you prefer, you can visit the Language & Region section of System Preferences and download a language, so the translation can happen locally.

From the popup that appears when you invoke the Translate feature, you can play audio of the selected text in the language in which it’s written or the language to which you are translating it. There’s also an option to copy the translated text, which you can then paste into any app that accepts text.

Adding a text description to a screenshot using Markup.

Markup is one of my favorite macOS features for quickly editing an image and sharing it. With Monterey, Markup can add text to images that can be read aloud by Apple’s VoiceOver framework. Descriptions can be added to signatures on PDFs too.

As with iOS, Apple has also included new accessibility features to Memoji, adding customizations like a soft helmet to headware, cochlear implants, and oxygen tubes. Accessibility has also been improved with: There are a lot of other small changes in Monterey too. For gamers, there’s a new Games folder in Launchpad, the ability to capture 15 seconds of gameplay using an Xbox or PlayStation controller, new ways to connect with your friends in Game Center, and support for adaptive-sync displays.

If you use an M1 Mac, there is no longer a limitation on how long you can dictate a message.

There are also many more ways to customize your Memoji this year, many of which Federico showed off in his iOS and iPadOS 15 review.

Separate from updates to developer tools like Xcode, Monterey adds features that developers should appreciate. The first is the ability for third-party virtualization apps like Parallels to run up to two instances of macOS on M1 Macs.