With iOS 5, Apple is officially acknowledging the existence of external social networks besides Ping and Apple ID (one of the authentication options for iOS 5’s iMessage) and the result is direct Twitter support, unveiled after much speculation at the WWDC in June, and now available inside Apple’s Settings app. Twitter integration in iOS 5, however, goes beyond a couple of preferences and options to tweak – it’s a systemwide framework that will allow developers to build “official” Twitter support in their apps, as well as let users forget about having to log in with Twitter every time they want to try a new Twitter app.

Twitter is expecting a massive growth in the upcoming months thanks to integration with Apple’s devices, and rightfully so: with the new Twitter preference panel available in iOS 5’s Settings, users are able to sign in once with their Twitter account, and use that “single sign-on” to authorize other apps downloaded from the App Store to access their Twitter credentials. With this method, not only is Apple giving users support for Twitter at a system level, they’re also leveraging iOS technologies to make the experience of downloading and configuring Twitter apps (admittedly, quite many) as frictionless as possible.

Here’s how it works. You can log in with multiple accounts in Twitter’s settings, or create a new one directly from your iPhone, iPad, and iPod touch. Twitter is fairly popular nowadays, but there’s no doubt Apple’s “Create Account” button will give Twitter some additional signups from people curious to try the service for the first time. The “New Account” screen doesn’t take you to a web view as most third-party Twitter apps have done until today – it’s completely integrated with iOS and it’ll ask you for a name, email, user name, and password before signing up. This screen contains two options to let people “find you by email” and “tweet your location” – the latter will prove useful in the new iOS 5 tweet sheet, but more on this in a bit. 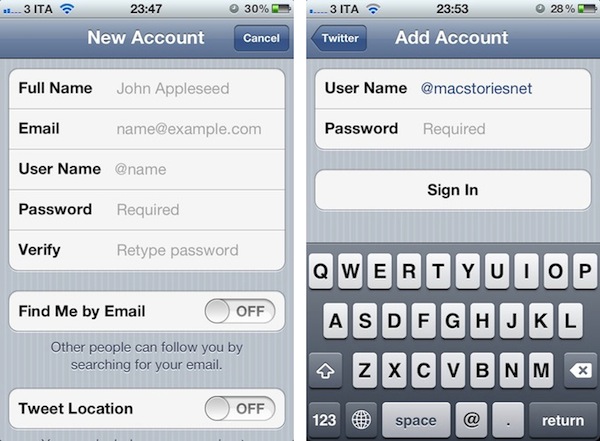 If you want to add an existing Twitter account, iOS 5 will ask for your user name and password. Tapping on the user name field will immediately reveal two interesting details: the @ character being automatically filled in, and the iOS keyboard including the @ sign as well. Once you log in with an account, iOS will jump back to Twitter’s main settings page, which lists all your available accounts and connected apps, checks if the official Twitter app is installed, and has a button to “update your contacts”. If the official Twitter app isn’t installed, iOS 5 will ask if you want to get it. Tapping on “Install” won’t take you to the App Store though, as iOS 5 will automatically start loading the app on your Home screen. Twitter for iOS was updated yesterday with full iOS 5 Twitter integration. 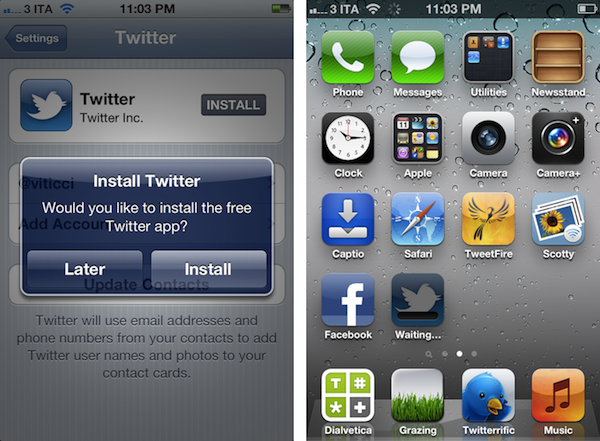 Because Twitter is integrated systemwide, it means the service gets access to native iOS functionalities that would require a manual configuration otherwise. Take Address Book for example: Twitter will use email addresses and phone numbers from your contacts to match them with your followers, and see if it can automatically add user names and photos for people found in your Address Book. All you have to do is hit the Update Contacts button, and hope that your Twitter contacts are using the same info you have in Address Book.

In the lower section of the screen, iOS 5 lists apps allowed to use your Twitter account. Which brings me to the most important change this Twitter integration will bring for developers – any iOS 5 app can take advantage of Twitter’s framework and request access to your credentials to tweet photos, status updates, your location, and more. As usual, Apple is setting a standard with its own apps: in this initial release of iOS 5, Safari, Photos, Camera, YouTube and Maps have been updated to support the Twitter framework and they come with a new Tweet option in their sharing menus. The implementation of the “tweet” action is slightly different across these five apps, but it’s based on the same graphical element that Apple calls the “tweet sheet” – a new sharing popup that apps can invoke to let you send a tweet.

In Safari, you can hit the Tweet button to share a webpage with your followers. As the browser’s tweet sheet appears, you’ll notice that you can switch between multiple accounts, add your location, and check out how many characters you have left from the counter in the bottom right corner. There’s more: a webpage is automatically attached as a link (though it looks like a thumbnail image), shortened through Twitter’s native t.co wrapper, and the standard iOS keyboard has received two new keys to facilitate Twitter usage – @ and #. You’ll have to manually type #hashtags, but Apple has implemented @username autocompletion so you’ll be able to pick people you’re following from a contact list inside the tweet sheet. 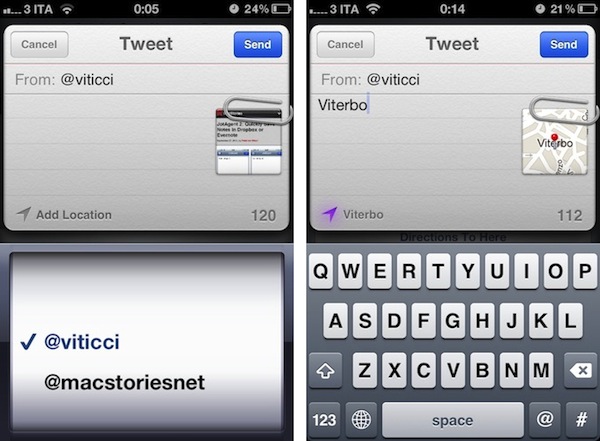 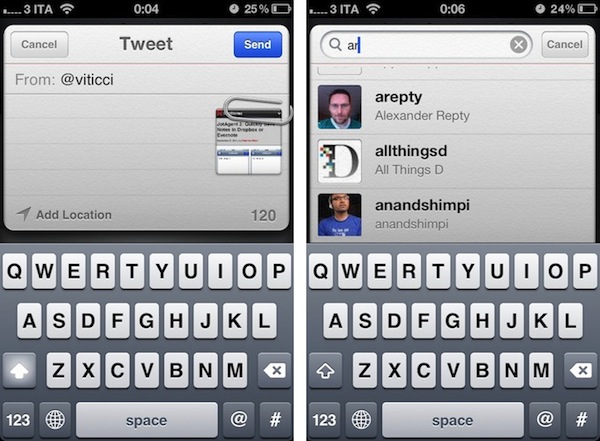 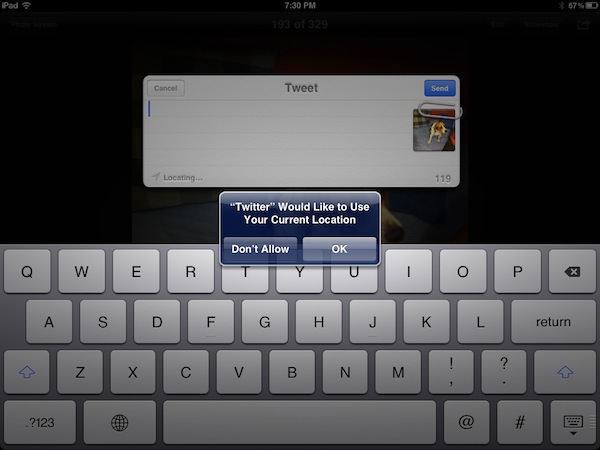 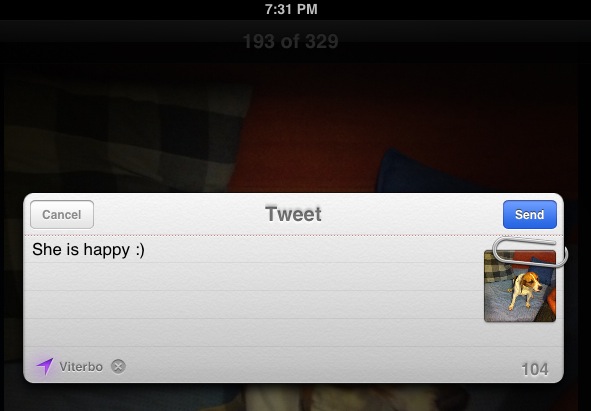 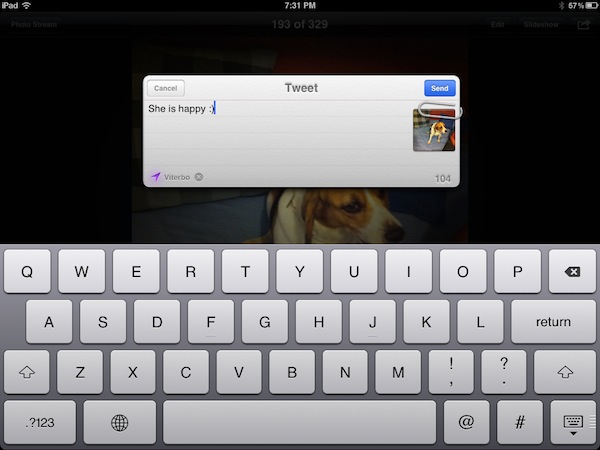 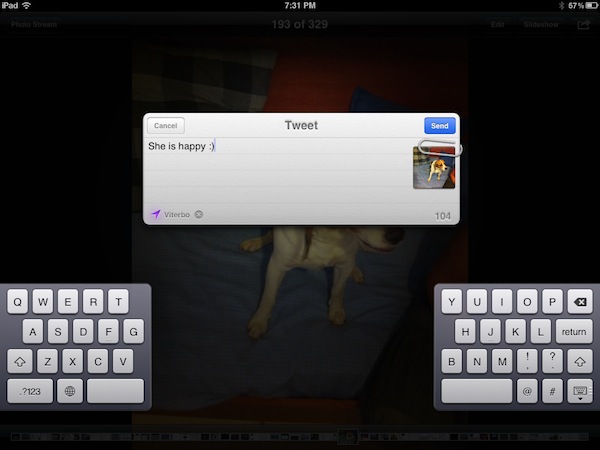 The tweet sheet looks pretty much the same across iOS devices – the iPad version is obviously larger and centered in the middle of the screen. One thing I’ve noticed with the custom Twitter keyboard on the iPhone is that because of the new tweet keys, sometimes I miss the virtual space bar. 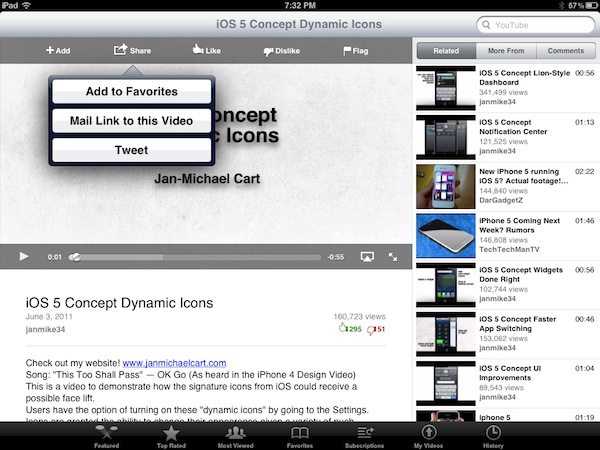 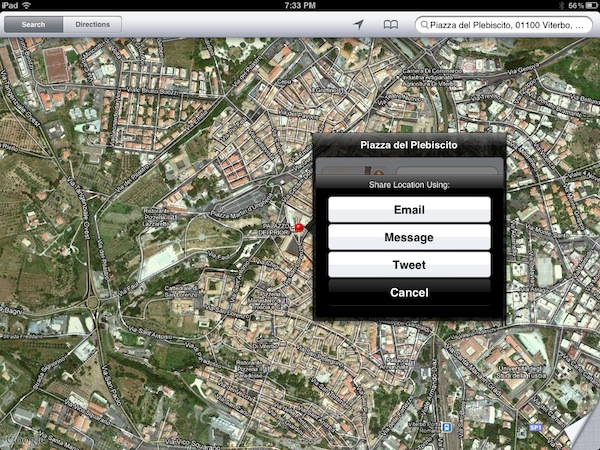 On YouTube and Maps, the behavior of the tweet sheet is similar to Safari. The YouTube app’s standard controls have been updated to include a new “tweet” option, and the app will tweet a link back to the video as you’d expect from a web view wrapped inside a native app. Maps embeds Twitter integration in a location’s info screen – you’ll have to pick a location, open its detail view and choose Share Location->Tweet for the tweet sheet to appear. Here, Twitter will automatically fetch your location (as Maps should be configured to do so) and fill the compose window with the name of the location you selected in Maps. A link to Google Maps will be included in the tweet.

Last, photos. Apple has been granted access to Twitter’s new photo sharing service, which means iOS 5’s tweet menu won’t require you to upload photos to external services like Twitpic or Yfrog – it’ll directly take a photo from your Camera or Photos app, insert it in a tweet as an attachment, and upload it to Twitter’s pic.twitter.com service. Photos shared by iOS and uploaded to Twitter’s official photo service should be previewed inline on the web and most third-party Twitter clients (like Tweetbot and Twitterrific).

The important thing to understand about iOS 5’s Twitter support is that Apple isn’t offering a Twitter client itself. Apple is bringing social features to iOS with support for one-way tweeting in its core apps, and it’s giving developers the tools and APIs to connect their applications with Twitter. In its current implementation, Apple isn’t offering a way to “view” tweets, read your mentions or DMs, or even perform a basic Twitter search. Perhaps future versions of iOS will support these functionalities – and I sure hope so – but that’s not today. Right now, the interesting change is on the developers’ side, thanks to the Twitter framework and single sign-on.

I’ve been testing a couple of apps rewritten with Twitter’s new framework ahead of iOS 5’s public release, and it’s amazing to see how a rather simple change (sign in once) can affect the overall user experience. For one, apps can access the tweet sheet and have a Twitter sharing menu that’s consistent across the system, which will make users feel comfortable with sharing links, photos, and more. Second, apps can fetch your existing Twitter credentials from the Settings app, meaning that you can now import a Twitter account with one tap and you won’t have to see Twitter’s awful login web view ever again. Alternatively, apps that have Twitter accounts that haven’t been configured in iOS can “migrate” those accounts to Apple’s Settings app.

Surprisingly enough, Apple doesn’t provide a systemwide shortcut for sending a “regular” tweet that doesn’t include a photo or a link. I bet third-party developers won’t take long to create a simple Twitter app now that they have full tweet sheet access.

Twitter integration may look like a small change at first, but it signals a major shift in Apple’s iOS towards a more connected and intuitive operating system, fully integrated with web services and open for developers to create new apps. Twitter support in iOS 5 is a win for Apple, Twitter, developers and, ultimately, the user.