Besides new actions, there’s a variety of other user-facing and developer-related improvements in Shortcuts for iOS 16 worth covering.

You can now create notes with rich text. This is a big one if you’re a heavy user of the Notes app and Shortcuts. In iOS 16, actions to create notes and append text to them are no longer limited to plain text. You can now append rich text and attachments to Notes, which will keep your formatting intact whether you’re saving rich text from a webpage or, say, passing some Markdown to Notes that you want to convert to rich text. It’s still impossible to save native rich links or checklist items via Shortcuts, but support for rich text (which is also one of the new supported input types in the Shortcuts app this year) is a solid improvement from iOS 15. 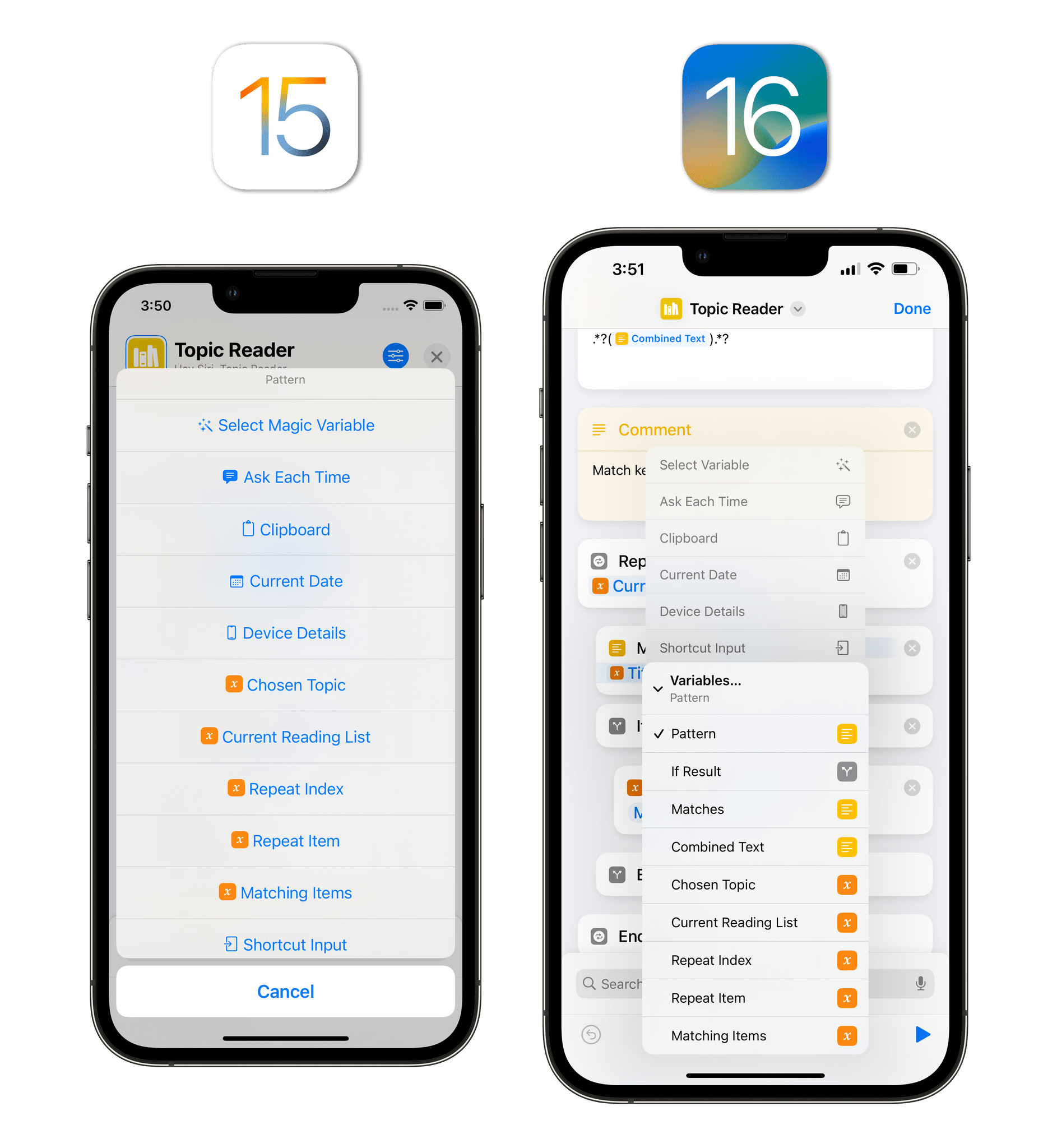 The new variable picker is a native pull-down menu that also supports sub-menus.

The best part, however, is that the variable picker now suggests magic variables that you can insert in empty parameters based on actions that precede the selected one in the editor. In my experience, this has turned out to be a great enhancement to the process of building advanced shortcuts in the app. Instead of having to manually pick a magic variable every time, I typically see the variable I want to use right there in the picker, where I can select it and use it as a parameter in an action. The old magic variable picker is still around, and of course you can still assign variables manually, but I’m using suggested variables in the picker more and more these days.

There’s a new document menu. I’ll talk about this more in depth next month with my coverage of the Files app in the iPadOS review, but Shortcuts is one of the apps that has received the new document menu in iOS and iPadOS 16 this year. This menu is accessed by tapping a shortcut’s name at the top of the editor; it contains options to rename, share, duplicate and move, export a shortcut as a file, or add it to the Home Screen. 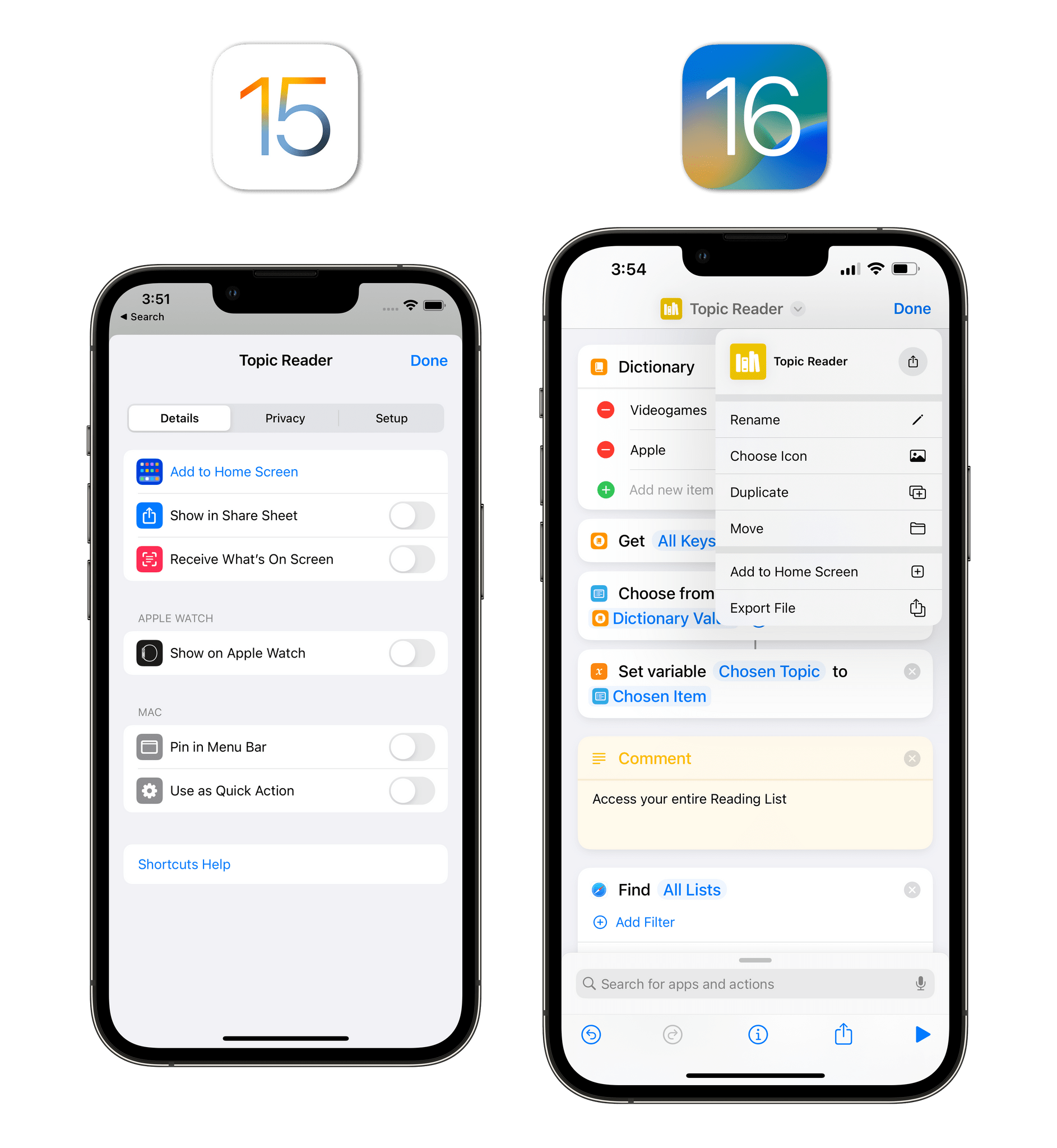 The new shortcut menu in iOS 16.

This menu is a new system-wide element in iOS 16, which you can also see in Files and other document-based apps. In Shortcuts, it serves as a centralized location for options that continue to be available elsewhere (such as adding to the Home Screen, sharing, or exporting to a file) or that used to be nested inside sub-menus before. I like it, but in adopting it, users have lost the ability to instantly rename shortcuts by clicking the title bar once.

You can now search for shortcut icons. Speaking of the new document menu, it now also comes with the ability to search for symbols you want to use as icons for your shortcuts. Although there aren’t any new colors or symbols you can use in iOS 16, you can at least search for them by name now, so that’s nice. Actions are now broken down into categories. As you start using the updated Shortcuts app for iOS 16, you’ll notice that actions from apps are now organized in categories. This is a welcome change that third-party developers can also take advantage of with their apps. Rather than having to find an action in a long list of unsorted items, you can now browse, say, Safari actions by category such as ‘Tab Groups’ or ‘Reading List’, which makes the process of building custom shortcuts faster and more intuitive. It’s another good change to make the app more approachable for a wider audience.

Actions for apps are easier to browse and discover in iOS 16.

Predicate filtering comes to third-party ‘Find’ actions too. I covered this on AppStories a few weeks ago, and this developer-related change is one of my favorite improvements to Shortcuts actions this year.

In iOS 16, developers can create ‘Find’ actions to retrieve content from their apps using the same predicate filtering technology that Apple has been using in its actions for years. You may not be familiar with the idea of “predicate-based filtering”, but you’ve probably seen and used these actions before: it refers to the ability to find content using natural language-like filters such as ‘Name is…’ or ‘Text contains…’ and so forth, stacking those filters together in a complex query. Actions such as ‘Find Reminders’, ‘Find Photos’, and ‘Find Calendar Events’ have used this system for years. Until today, third-party developers could create actions to find and filter content from their apps, but they couldn’t use the same predicate-based filtering that Apple offered in its actions. This is changing with iOS 16, and it’s going to make ‘Find’ actions for third-party actions a lot more flexible…if developers adopt them. Fortunately, I’ve already seen some fantastic examples of these actions in use: apps like GoodLinks, GameTrack, and Book Track have all adopted this more flexible style of filtering, and there are more apps on the way with support for it, such as Things. 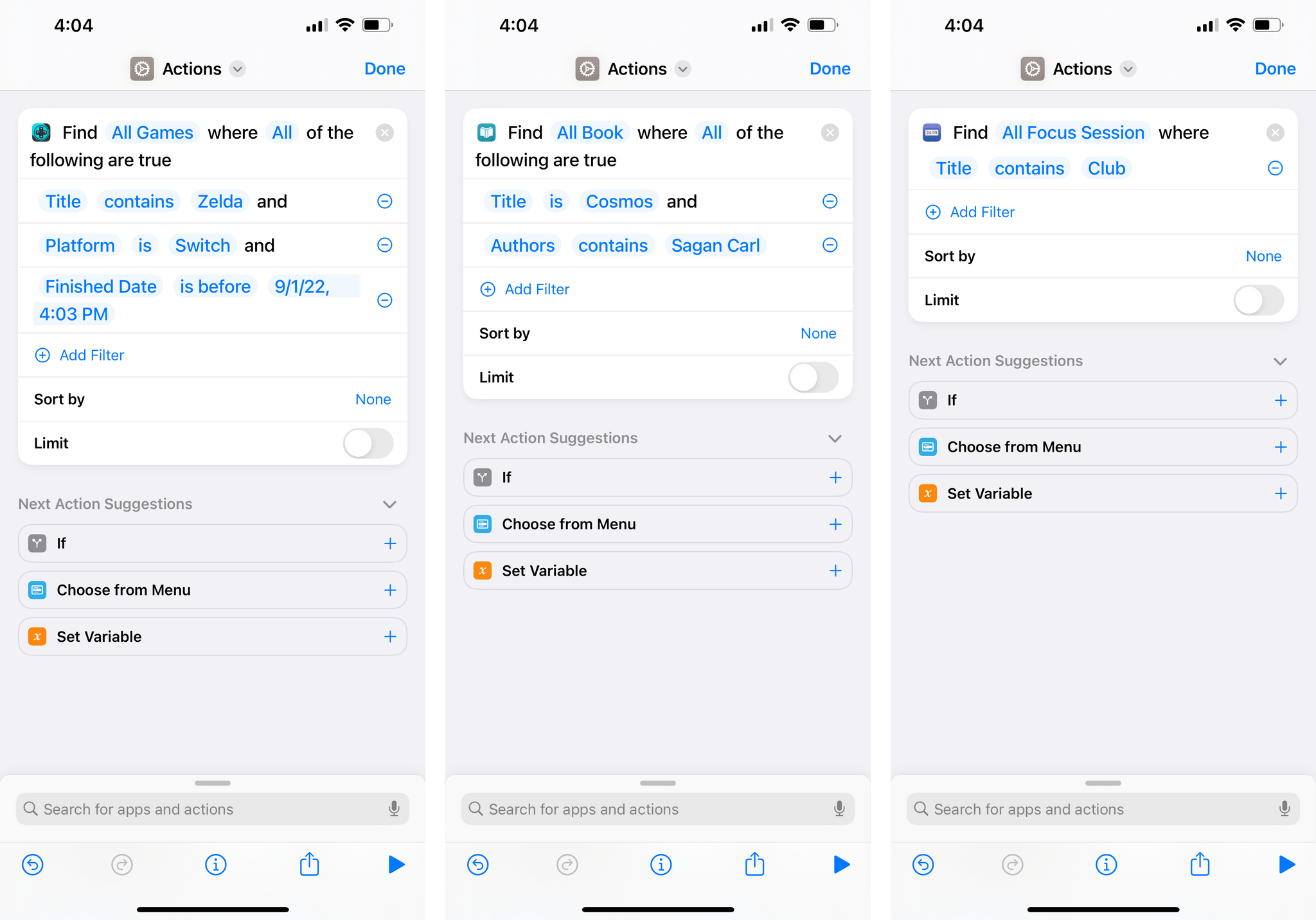 The same action – finding a link in GoodLinks – becomes much more flexible in iOS 16 thanks to predicate filtering.

With predicate-based filtering, developers won’t have to make actions with a predefined set of filters anymore, and you’ll be able to choose how many filters you want to mix and match as well as decide whether you want to filter by all or any conditions being true. This addition to the Shortcuts framework may have flown under the radar, but I hope more developers adopt it soon.

Faster, redesigned, and more interactive prompts. Lastly, we need to cover the new look for Shortcuts prompts generated by privacy permission prompts and actions such as Show Result, Ask for Input, and Show Alert. They’re bigger, have larger confirmation buttons with actual color in them, text fields are easier to see and click into, and – the best part – they come up onscreen much faster than before. The latter point is part of a general performance improvement in Shortcuts this year (yes, Shortcuts feels snappier), but it’s most apparent in how quickly prompts and alerts are displayed compared to iOS 15. The new look for Shortcuts prompts in iOS 16. They’re also faster and no longer block interactions with apps.

The enhancements don’t stop at visuals, though. In iOS 16, all kinds of prompts displayed by the Shortcuts app no longer disappear if you move between apps. Lists and alerts stay pinned onscreen if you switch apps now, which means you can multitask and change your context while a shortcut is running. This is a fantastic change for Shortcuts users: it enables you to do things like double-checking a photo in greater detail before picking it, or switching to Safari, grabbing some text from a webpage, and dropping it into an Ask for Input field.

Shortcuts prompts are faster and no longer block interactions with apps.Replay

I haven’t been able to test this myself since Apple still hasn’t made new actions to design more complex interfaces in Shortcuts, but, in theory, results snippets for apps (the alerts you see when you have ‘Show When Run’ enabled in an action) now support multiple tappable links in them too. Once again, in theory, this means apps could show you a notification-like banner that behaves like a medium-size widget with multiple buttons contained in it that you can tap to launch stuff. I haven’t seen any practical examples of this new kind of prompts yet, but I’m excited for somebody to figure out what to do with them.

As I’ll explore next month in my iPadOS 16 review, I’m concerned about the lack of system-level enhancements in Shortcuts this year, and I’m not alone. While I think Apple has done a remarkable job in understanding how to attract new users to the app this year, they haven’t balanced that with new functionalities for existing, advanced users of the app who have built complex workflows around it over the years.

As a power user, it feels like we’ve been stuck doing the same things over and over in Shortcuts for the past couple of years.

As a power user, it feels like we’ve been stuck doing the same things over and over in Shortcuts for the past couple of years. I don’t think I need to repeat what the app needs again, but suffice to say, some new Notes actions aren’t enough. My biggest concern is that Shortcuts is at risk of an identity crisis – an app that may continue to be not intuitive enough for new users, and not advanced enough for power users. I hope to be proven wrong.