As I noted above, one of the threads in Shortcuts this year is that Apple hasn’t focused on adding new system-level actions; instead, they’ve expanded the list of actions for some of their built-in apps, with a particular attention to actions that change settings or open specific views of those apps. The ability to tweak app settings from Shortcuts is a potentially interesting new trend, and one worth keeping an eye on in the future.

The lack of system-level enhancements this year hurts the Shortcuts power-user community for a couple reasons.

First, I think it’s about time for personal automations to go beyond the usual set of triggers offered by Apple; there should be a developer API for third-party triggers in Shortcuts automations, and that’s not here this year either.

Second, the lack of new system actions feels like a missed opportunity on iPadOS. As we’ll see next month, Shortcuts’ support for multitasking-related actions on iPad continues to be largely non-existent, despite the addition of a brand new multitasking mode this year. It’s the same issue over and over again.

That being said, let’s take a look at these new actions provided by Apple in iOS 16. Notes has seen a major expansion of the actions offered to users, with the inclusion of new actions to manage tags and folders, tagging and moving notes, and even the ability to change specific settings of the Notes app from Shortcuts. The settings you can change include app-wide options such as resuming the last used quick note or toggling Notes’ automatic conversion of tags. While I don’t plan to use these new actions myself, I can see how they’d come in handy when combined with automations that tweak Notes’ behavior based on time of day or your location. Unfortunately, the ‘Open Note’ action still doesn’t support opening a note directly if it was passed from a ‘Find Notes’ action; the ‘Find Notes’ action still doesn’t support searching inside the Quick Notes folder either.

Next up is Voice Memos, which has gained a whole suite of actions to create recordings, manage them, search and open them in the Voice Memos app, and, once again, change settings from Shortcuts. 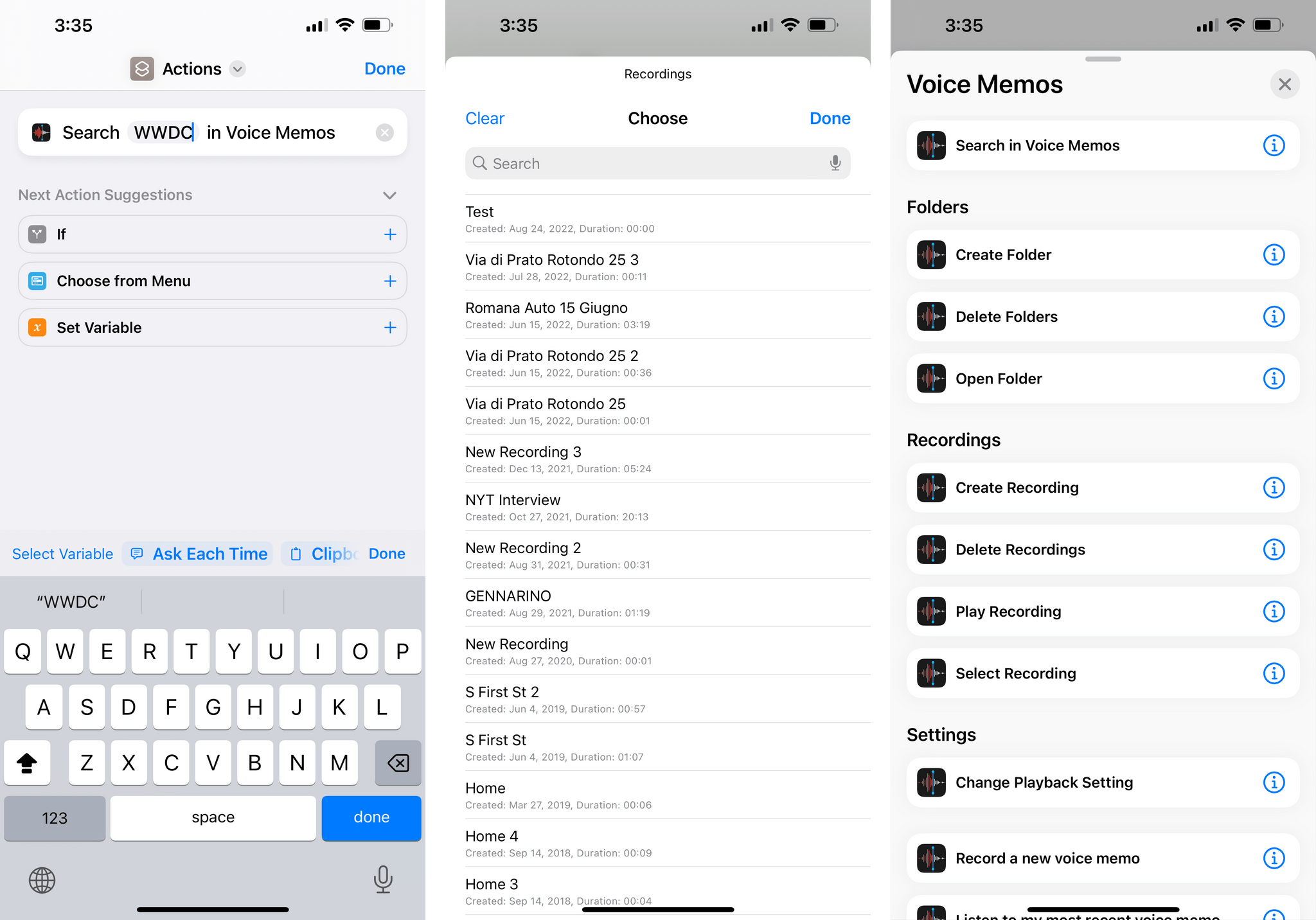 An interesting limitation here is that, unlike the existing ‘Shazam It’ action, Apple hasn’t designed a special Voice Memos UI to create audio recordings inline via the microphone in Shortcuts. Actions to create recordings or listen to them will always kick you back to the Voice Memos app, and I would have liked to see a deeper integration with Shortcuts for the audio experience. An aspect I do like (which you can see in the screenshots above) is the ability to pick specific recordings from the Voice Memos app via the redesigned variable picker in Shortcuts.

The system app with the biggest expansion of actions in Shortcuts for iOS 16 is Safari. Following last year’s controversial (and ultimately satisfying) update, the Safari team seems to have focused on greatly increasing the app’s automation capabilities for this year’s OS updates, and the results are terrific. Take a look at this list of actions: As you can see, there are actions to create and open tab groups, launch Safari into specific views, and brand new actions to find items in Safari regardless of whether they’re bookmarks, Reading List items, tabs, or tabs in a group. My two favorite additions are the Open View and Find actions. With the first one you can launch Safari into any of its different UI modes. For instance, you can use this action to launch Safari and open the tab overview UI, or create a launcher for Reading List, or just toggle the sidebar. A simple shortcut to open Reading List in Safari.

Those of you who have relied on Shortcuts for years know why these actions are a big deal: they’re a first sign of Apple entering a new era of GUI scripting for apps that doesn’t involve any code but is instead all done via visual actions. If this becomes a trend, the implications for pro users and the Accessibility community will be huge: imagine the benefit of controlling app interfaces from a single shortcut for someone who has motor or visual impairments, or the ability to execute macros in iPadOS apps like you may be used to doing with tools like Keyboard Maestro on the Mac. At least I want to believe this is where we’re heading with these actions.

The Find actions are another powerful addition for Safari users this year. With these actions, you can search and open your tabs, Reading List items, or bookmarks from Shortcuts without having to do so manually in Safari. The ability to search Reading List items is especially nice since it allows users to create more advanced workflows for a feature that has been seemingly forgotten by Apple. 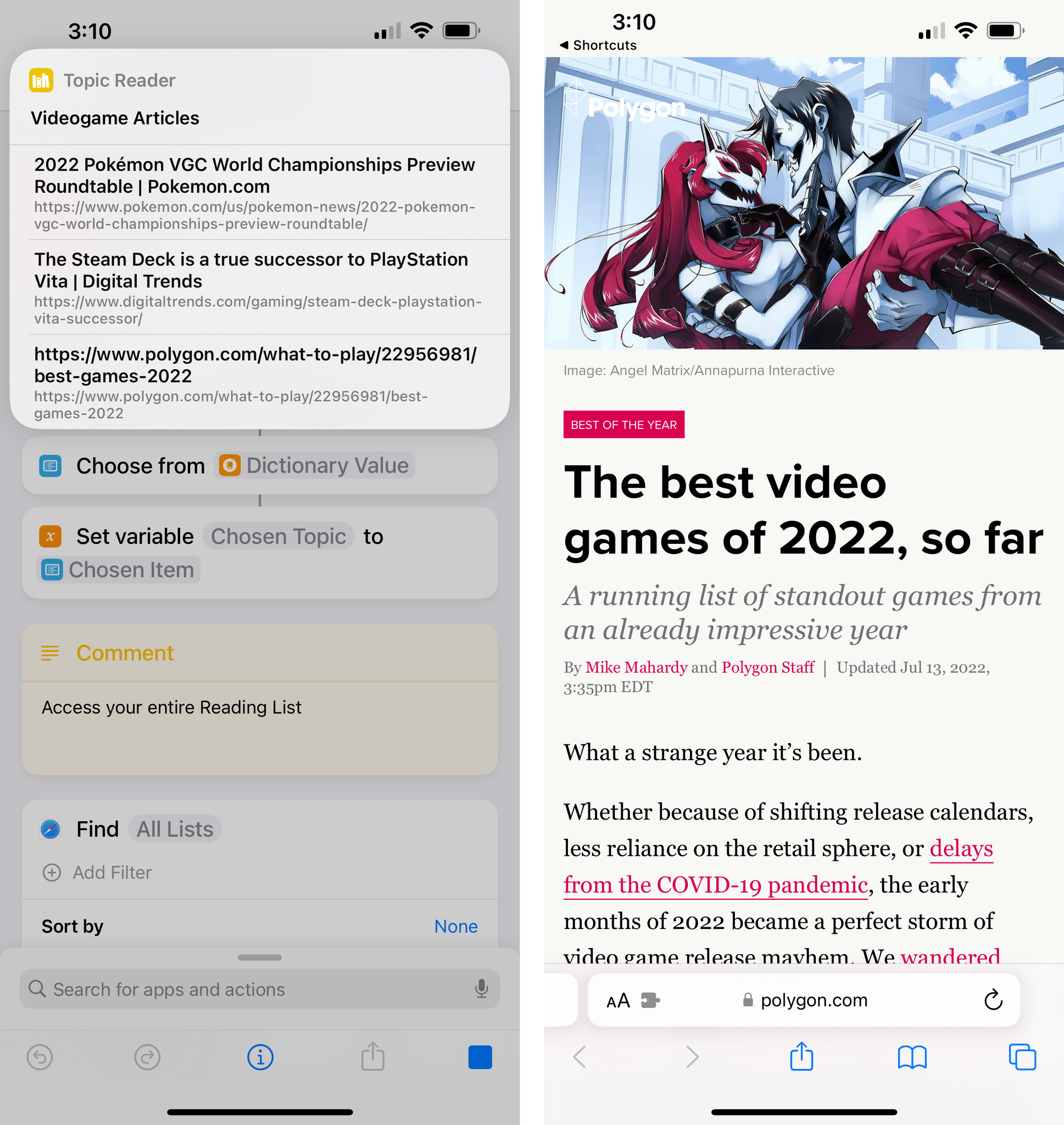 I was so happy about this addition, I prepared a shortcut called Topic Reader, which uses the new ‘Find’ action of Safari to let you browse your Reading List by topics rather than standalone articles. I’ll release this shortcut later this week for Club MacStories members in MacStories Weekly.

Moving on, we have Mail, which has gained two actions in iOS 16: The ‘Open Mailbox’ action is neat in that it lets you pick any mailbox so you can quickly view it in the Mail app. For a SaneBox user like me, that means I can create shortcuts to jump into my SaneLater and SaneNews mailboxes via Siri or the Shortcuts widget. Alas, the ‘Search Mail’ action is also a simple launcher that will open a search for the selected query in the Mail app; you won’t see search results in the Shortcuts app.

Speaking of Shortcuts, the app itself has received new actions in iOS 16 to create and delete shortcuts as well as the ability to open a specific folder in the app. Now, why would you want to delete a shortcut from a shortcut (you know) instead of doing so manually? This sort of meta-addition to the app will be useful to power users who have hundreds of shortcuts installed and may want to clean up their libraries.

Alas, I was hoping this action would come in handy when combined with the ‘Shortcut’ variable type, which contains a property that returns the action count of a shortcut in iOS 16. By combining the ‘Get My Shortcuts’ action, the ‘Action Count’ property, and the new ‘Delete Shortcuts’ action, I thought I could create a shortcut to delete all shortcuts in my library that contained 0 actions. These are the shortcuts I create when I want to test something quickly, then I delete their actions, but forget to delete the shortcuts themselves. Unfortunately, the ‘Delete Shortcuts’ action doesn’t seem to accept a list of shortcuts saved in a variable, which is shortsighted. 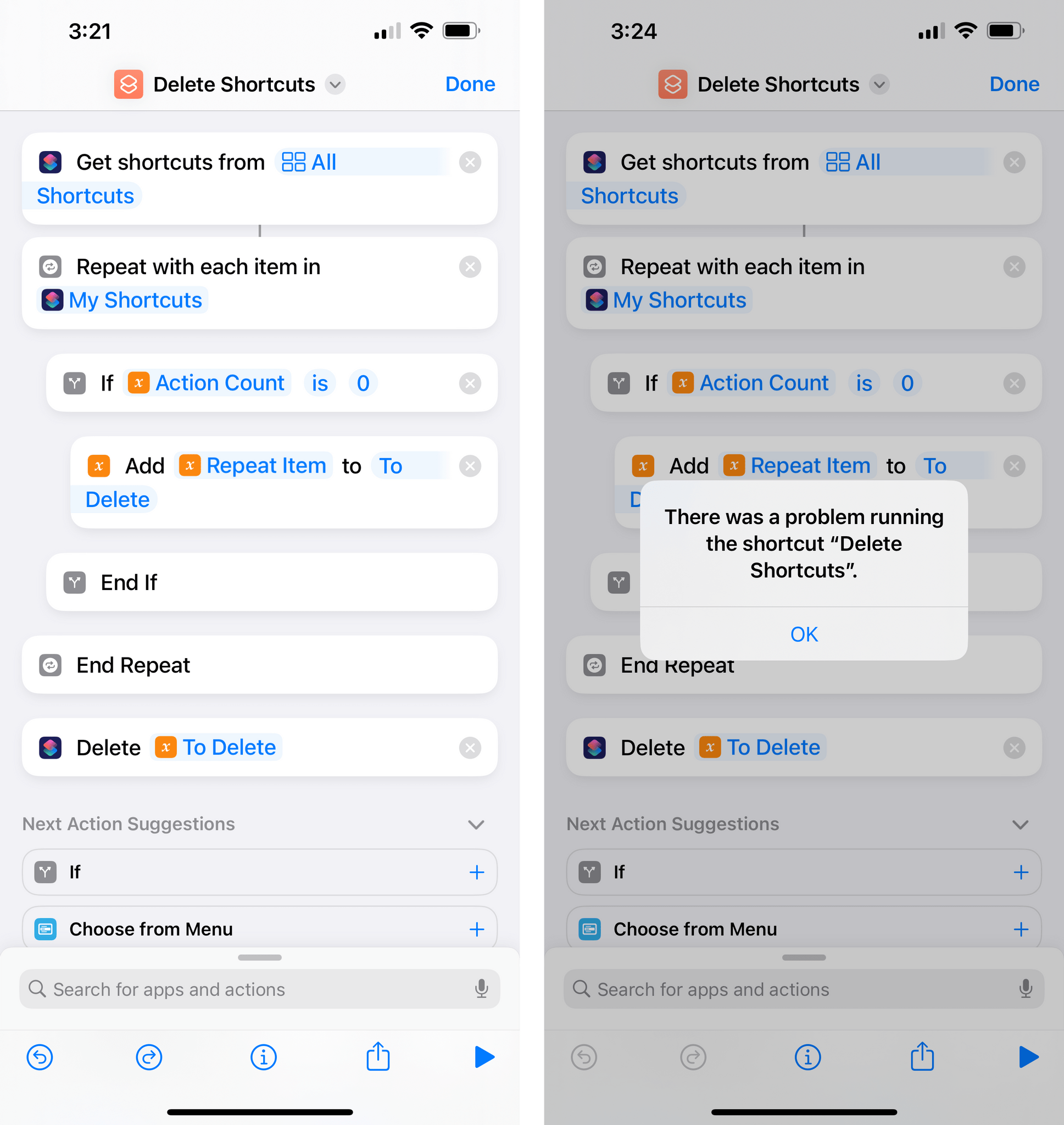 This should work, but it doesn’t.

These are the big additions for apps in Shortcuts for iOS 16. Then we have a grab bag of other new actions, which aren’t as important but that I still find useful:

Clock: The ‘Open Tab’ action lets you open one of the views in the Clock app.

Location: There are new actions to ‘Get Parked Car Location’, ‘Get Details of Parked Car’, and ‘Set Parked Car’. Notably, the last action lets you manually set a location for your parked car with the ability to attach a note and image to that location, which is not something you can do with the Maps app alone. I will explore this feature in the special issue of MacStories Weekly we’ll release later this week. Also worth noting: the location returned in Shortcuts for iOS 16 is a rich Maps snippet that’s much nicer-looking than iOS 15. 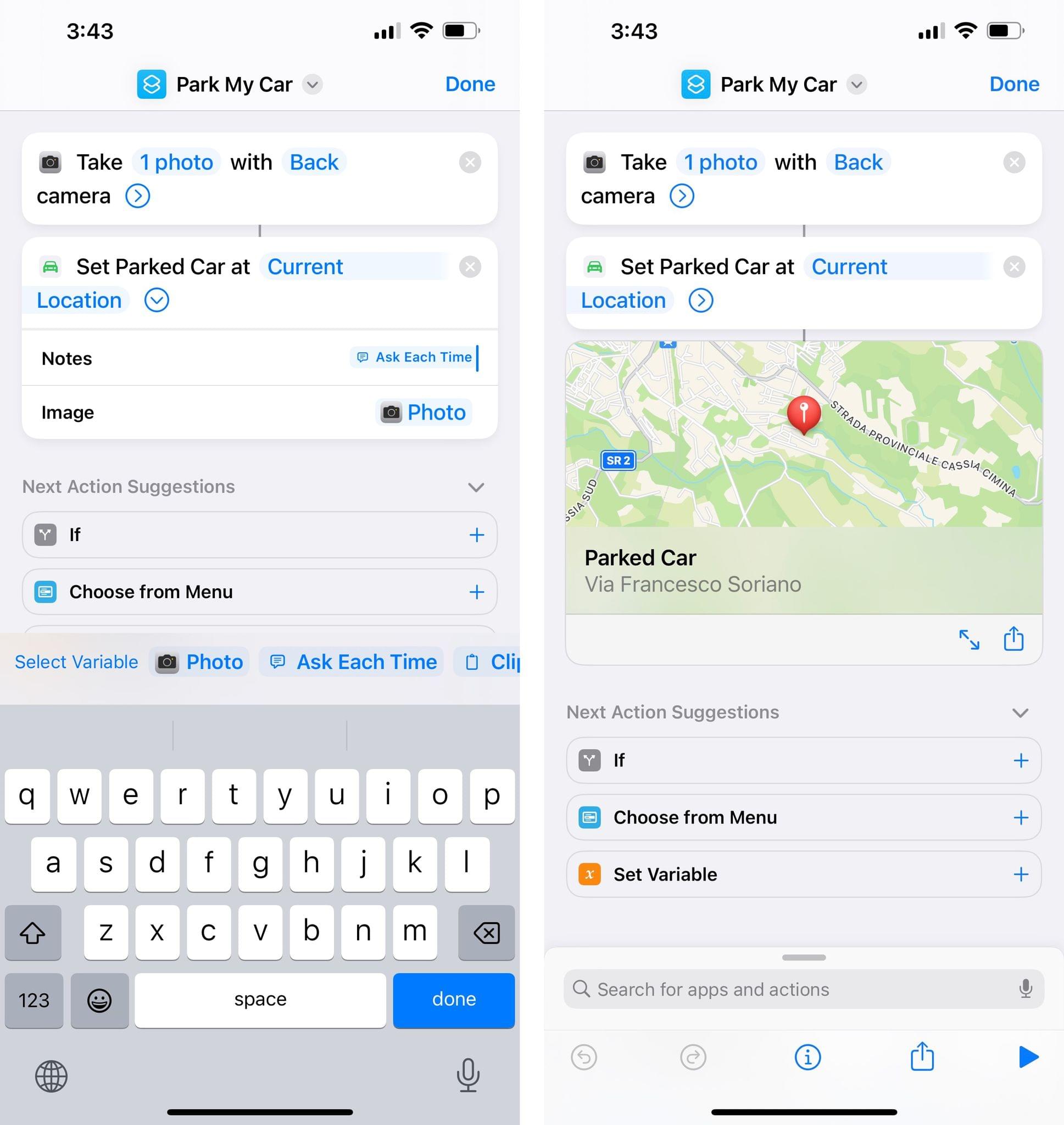 The new Maps snippets in iOS 16.

Scripting: The ‘Set Personal Hotspot’ action lets you turn your hotspot on/off or toggle its state.

Files: You can start a search in the Files app by looking for some text with the ‘Search in Files’ action.

Documents: The new ‘Optimize File Size of PDF’ action lets you reduce the file size of PDFs by compressing images inside them. (If those images are already compressed, the selected document may end not being smaller than the original.)

Miscellaneous: All the Apple apps that support Focus Filters in iOS 16 also come with an associated Shortcuts action to set or toggle the filter from Shortcuts. You’ll find ‘Set Focus Filters’ actions for Mail, Safari, Calendar, and Messages. 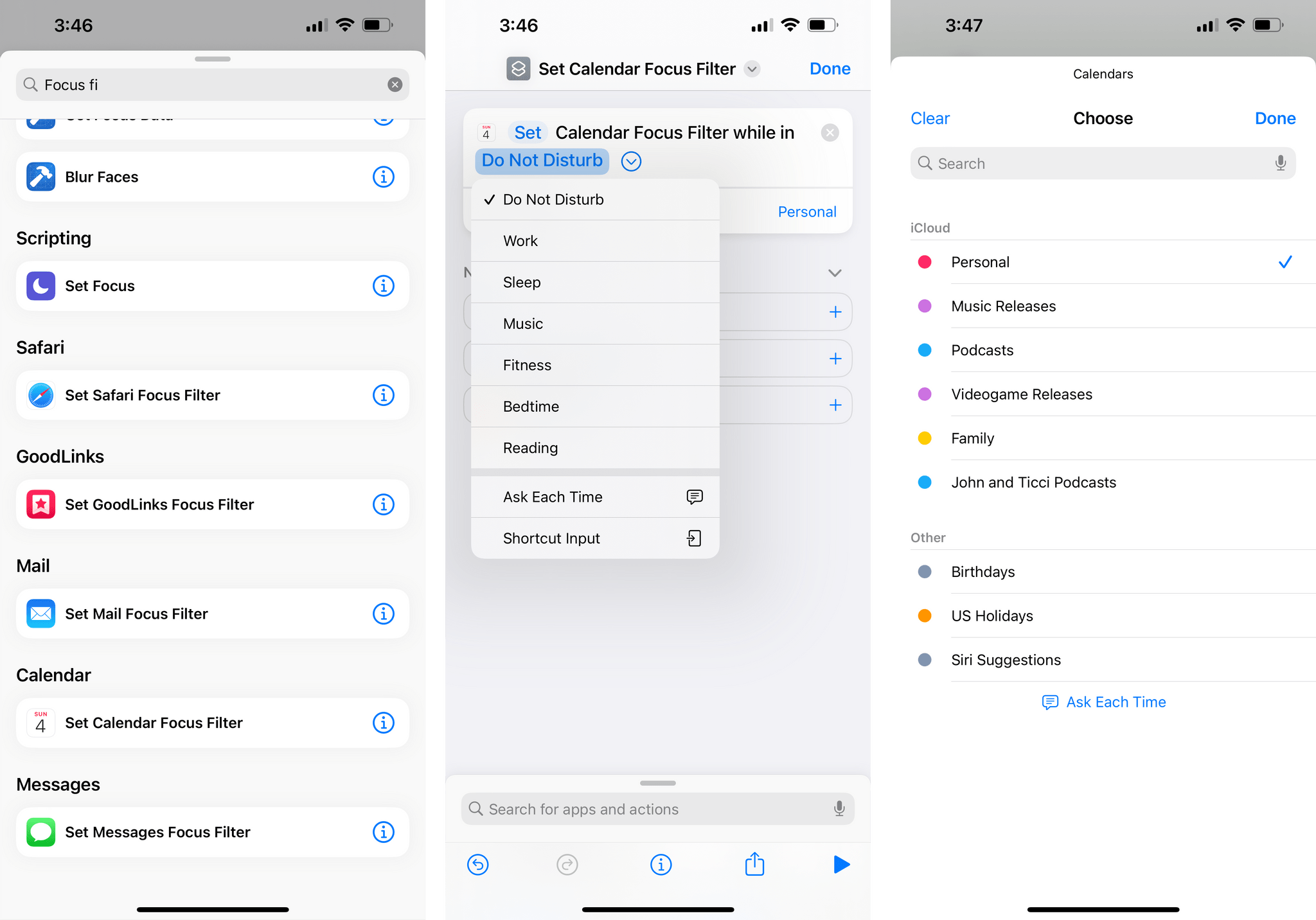 You can set Focus filters from the Shortcuts app too since the feature is based on the same App Intents technology used by Shortcuts.

I saved the funniest new action for last. The ‘Remove Image Background’ action is the Shortcuts equivalent of the new feature in the Photos app that lets you press on a photo to lift its subject and drag it into other apps. As we’ve seen in the Lock Screen chapter, Apple has implemented this background removal technology in various places throughout iOS 16, and that includes Shortcuts. With this action, you’ll be able to remove the background from any image passed to it (provided the subject can be isolated successfully) and, optionally, crop the resulting image to the bounds of the new subject. I don’t know why I’d ever want to do this in Shortcuts, but when the results look like this and they’re hilarious, why not?