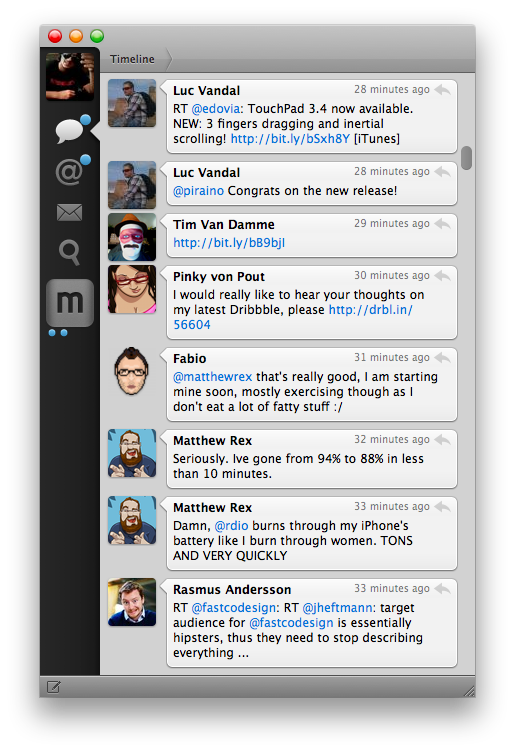 The original Tweetie for Mac – the app that went on to become Tweetie 2 or “Twitter for Mac – stopped working today. Twitter cut access to the API endpoint that allowed for it to work, thus effectively “killing” the app for those who were still using it.

Tweetie for Mac came about on April 20, 2009, and it brought along its own set of UI paradigms that propagated throughout Mac app design culture. The sidebar navigation, for instance, is probably in use on whatever Twitter client you’ve got installed. The ‘nipple’ that indicates the current position on the navigation bar is also a Brichter invention, and now exists in hundreds of apps like Google+, Instapaper and dozens more. It eventually found its way to Tweetie 2 for iPhone as well.

To me, Tweetie was more than an .app bundle available from /Applications in the Finder. It represents a period of my life that I cherish every day.

I joined Twitter in February 2009. As I said, I was jobless at the time. I thought I could try my hand at writing about Apple and Macs, and my girlfriend said “go for it”.

Today, we kiss Tweetie goodbye. MacStories and my girlfriend are still around, and my relationship with them is better than ever. I didn’t realize this back when we celebrated the site’s third birthday – that MacStories and Tweetie for Mac launched on the same day.

Tweetie and I had our ups and downs. I loved the app, but I became frustrated with the multiple delays version 2.0 was seeing. I wrote some things about Loren that I’m not proud of. Years later, I apologized to him, but I’m keeping those posts online to remember that sometimes I can be wrong, and ridiculously so. In late 2010, Loren was so gracious to let me beta-test “Tweetie 2.0”, which was launched as Twitter for Mac on the App Store. I used that app until Tweetbot for Mac came out. Loren moved on with his life and left Twitter; I, behind my keyboard, picked a different Twitter client.

I guess, in a way, this site owes much of its success to Tweetie for Mac. I woudn’t have been able to get to know developers, friends, colleagues, and readers if it weren’t for Twitter. If it weren’t for Tweetie, which to me, was Twitter.

I remember using Tweetie all the time. Sometimes I would go days without closing it, keeping it open because I was “looking for news” or trying to get into some new beta of an upcoming iPhone app. Other times I would close Twitter during the night, because, back in the “old days”, Twitter clients – not even Tweetie – had good timeline gap detection.

Tweetie set standards and inspired other developers to create new apps. It won awards, and it marked the starting point of a new era of third-party OS X development.

Goodbye, Tweetie. Our community is better because of you.