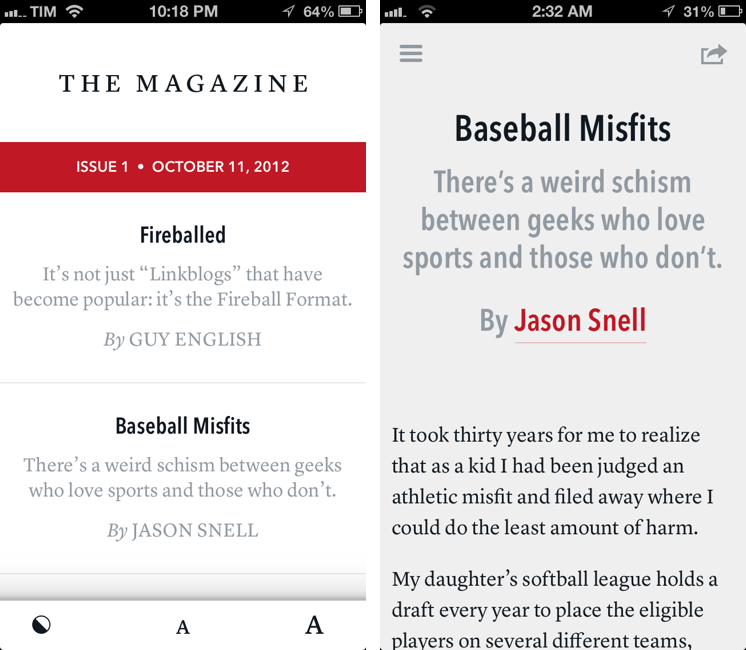 When people ask me about my job, I usually reply: “I write about technology”.

Just a little over three years ago, I found myself unemployed, so I started MacStories. It wasn’t easy. Not because of WordPress, FTP, or getting black pixels to appear on a white background. I’ve never had a problem with putting words on a screen.

It wasn’t easy because where I live, a small town in Italy, writing about technology sounds a lot like “I spend my days at home looking at a computer while I drink coffee” . Which, to be fair, is a pretty accurate representation of my daily agenda. But how I do it, and why I do it, and understanding the whole idea of seeing technology as more than a bunch of cables – well, that was the not-so-easy part.

It still is. I know it will be for a long time. And yet I keep typing on this keyboard because I think it’s worth it. I do what I can by writing about my experiences.

Because, hopefully, thanks to technology, our kids will have a better future.

Because twenty years from now, people won’t “find out” they have cancer. They will know in advance, thanks to technology.

That’s quite a goal I, and others like me, are priding ourselves upon, you’d argue, when, effectively, what we do is reviewing apps and reflecting on the latest news. In practical terms, that’s what I do. But I see it as more than that.

Writing is about making connections.

In the past three years, I’ve seen how the great technology writers I look up to are able to make connections between topics and streams of thoughts: they look at the big picture.

On the flip side, technology writing, a scene that’s built on its very distinct and yet cohesive communities, has created connections between people. I wouldn’t have met the MacStories team if it weren’t for writing and following the same writers. I wouldn’t have gotten to know friends like Shawn, Stephen, Gabe, David, Matt, Matthew, Justin, Brett, and many more.

In fact, if it weren’t for this little writing thing of ours, I wouldn’t have met any of you.

Great writing creates connections inside and outside of text.

Marco Arment’s The Magazine falls exactly under this aspect of writing. It’s about people who love technology, delivered as a curated collection of articles from great writers. In a way, it’s the opposite of Instapaper: while Marco’s more popular app is what you make of it, The Magazine is Marco’s own vision. So, yes – you’ll have to trust him on this one.

I’ve never met Marco in real life. We’ve exchanged emails a couple of times and perhaps replied to each other on Twitter. The other day we talked about pears on App.net. But see, the great thing about the Internet is that I genuinely like this guy only because of his work and passion for technology.

I think The Magazine is a promising and notable initiative for a variety of reasons. Firstly, for as much as I praise the tech community, there are aspects of it that I’m not particularly fond of. I don’t like rumors and linkbaity headlines. Sometimes I think that it’s too much when a site tries to tell me everything about a topic with 20 articles. In the words of Marco, The Magazine will take a “a measured approach to the big picture” with “meaningful editorial and big-picture articles”. Or, as Guy English writes in “Fireballed” for the first issue, The Magazine is both old and new. It’s old in that it won’t share the same publication schedule of most blogs; it’s new, because it should encourage writers to create more, new “timeless pieces” based on a business model that their “Fireball Format” website wouldn’t probably allow. I suggest you read Guy’s article in the first issue (there is a free 7-day trial).

I’ve heard from several people who received copies of The Magazine in advance that, in hindsight, the idea is obvious. Get articles from great writers and make an app out of it with new content available periodically. To me, The Magazine seemed “obvious” more because of the technology it’s built with.

Earlier this week I wrote a post on how to hide Newsstand from iOS 6. The Magazine is entirely based on Newsstand, and, a year after the launch of iOS 5, it’s the first app that gives it a purpose, at least for me.

I’ve never been a fan of most content that is offered on Newsstand. Magazines don’t really make an effort to leverage the core features of iOS; there are a few exceptions, but they haven’t lured me into Newsstand completely. I’m fairly certain Marco’s The Magazine will do so for people who, like me, never quite “got” Newsstand. 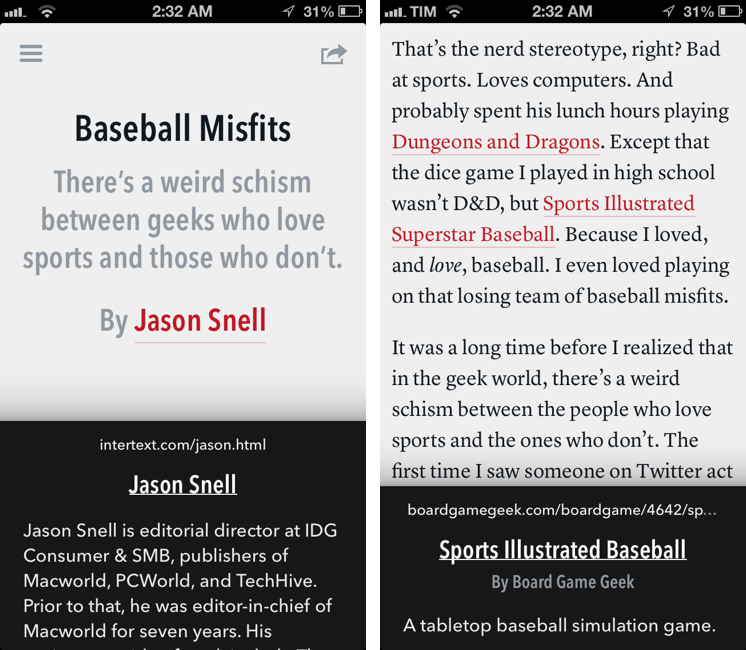 The Magazine is beautiful. Both on the iPhone and iPad, it makes use of elegant titles and clean, legible serif typography for the body text. Unlike most magazines, The Magazine has real, selectable text that you can copy, define with iOS’ standard dictionary, or hear with VoiceOver. 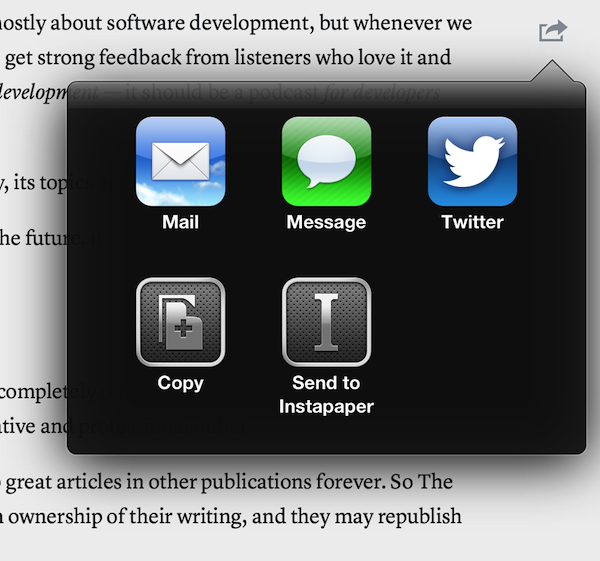 Articles, presented in an uncluttered full-screen layout, support iOS 6’s native share sheets with options for Mail, Message, Twitter, Facebook, and Copy. There’s also a custom “Send to Instapaper” action that sports a custom icon made specifically for The Magazine. Interestingly, Marco chose to display the “Log Out of Instapaper” menu directly in the share sheet.

The app is text. There’s basically no interface chrome – no toolbars, no top bars, no complicate grid views to manage. When text isn’t the interface, The Magazine displays a main screen that lists your issues and, for today’s launch, Marco’s Foreword. At the bottom of the screen, there are buttons to increase/decrease font size and change the color scheme from light/red to dark/blue. I love these themes. And I like how the cover of The Magazine in Newsstand is available in both options. 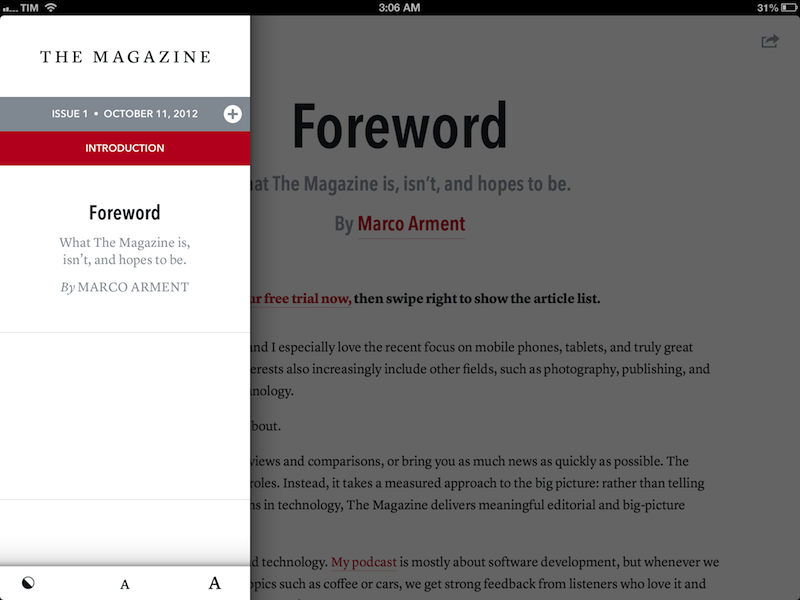 In a world of iPad magazines built upon intricate navigation schemes and mazes of advertising masqueraded as “content”, The Magazine is refreshingly honest. It’s really just two screens: the list of articles, and the actual article. On the iPad, the article list is presented as a sidebar/panel that slides in from the side of the screen; to switch between the list and an article, it’s all just taps and swipes.

Don’t let the name fool you – there’s nothing convoluted about The Magazine. It’s just text and touch.

The fact that The Magazine is extremely simple doesn’t meant it lacks the little touches. You can swipe on “issue header” (the red bar) to bring up trash icon to delete the issue. Marco implemented a variation of Instapaper’s inline footnotes that also works with links and author names. On the iPhone, these footnotes are displayed in the bottom part of the screen; on the iPad, they’re custom-designed popovers. 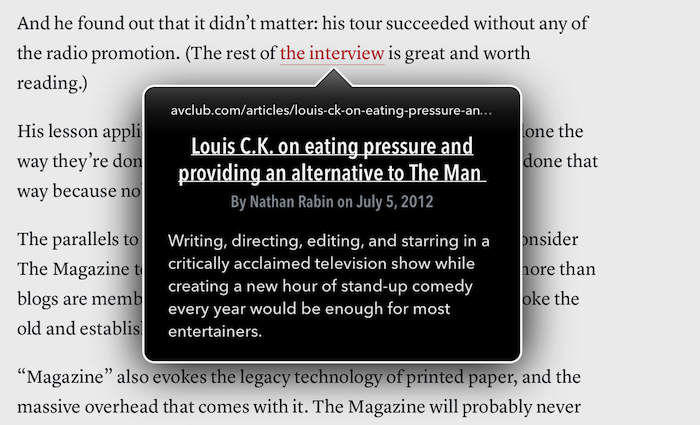 I was particularly impressed by how the app handles links and author names: authors have been associated with a website and description that is displayed alongside their name; tapping on an author’s name from the footnote will take you to the website. Links, too, will open a footnote displaying a title, URL, author and date, and brief description. 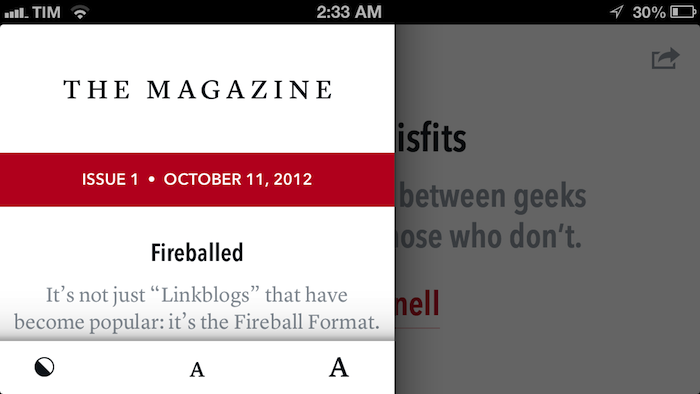 It’s a subtle detail, but I also like how the red issue bar “snaps” onto the status bar when you’re scrolling a list, and the peculiar implementation of landscape mode on the iPhone.

I don’t have much to say about the business model of The Magazine except that I think it’s going to work. Marco has a loyal following already, and I’m all for directly supporting writers and creators of this type of services. I found the content of the first issue top-notch, and I can imagine it’ll only get better from here. $1.99 per month is a no-brainer. If, for some reason, this doesn’t work out, Marco says it’ll shut The Magazine down within two months. Furthermore, in the Foreword (which I recommend reading), Marco explains why The Magazine won’t have “infographics, slideshows, or interactive panoramas”. According to him, there will be “occasional images”, though I haven’t seen any in the inaugural issue.

I had some questions about The Magazine even after reading the Foreword, and I reached out to Marco for clarification.

The Magazine and Instapaper are, technically, two separate businesses; Marco told me he doesn’t have any plans for integrating The Magazine inside Instapaper for now.

I was curious about the way The Magazine can save URLs to Instapaper. If articles aren’t available in their entirety anywhere (they get truncated on The Magazine website), how can the app send the full contents of an article to Instapaper? “Since Instapaper allows apps to supply URLs and their HTML content when adding a link, The Magazine’s send-to-Instapaper feature required no changes to the Instapaper API and uses no undocumented functionality”, Marco explained.

In the Foreword, Marco also wrote that articles don’t need to be exclusive to The Magazine. Authors retain ownership of their work, and they’re free to republish an article elsewhere after a month. The opposite is also true: The Magazine will feature articles that had been previously published on an author’s website. Occasionally, The Magazine will feature articles from an author’s archives; I’m told that, when this will happen in future issues, these articles will be clearly visually differentiated from original content.

Usually, things are done the way they’re done for good reasons. But sometimes, they’re only done that way because nobody has questioned it recently.

For this niche – our niche – I find The Magazine to be a fantastic idea. Its execution is flawless, its presentation reminiscent of Instapaper’s class and verve.

Personally, I believe The Magazine deserves attention because it can leverage the ubiquity of the App Store to bring more voices and listeners into our community. People who love technology are never enough in my opinion, and The Magazine can act as a bridge to introduce them to fellow advocates of the relevance of technology in several aspects of our lives.

In a small town in Italy, I’m drinking coffee while typing words on a keyboard. Today I decided to write about the new project of a guy named Marco that I’ve never met. It’s a great idea to connect writers who care about my same passion with readers who are just like me. Tomorrow I will make more coffee and write about someone else’s great idea.

In our niche, words are ideas. Connections. Challenges. It’s not a coincidence that part of “technology” derives from the Greek “logos”.

If we truly believe in the impact quality technology writing can have on others’ vision, we must face the fundamental shift that is happening and embrace projects like The Magazine.

When people ask me about my job, I usually reply: “I write about technology”.

And then I add: “But it’s really more about the people”.