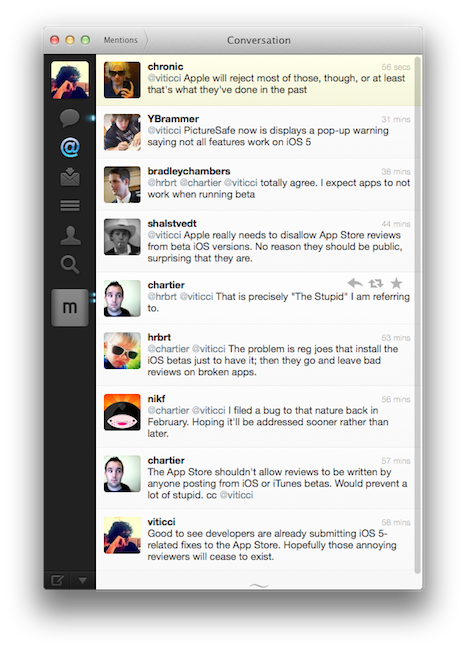 These past few weeks of iOS 5 testing and casual talking with my fellow writers and Twitter followers had me thinking about the fact that some people really don’t get the difference between “public previews” and “developer-only betas”. I’m talking about those people who are leaving negative reviews in iTunes for apps that are allegedly “broken” under iOS 5, which reached the beta 2 status last Friday.

There’s an important difference between previews and developer betas. With previews, like iTunes in the Cloud, Apple feels confident enough to release a new piece of software with new features to the public and let everyone enjoy it until the final version (with more features) comes out. Example: automatic downloads and past purchases. In spite of Apple calling it a “beta”, this is in fact a public preview (that requires iTunes 10.3, also public) of the new iTunes in the Cloud system that will gain the additional Match functionality this Fall. So why is Apple letting regular users mess with a beta? Because it’s not really a “beta”, not in the sense we geeks are used to when seeing the beta label on Apple’s various Dev Centers. iTunes in the Cloud is a public preview of something that will grow even bigger in a matter of a few months. The company knows it’s stable enough for everyone to play with. All the systems are in place. No third-party support is required. All users can benefit from it now, and will get to use more functionalities once the faux beta label goes away. It’s a good deal.

And then there’s the iOS Dev Center, hosting developer-only betas of iOS for iPhone, iPod touch and iPad; a new Xcode version and the SDK; a new iTunes beta; a special version of the same iOS beta, but for the Apple TV. What’s so different about these betas? They’re not meant for everyone. They’re available to those people who a) paid $99 to become registered Apple Developers and b) understand the risks of installing real “beta” software on their primary devices. Even so, Apple makes it clear to these people that iOS betas should be installed on development devices, because they are pieces of software for people who paid to become Apple Developers. It’s simple.

For this reason, I can’t stand the fact that people who don’t understand the importance of testing betas have access to this software and contaminate the Internet with clueless discussions about what’s broken and what “sucks”. Mind you, I don’t condemn the fact that anyone who pays $99 can become a developer: I did, I know other writers like me who did, and if Apple is okay with that, then I’m okay with that too.

But, you see, it’s about the attitude. It’s about knowing what you’re going to enjoy and lack after installing an iOS beta, and respecting the iOS community during the transition period from one OS to another.

Specifically, I’m talking about those idiots leaving negative reviews in iTunes for apps not compatible with iOS 5 yet.

Let alone the fact that, in my opinion, Apple should figure out a way to prevent owners of iOS and iTunes betas from leaving reviews on the App Store, I think the wider problem we’re facing now with these iOS 5-related reviews is that some people are just plain ignorant. In fact, they seem to ignore that these reviews affect developers more than they know: a negative review, no matter if it’s left from iOS 5 beta, is still a negative review. And from a developer’s perspective, it hurts. Even worse, these people don’t seem to realize that the developers they’re criticizing with their reviews are likely already working on an update to ensure iOS 5 compatibility and access to new system features.

I don’t want to focus on the way these “users” illegally got their hands on an iOS beta without being registered developers (though the most common method seems that of paying some shady individuals or “companies” for getting a personal device’s UDID registered), so here’s a mix of thoughts I have about the whole “I run iOS 5 beta and I want to leave my unbiased review in iTunes” story:

I don’t want to think all the users who have left negative reviews of apps not compatible with iOS 5 beta are stupid people who don’t have the capabilities of understanding this is actually a real issue for developers. I want to believe most of these people have gotten access to an iOS 5 beta because they thought “it was cool”, but they don’t realize a review for something a developer can’t fix yet it’s a serious marketing problem on the App Store. So maybe this article, and the commentary on Twitter, will bring some clarity to the situation and non-developers running iOS betas will stop writing reviews.

Betas are meant for testing and feedback; rather than being an idiot and complaining about your broken toy, help out the iOS community and get in touch with the devs to help them build better apps.