Last year Apple released a new iPhone, the all new iPad mini, and also the fourth-generation iPad - all in September and October. This is quite monumental because the iPhone and iPad now represent 69% of Apple’s revenue. There’s little doubt that Apple scheduled these releases for late in the year so that they could be “new” and highly attractive devices for holiday shoppers. Because these two huge products were so recently updated, Apple will likely deliver a stellar Q1 earnings report when they announce it later this month. However, it also means that later quarters, most notably Q3 and Q4 2013 will be hit hard as these products (iPhone 5, iPad mini, 4th gen iPad) become “stale” as competitors have time to catch up and release competitive products. 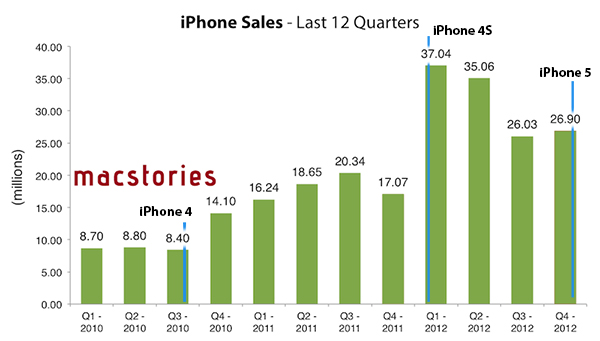 In fact, last year Apple already experienced a pronounced slow-down in iPhone sales during Q3 and Q4 due to a combination of stronger competition from other newly released devices, product rumours, and the expectation of a new iPhone to arrive once a year (and hence to hold off purchasing). At least in 2012 Apple could partially offset the drop-off in iPhone demand for an increase in iPad demand when it released the iPad (3rd generation) about half-way into the iPhone 4S’s availability. By bundling both the iPhone and iPad to September/October release, there will certainly be a pronounced boost for Q1 sales but there’ll be a deafening lull in sales around the middle of 2013.

By releasing updated iPhone and iPad models every six months, Apple would be moderating the initial demand of those devices. Because whilst some people would still buy every model, for most people that’s far less feasible than even yearly upgrades, so you would find that demand gets “split” between the six month releases. It would thus prove much more manageable for Apple’s supply management, because they’d no longer need to rapidly ramp up to incredible levels of supply for a launch and then scale down for that mid-year sales lull. Rather, it would be a more modest ramp-up every six months for releases and a less extreme drop-off in between releases. 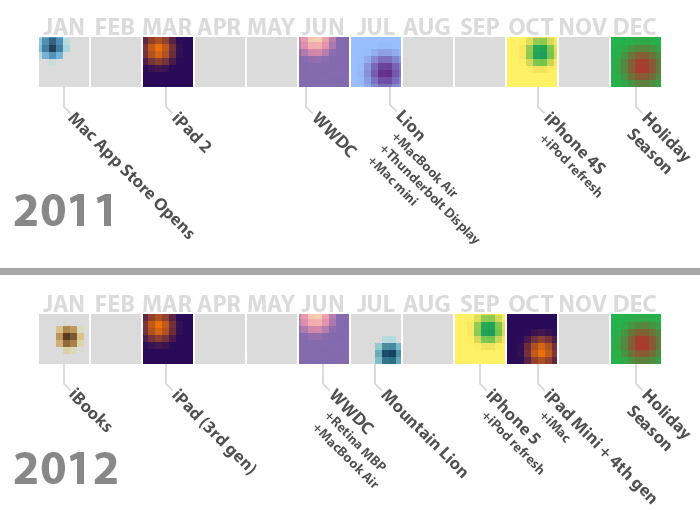 If you look at the 2011 calendar of major Apple announcements and releases, you’ll see a fairly spread out calendar. 2012 was slightly busier, but you still see a fairly spread out calendar of events there as well. And although we don’t know what surprises Apple has up its sleeve in 2013, it’s safe to say that if they follow the general trends of 2012 and 2013, there’ll be a big period of about 7 months where Apple doesn’t release any major product updates (even Mac updates in 2012 tended to occur in the second half of the year).

However, if you fit in updated iPhones and iPads around the six-month mark (so around March and April), the release calendar suddenly looks a lot more realistic. It would leave Apple with 5 keynotes (same as 2012): two iPhone events, two iPad events, and WWDC. Those iPhone and iPad events could even be used secondarily as a venue to showcase new Macs and iPods as they were in 2012.

Apple has ramped up international rollouts of the iPhone and iPad

In order to move to a biannual schedule, Apple would need to make sure that it could roll out its current iPhone or iPad model to virtually all markets before the new model is announced. Not being able to do so would damage sales and customer goodwill in those regions - just imagine a product being released in a country when its successor is already available in another country.

But as I showed yesterday, recent product releases by Apple (iPhone 5, iPhone 4S, iPad 3) have been able to hit roughly 100 countries in 100 days. That no doubt represents a very high percentage of Apple’s market and still leaves about 80 days before the next release would be scheduled.

With a biannual release schedule and the associated “smoothing” of demand, Apple may even be able to more rapidly roll out their iPhones and iPads internationally because they don’t need to deal with as much demand in the initial month of availability as they typically do.

Take all this with a grain of salt, because we all know how unreliable rumours can be, but they’re worth mentioning briefly.

My current guess is that Apple has moved to a biannual schedule with the iPhone and the iPad - but only just. One particular fact that makes me less confident is whether Apple can keep innovating the iPhone and iPad fast enough to justify the twice-yearly updates. Something I think Apple would be concerned about is the press and general public being ambivalent about the new iPhone because it isn’t that different to the last one they released just six months ago. My guess is that Apple may decide to focus the Spring updates on design changes and the Fall updates on performance improvements or something along those lines. Let me just finish with this quote from the Asymco article that was the genesis of this post:

I would also add that this change in cycle time is an enormous undertaking. Since Apple is an integrated company, not only production but marketing, design, hardware and software engineering must be re-configured.

Apple may or may not actually move to a twice-yearly release schedule for the iPhone and iPad this year, but in any case, bring on 2013 - it’s bound to be another interesting one for Apple.