Following yesterday’s post about the must-have Mac apps I install every time I have to play with a new installation of OS X, I thought it would be interesting to talk about my iPad setup as well.

Of course the iPad is a different machine from MacBooks: not just because it’s an entirely new kind of computing machine, the concept of “OS installation” itself is radically different. On OS X, installation is a clunky process that can take up to several minutes at best; as for the transition from an OS to another, OS X doesn’t come with the simple Backup / Restore system iOS  has. Sure you have Time Machine and Migration Assistant, but those tools aren’t as consumer-friendly as iOS and iTunes.

Speaking of which, that’s exactly what makes iOS different: iOS devices live inside iTunes. iTunes handles the updates, backups, restores, fresh installations and applications. For these reasons, installing apps on an iPad running a fresh new OS is a different story then OS X. Most users have never messed with restore and betas, so they never really had to deal with “starting anew all over again”. I did, and here are the apps I install every single time my iPad needs to be synchronized for the first time. My must-haves. 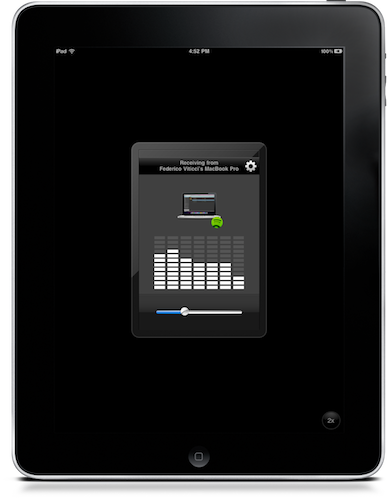 Yes, the first one is an iPhone app. AirFoil Speakers by Rogue Amoeba hasn’t been updated to run natively on the iPad, but it doesn’t really matter as it’s not an app you need to look at all the time. What Airfoil does is pretty simple: it receives audio from Airfoil on the desktop, and with iOS 4.2 on the iPad it can keep that audio streaming in the background. Every day, I fire up Spotify and Airfoil on my Mac, select the iPad from the list of available devices and stream audio to it. It doesn’t need to be open. It’s a great, simple and powerful piece of software you should go download right now. It’s also free.

When I don’t want to use Spotify on my Mac (which has a sexy UI I can’t help but admire on a daily basis), I can just start listening to music using the iPhone app on the iPad. Yes, another iPhone app that hasn’t been updated to run natively yet I need to install. I can’t wait for a proper iPad version to show up (I know it’s in the works), but this one gets the job done, too: being compatible with iOS 4’s APIs, it streams audio in the background on iOS 4.2 and that’s pretty much it. I spend more time in it than Airfoil (mainly to choose songs from playlists), but I generally keep it paused an running in the background. Free in the UK store.

Articles by Sophiestication is the most beautiful way to read Wikipedia on the iPad. Clean and elegant interface design, great typography and clever layout are the features that stand out the most. The latest 1.3 update (which went live last night) introduces a new Table of Content sheet and lot of under-the-hood enhancements. $4.99 in the App Store. 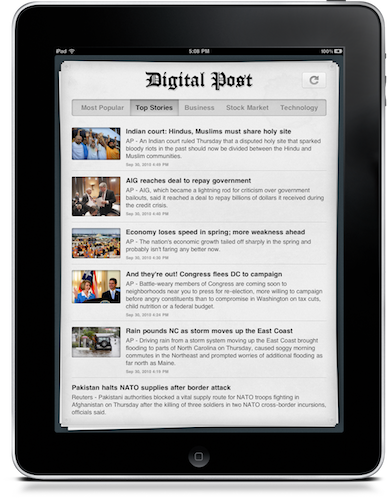 Mike Rundle designed a beautiful application to easily catch up on news on the iPad and released it when the device came out in April, on day-one. Digital Post allows you to read Top Stories worldwide, Business and Tech News and much more in a polished, smooth UI. $2.99 in the App Store. 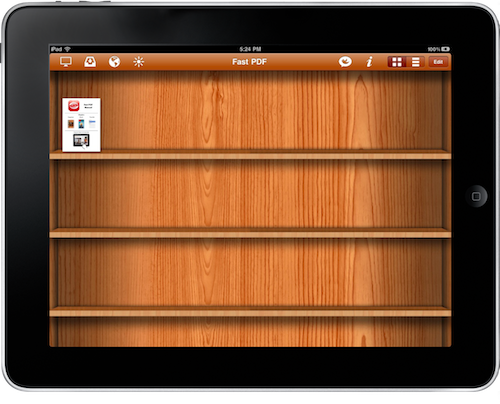 The best app to read PDFs on the iPad, in my opinion. FastPDF by MobFarm is, well, fast at loading large files and it’s got a design very similar to iBook’s bookshelf. Yes, the app has proven to be faster than Apple’s iBooks at loading and letting you scroll through documents, plus it’s got a lot of additional features (such as a downloader, or built-in web server to transfer files) that should enable you to make it fit in your workflow. $2.99 in the App Store.

A full-featured English dictionary for the iPad. The best one around, I don’t really have much to add. Just check out our review, then go download it.

I use iTeleport to access my computer’s screen when I’m not around - e.g. when I’m on the couch reading Instapaper or sending Italian DMs to Cody. iTeleport is my favorite VNC client because it’s easy to setup and has a good keyboard compatibility, something that’s hard to find in VNC clients. The UI is unobtrusive and does exactly what it has to: displaying a Mac’s screen on the iPad surface. $24.99 in the App Store.

Seriously, does this need any more explanations? I don’t want to talk about this anymore - just keep in mind that Dropbox is a must on the iPad as well. Free in the App Store. 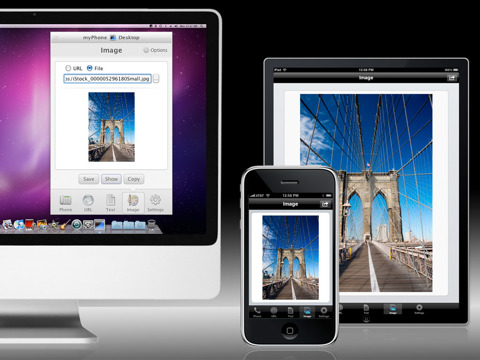 With myPhoneDesktop you can send notifications from your computer to a mobile iOS device. By notifications I mean that if you want to quickly share a link, a picture or some text you just have to hit a button on your computer and the iPad will get a notification with the newly shared item. Simple to set up, lightweight and absolutely useful. $4.99 in the App Store.

Here’s another app that I mention every day and doesn’t need to be introduced to MacStories’s audience. 1Password stores my logins and private data, the iPad app looks great and it’s been available for quite a while now. A standalone iPad version is available at $9.99, but you can purchase the universal one at $14.99.

This is a neat little utility that lets you convert units in a pretty cool interface. As you can guess, I use it for Dollar - Euro conversion, but I can assure you it’s good at everything else it’s got. Plus, it’s only $0.99 in the App Store. 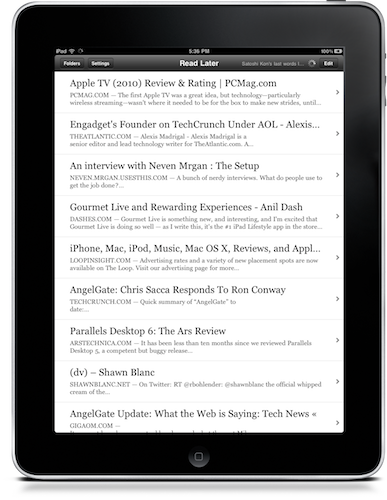 Oh well, Instapaper. The app that’s been out since day one on the iPad and which has never left my beloved tablet homescreen. Look, if you want to read about my relationship with this app, please go here. Then go download the app, because it’s totally worth it. I can’t think of reading the material I collect on the internet every day in any other way than Instapaper.

Flipboard is an app that made a few people talk about its features. And by “a few” I mean the whole internet - see by yourself. Flipboard is a “social magazine”, in a way that it collects links shared across Twitter and Facebook and re-arranges them in a cleverly designed magazine-like UI with a focus on beautiful typography. Flipboard has neatly integrates with Twitter lists to let you skim through the best content shared by the best sources you follow. Free in the App Store.

This is my RSS reader of choice on the iPhone and iPad. In fact, I was one of the first bloggers to cover the original Reeder in 2009 - in a way I’m proud of what Silvio has achieved during the past year. The iPad version is a masterpiece: gorgeous UI, innovative user interactions patterns, blazing fast engine. Reeder is the most beautiful, fastest and most elegant way to catch up on Google Reader on the iPad. $4.99 in the App Store.

Twitter for iPad is Loren Brichter’s latest and most innovative creation: it raised quite a few eyebrows when it came out, perhaps due to its panel-based interface or small bugs here and there. The truth is Twitter for iPad does what no other client on the tablet did before: it breaks the rules. I’ve been running this since the day it came out and haven’t looked back. Free in the App Store.

iFiles is an app I use on a daily basis to store files on my iPad, upload screenshots to the cloud and transfer documents back and forth between the Mac and the iPad. It’s got a polished UI and a nice icon, but iFiles is all about features: it integrates with all the major online services out there, the Rackspace Cloud Files support is killer. Check out our review to know more about it. $2.99 in the App Store.

Air Video allows you to stream any kind of video from the Mac to the iPad. To use it, you just have to install a lightweight server app on OS X, choose a folder containing your movie files and let the app do its magic. The content will be transcoded and streamed live with no delay, and perfect quality on your end. It even supports subtitles. It’s a serious must-have. $2.99 in the App Store. 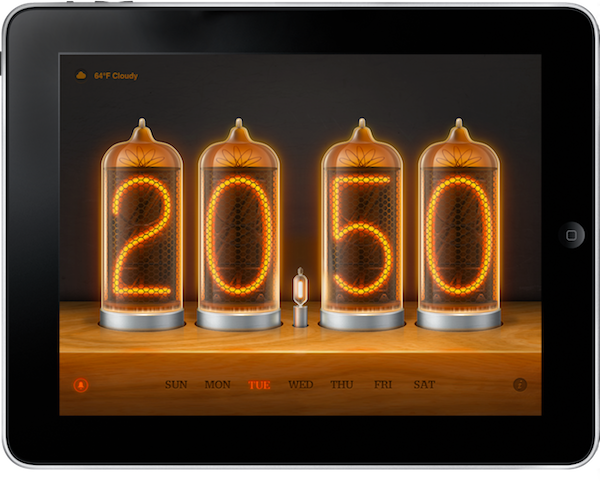 Night Stand HD is the clock app for iPad Apple never shipped. Tons of themes and features to choose from, fast and stable. Read Zak’s review here. Then go buy it in the App Store at $1.99.

A simple and great looking utility from the master minds over at Tapbots which redefines the concept of calculator on the iPad and, in a way, on mobile devices. Recommended. $1.99 in the App Store.

Ever wanted to track your shipments in a beautiful interface? That UPS website is a pain to look at, right? Delivery Status by Junecloud fixes that: available as universal app for iPhone and iPad, it lets you track your shipments from a variety of services such as Amazon, UPS, FedEX and Apple itself. It really came in handy when I had to monitor the status of my new iMac. $4.99 in the App Store.