The iPad has no file browser. There’s no way to aggregate online services like Dropbox and MobileMe in one place by default. The iPad has no visible file structure to let users create folders, move files around, create new files in specific locations.

Still, is it enough to not come up with an app that overrides Apple’s limitations and allows you to build your own file browser? An app that is capable of collecting online services in a single interface, enabling you to download files from the internet and achieve a pretty good cloud-based workflow?

Actually, there are some apps with these features in the App Store, and I’ve tried many of them. Air Sharing HD is probably one of the best around, at least I used to believe until I stumbled upon the first release of iFiles for iPad. 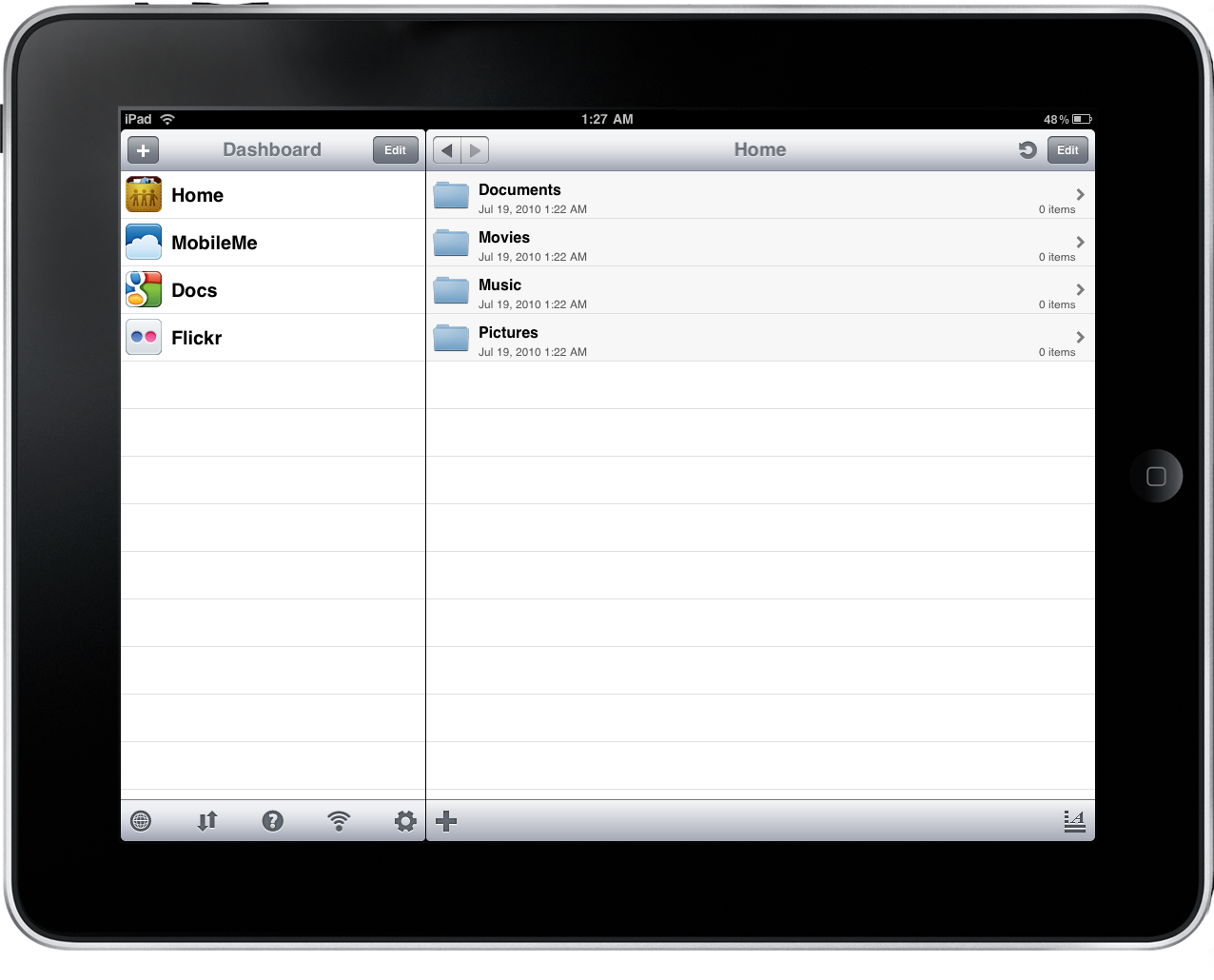 Before the iPad version, I had heard of iFiles. No, we’re not talking about iFile, which is available in Cydia. iFiles for iPhone is pretty popular among users who want to store documents on their iPhone and, say, read PDFs on the go. As you can guess, the iPad version makes much more sense than the mobile counterpart. But before I delve deeper into the application: it has some bugs and weird glitches that will appear every once in a while, including some nasty orientation issues and a terrible bug with the integrated download manager that won’t clear the list of downloads - if any. Indeed, I’m still not able to initiate downloads from the app, despite the developers advertising the possibility to pull files from Facebook, Flickr, MobileMe and all the supported services. Like I said, it’s a pretty important bug. But, the app is sold at $2.99 in the App Store (universal for iPhone and iPad), and I heard that an update is about to be submitted. So, you shouldn’t worry for the developers ignoring problems.

That being said, iFiles is a great application that has managed, in less than two weeks, to deeply change the way I produce content on the iPad. Yeah, I produce content on it. Thanks to its huge amount of features, nice UI (trust me, it matters) and a very good engine, iFiles can already claim the throne for the best file manager app for iPad. File Manager? It’s a file manager, document viewer, text editor, voice recorder and wifi drive. Even if the main purpose of the app is to allow you to transfer files from your computer and carry them around, it’s much more than this. Can we give it a better name? It’s the closest thing to a Central Repository I’ve seen so far.

The main screen is empty, but that’s where you’ll throw all the good stuff. From this screen you can do many things, such as creating folders and files, or add online services to browse their content. The supported services are: Facebook, Picasa, Flickr, Box.net, Google Docs, MobileMe and WebDav. Of these services, I’ve tried Flickr, Google Docs, Facebook and MobileMe, but I haven’t managed to authenticate with Facebook. I also haven’t been able to download files (again, this should be fixed soon), so let’s just focus on how you can browse these services - and trust me, it’s surprisingly useful. The Flickr integration makes iFiles almost as good as many other Flickr-specific clients in the App Store. 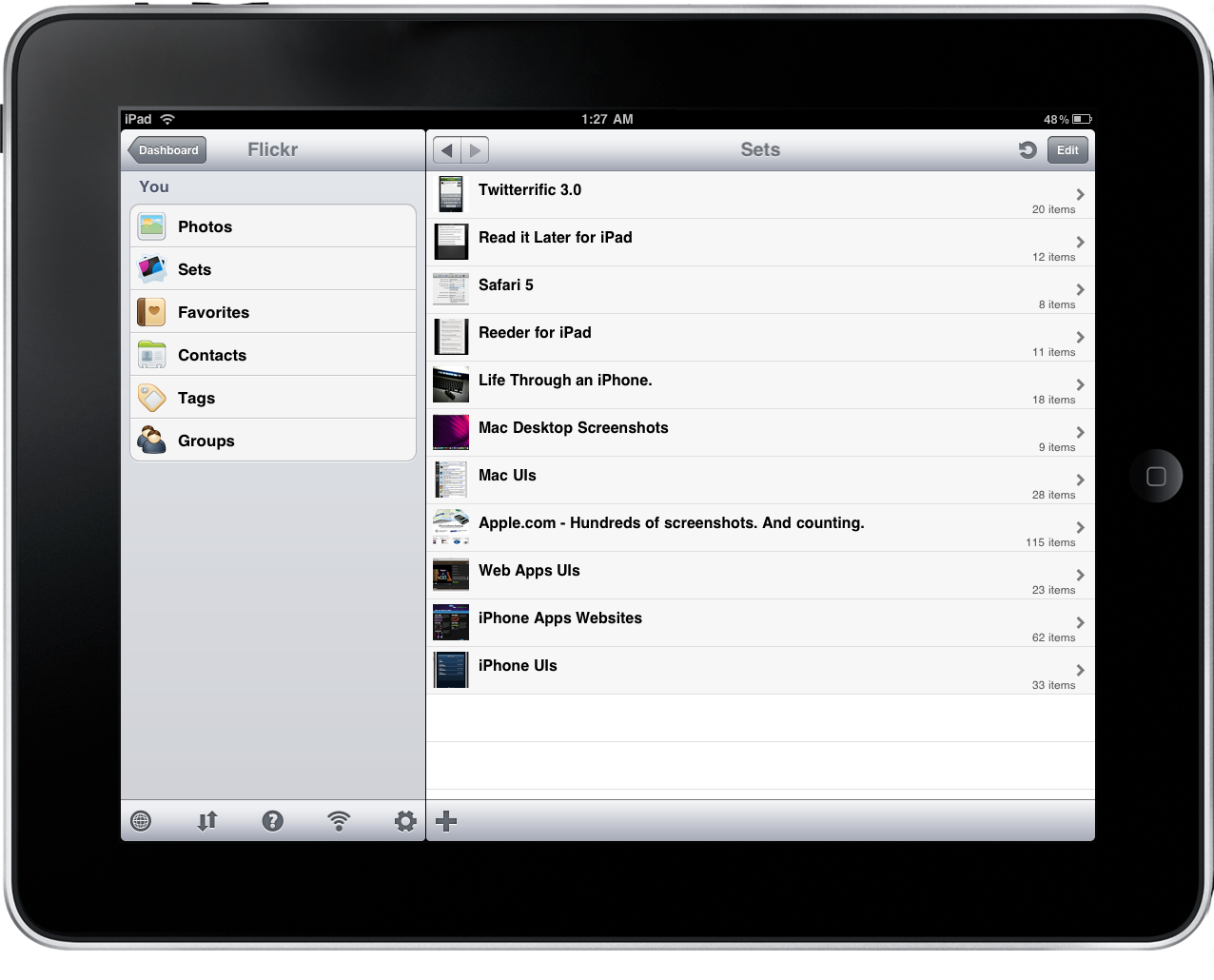 Once you’ve authorized with Flickr you’ll be presented shortcuts to your photos, sets, favorites, contacts, tags and groups right in the sidebar. As you browse between them, you’ll notice that the interface doesn’t change whether you’re checking on your favorites or tags, but still you can see everything. It’s complete, but it’d be nice to see the app changing its behavior depending on what you’re doing, in which section. If you open a photo, you can tap on an arrow in the bottom left corner to save to Library, Email, Rotate and delete it. Integration with MobileMe and Google Docs works pretty much like this: you see shortcuts to “places”, and you can preview documents (Google Docs).

As soon as the devs will fix the aforementioned bugs with downloads and uploads, iFiles will be a killer app to access your cloud-based accounts and social networks in one single place. Right now it’s a very comfortable and useful viewer of online content. Oh, there’s a built-in web browser, too. 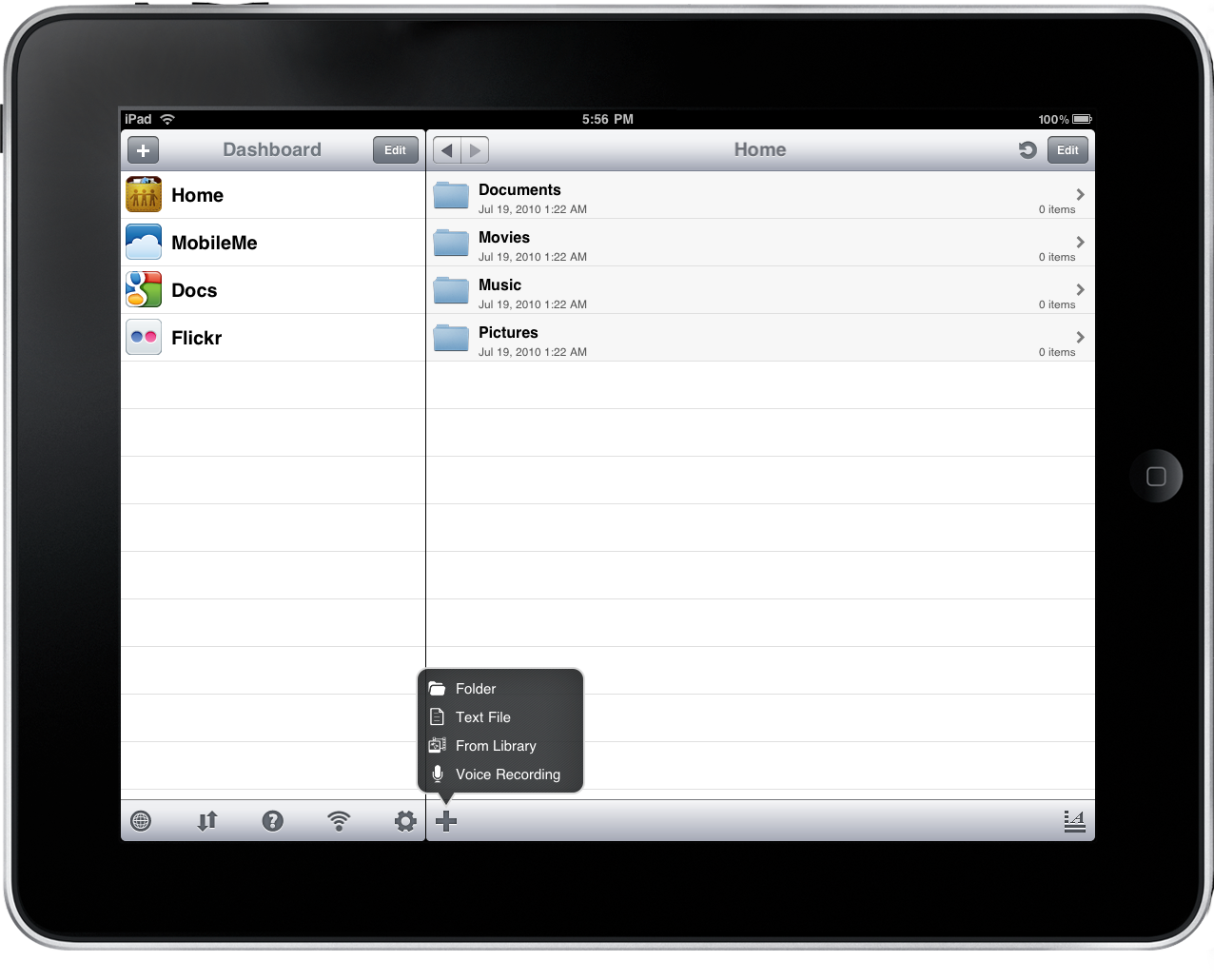 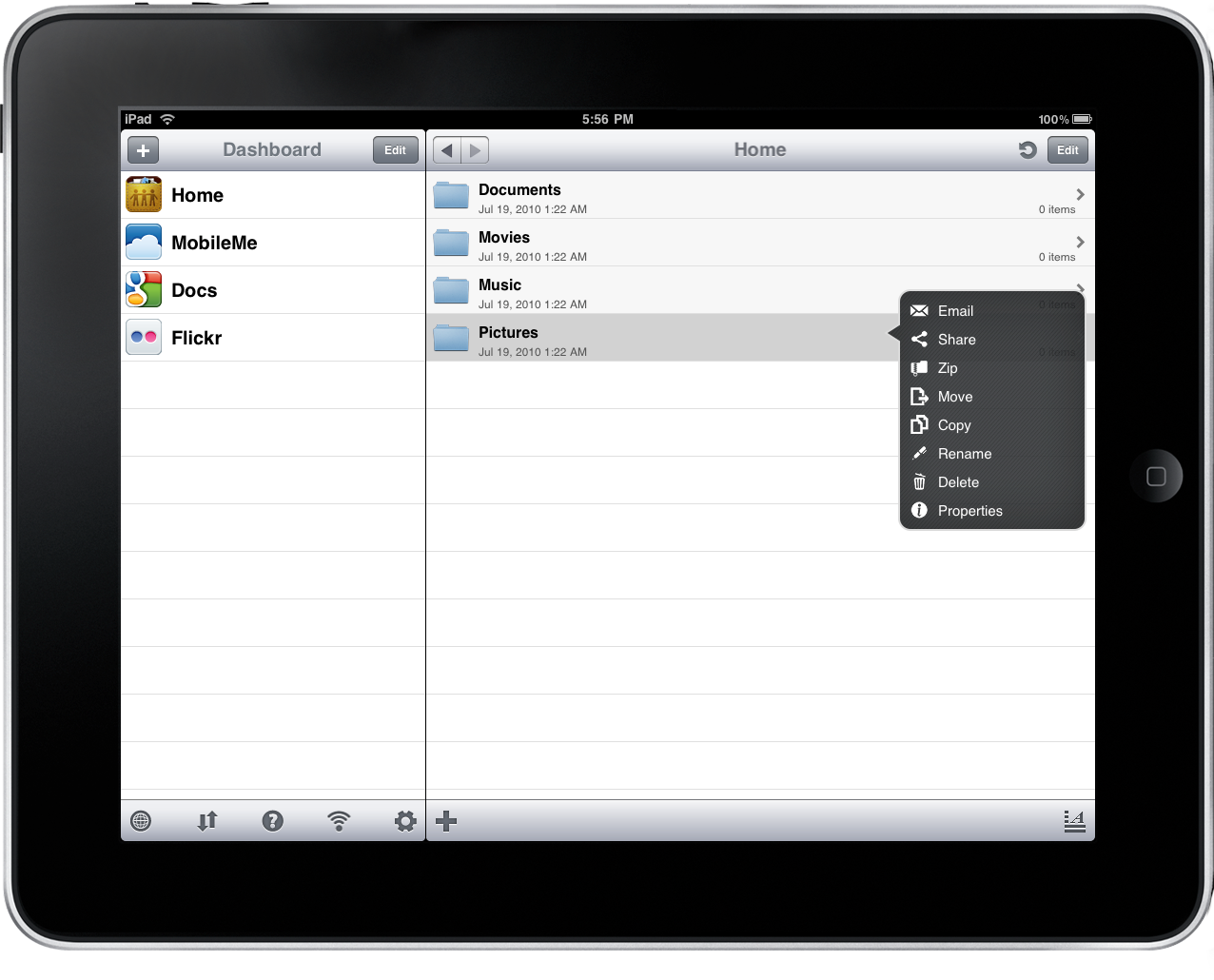 Online services aside, the Home is where you’ll spend most of your time creating and organizing folders, moving files around and so on. Just like in the Finder, but on the iPad. To create files / folders, all you have to do is tap on a + button in the bottom bar: you can create a new folder, a text file, choose files from Library and create a new voice recording. The Library feature is great: thanks to this, every day I can take screenshots on my iPad, fire up iFiles, select the them and, using the built-in web server for local file sharing, download them on my Mac with Transmit from Panic. It’s the perfect workflow for me, and I’ve refined it over time. I used to run Air Sharing HD just for importing captures and move them with the web server, but iFiles is faster than AS at picking files from the Library. Thus, I deleted Air Sharing.

The interaction method with files and folders is pretty unusual and definitely not native. To do stuff with them, you have to swipe (an action that usually triggers the Delete menu) to reveal a contextual menu (contextual menus on iOS?) with all the options to: email, share, zip, move, copy, rename, delete and, this is so Windows, open the “properties”. Which are nothing but a bunch of other options to label, rename (again?), set a passcode lock and change the icon. To move files, you hit “Move” and choose the destination from a modal window. The UI is ugly here. Oh, you can also sort by name, date, kind, size and put folders first.

Also worth a mention are the text editor (pretty straightforward, but useful), the voice recording features and the Settings, which let you customize every single little aspect of iFiles. Really, you’ll get lost in there.

After two weeks of intensive usage I’m very satisfied with the features and the workflow possibilities iFiles offers. It’s a very good first release, with a nice icon and tons of options to set up your own “repository” for local files and online documents. Once the developers will have the bugs fixed, it’ll be just great.

- Plain text with auto-detection of character encoding. Text files can also be edited