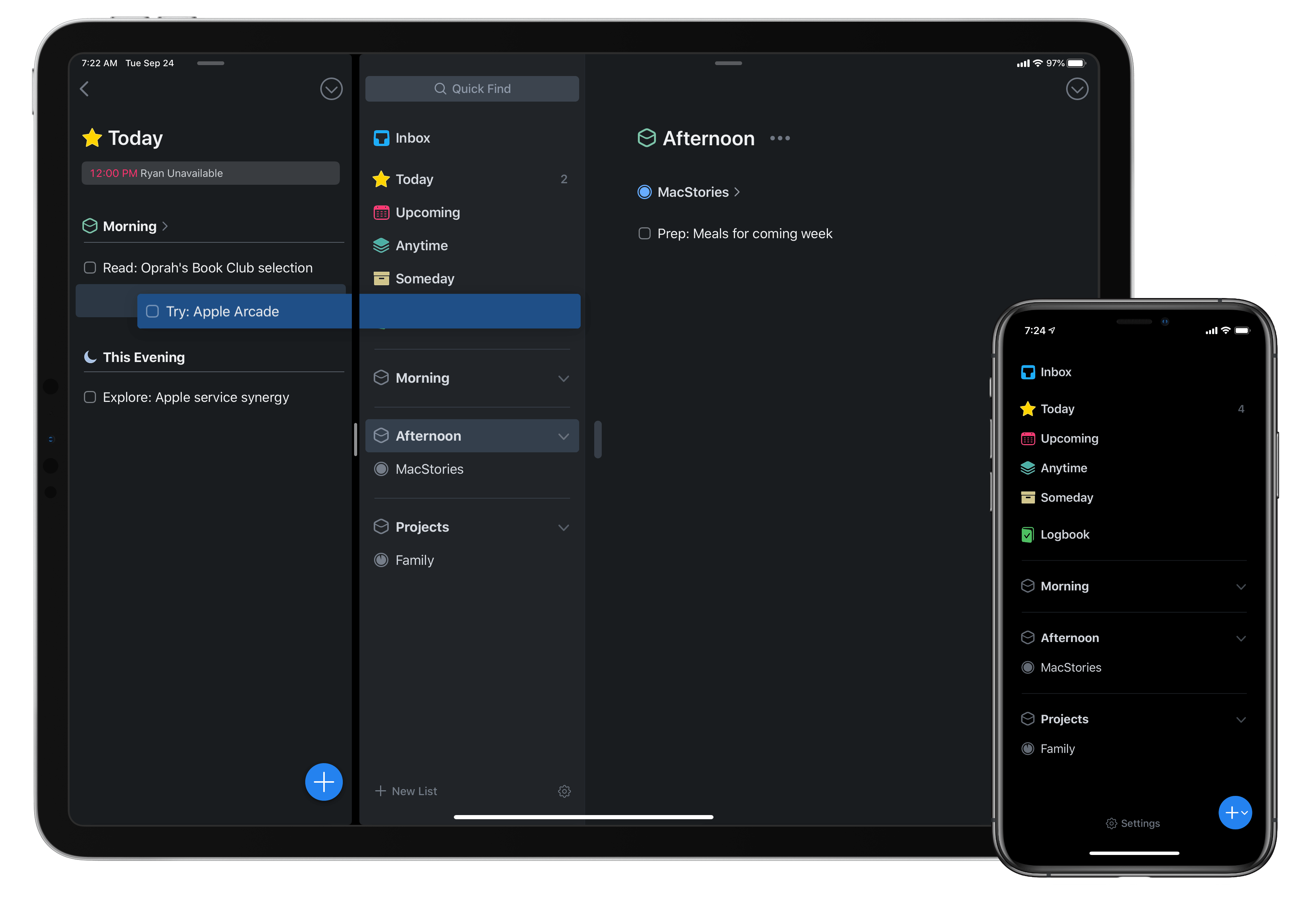 Today as Apple releases iPadOS into the world, Things 3 for both iPad and iPhone has fully updated to add multiwindow functionality on iPad, integration with iOS 13’s system dark mode, shortcuts with parameters, a share extension that introduces key new functionality, and finally a new Reminders Import feature for moving easily all your reminders into Things. There’s a lot to explore, so let’s dive in. 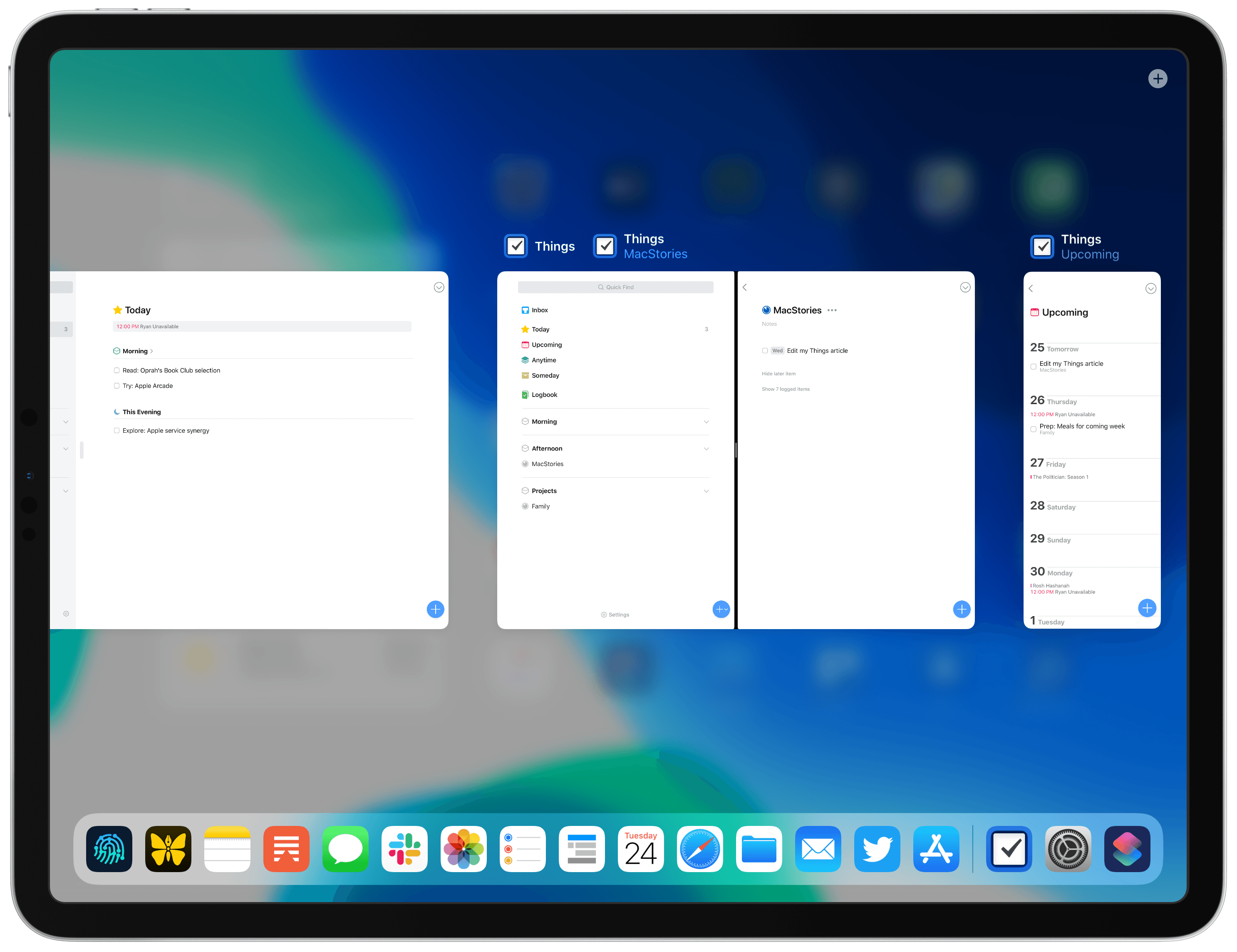 Multiwindow in Things helps mitigate these issues. If you find yourself regularly switching back and forth between, say, your Today and Upcoming lists, you can now keep each open as a separate window. Personally, I like keeping Today open as the smaller app in a Split View so I can keep track of what needs my attention in the present, while storing my Upcoming list as a separate window in Slide Over, so that with a quick swipe I can get a peek at upcoming tasks too. Putting both Today and Upcoming in Slide Over is another great option, because you can easily switch between them now that Slide Over supports multiple apps and the iPhone’s multitasking and navigation gestures.

Regarding adding metadata to tasks, such as assigning them to different lists or due dates, multiwindow can help in that area too. When you have two Things windows side-by-side, you can drag tasks from one window to the other. Even though unfortunately Things still doesn’t support using drag and drop to move tasks into other apps, I’m glad going from one Things window to another is supported. This has enabled me to, for example, drop tasks from my Today list into a particular date slot in Upcoming, instantly reassigning the due date with ease. The same works for adding tasks to a particular Project or Area: just pick up the task, wherever it is, and drop it anywhere in the sidebar to reassign it. This works in a single full-screen window too, but I appreciate the added flexibility multiwindow provides.

The only drawback I’ve encountered is that you can’t pick up multiple tasks at once using touch alone unless you first enter selection mode and pick them all from there; a quicker method if you have a connected keyboard is to use Shift combined with arrow keys to highlight multiple tasks at once, which you can then drag away to move elsewhere.

Speaking of keyboards, Things has some of the best keyboard shortcut support on iPad, and I’m happy to report that the app has adopted multiwindow in a keyboard-friendly way too. New windows can be created using Command-Control-N, you can close a window with Command-W, and there’s even a Command-` shortcut to toggle which Things window is listening for keyboard input.

Things’ dark mode now integrates by default with the system appearance setting you choose in iOS 13, so the app will switch between light and dark modes in tandem with iOS. You can also optionally have Things ignore the system setting and stay in one mode permanently.

Things includes two beautiful dark themes, one named Dark and the other Black. Depending on which option you choose in the app’s settings, that’s the mode that will be triggered by iOS 13’s dark appearance. Though the Dark and Black themes remain largely the same as before, a few tweaks have been made to the way shades present in certain situations like being in Split View or Slide Over. 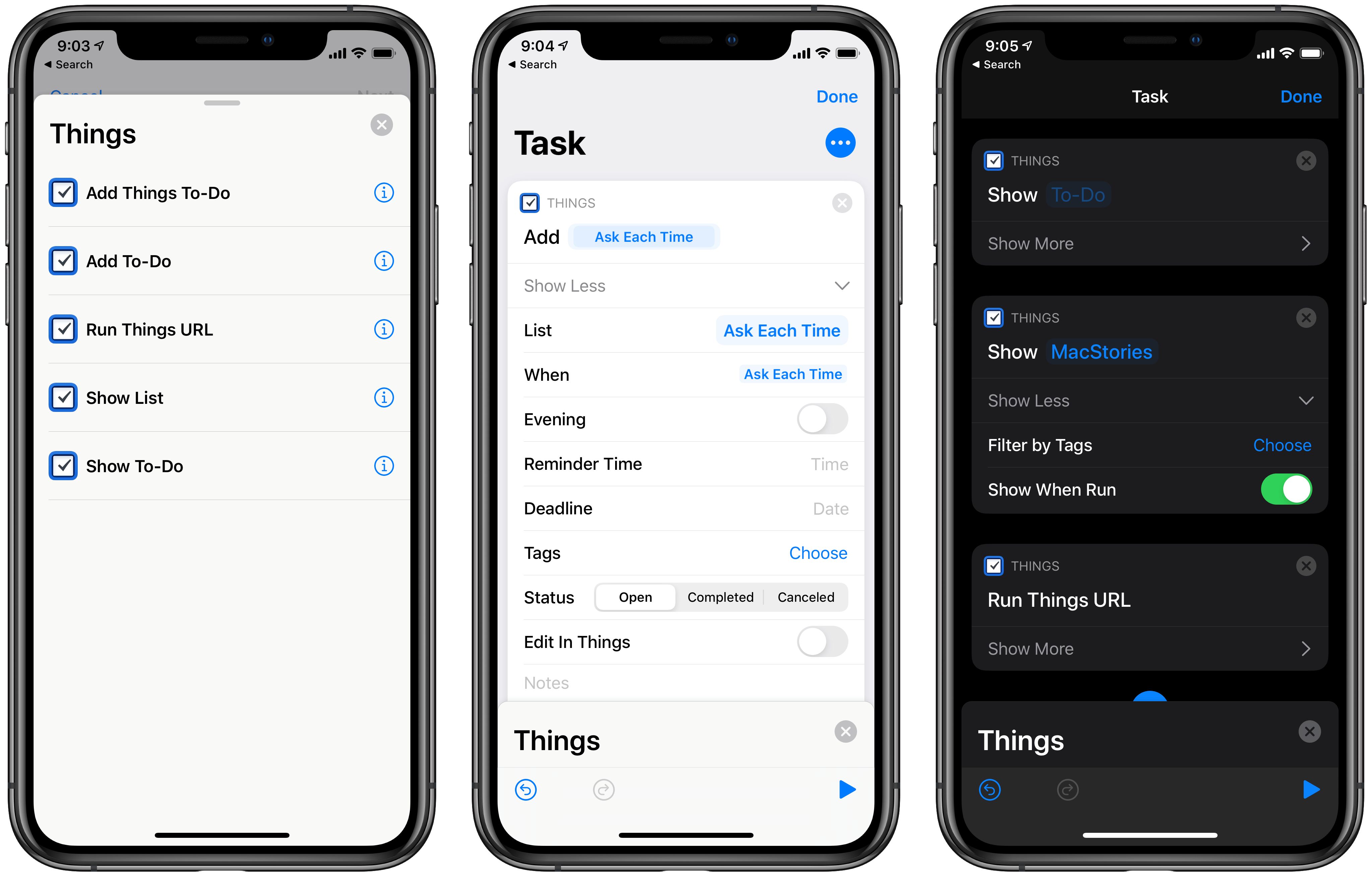 There are four actions supported by Things in Shortcuts:

Each of these fully support Shortcuts’ new parameters, meaning you can more easily modify the various fields of a Shortcuts action without needing to bother with things like variables. Everything is more straight-forward than before, so creating automations no longer feels like it requires scripting experience to get your head around. You can just tap into the various parameters of an action to see natural language options for configuring the action to your needs.

Things also now supports Shortcuts’ new conversational mode with its actions, enabling you to, for example, create a task with Siri and have the assistant ask you for the due date and list you’d like to assign that task: you can have a natural conversation with Siri, just like you might when creating a native Reminders task via Siri. 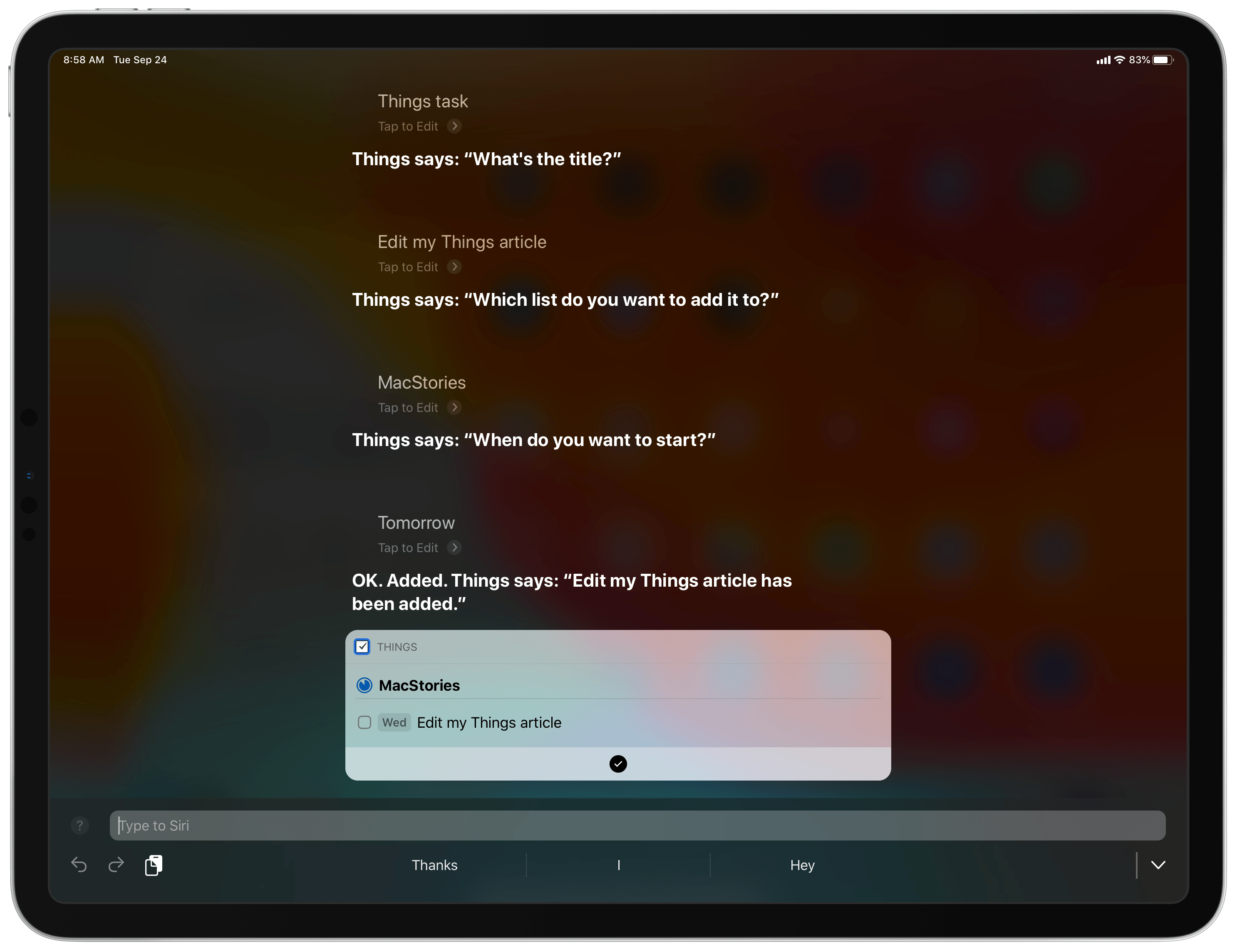 Creating a task with Siri and Shortcuts’ conversational mode.

I have to reiterate my one Shortcuts complaint from last year when Things first added Shortcuts support: because Things has separate iPhone and iPad apps rather than a single universal app, shortcuts you create on one device won’t work on the other. This means you’ll need to double the amount of work you do configuring each shortcut, and if you want identical shortcuts for iPhone and iPad use, you’ll have to give them different names which will make Siri activation more complicated. I understand that offering a universal app isn’t an easy thing, and it doesn’t necessarily make sense for Things’ paid up front business model, but it’s worth stating regardless that the result of separate iPhone and iPad apps is a negative user experience when building and running shortcuts.

Previous versions of Things contained an action extension rather than share extension for capturing tasks from content found in other apps. Now following Apple’s redesign of the share sheet in iOS 13, Things has replaced its action extension with a share extension, which I think is the right move. Besides making Things’ extension identity less confusing than before, the new share extension offers one very important improvement: you can now select which Area or Project to save your new task into, where formerly you had to save it to the Inbox. This one deserves a finally. 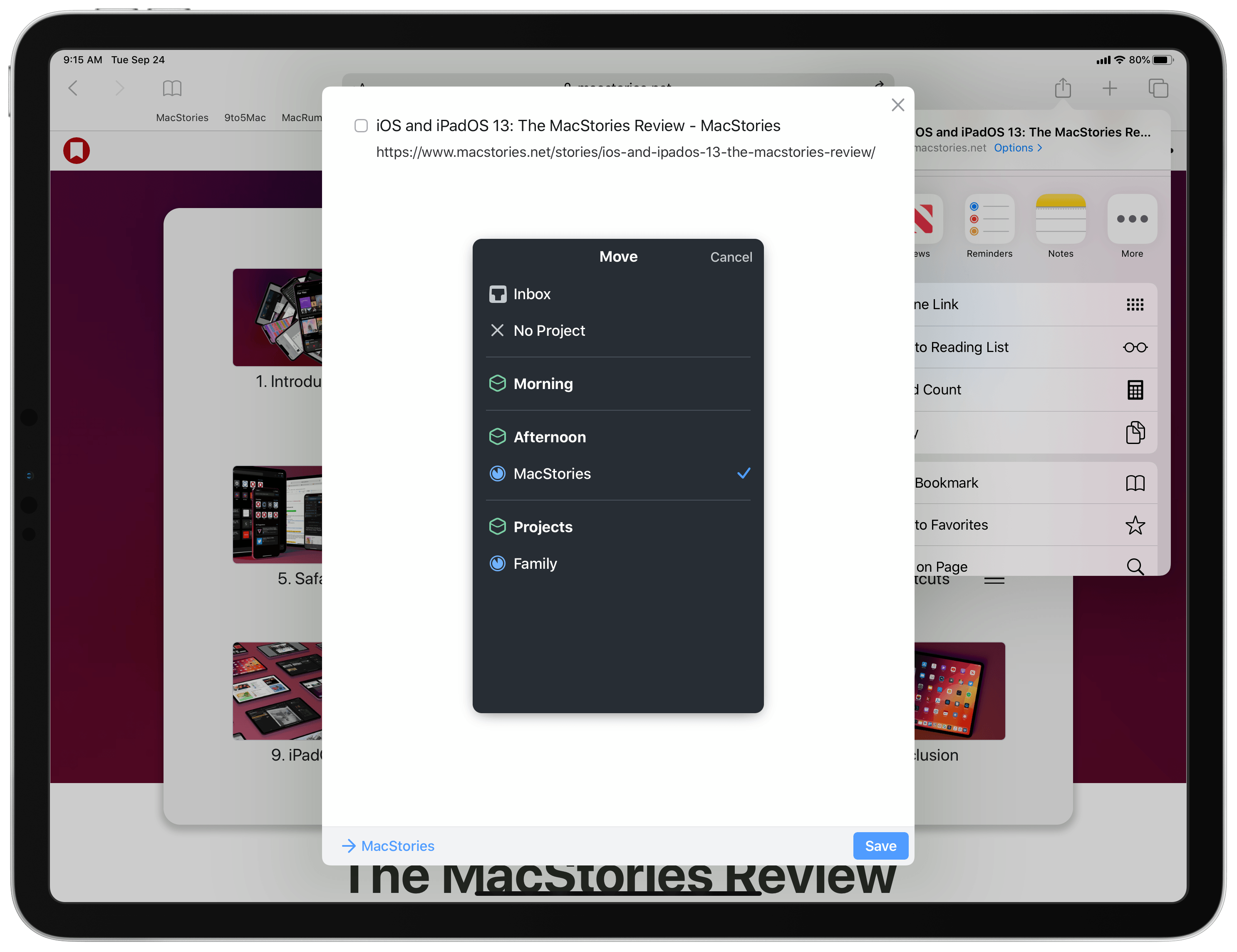 Despite how common switching task managers can be for some people,1 it’s rare to find easy solutions for moving tasks from one app to another. Things has been an exception in this regard with its simple options for importing tasks from Todoist and Wunderlist. Add to that roster a new entry: if iOS 13’s new Reminders app isn’t doing it for you, Things now offers an easy way to move your full reminders database into Things. Just visit the app’s Settings ⇾ Import to get started.

It’s hard to believe that just a couple years ago, Things had a reputation for scoring improvements all too rarely. In the Things 2 era, the app would typically update to adopt new system features, but little else changed throughout each year. Since Things 3’s debut, however, the team at Cultured Code has produced a steady stream of significant improvements to the app, including but certainly not limited to system features. Today’s update is a happy blend of both: all the modern OS technologies that are a good fit for a task manager have been implemented here, along with key enhancements like the new share extension and Reminders import. It’s an impressive release, and one that exhibits Things’ status as one of iOS’ most skillfully developed task managers.

Things 3 is available for iPhone and iPad on the App Store.