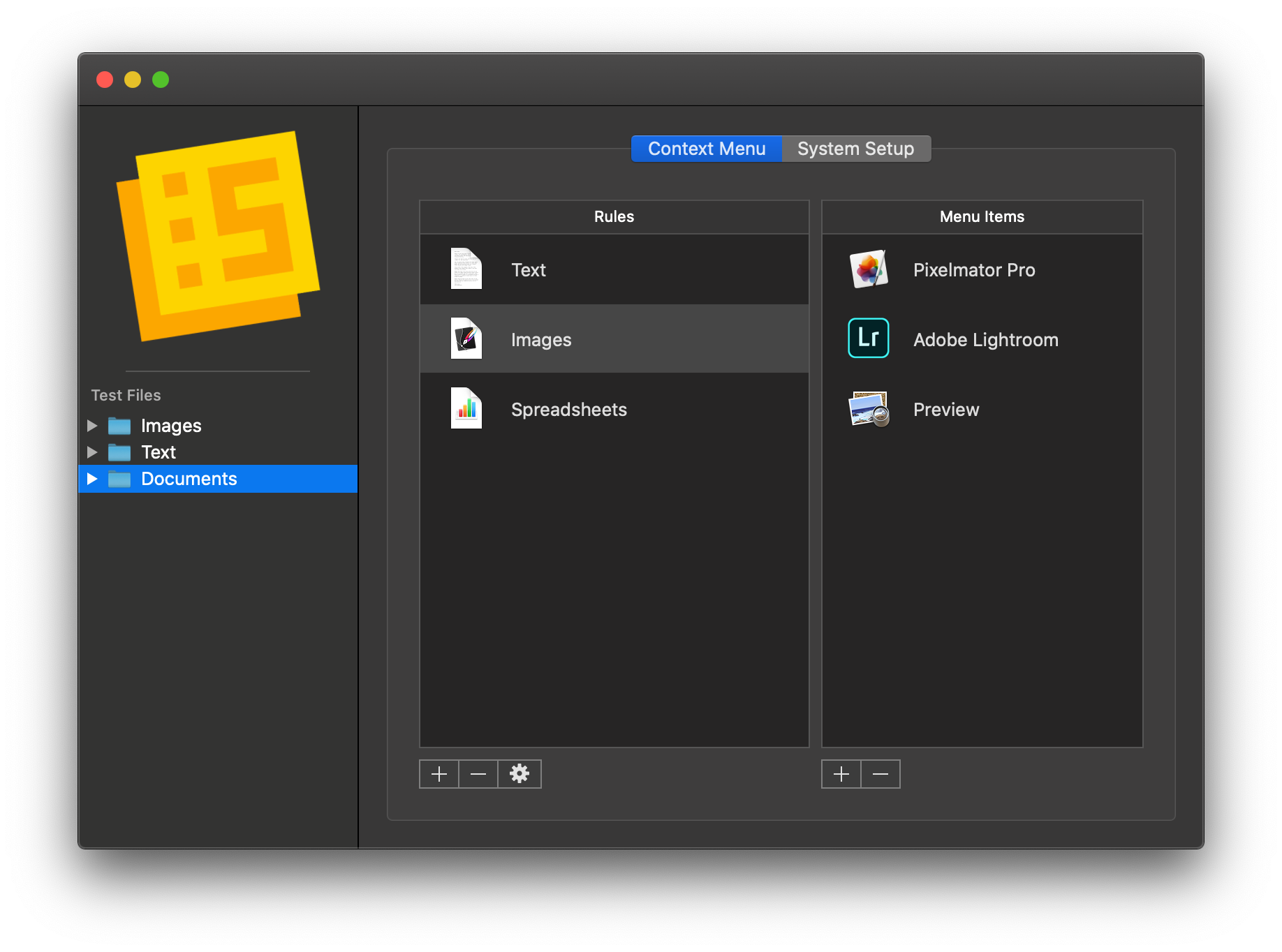 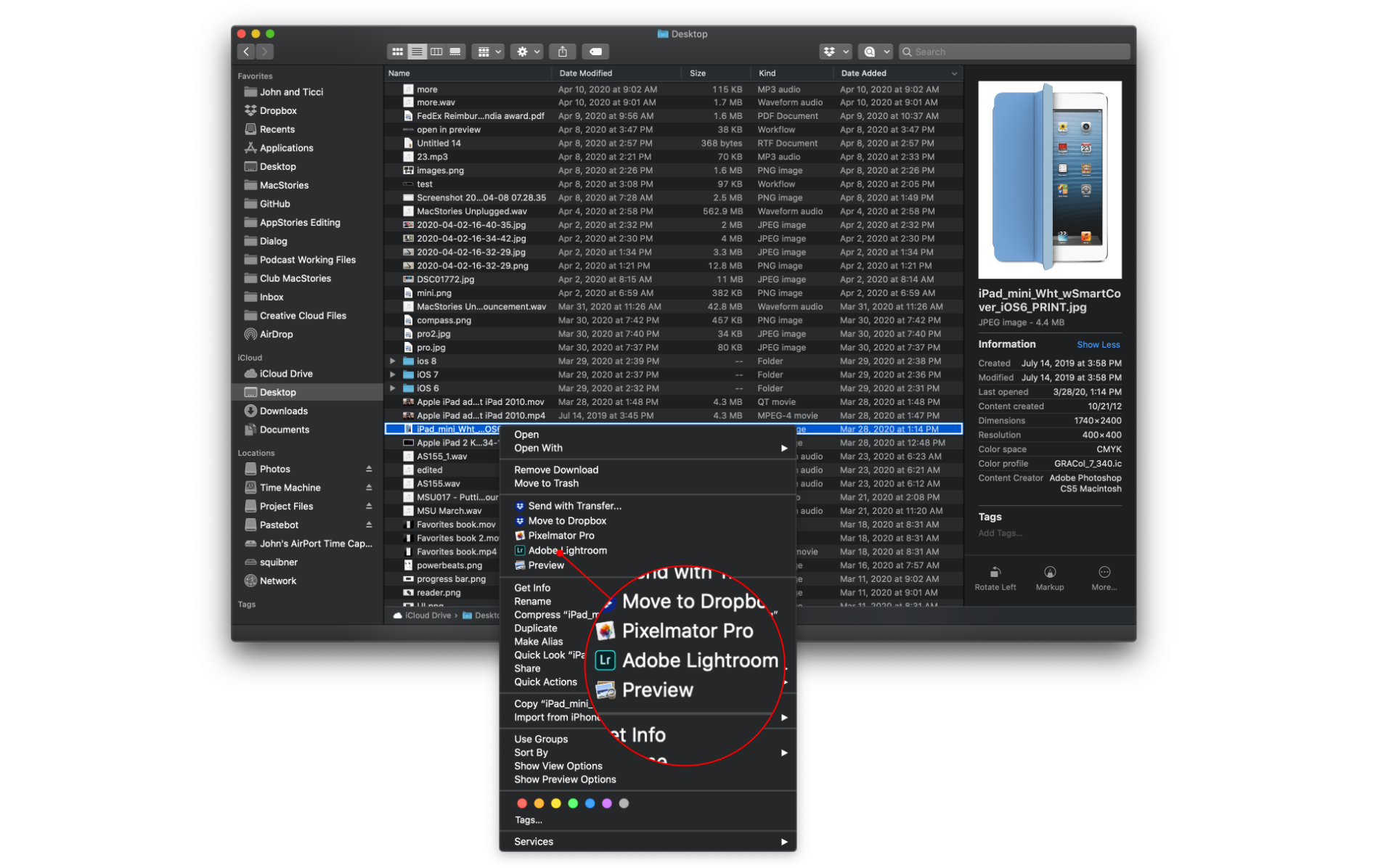 Service Station’s UI is comprised of a single window with a couple of different views that can be toggled between using the segmented control at the top of the window. Although the app is a stand-alone utility, the single-window approach is reminiscent of a System Preferences pane like the one Hazel installs.

The app’s Context Menu view is where you set up rules and menu items. Each rule defines a series of conditions that must be met for the menu items to appear in the Finder’s contextual menu. For example, if I want Markdown files to open in iA Writer, I simply need to click the plus button, name the rule, and define the rule as ‘File extension is md.’ Then in the menu items pane, I click the plus button beneath it, which gives me the option to add an application or script. I navigate to iA Writer, click Open, and my rule is ready to go. Now, whenever I right-click on a .md file, I’ll see an option to open it in iA Writer. 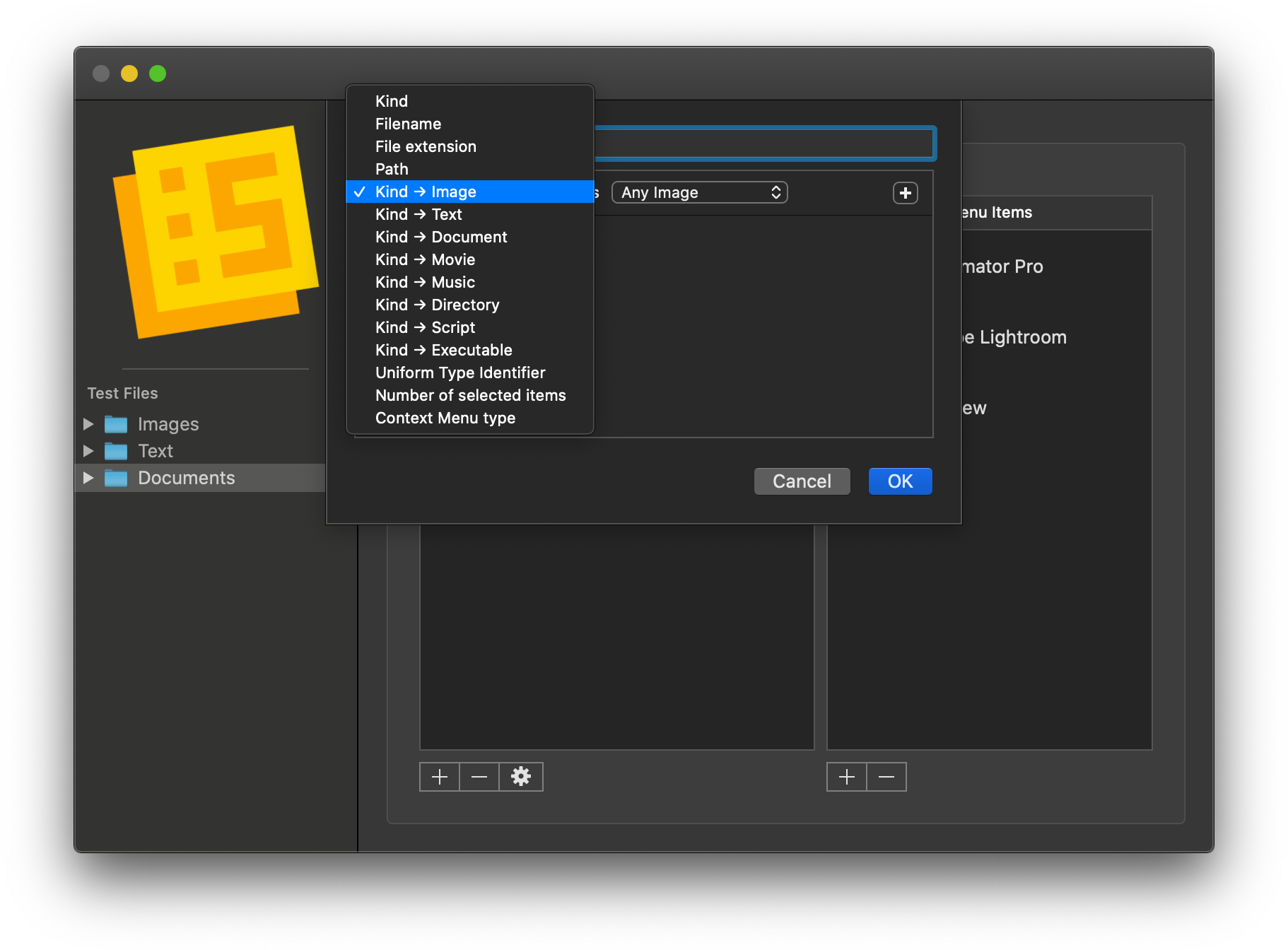 There are a lot of options for setting up rules.

The real power of Service Station, however, is in creating more complex rules because, after all, I could also set iA Writer as the default app for opening .md files. Rules can require that any or all conditions be met for an app or script to be displayed in the Service menu. The rules themselves can be based on Kind, Filename, File extension, several specific file types – including text, music, images, directories, and scripts – the number of files selected, and even the type of context menu that is triggered by right-clicking. Of course, the rule type you pick determines the parameters that are available, and multiple conditions can be added to a single rule, opening up a wide variety of possible rules.

The right-hand pane determines the menu items you’ll see when the rule’s conditions are met. Here you can add a combination of apps on your Mac as well as AppleScript and shell scripts and Automator workflows. 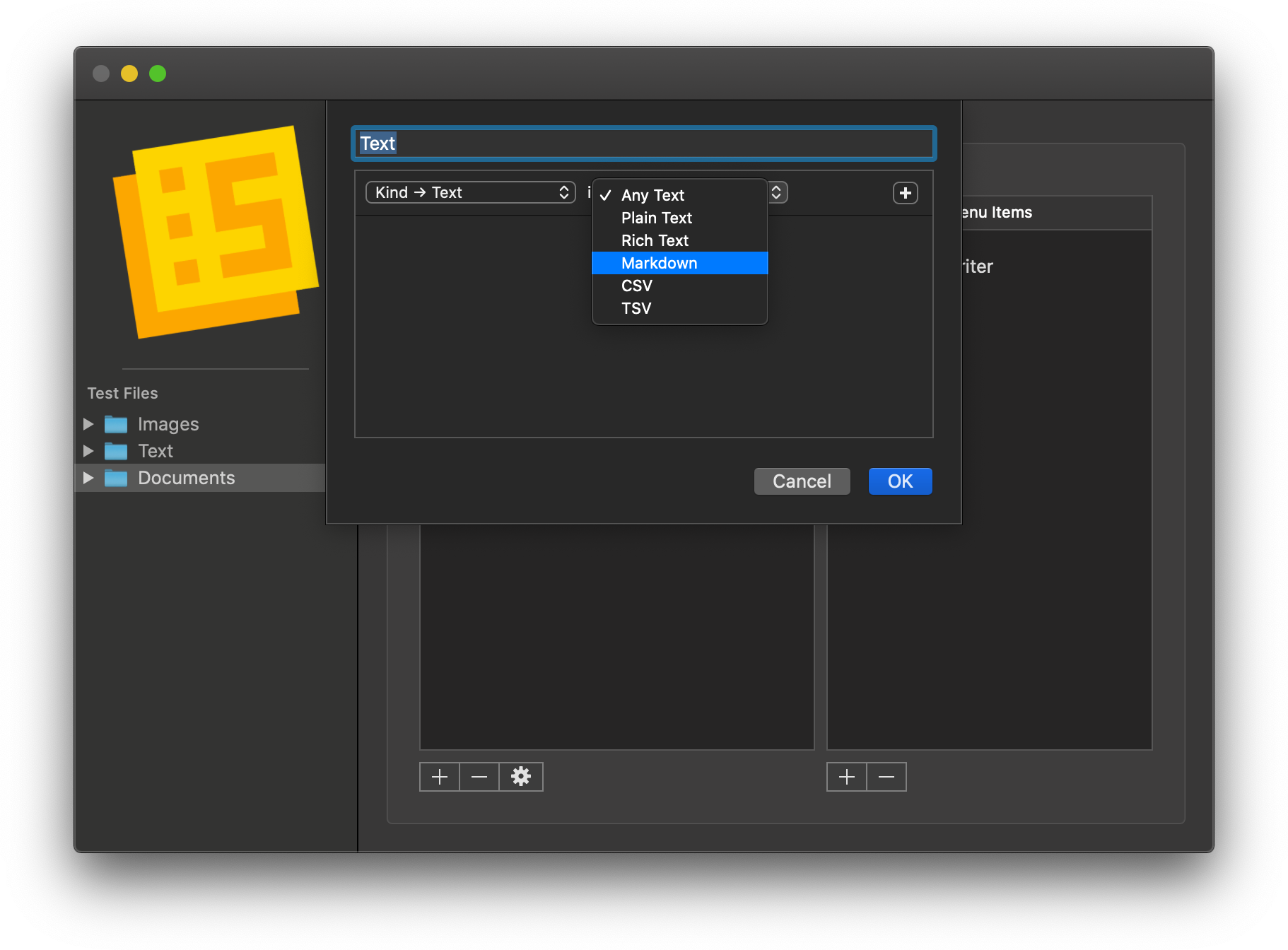 Service Station packs a lot of options that open up a wide range of potential rules.

Service Station comes with a handful of built-in rules for folders, text files, movies, and images. You can edit or remove the default rules if you want, but I suggest clicking the gear icon beneath each one to get a sense of how they are set up before you delete anything. It’s a good way to familiarize yourself with what is possible.

What I like most about Service Station is how it surfaces and consolidates just those items that are important to my work. For example, if I right-click on a PNG in the Finder and select Open With, I’m confronted with two dozen apps I could use. The reality is that there are only a few image editors I routinely use, so I modified Service Station’s built-in sample rule to display options for Pixelmator Pro, Lightroom, and Preview. Now when I right-click on an image, those three apps are displayed near the top of the contextual menu where they are easy to choose, eliminating the need to use the Open With menu and pick from a long list of apps.

The other advantage of Service Station is that you can consolidate AppleScript and shell scripts and Automator workflows alongside the apps you typically use. I haven’t spent a lot of time with this feature yet, but I’m experimenting with using it to surface functionality that I currently access as Finder Quick Actions.

Service Station comes with a couple of caveats worth noting. First, restoring the In-App Purchase across multiple Macs is currently broken. A fix is in the works, but until the app is updated, if you unlock the premium features on one Mac, you won’t be able to unlock them on a second Mac. 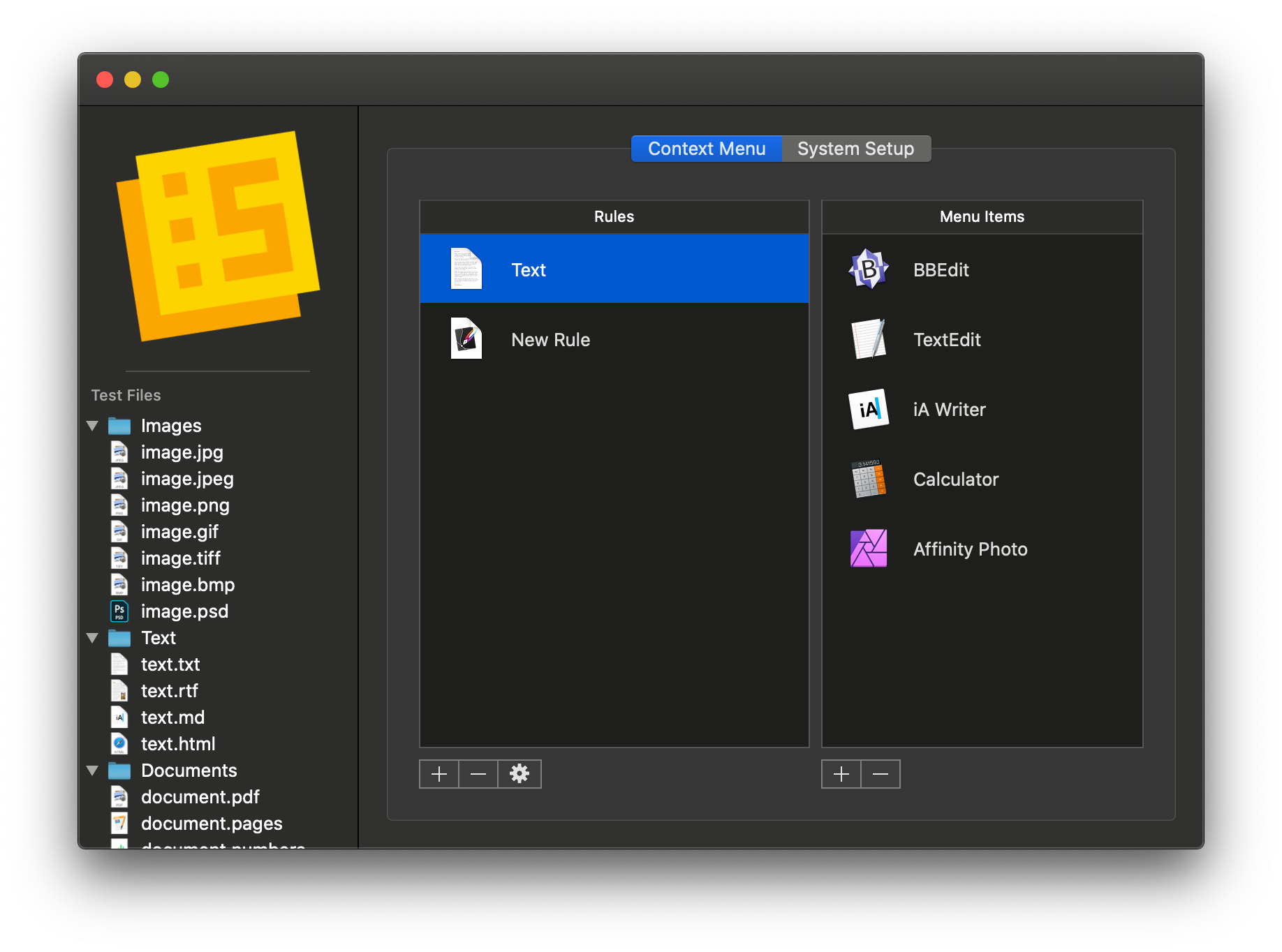 It’s a small thing, but I wish it weren’t possible to assign apps to files they can’t handle, like text files to Calculator or Affinity Photo.

Second, the app allows you to assign file types to apps that can’t handle them. For example, I can assign the Calculator app to a text file. Nothing bad happens if you try to open a text file with Calculator. Your Mac will simply display an error. However, I would prefer it if the app choices you can assign were limited to the files they can handle using Uniform Type Identifiers or some other technique. I’m not sure if that’s possible with Finder extensions, but it would make creating rules easier.

Still, Service Station is the kind of Mac utility I love. I can access its functionality in other ways, but it provides a simple setup UI and consolidation of frequently used apps that make using the Finder’s contextual menu a better experience than before.

The app is free to download on the Mac App Store and use with four rules and three contextual menu items. A $14.99 In-App Purchase unlocks unlimited rules and menu items and removes Service Station as one of the default menu items.